My Doctor Fauci. Video Insights, CoVID19 pandemic. Here we go, back to school to learn biology.

“No person on Earth should be dissuaded in any manner by Charlatans who disingenuously discredit or who steal away the benefit from humankind, the work of eminent scholars.” (Citing a lecture to students at York University, Toronto, Canada, by the author of this article.)

New Zealand’s Jacinda Ardern, Germany’s Angela Merkel, and Taiwan’s Tsai Ing-wen are among the most intellectually agile and compassionate world leaders whose successes have been singled out for praise.

“The world’s most errant leaders like Trump and Bolsonaro, have misled the credulous members of society away from science,” say many scholars. They in turn attack the scholars.

“If we listened to him [Dr. Tony Fauci], we’d have 700-800,000 deaths right now,” Mr. Trump said at a rally where he launched into a psychological warfare diatribe  against science which makes Hitler look like a mere beginner at fascism.

“Trump’s theory would indicate an unattainable  CFR for COVID-19 unless all Americans were over 90 and had serious underlying chronic comorbid illness,” says Fred Harris, a biostatistician working in Singapore.

This article features a video compilation to deliver a précis recommendation to a worthwhile lecture series on the novel coronavirus SARS-CoV-2 and the COVID-19 disease that SARS2 causes.

The Video: “Insights into the COVID-19 Pandemic by Dr. Anthony Fauci”

Let’s go back to school and learn biology at MIT

Two reasons for the sudden need to study biology. 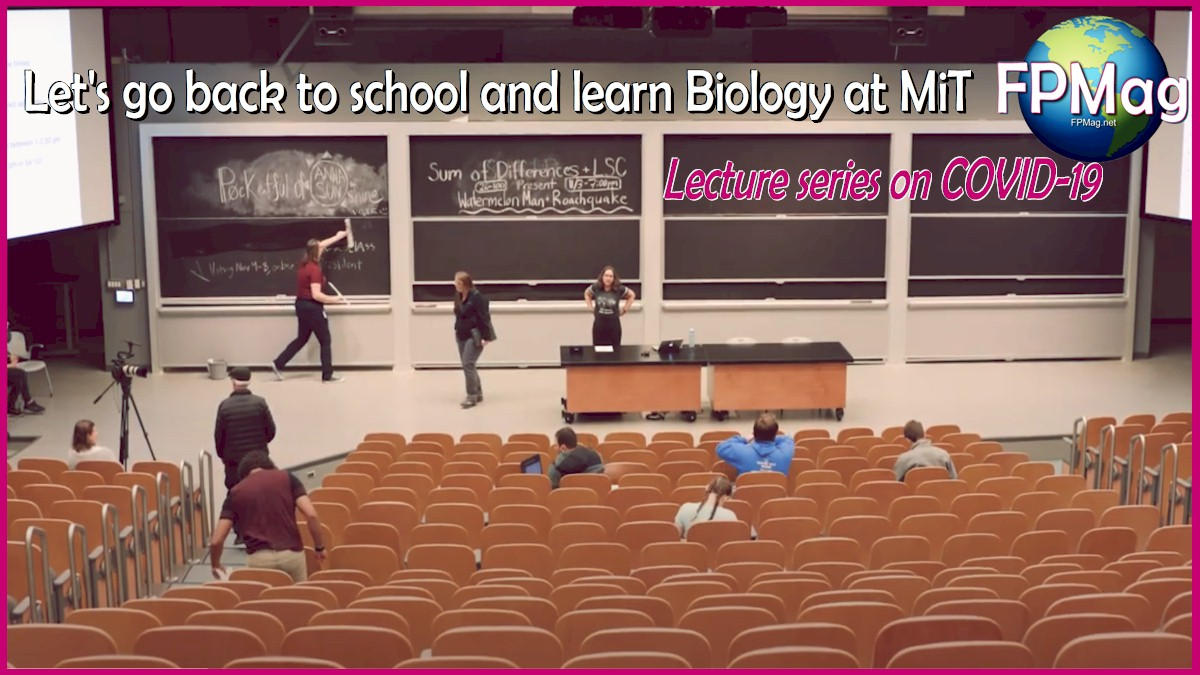 The class covers the structure and regulation of genes; the structure and synthesis of proteins; how these molecules are integrated into cells; how cells are integrated into multicellular systems and organisms; and computational and genomic approaches to biology. Special thanks to Professors Cathy Drennan and Eric Lander and students Madeline Kline, Alice Zhou, Alex Evenchik, Andrea Orji, and Boluwatife Akinola. Photo Credit: MIT/Biology ~  Additional graphics:  Rosa Yamamoto FPMag

The picture and its story: “Let’s go back to school and learn biology at MIT”
What does biology entail at MIT? As an undergraduate, you will complete the Biology General Institute Requirement (GIR). Students will learn about climate change and its impact on all species; infectious disease and the evolution of the human species and others in competition with pathogens; and much more.

Two reasons for the sudden need to study biology.

2. The world’s most despicable authoritarian leaders have misled the credulous members of society away from science.

Senator Mitt Romney told reporters this week, “Dr. Fauci is an esteemed professional who has served our country extraordinarily well. And I think the American people have a great deal of confidence and faith in him.”

This followed an ill-mannered Donald Trump behaviour, not much unlike a soon-to-be-expelled kid in school. Trump vulgarly attacked the 31st most cited researcher of all time according to Google searches.

It’s true. Among Google scholar citations, Dr. Tony Fauci MD ranked as the 31st most highly cited researcher of all time. He ranks 7th out of more than 1.8 million authors in the field of immunology by total citation count between 1980 and January 2020.

This video starring Dr. Fauci is a précis of a lecture edited for the lay reader, including graphic assists.

Scientific data for university undergraduates on the subject of biology and the COVID-19 Pandemic are equally suited to the average person in any community today that is impacted by the pandemic.

The course in which Dr. Fauci is delivering a lecture is led by Professor Facundo Batista, Associate Director at Ragon Institute of MGH, MIT and Harvard.

Links are provided for the entire MIT course or the MIT Lecture Series Live Stream.

The video above, featured in this article includes an excellent introduction to the man, Tony Fauci filmed by VOA Learning, and is followed by Dr. Fauci’s lecture, “Insights from the COVID-19 pandemic” prepared and delivered for the fourth part of an MIT  series led by Dr. Facundo Batista.

Why this Video is Important

“Whatever it is that people in America do not know, that led the country into the abysmal out-of-control infection rate it finds itself in today, the people need to learn,” says Dr. Harris of the  Civil Society Partners for Human Solidarity against COVID-19 biostatistical tracking team.

“This dangerous pandemic must be halted in its slaughter of Americans and other nationalities worldwide. The human species is impacted as a whole by what any one community does in fighting this infectious disease,” he added.

“A look at these numbers tells us not only that this disaster is caused by atrocious leadership but more than that, it is extremely dangerous because it is out of control,” Harris adds.

SARS-CoV-2 is beginning to reinfect previously asymptomatic patients and their outcome, based on early observations is much worse. The infection fatality rate among reinfected patients is extremely high thus far. Not much more than that is known.

Today the CoV ‘actual v reported‘ death toll is over 300,000 souls in the USA. This graph explains how there will be One million American deaths by mid-spring 2021 from COVID-19

Today the death toll is over 300 in the USA. This graph explains how there will be One million American deaths by mid-spring 2021 from COVID-19 Click to enlarge. Data source: The Civil Society Partners for Human Solidarity against COVID-19  Additional graphics:  Rosa Yamamoto FPMag

Biographies of the key scholars referenced.

The following excerpt from the NIH biography for Dr. Anthony Fauci

Dr. Facundo D. Batista is the Phillip T. and Susan M. Ragon Professor of Microbiology and Immunology at Harvard Medical School and the Ragon Institute of MGH, MIT and Harvard. He also serves as the first Associate Director of the Ragon Institute and Chief Scientific Officer.

Professor Batista is a world leader in the study of B-cell immunology and antibody responses. Historically, his group has focused on understanding B-cell receptor (BCR) function, including BCR signaling dynamics, inhibitory and stimulatory regulation by co-receptors, and interactions with the cortical cytoskeleton.

Video: A glimpse into the MIT Biology Programme, source for much of the information in this article.