“Without a doubt, Michigan has the strongest leadership of any state in the Union and that is no surprise,’ says Monique Deslauriers, Executive Director of RINJ Women (USA).

“Michigan has Gretchen Whitmer as Governor,” she adds.

The humanitarian feminist leader explains by citing the successes of 30 nations led by women which have had a shining success in dealing with numerous global crises including the current pandemic.

“MichiganVoting.org’s online “Plan Your Vote” tool, is a unique web-based resource that allows Michigan voters to quickly select their preferred method of voting,” she explains. “But that’s not all.”

[ It can be found at:  https://www.michiganvoting.org/plan-your-vote .]

“There is also an Election Protection hotline (866-OUR-VOTE/ 866-687-8683) which according to Lt. Governor Garlin Gilchrist II, is staffed by trained legal professionals from 9AM to 9PM Monday through Friday, and on weekends from 10AM to 4PM,” adds Monique.

This article shares how a woman-led US State is combatting a patriarchal menace that allegedly suppresses US voter’s rights and allegedly subjugates democratic processes to advantage Mr. Donald Trump and his business associates.

“The trouble we are having with this 3 November election in the United States seems to be a voter suppression effort coming from the reckless presidency of Donald Trump. I am no expert on running elections but I have talked to the professionals in my own state and they cite several problems,” says Monique Deslauriers, Executive Director of RINJ Women (USA).

“The President’s lawyers or in the alternative, lawyers representing Mr. Trump, have been in the courts working on restricting ballot drop boxes to a single location for every county in as many states as they can force to do that. In some cases, state leaders favorable to Donald Trump or under his control by other means unknown, are issuing instructions to restrict ballot drop boxes while in some cases Courts are denying the move. Donald Trump is reportedly making a very big mess. Some reporters say he has admitted that he will sabotage the election. That is what my contacts in the Maine election system are telling me,” Deslauriers explained.

“Another issue is the white supremacist armed gangs of terrorists that were arrested while trying to kidnap state officials and the same kind of people that newspapers say Donald Trump is trying to encourage to become poll station ‘watchers’. This sounds like intimidation. Both my father and my grandfather have said that never before in their time were people encouraged in America to bring a gun to the polling station by a president. I am not sure Trump told people to bring guns but he did tell people who normally carry guns to his protests and rallies to got to the poll stations,”  she adds.

“And one more very worrisome Trump campaign for voter suppression is claiming that mail-in votes are very bad.

“Well, I trust US Postal Services with my mom’s life-saving medicine so I will surely trust the mailman with my ballot. Postal workers have been screaming out that something is wrong and that Trump’s appointee has been throwing out mail sorting machines. Trump keeps saying over and over that mail in ballots don’t work and he hired a guy from his campaign to allegedly run the USPS into the ground and slow down the mail.”

“I am glad FPMag is doing a story on the Michigan efforts to pushback against the White House voter suppression,” said RINJ (USA) Executive Director”

White House voter suppression”  That might be a once in 200 years headline.

On Saturday Michigan Lt. Governor Garlin Gilchrist II Marched to the polls & Voted Early in Detroit to highlight voting locations across the city:

“For every voter in Michigan, voting early is your right, and we want every Detroiter to know that no matter where you live or what your circumstances are, you have more options than ever before to make a difference in this election,” Lt. Governor Gilchrist said.

“With 23 satellite voting locations and 30 ballot drop-boxes standing by to receive your absentee ballot between now and Election Day, make your voting plan today, and make sure that your voice is heard.”

“Starting now until Election Day, the Detroit satellite offices will be open,” the Lt.Governor explained through a bullhorn. 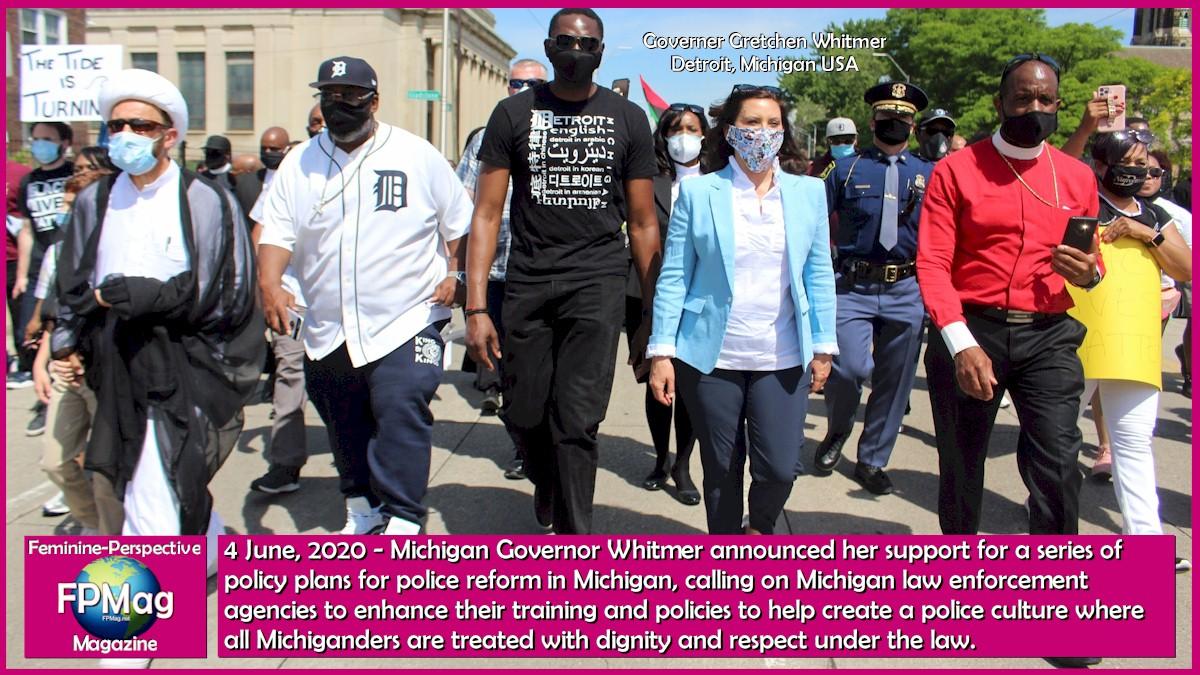 “Cohesion Morale in Michigan is very strong. All leaders work together for the common good of Michiganders,” says a retired US Marine, FPMag spoke to by phone. Photo Credit: Courtesy office of Governor Gretchen Whitmer, 4 June 2020 Art/Cropping/Enhancement: Rosa Yamamoto FPMag

Watch: Governor Gretchen Whitmer shows drive and resolve in combatting White House Voter Suppression and the Criminal Charges Against Terrorists accused of a kidnap and possible murder plot against the Governor.

More about voting in Michigan where Governor Whitmer’s mantra is  “Make Sure your voice is heard: VOTE and VOTE EARLY” 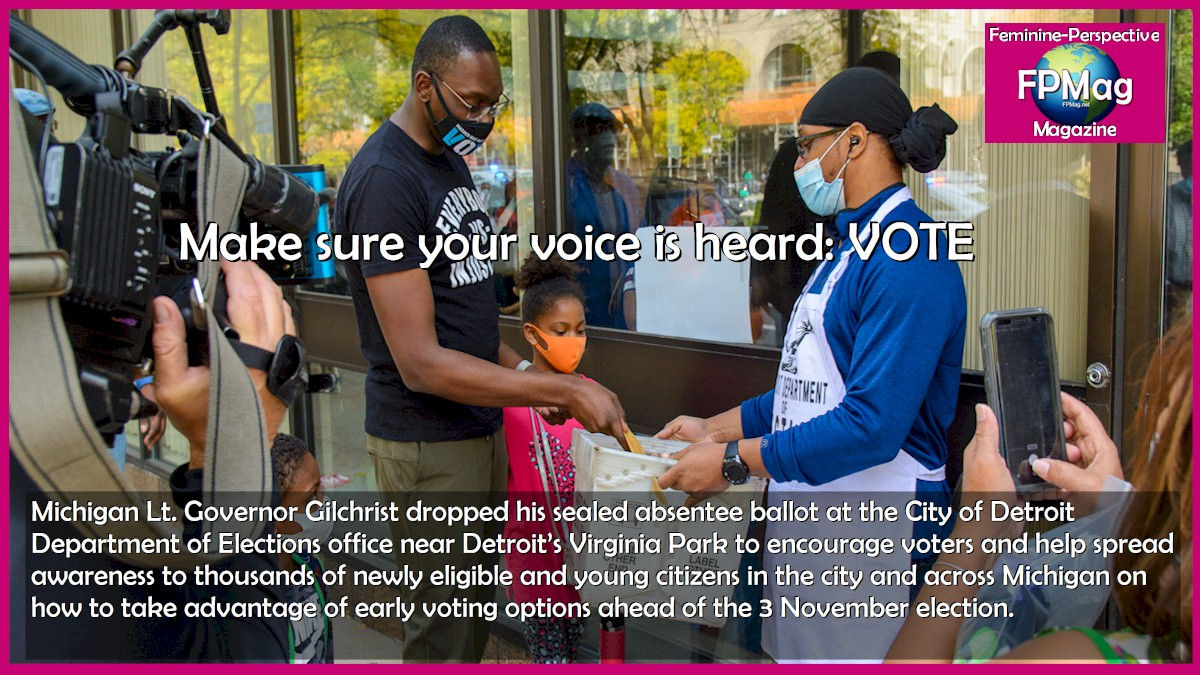 Michigan Lt. Governor Gilchrist dropped his sealed absentee ballot at the City of Detroit Department of Elections office near Detroit’s Virginia Park to encourage voters and help spread awareness to thousands of newly eligible and young citizens in the city and across Michigan on how to take advantage of early voting options ahead of the 3 November election. Make sure your voice is heard: VOTE.  Photo Credit: Michigan Executive Office of the Governor · 111 S. Capitol Ave · Lansing, Michigan 48901 Art/Cropping/Enhancement: Rosa Yamamoto FPMag

Lt. Governor Gilchrist explained at a presser the following details to Michigan voters.

Here is what he said:

“Voters can print and submit a paper application for an absentee ballot for the Nov. 3 General Election.

“The Secretary of State’s online application for an absentee ballot is available at https://mvic.sos.state.mi.us/avapplication.

“Now [10 October 2020] through Nov 2 at 4PM: Already registered voters can vote early at their city and township clerk’s office(s) for the Nov. 3 General Election.

“Oct. 19: Last day to register to vote online or through the mail for the Nov. 3 General Election. Get registered to vote asap and do it online at www.michiganvoting.org, if you can.

“Starting on Oct. 20 through 8PM on Election Day: you must register to vote in person at your city or township clerk’s office and provide proof of residency. Once you are registered, you can vote, all in one trip.

“Weekend of Oct. 31 – Nov. 1: Clerks’ offices must be open for at least eight hours for in-person absentee voting. Check with your local office to find out when they will be open. Find your clerk at https://mvic.sos.state.mi.us/Voter/Index/#yourclerk

Nov. 3 – Election Day: Michigan Polls are open from 7AM to 8PM local time.

For more information on mail-in ballots, same-day registration or ways to safely cast your vote before election day, visit www.MichiganVoting.org