When you text four American mom’s and ask, “What would you like to tell your President today?”

Women are very often the centerpoint in any family. Moms are the glue which holds families together. In the mornings it’s often mom who is organizing children’s events including school, preschool, daycare, babysitters—“don’t leave home without breakfast”, they say as they are putting out the day’s clothing for the kids; dad’s shirts from the cleaners—and so on.

The current pandemic has made those loving tasks nearly a nightmare.

Moms are working harder than they ever did before in their lives, at anything. Even if their last job was in the salt mines, this job is harder.

What moms don’t need is a petulant teenager’s White-House-invigorated-squawking that they “will not wear a mask” because the President doesn’t.

And, “Why can’t I go hang out with my friends? The President hangs out with dozens of people at a time all hugging, dancing and high-fiving without masks.”

And, “Why don’t we stop paying taxes and then you could buy me the new gaming computer I want.”

And Trump wonders why suburban women don’t like him.

“Actually it is much worse than that. It’s billions of women who don’t like Trump, says Katie Alsop of The RINJ Foundation. “And this is not kid’s stuff, so if they are looking over your shoulder, send them away.”

“Consider that statistically it is estimated that among women and girls around the world, at least one in four have experienced sexual violence and more than 80% have experience sexual harassment of one kind or another. A woman who has been raped is not going to like a boastful rapist, in the blankety blank White House,” she reasons.

“Trump is an accused rapist, and an admitted sexual predator,” says a women’s shelter counsellor who has spoken to women who were as children, models in the clutches of Jeffrey Epstein, Donald Trump and other celebrities. The counsellor does not want to be identified for fear of triggering the survivors.

In the following video, Trump admits to being a sexual predator

No. Women do not like Donald Trump. His failure as an ethical human being; his failure to lead; his lack of empathy has caused the deaths of sisters; killed moms and grandmothers. This man has been exactly what Dr. Bandy X. Lee has claimed he would be.

Serene Lin wrote, on 13 May 2020, in the Yale University Daily News, “I never really thought of speaking up about a president as something that would be my role,” Dr. Bandy Lee told me. “I was uninvolved in politics until politics invaded my area.”

“Since the 2016 election, Lee [Dr. Bandy X. Lee] has spearheaded a movement to shed light on what she believes is the dangerous mental condition of the president.

“Last December, as the presidential impeachment proceedings came to a head, Congress received a petition led by Lee and two other mental health professionals. The statement accompanying the petition claimed that the president’s mental fitness was rapidly declining.

“In the petition signed by 350 other health professionals, the trio wrote that the President had the “real potential to become ever more dangerous, a threat to the safety of our nation.”––Yale Daily News,

The pandemic is not “ending”, it is “starting”, say experts.

The data for the following four graphs are from the very first tracker of the Novel 2019 Coronavirus in China and Thailand, even before the end of December 2019, the Civil Society Partners for COVID-19 Solidarity.

“Unequivocally the pandemic is not ending for years. At the present time it has barely begun. For the United States, the pandemic will cripple the country on its present course to a million deaths by April 2021, if the Americans do not start to wear masks, socially distance themselves from others,  and maintain a higher level of personal hygiene, particularly hand hygiene and the cleaning of every thing people touch,” says Dr. Harris.

As FPMag published on 13 October, antibodies in persons infected this year are wearing down and re-infection with COVID-19 creates a new comorbid underlying illness: COVID-19 itself.

“There may have been millions of reinfections if the global hundreds of millions of asymptomatic infections are to be counted. We will never know,” says expert.

“We don’t know how many people have been reinfected. Persons with very mild or asymptomatic cases of the disease would be the first candidates for renfection as they would have only short-lived resistance to the SARS-CoV-2 virus. Because they were likely among the many millions in America who never showed any symptoms, doctors do not know they are reinfected persons,” says Fred Harris, the team lead biostatistician of the Civil Society Partners for COVID-19 Solidarity team.

So far there has been one death from a known reinfection; one critical care hospitalisation of a reinfected patient, and several very sick people.

“It was an 89-year-old woman in the Netherlands who died after being infected with the coronavirus for a second time. We don’t know if this is the first death of a reinfected patient because we simply do not know how many people have been reinfected,” he added.

“Our estimates indicate that today,  5.4% of all humans (421 million in rounded numbers) have been infected but that is the most modest estimate we have heard. The World Health Organization thinks that number could be doubled.”

“What we don’t know about reinfection is how much of a comorbid event that would be to the first course of the virus and what would that be like if the genome sequence is not the same,which seems likely given the preponderance is slightly variant sequences?”

“It could be a growing percentage of fatalities because conceivably, as SARS2 re-infects a patient, it is storming pulmonary and other cells within an immune system that is damaged from the first, second or third infection.“The urgent fact remains that whatever it takes, this SARS2 virus must be stopped by any means. If it continues re-infecting the surviving patients and kills an IFR of .6-.9%-?%-?% — survivors will become weaker and humans fewer with every wave of the virus, until we are all gone?

“There are many things we don’t know. But in what we are saying today you will learn what we must be preparing for and know that the fight is on. We must beat this virus.”

This is the First Wave of the COVID-19 Pandemic, Still Rising 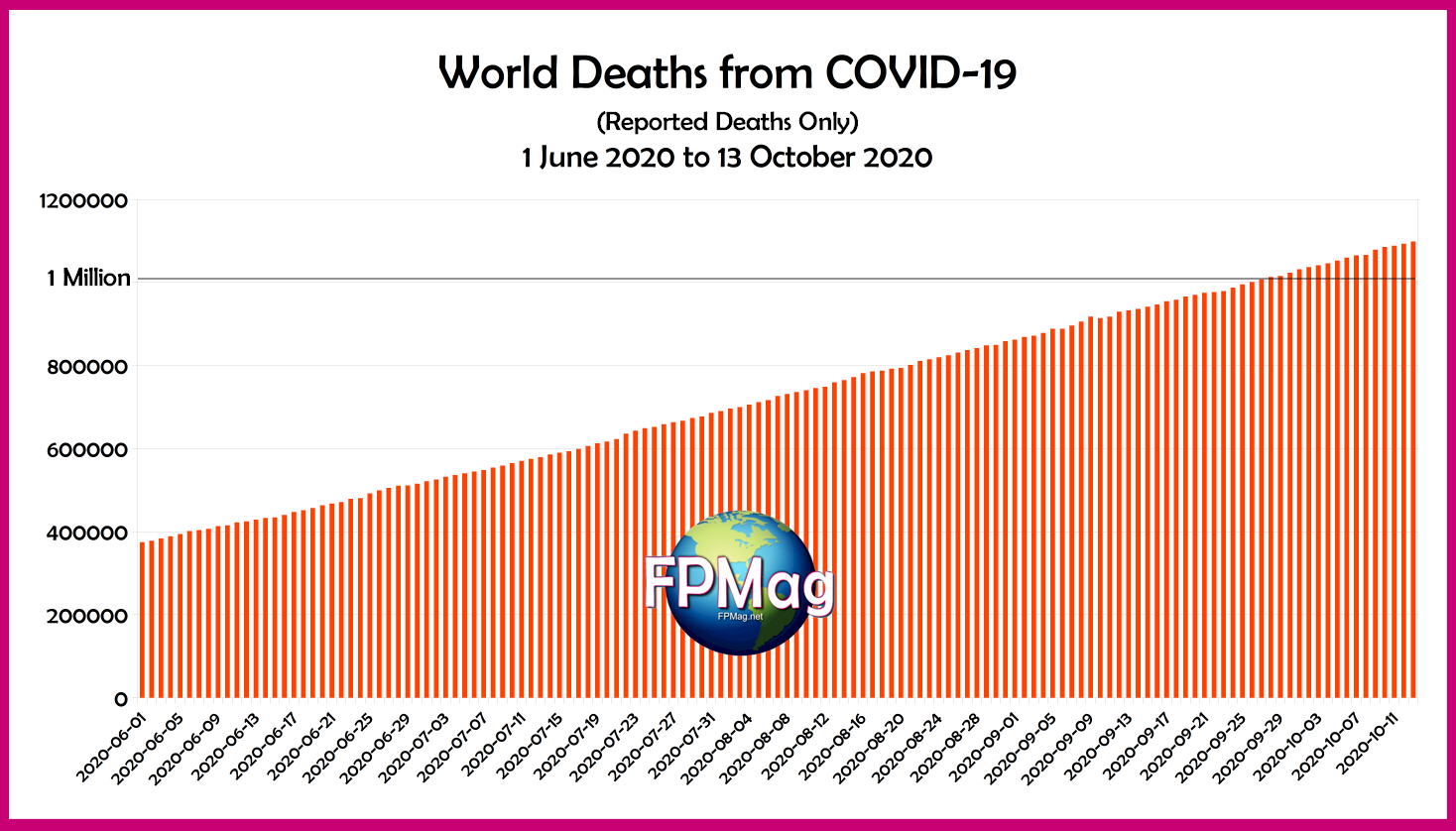 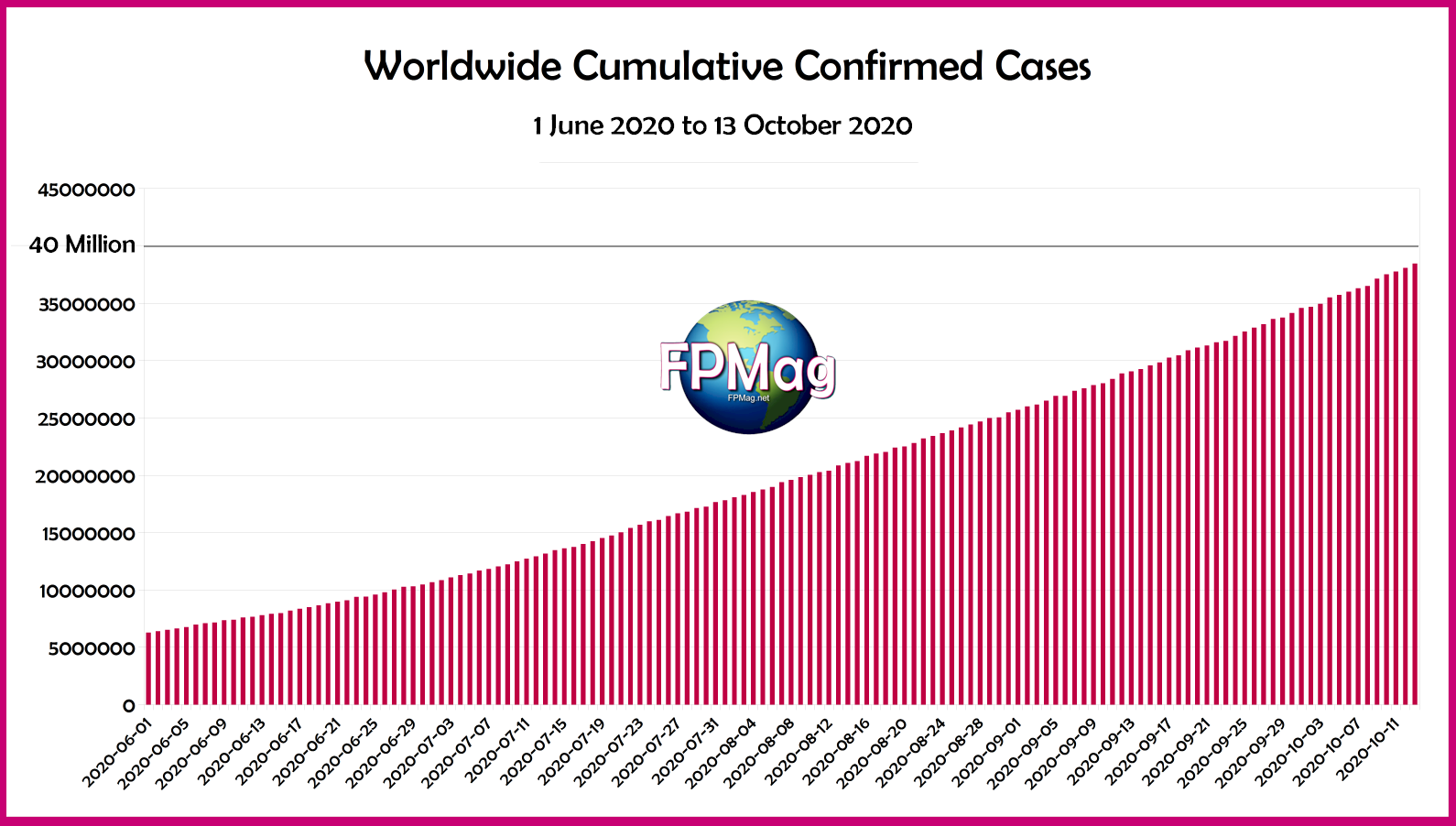 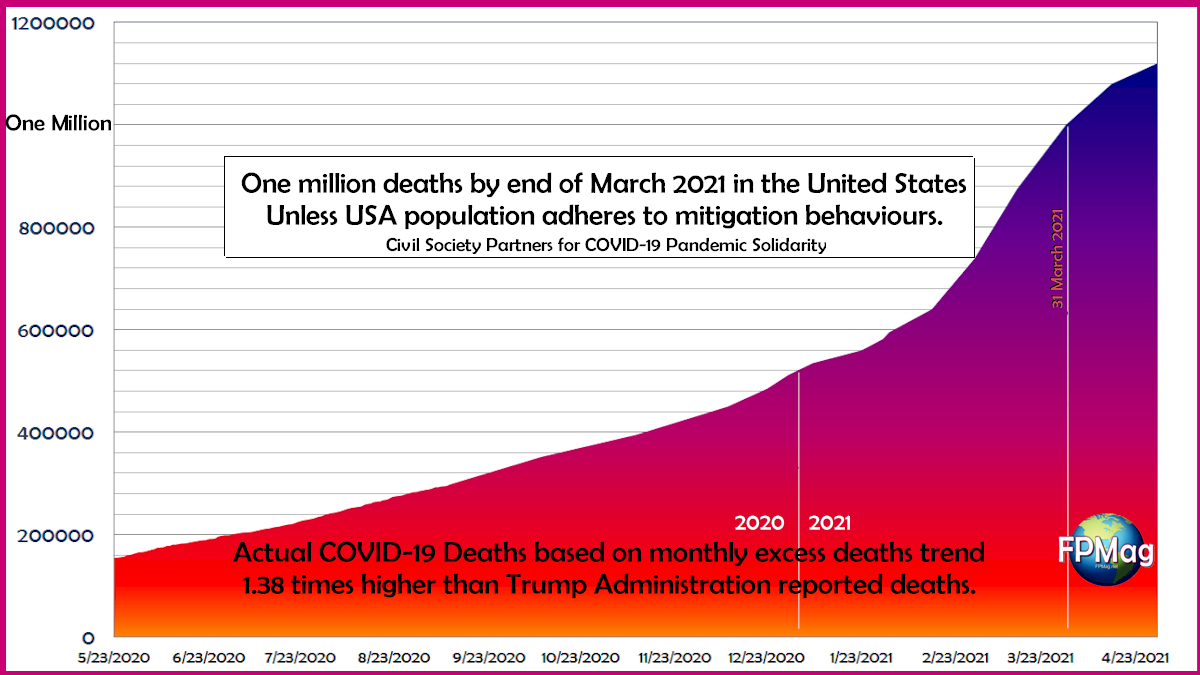 The United States is predicted to hit one million deaths on its current irrational plan aiming at “Herd Immunity” by letting the virus ron wild and infecting everyone. “This is perfect for Trump,” said Harris. “Because is is clearly defined as unethical and basically, ‘murder’. “