In order to produce the medication that maybe saved Donald Trump’s life, an unborn baby girl died in an abortion. This fetus had to be one that had kidneys.

Not much is said about Trump’s unapproved monoclonal antibody cocktail perhaps because in mid-August of this year, more than a month before Trump took sick with COVID-19, Trump kyboshed fetal tissue research.

The Trump Administration-appointed (Feb. 2020) Human Fetal Tissue Research Ethics Advisory Board of 15 persons, mostly anti-abortionists, banned just about everything that used fetal cells, in any quantum, from being used in research projects. Some fourteen proposals out of fifteen were quashed. 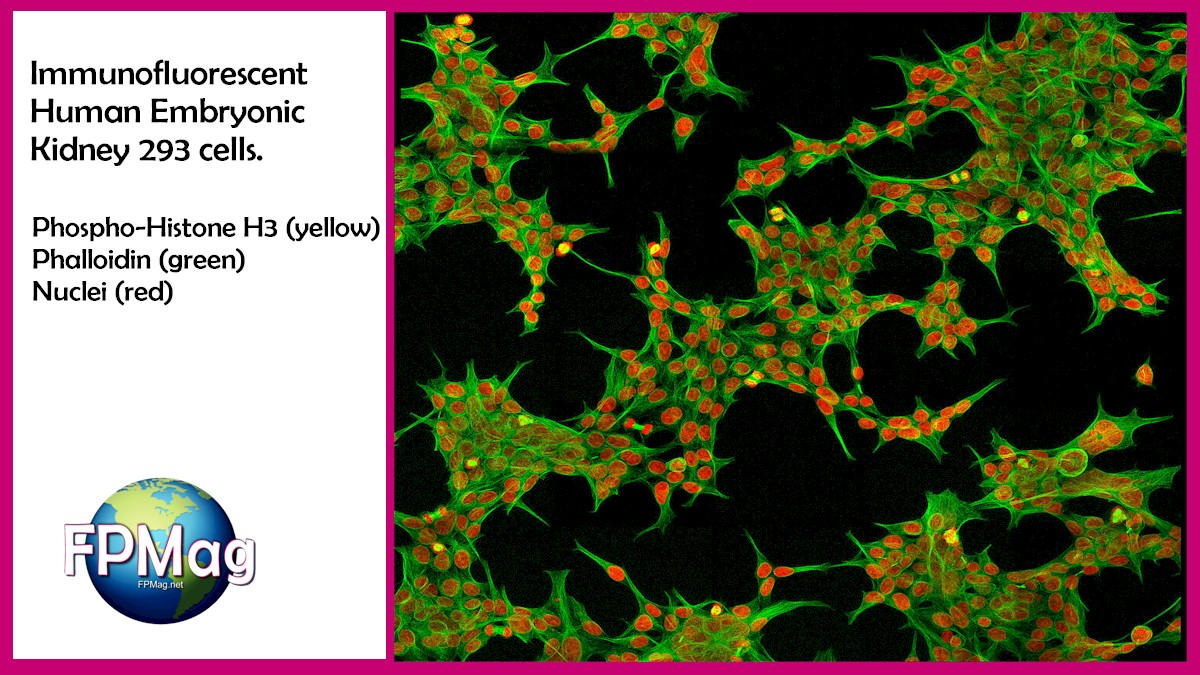 The medical research community was nearly apoplectic claiming the Human Fetal Tissue Research Ethics Advisory Board  is bogus with absolutely no proper scientific credentials to make such edicts.

US Health Secretary Alex Azar must take the final call, however none of the sources FPMag spoke with had any doubt of the Human Fetal Tissue Research Ethics Advisory Board getting its decisions approved.

Anti-abortion is a fundamental tenet of the Republican Party. But Trump is alive perhaps because of research that initially used fetal tissue.

Trump is a con artist, a grifter, a liar. People who don’t realize that are vulnerable to falling into the category of “mark”, “sucker”, or in Trump’s own words, one of the “losers” who falls for his cons. Consumer advocates call this type of person Trump calls ‘losers’  as “the credulous citizen”. They are vulnerable to things like “false advertising” and bogus products. It’s a challenge keeping the Pied Piper’s following from marching into a deadly cliff fall and today there are laws against being a Pied Piper of ill will.

Hence it doesn’t really matter about the politics or personal moraliity of Trump’s monoclonal antibody cocktail derived from fetal tissue research. It doesn’t matter to him, and whatever spin Trump puts on it is how his top will twirl. How do normal people deal with this morality issue?

“If a baby died during an abortion on demand, and the baby’s cells were used to save dozens of lives, there is still no equity in that. Thou shall not kill. But if the procedure (induced abortion) was not elective, don’t waste a single cell if the parents are willing to donate tissue for scientific research just like an organ donor would do on their drivers’ license.” That was the consensus of a half dozen doctors and nurses of The RINJ Foundation.

Read if you wish: Report of the Human Fetal Tissue Research Ethics Advisory Board FY2020.

The incipient cells in a laboratory growth Donald Trump’s COVID-19 momoclonal antibody ‘cocktail’ was derived from, were human embryonic kidney cells grown in a tissue culture from an aborted female fetus.

These cells have many names but the most precise name of the origin is HEK293.

HEK 293 come from aborted female fetus kidneys originally but can reliably reproduce and produce variations in a laboratory in a worthwhile quantity and many generations away from origin. Dozens of genetic sequences exist for research purposes.

The question of importance, is how many dead baby girl fetuses does it take to manufacture Regeneron’s REGN-COV2 monoclonal drugs, or any such drugs for COVID-19 in enough quantity to give an unknown percentage of 8 billion people the doses they would need. The answers to any of these questions are only wild guesswork until research has concluded with due approvals.

REGN-COV2 monoclonal drugs for COVID-19 are not yet proven to be a panacea but in theory, brilliant, hence refinement should take place. The potential for saving lives may be substantial as a “treatment”. It could lead to much more in other areas. HIV? HBV? Even cancer?

Remember that Remdesivir (Veklury), is an antiviral medication developed by Gilead Sciences, to be initially used as an Ebola remedy. Now Remdesivir has been cited in many good outcomes when used as a COVID-19 treatment. Anti-viral pharmacological research has a long way to go.

“Stay out of the way of progress,”  is good advice.

If induced abortion is not seen for what it is, a medical procedure; and abortion as a form of birth control is not perceived as murder; the potential of HEK293 could be lost in foolish arguments by credulous people led by charlatans.

Stem cell research and fetal tissue research need to come out of the shadows.

Human kind is beyond tissue and organ donations, we need to get past this one. Either we select and train doctors so that they are trusted, or we agree that has been achieved and trust our medical practitioners to make the right calls. Making abortion laws is a fool’s game. It is a sometimes needed medical procedure, and a doctor/patient call—sometimes only the doctor. Law or no law, it is that way. Doctors save the lives they can save.

In the meantime, Regeneron’s REGN-COV2 monoclonal drugs for COVID-19 are for the bigwigs, like Trump—very expensive too.

Treatments are needed. How long will foolish old male politicians block the work of progressive scientists because they think they are just controlling women’s bodies?

Even after a SARS2 viable vaccine is approved and vaccinations begin, millions of people will still get sick from SARS-CoV-2 infection and too many will die. Hence a reliably effective treatment is needed. Hold nothing back if it has promise. This pathogen could with a little help from its hosts, wipe out much of the human race.

I suppose a cynical future historian might look at Trump rallies and suggest that COVID-19 killed all the credulous people, the stupid ones who ignored the warnings. They were told: socially distance themselves from others, stay home, wear a mask to go shopping, and keep clean.  The evidence of quasi-suicidal behaviour at these superspreader events is in reams of video footage and still photographs. Dr. Sanjay Gupta of CNN did a study of many events and found that 82% had a surge in COVID-19 cases within a few weeks. The warnings were correct.

Treating the illness caused by SARS2

Some drugs are proving very useful from the common acetylsalicylic acid, to the also common famotidine heartburn medication. Clonidine seems to block cytokine storms in patients who already take this antihypertensive medication and some steroids have proven useful also for blocking the runaway immune systems in very sick patients. These are the direct experiences of the writer in running various medical clinics around the world. Still no one therapy is perfect for every patient. Compared to what we need to know, medical science knows relatively nothing about the SARS-CoV-2, but the learning process is ongoing and driven.

As the most vulnerable people in society are killed off by the virus, and as better treatments are derived learning from experience, SARS2 is killing a smaller percentage of the infected population. (Vulnerable persons must never be in circulation without an N95 mask. Absolutely never.)

Pie Graph: The reality of what has happened with three countries having lame-brain leadership is scary as hell.

Read back over this article. Think to yourself about the level of intelligence that it will take to solve some of these problems. Consider that COVID-19 may be a mere molecule on the tip of the spear that is coming at the human race.

The level of gray matter needed to solve these complex social, political and scientific issues is not possessed by the middle to lower echelons of the intelligence scale that men like Bolsonaro, Modi and Trump appeal to as populists. Better government is needed than these utter fools. Look for yourself. This pie chart is not just revealing, it is disgusting evidence of at least sociopathy and likely even greater ails at the top. Nearly two billion good people suffer the psychopathy of three you-know-whats. 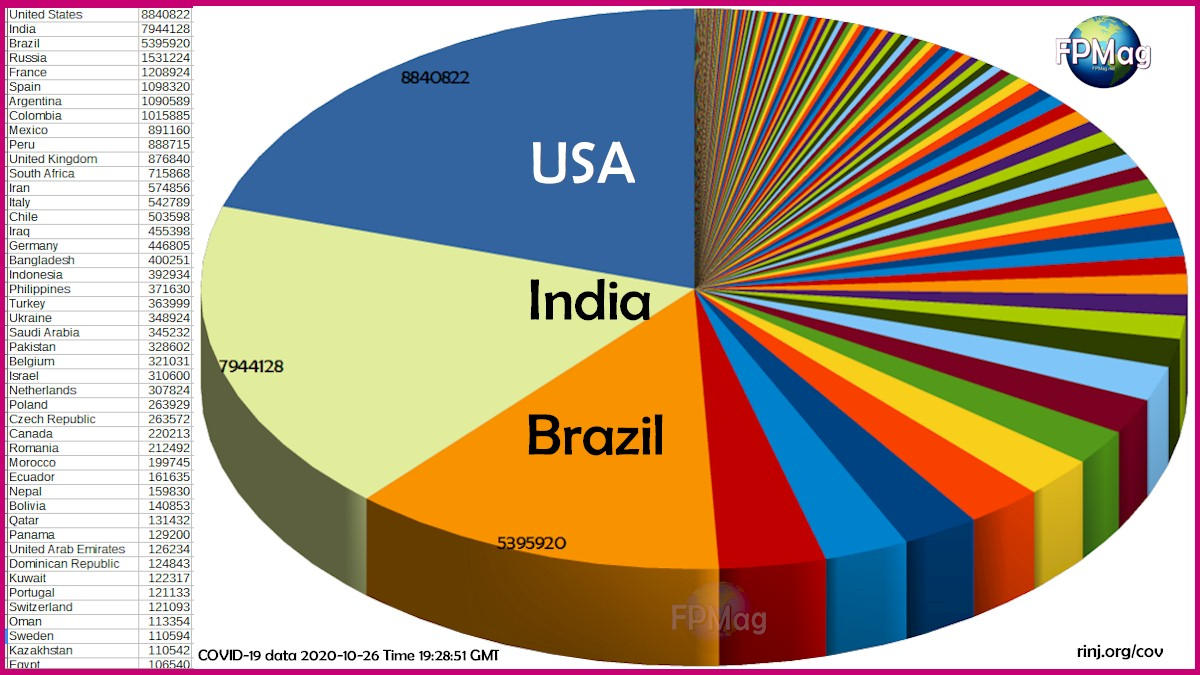 The following graph shows daily excess deaths, likely directly or indirectly caused by COIVD-19. In any case they are deaths above normal and about 1.29x (in the current period) of the reported deaths from COVID-19. These are the real numbers of Americans who died in excess of the normal number of deaths from other causes. 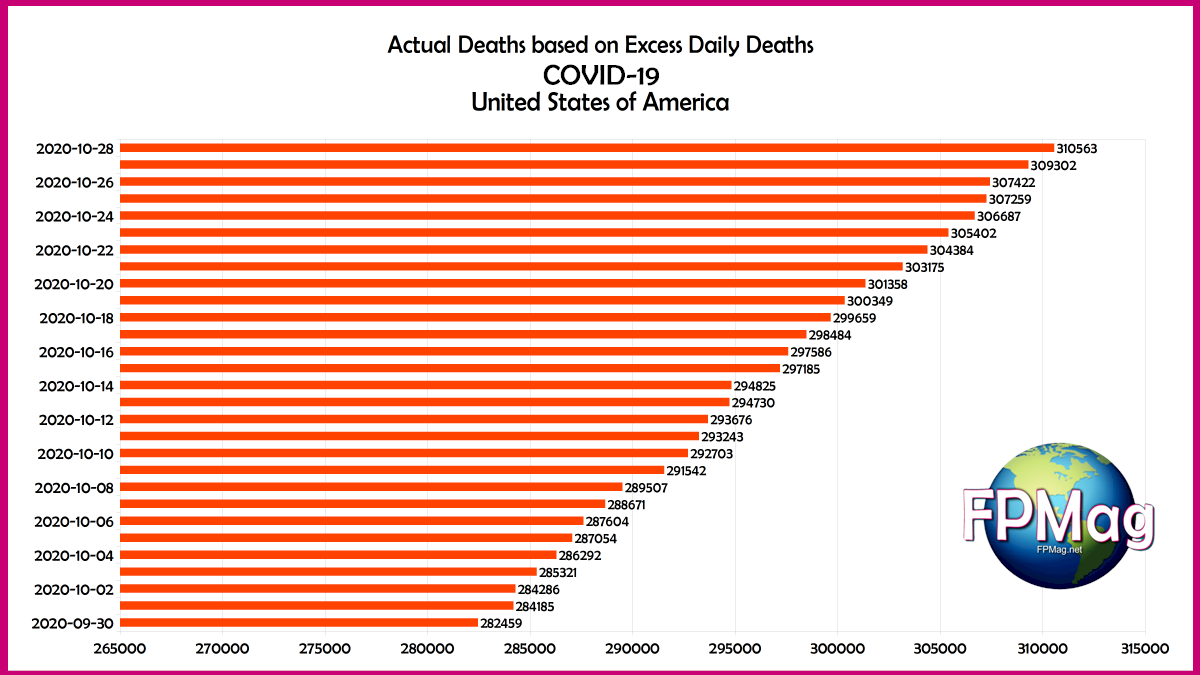 The worst fears for American’s in their next five months, as seen from today. In this forecast graph, actual excess American deaths reach a million by next April, unless radical changes take place. 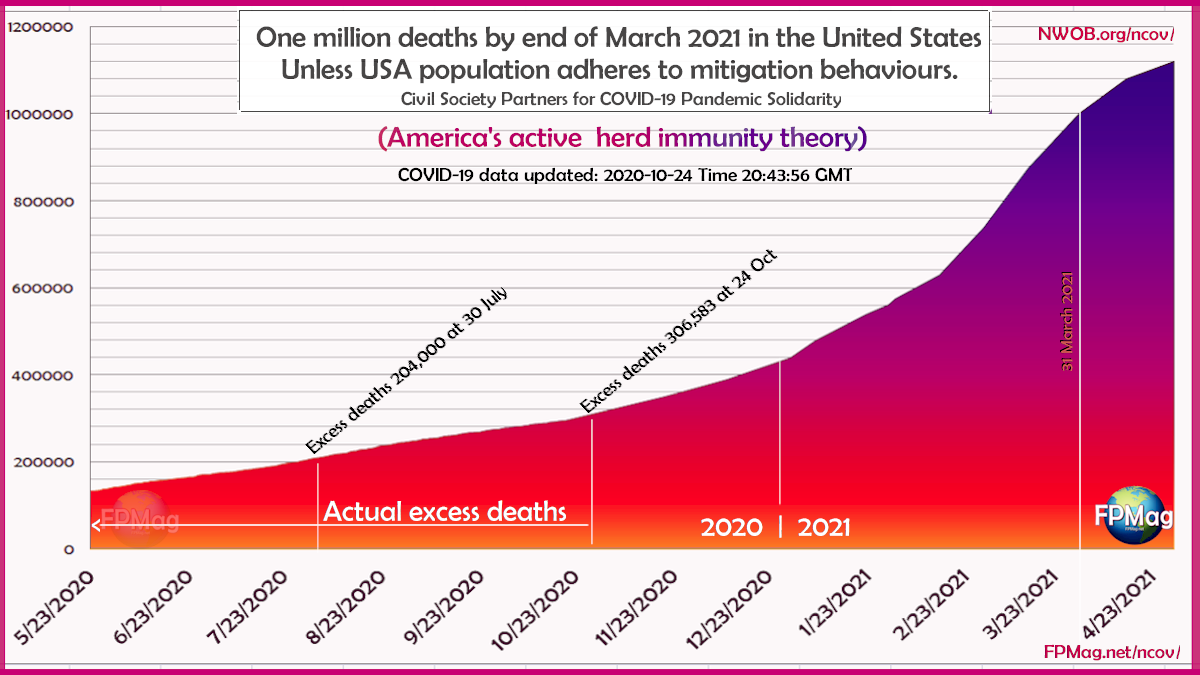