Hong Kong capable of peaceful protest in the millions. This is not Hong Kong.

What is happening in Hong Kong is no longer peaceful protest it is a surrogacy of Britain and American agitators backing armed street gangs.

Sharon Santiago rhetorically asks “What are you thinking, bringing weapons to a peaceful protest?

An 18-year-old street ganger, Tsang Chi-kin, seen in video assaulting police was shot in the chest with a live round on 1 October 2019. He was confirmed in stable condition at press time. Both  sides are to blame say some mothers.

With batons, pipes, molotov cocktails, poles and projectiles, gangs of youth have attacked Hong Kong Police in the city throughout 1 October 2019 and well into this morning, finally calming as the sun came up.

Their aim was to create an antithesis to the 1 October National Day of celebration in China of the 70th Anniversary of the Communist People’s Republic of China. Regrettably, they did this with violence against their own neighbours and look like hooligans. 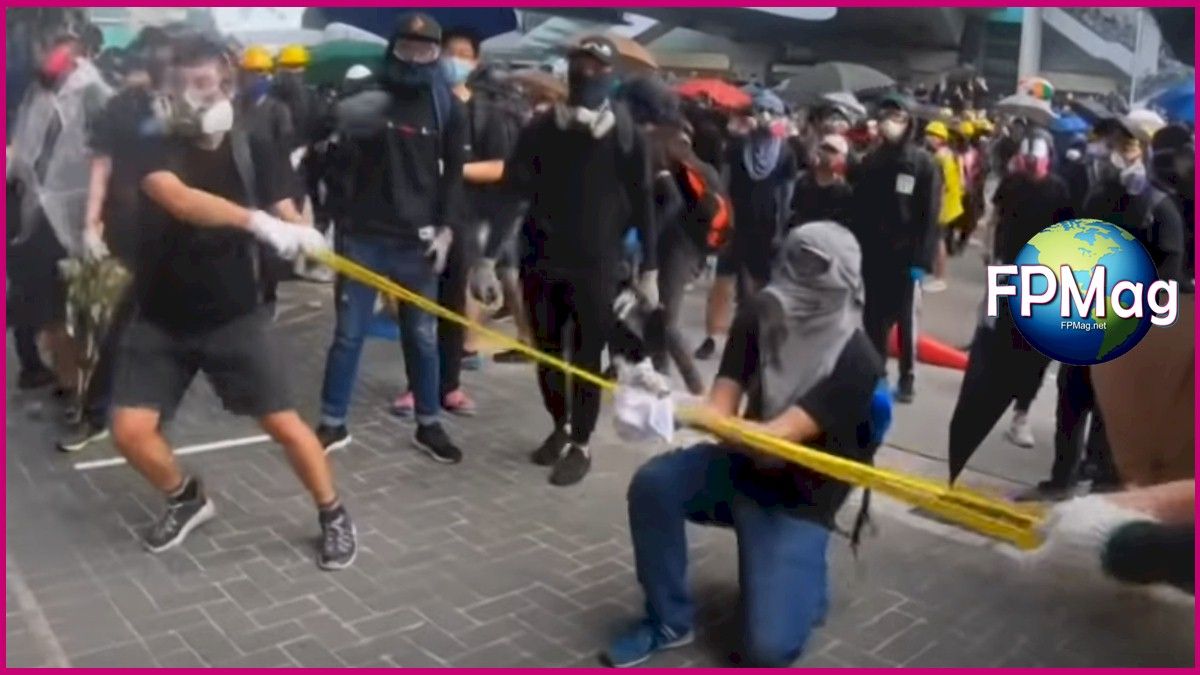 Last Sunday, persons unknown to FPMag in this picture are using a two-person slingshot to launch at local police what appears to be a pipe bomb.  Photo Credit: FPMag Video Capture.

“This type of violence is scaring many sons who are police officers who themselves have families to whom they wish to go home, whole” says a woman whose friend, also a mother, has a son in the Hong Kong police force.

Local women repeat that, “these kids are not acting alone and are being driven by foreign influences against Communist China,” said one woman who does not want her son arrested hence she does not wish to be identified. We call her, “Sue”.

Sue says she is taking her family out of the country but her son refuses to come along. She also says that this is happening to other families as well.

“The boys are being agitated to do this and because it is more exciting than their school work, they do this as an obsession instead.

“It is very sad for us. We are losing everything and yet there is nothing to win. We have it good in Hong Kong, but we will go back to Canada where we came back from ten years ago. I must say goodbye to my son because the younger children must be kept safe.” 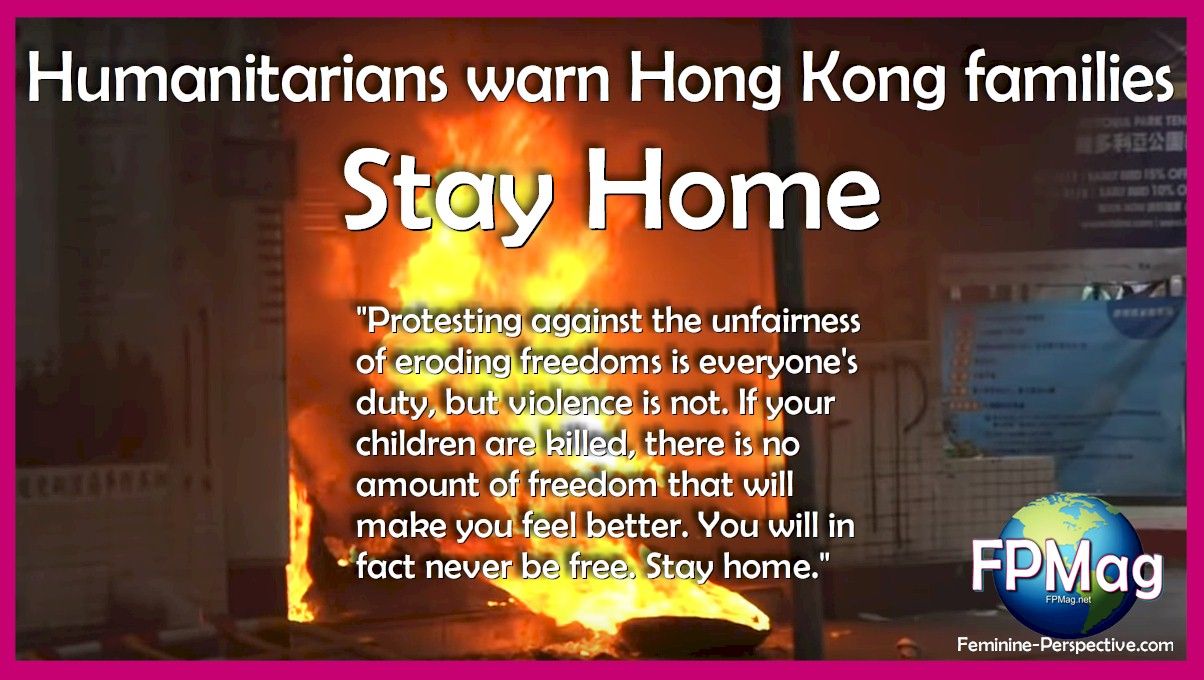 “Protesting against the unfairness of eroding freedoms is everyone’s duty, but violence is not. If your children are killed, there is no amount of freedom that will make you feel better. You will in fact never be free. Stay home, say RINJ Women in a published statement on their web site”  Photo Art/Cropping/Enhancement: Rosa Yamamoto FPMag 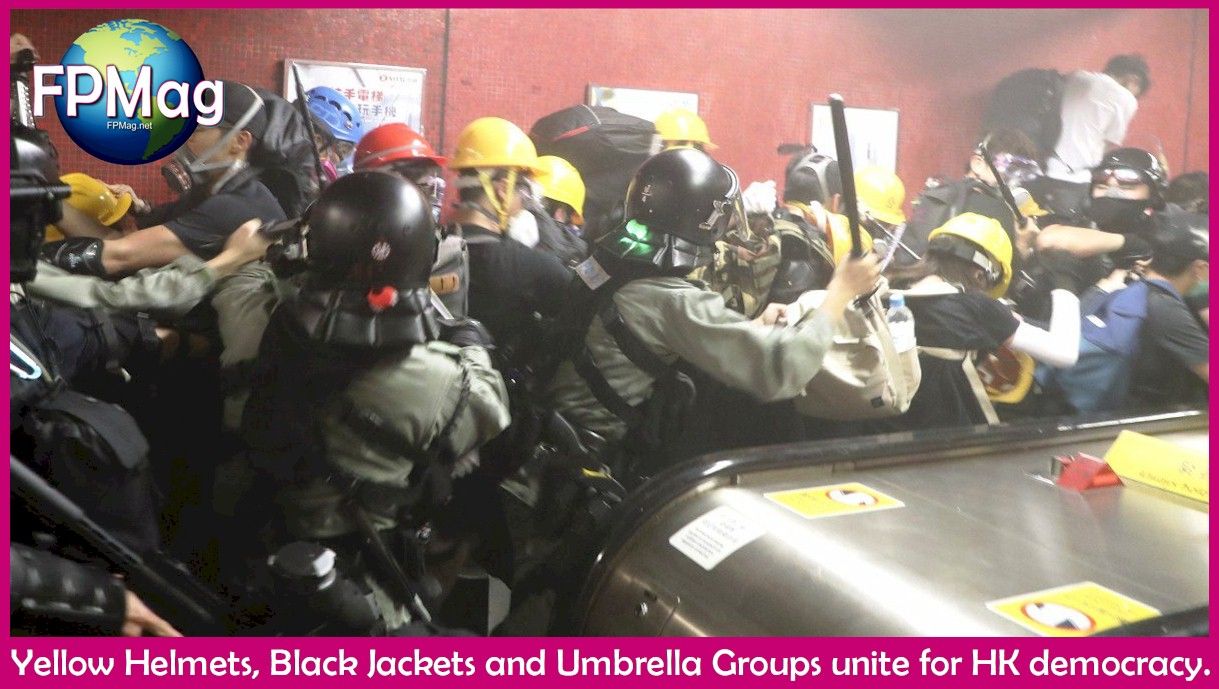 The protest phase for democracy has been overtaken by violent street gangs of anarchists who spoil life for everyone in Hong Kong. There must be a better and more peaceful way to extricate Hong Kong from the Communist Party rule say some HK moms. Many residential streets and train stations are now embroiled in the hand-to-hand combat between youth gangs and police. What was once a peaceful protest that defeated a piece of legislation to impose criminal extraditions to the mainland of China is now just riots for no particular purpose. Hong Kong has an excellent judicial system according to many observers and Beijing’s attempt to meld that into its own corrupt and brutal system was a worthwhile imposition to challenge. That being won, Hong Kong needs to move forward in safety say several families. Photo Credit: Source Submitted. Photo Art/Cropping/Enhancement: Rosa Yamamoto FPMag

The Clean Up after 1 October Insurrection

The city went to work cleaning up early today and many citizens setting up their shops and their restaurants expressed sadness that they were losing customers and having some difficulties making their payments because of lost sales.

Ranging from 12 years and up, police arrested 270 persons by morning. Hospitals report three dozen police sustained injuries and some were treated and held over while others were released. Dozens of youth gang members were also treated.

Hong Kong’s Chief Executive Carrie Lam has begun a series of public dialogue sessions, the first of which last week was an angry verbal brawl.

Beijing has shown considerable restraint thus far however it should continue to do so think some mothers of these warring youths attacking police.

“Agitators push our kids to force Beijing making a bad move,” worries Sue, ” but they don’t care if they get our kids killed.”