by Micheal John with files from Katie Alsop and Sharon Santiago. 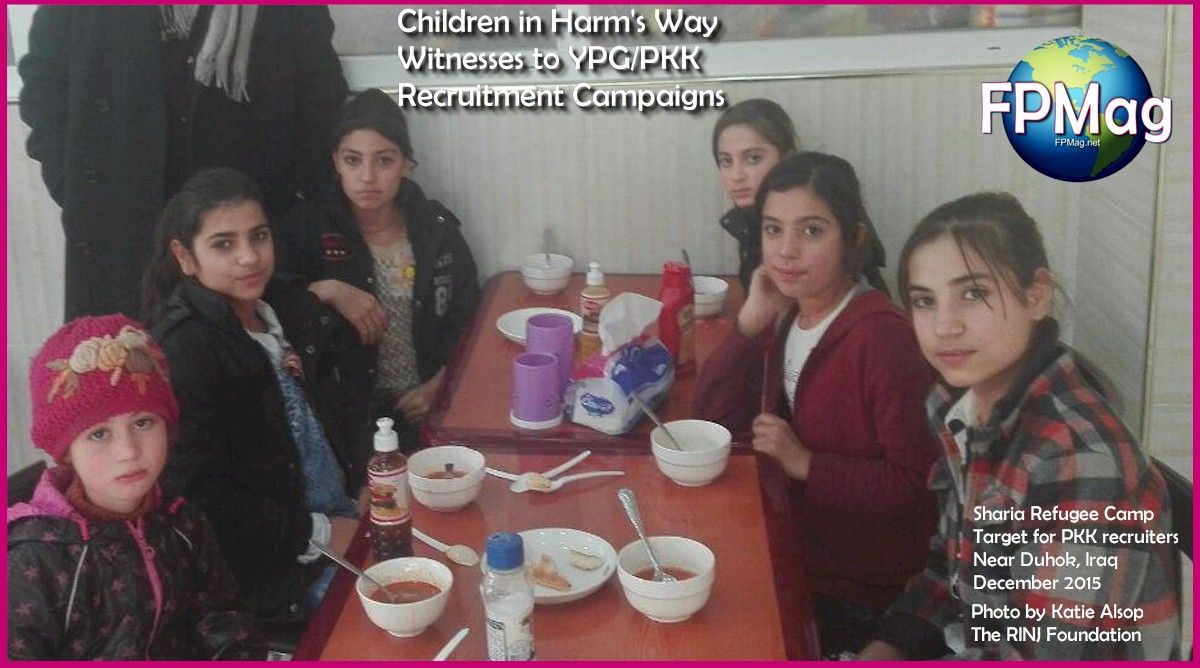 Thousands of deceased “Kurdish” allies that the USA is talking about were in fact PKK / YPG children soldiers.

“Formed in the 1970s,” says the US Central Command,  “the PKK is an armed separatist group fighting to gain Kurdish independence from Turkey. Designated by the US as an international terrorist organization, it cannot coordinate directly with the US and needed to rely on passing targets and friendly position coordinates through the Peshmerga during the Sinjar [Shingal] operations. The PKK maintained a forward base at a northern entry point to the city at the foot of Mount Sinjar.” Read US Army-Battle for Sinjar .

But in Syria, the United States worked directly with the PKK / YPG.

According to the Turkish ambassador to Canada, Selçuk Ünal, in an interview with FPMag‘s Micheal John on 5 February, 2016 at the Turkish Embassy in Ottawa, the PKK / YPG are actually one and the same organization.

This was confirmed in ar Raqqa by at least a dozen PKK/YPG/YPJ fighters.

“In Turkey I am PKK but in Syria I am YPG“, a Kurdish fighter told the civil society medical group RINJ Women who provided medical attention in the formerly ISIS-occupied Syrian city of ar Raqqa in early 2017.

Breaking a Silence on the Child Soldiers the USA Used to Fight ISIS. Thousands were killed as the UN looked the other way.

The PKK / YPG needed to control the region of Syria that borders Turkey. To do so they drove out other ethnic groups.

When the Islamic State first invaded the city of Kobane, Syria, the PKK / YPG knew its plans were being thrashed by the Salafist militants.  That was when it was a certainty US and PKK / YPG goals synchronized and the PKK  formed its strongest alliance with the USA and became a surrogate fighting force.

RINJ Women nurses who have been in Syria and Iraq providing health care to women and children since 2011,  and representatives of Human Rights Watch both claim that American-backed fighters in ar Raqqa, Syria who were used to drive out the Islamic state, were in fact children soldiers, possibly in the majority.

According to Katie Alsop of the RINJ Women, in late 2014 and early 2015 the group assisted a number of child fighters to escape their military role and leave the country. This put the civil society group at odds with the militant PKK / YPG.

The civil society RINJ Women, group filed criminal child abduction and rape complaints in August 2014 with the government of Masoud Barzani, a Kurdish politician who was President of the Kurdistan Region of Iraq from 2005 to 2017 in Erbil, Iraq.

As a result of the complaints and the subsequent strict action by President Barzani, the civil society group’s Board members came under violent attack by the PKK / YPG and a social media troll group plus a cyber attack group set out to destroy the RINJ Foundation’s reputation and physical property. Physical property in Syria including a clinic and several Land Rovers were set ablaze.

According to Katie Alsop and several others of the RINJ group, the PKK / YPG are terrorist actors whose behaviour is no different than the Hay’at Tahrir al-Sham (HTS) or the Islamic State (ISIS or Da’esh).

Months later, the PKK, says the group, were shelling a clinic they operated on one of the Sinjar mountains.

In 2017 in the city of ar Raqqa, the group took over a building near a hospital in the northwest part of city and set up a temporary clinic. Among the few remaining local civilians were many seniors and small children in hiding who needed food, clean water and medical attention for chronic and cute illness. The civil society group also attended injured SDF members including many who were children.

Of that SDF  group, some were YPJ/PKK/YPG who expressed a desire to get out of their current militia situation. They were very young kids trained as soldiers and somewhat brainwashed.

The civil society group set up a liaison and two such children near ar Raqqa would be met and extracted to safety.

Not just two but eight young girls showed up at the rendezvous. The escorted removal had to be delayed while the kids were hidden for a couple days and fitted with civilian clothes while tattoos were removed. Eventually, after a tough journey, with the help of some unnamed Jordanian officials, the children were moved to safety past Syrian, American and PKK/YPG combatants.

After the Children’s Escape the PKK Went Ballistic

The private security team for the women’s civil society medical group sent reinforcements but not before fighters from the PKK / YPG attacked the women’s building. The attackers were neutralized by the defending security guards from broken rooftops, and when the reinforcements arrived the order was given to evacuate.

The RINJ civil society group then went to al Mayadin in Deir Ezzor along the Euphrates River and bolstered a birthing clinic already located there.

“Unfortunately, said Alsop, “this left the small few people in ar Raqqa without the care they desperately needed. However, there are only so many aid workers and we kept our group alive by evacuating from PKK / YPG in Raqqa.”

“We try to have a good rapport with the Americans and their occasional friends among the Da’esh but we keep our distance from then forward from the PKK / YPG.”

“Since 2014, by word of mouth we have helped other children flee from their captors who exploit them as soldiers,” she added.

“We have needed to be very careful with the Americans,” says Katie.  “We know we can’t let them learn our exact whereabouts or they give that information to the PKK / YPG. We are certain that happened in the case of the arRaqqa YPJ/PKK escapees. But the Americans only found out after the kids had passed through Jordan. Nobody in the Middle East can be trusted,” said Katie, a veteran of many years of service.

“We don’t know for sure how the Americans will react in every case, but we know they have betrayed us to their so-called Kurdish allies (PKK / YPG) and  that in the case of  some female victims of the Kurdish militants who have fallen into American hands, the Americans also abused the girls. We are sure they don’t want to talk about that.”

“It has been a strained relationship with the Americans since we helped the many children soldiers escape from PKK / YPG,” she added.

“The only people we have come to trust in Syria,” says Katie, “are the Russian soldiers, and in Iraq we trust the Turks.”

“In both countries, Syria and Iraq,” she adds, “any Turkish soldier is a civilian’s friend. They get angry when we ask for a shield for some kids we try to extract. But they are angry that its a kid we demilitarized (including slave tattoo removal), not at us. They are like the Russians in Syria and take painstaking efforts to help protect civilians and to learn about and protect the civilian humanitarian aid workers in the communities they police and learn where they can send civilians who also need help. They are also suffering like us the bad aims of some airplane drivers who can’t aim their bombs correctly,” she added with a smirk.

Medical records shown to FPMag for some of the PKK / YPG patients treated in ar Raqqa in 2017 were born after 2003, others were born in 2002. 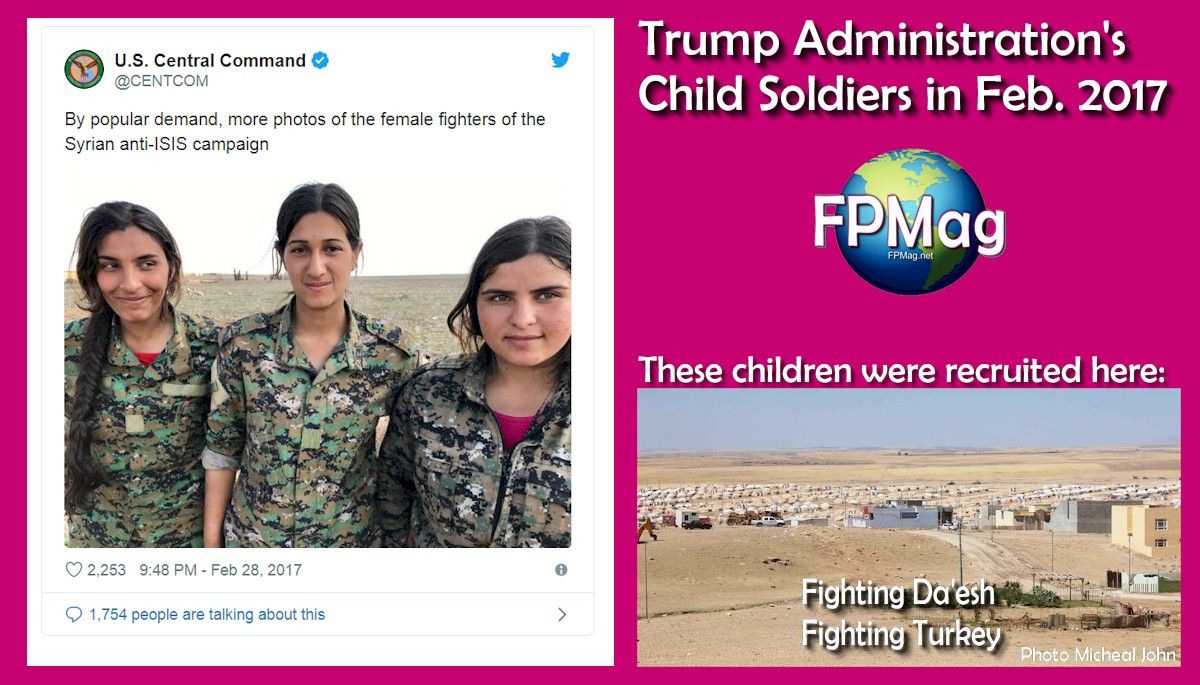 These Are Child Soldiers CENTCOM posts as “girlie pics” and says it is using to fight Da’esh. In Feb. 2017 they were not 15.

By popular demand, more photos of the female fighters of the Syrian anti-ISIS campaign pic.twitter.com/5YaDkKpSHA 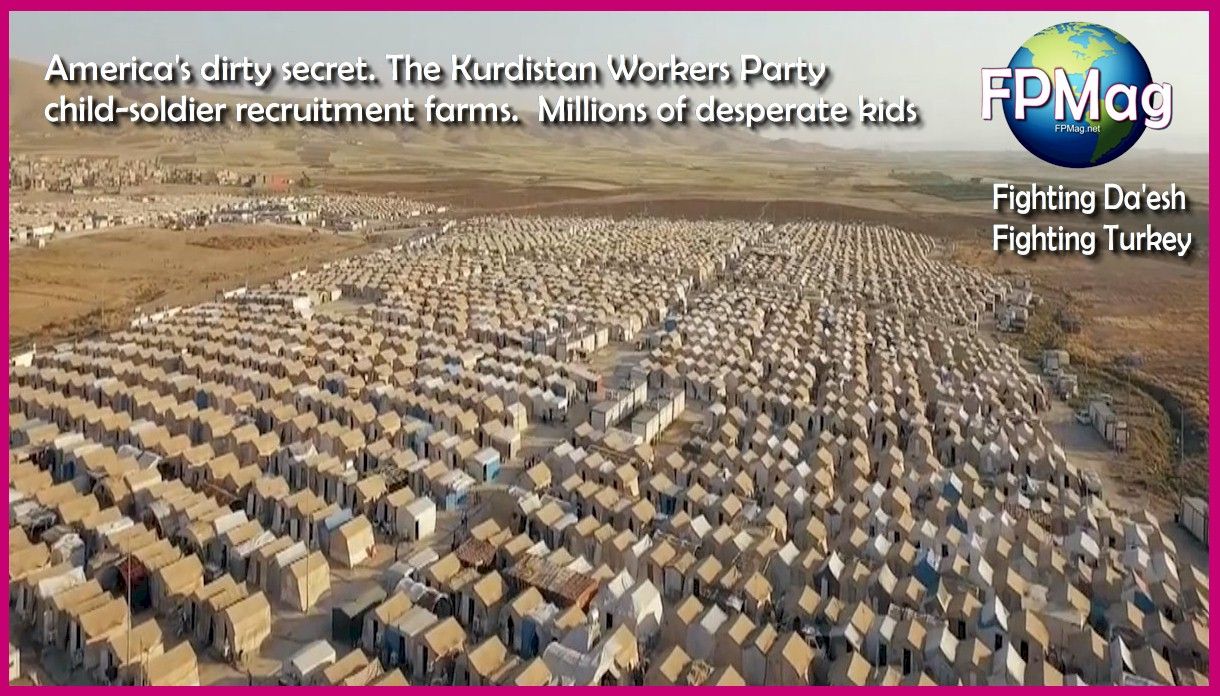 Out of 4 million Syrian refugees in Turkey 460,000 of them are Syrian and Iraqi Kurds living in tents.

The PKK / YPG have been for years ethnically cleansing the northern part of Syria for the past five years with American military assistance in order to create a region that is self-governed by terrorists from which attacks can be launched against Turkey and Iraq. In Iraq are Kurdish groups that have splintered away from the PKK / YPG.

America has a long history of creating militia groups to perform as deniable surrogates in military actions around the world, just as Iran has done.

Iran has 100,000 regulars and surrogates in Syria and will stay in Syria indefinitely, creating a quasi-self-governed region in the south from which it launches attacks against Israel while preparing to mount an all-out war to destroy Israel.

In the North of Syria the American-backed PKK / YPG  intend to do the same thing against Turkey.

For some reason, Europe has looked the other way and has joined America and is also fighting “shoulder-to-shoulder” with child soldiers of the PKK / YPG. Read: France-has-been-looking-at-Turkey-as-an-autocracy

The PKK / YPG have at best guess some 80,000 fighters (terrorists) distributed all over the Middle East and in European child-soldier training camps.

America’s Dirty Secret that Everyone but American people know. 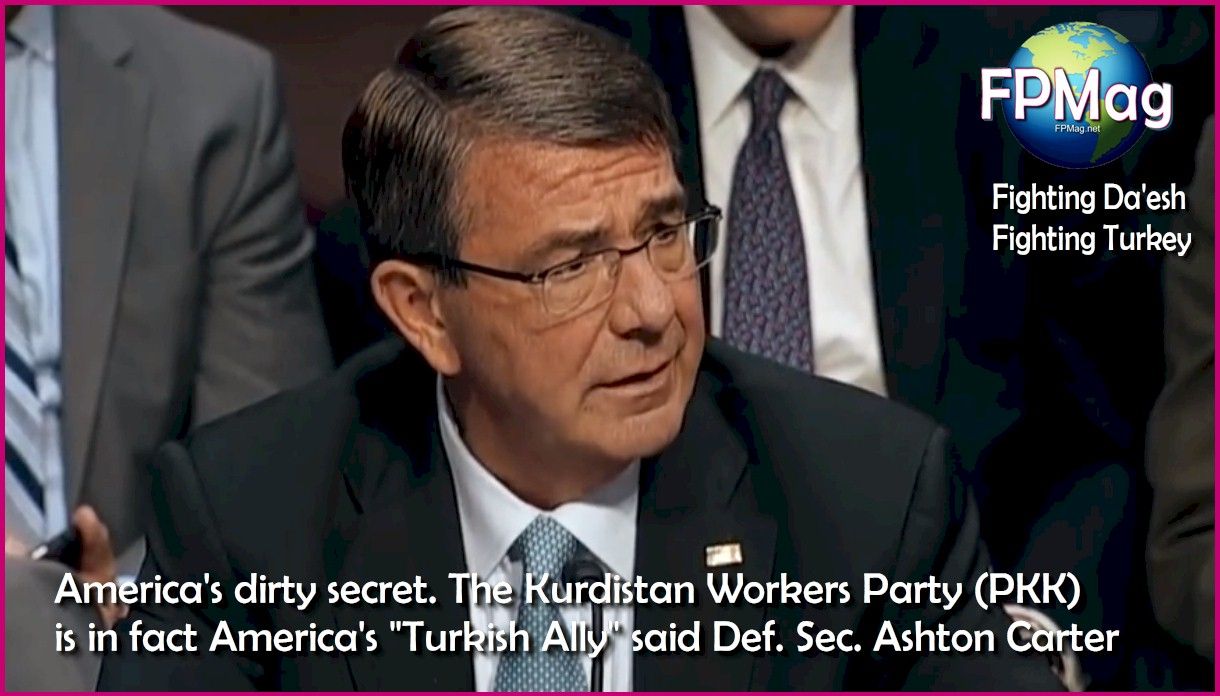 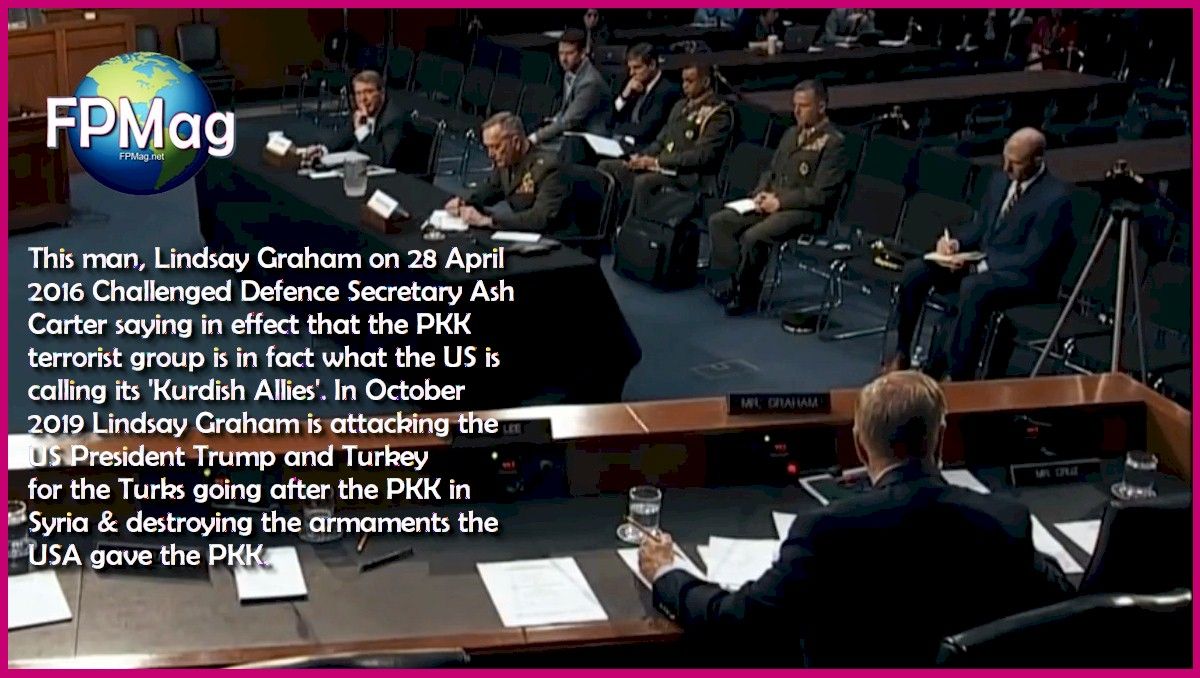 Sen. (R) Lindsay Graham also knows that the US is using Child Soldiers against ISIS because civil society aid workers wrote to him and told him in 2016. 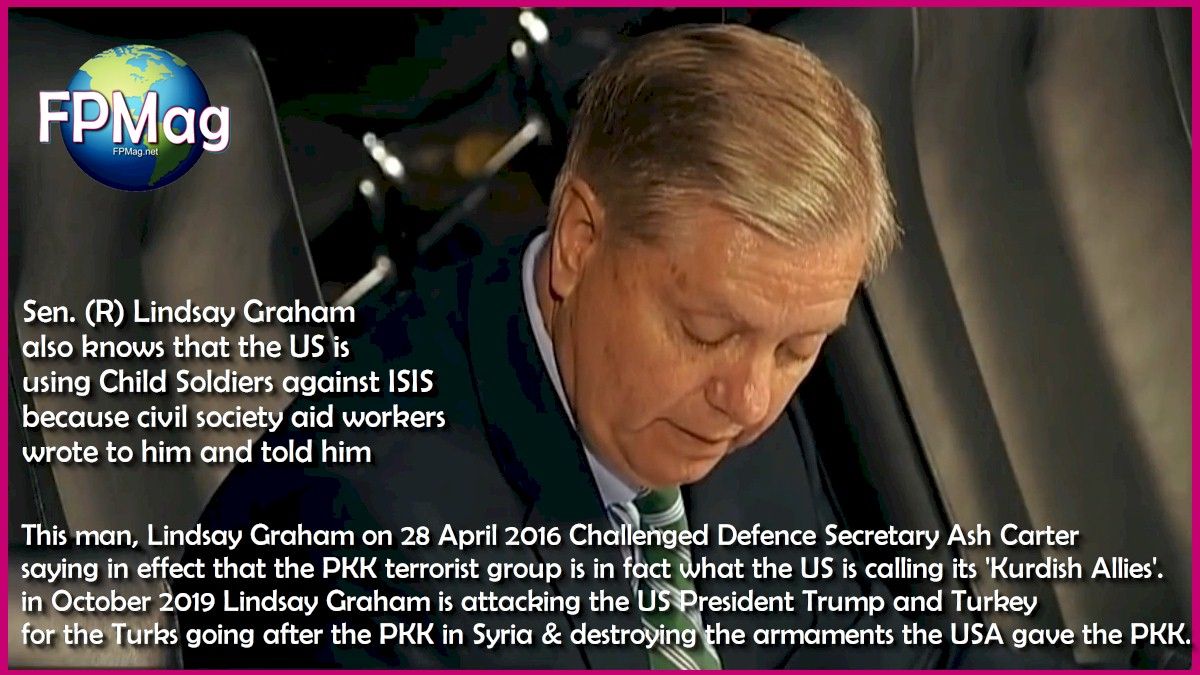 The photo and its story: This man, Lindsay Graham (US Senator – R) on 28 April 2016 Challenged Defence Secretary Ash Carter saying in effect that the PKK terrorist group is in fact what the US is calling its ‘Kurdish Allies’.

Sen. (R) Lindsay Graham also knows that the US is using Child Soldiers against ISIS because civil society aid workers wrote to him and told him in 2016.