No Million MAGA for Trump but Super Spreader for SARS2 says RINJ rep. in DC seeking answers from GSA

From Washington DC, Monique Deslauriers reports that “the noisy mob brawls and general disturbances on the streets of Washington DC are not a ‘MAGA Million March for Donald Trump’ as claimed, but a zero-gain guaranteed super spreader for SARS2.” Monique is an executive director for The RINJ Foundation women’s rights group (USA) as well as being a regular contributor and consultant to FPMag.

Deslaurier is in Washington seeking an interview with Trump-appointee Emily Murphy (@GSAEmily) of the General Services Administration (@GSA) tomorrow.

Or in the alternative, the FPMag contributor seeks to meet with anyone who can talk about why the transfer of government is halted from the President elect to the failed candidate now living in the White House. This matter, say a number of sources close to the US President—people familiar with the matter who were not authorized to comment and requested anonymity for now—is a “threat to the security of American families and a potential disaster in the making“.

Donald Trump’s candidacy was a boisterous effort and a good campaign, albeit a series of super spreading rallies that caused “30,000 infections and 700 deaths” according to a Stanford report.

Trump ‘s electoral hopes were trounced by the stronger team of former Vice-President Joseph Biden and Senator Kamala Harris, an astonishing first for America as well as the enormous and totally secure election processing since 3 November that some people are claiming is a beacon of democracy to the world.

Donald Trump drove through the crowds in Washington DC yesterday on his way to a golf game but otherwise he is seldom seen and is ignoring the 11 million Americans who have been infected with SARS-CoV-2 of which cases, 3,995,625  were active at the time of publication and some 256k had reportedly died while excess deaths at the same time exceeded 330k.

Meanwhile the obscure GSA claims that it is all about delivering “the best value in real estate, acquisition, and technology services to government and the American people”, but the critical role right now is providing housing, budget and logistics support for the transition of government for the United States executive branch.

“The General Services Administration is an independent agency of the United States government established in 1949 to help manage and support the basic functioning of federal agencies.” Wikipedia

“No Million MAGA March for Trump but a Super Spreader for SARS2,” says RINJ rep. 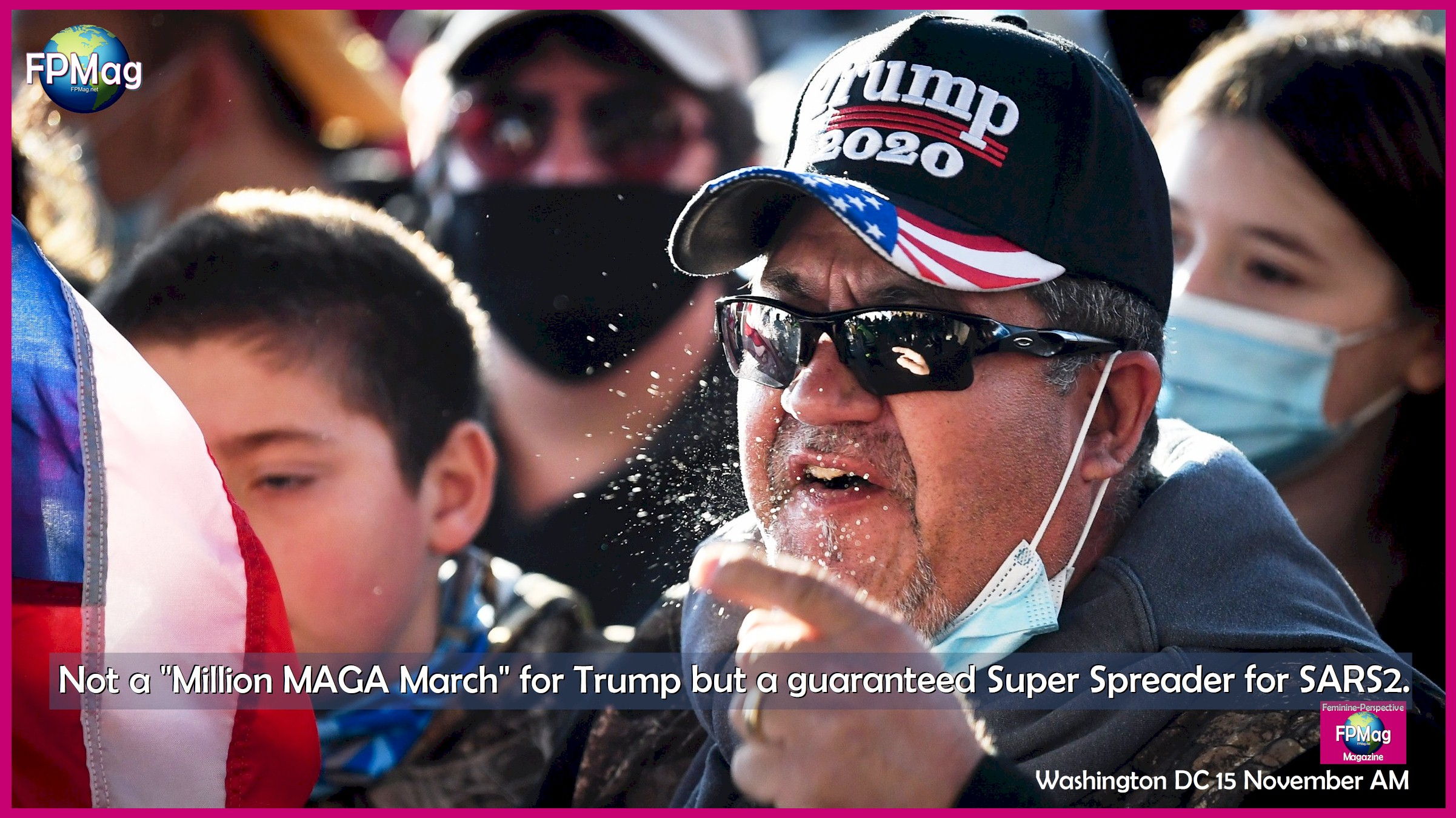 “While in Washington I have observed that the Mayor of DC is awesome,  just like other women leaders, our sisters in America like Michigan’s Gretchen Whitmer;  Janet Mills, the first woman governor of Maine, my state governor;  Governor Laura Kelly of Kansas; Kate Brown of Oregan—as just a few examples.”

“DC Mayor Muriel Bowser has done an amazing job of fighting COVID-19 in the District of Columbia although some things like Trump’s MAGA March nobody can do much about,” Deslaurier noted. 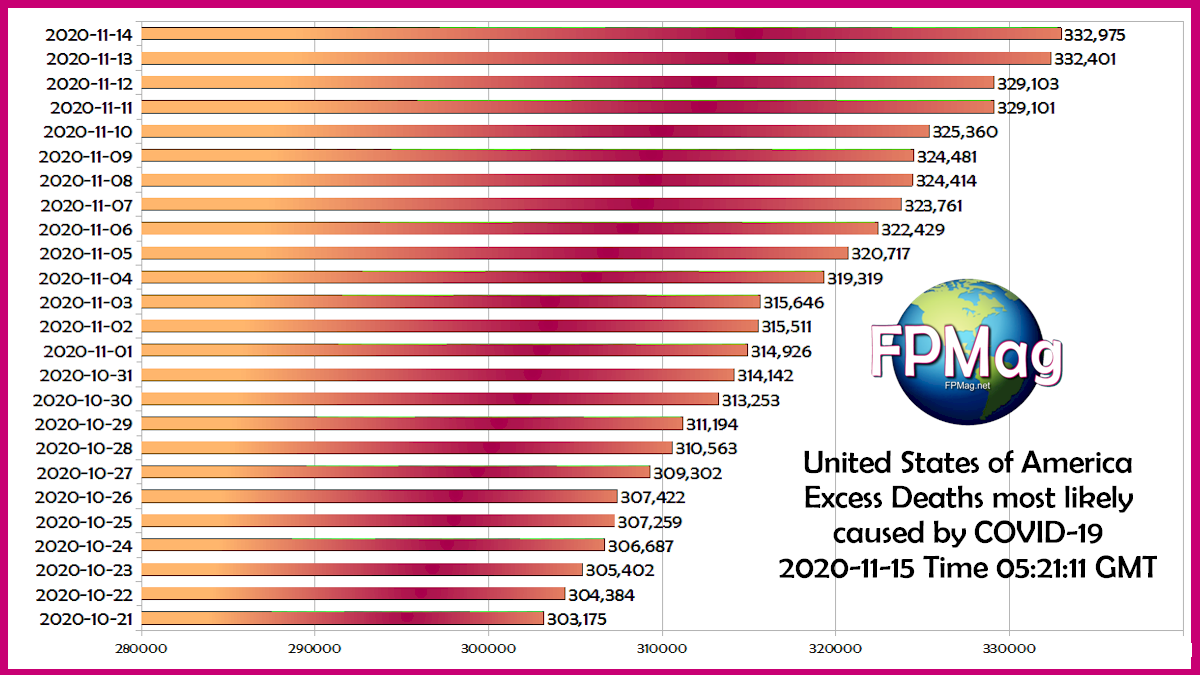 Actual USA COVID-19 Deaths based on Daily Excess Deaths. Source: CDC and Civil Society Partners for Human Solidarity against COVID-19
Note: Daily increases in excess deaths will differ from Reported Case Fatality numbers because the reporting times are different, especially during weekends when most medical examiners’ full staffs are not working. Reports can accumulate for a few days, even, then submitted. Right now it is a difficult task. Many deceased are placed in refrigerated trailers outside  hospitals, waiting to be processed. Many people die at home, never having been tested and never seeing the inside of a hospital. Art/Cropping/Enhancement: Rosa Yamamoto FPMag

“While these of Trump’s illegal militia maniacs are making trouble on the street the Washington DC Police services under Mayor Muriel Bowser have done a magnificent job of keeping the peace.

There have been some skirmishes thus far, but generally things are calm, helped largely by the fact the DC Mayor’s region is a “no carry region” and people with guns are being arrested,” Deslaurier added.

“The refusals to the Joe Biden President-elect transition team for General Services Administration services, as an independent agency of the United States government to help government function, means, if the GSA’s claims are true, that the USA federal government will not function, at least in part, without its esteemed services,” quips Deslaurier. 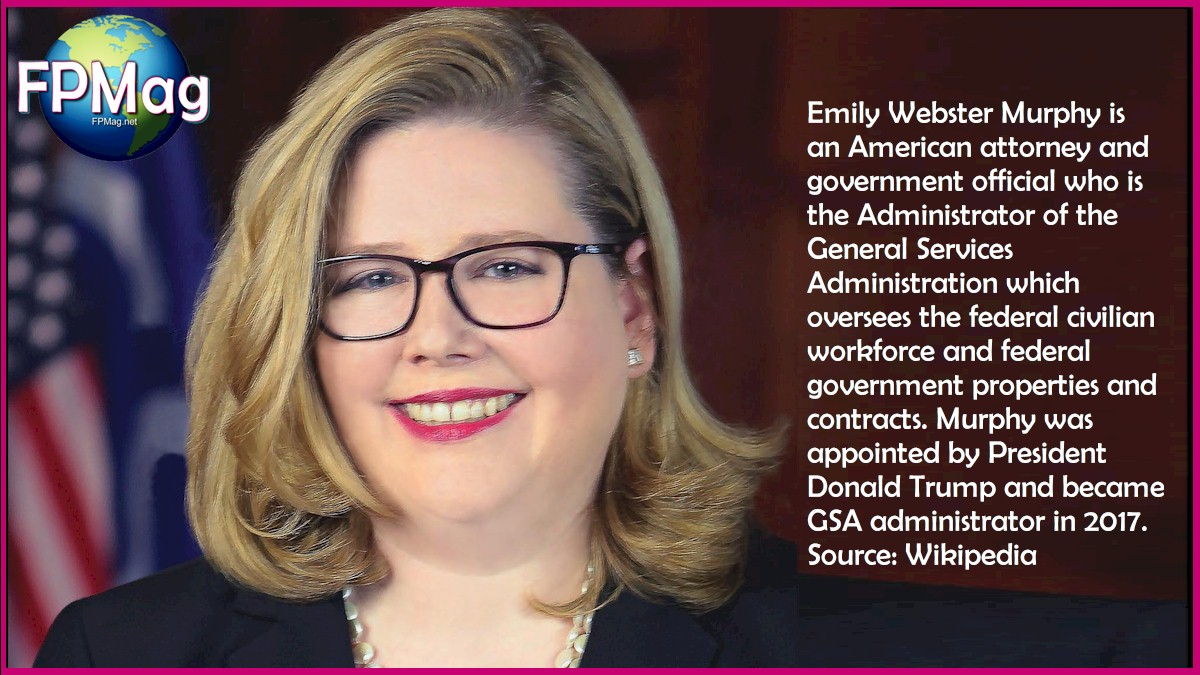 The shenanigans of the now apparently very political “General Services Administration” have drawn the ire of Senators and Congressional Representatives as well as the Public Service’s Center for Presidential Transition which issued a strongly worded statement, dated 8 November 2020, readers can obtain in pdf form here:  Center-Advisory-Board-Statement.

“We urge the Trump administration to immediately begin the postelection transition process and the Biden team to take full advantage of the resources available under the Presidential Transition Act. This was a hard-fought campaign, but history is replete with examples of presidents who emerged from such campaigns to graciously assist their successors.” (Citing Public Service’s Center for Presidential Transition)

“It is contrary to the peaceful transition of power, and it will ultimately have an impact, not on just the Biden administration, but it really is problematic from a national security and homeland security perspective,” Chris Lu, who served as deputy secretary of labor during the Obama administration and as the executive director of the Obama-Biden transition in 2008, told Vox’s  Jen Kirby.

Deslaurier says that “my roles as the USA head of a global women’s rights group is to demand better leadership for women and their families in the fight against the tsunami of SARS 2 infections that is overwhelming families at every level across the United States.”

“The safety of women and their families is imperiled by COVID-19,” she added.

“Daily increases in excess deaths will differ from Reported Case Fatality numbers because the reporting times are different, especially during weekends when most medical examiners’ full staffs are not working. Reports can accumulate for a few days, even, then submitted. Right now it is a difficult task. Many deceased are placed in refrigerated trailers outside  hospitals, waiting to be processed. Many people die at home, never having been tested and never seeing the inside of a hospital.” (Citing Civil Society Partners for Human Solidarity against COVID-19)

“I have been asked by at least two Board members to find out what on Earth is going on to delay the functioning of government from a public health and national security perspective, and this cannot wait,” she emphasized.

“Here I am in Washington DC  finding out that the national government at the level of the Executive Branch is dead in the water and all around are people yelling and screaming while ignoring mask wearing; ignoring social distancing; and probably ignoring all other public health guidelines,” she exclaimed.

“Kamala Harris and Joe Biden say they understand the problem. I already talked to their people who are amazing, but they say they can only encourage  people to do the right things now, but after 20 January when they have the reins of power, there will be a sea of change for the better. Well, that’s what we patriotic Americans need. Change. Because this failed election candidate Trump was a disaster and he still is a disaster for the American people.”

“Women in America need to have their messages heard. Our families are suffering,” she said on Zoom.

“And we need a national plan to fight COVID-19 for the safety of women, children and their families all across the United States of America,” says Monique Deslauriers representing nearly a million RINJ USA members who plan to deliver their message to the White House and to the General Services Administration (@GSA) tomorrow.