Kudos to President (elect) Joseph Biden for a well-deserved victory, from Feminists. ‘Bless you, America.’

The US General Services Administration  sent a letter dated Monday to President (elect) Joe Biden, commencing the official transition from the previous administration to the new Biden administration.

FPMag decided to ask many feminists for their view of events which essentially led to this new era of news coverage.

Here is the summary of what women told FPMag:

“Wow. “President Joe Biden,” has a very good ring to it. It is fun to say that a few times, like deep-breathing yoga.”

“Wow. This beloved American has served the public for nearly half a century as a solid, amicably conciliatory, dedicated public servant. He is driven by universally-accepted core ideals. Calming, eh?”

“Wow. The calm feeling is wonderful compared to the psycho-drama of the past four years.” 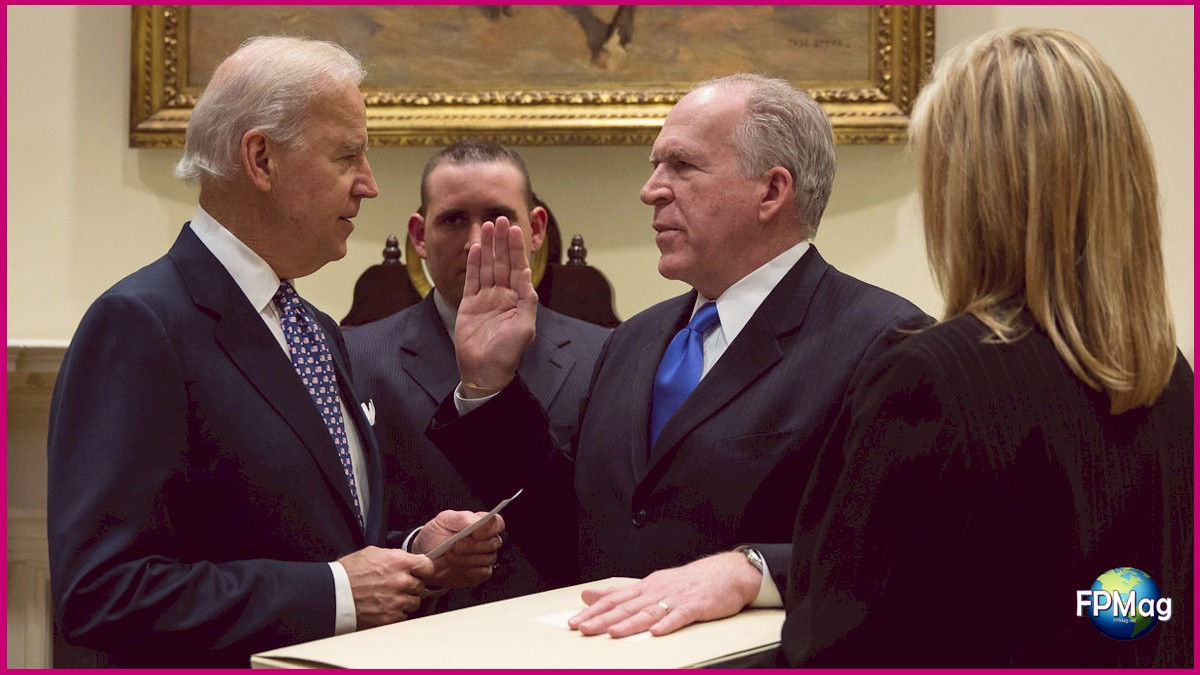 A man with considerable experience in getting things done has been elected President of the United States. In this file photo, then-Vice President Joe Biden swears in former CIA Director John Brennan in the Roosevelt Room of the White House, 8 March 2013. Members of Brennan’s family stand with him. Brennan was sworn in with his hand on an original draft of the Constitution, dating from 1787, which has George Washington’s personal handwriting and annotations on it. (Official White House Photo by David Lienemann)
Note: This official White House photograph is being made available only for publication by news organizations. Photo Credit: Official Government Photo

“Dr. Buni in Syria who has worked closely with US Servicemen in the Middle East, says her information is that “probably 100 million Americans or more are at or near the poverty level because of unemployment and lack of a stimulus plan.”

“Over 4.8 million people in the USA are confirmed infected with COVID-19,” notes the doctor, “and if current Case Fatality Rates are maintained, 2% (Over 96,000) will die over the next 30 days or a little longer. As COVID-19 infections continue to climb at around 150,000 per day, tens of thousands more will die in the coming weeks.”

She paused and then said, “When young Joe Biden dreamed of being President of his beloved country, that is not what he dreamed about. This is going to be a tough four years for the most likeable US President since Barack Obama.”

A Great American Presidency can fix the Chaos is the consensus based on a traditional faith and belief in American resilience.

“Welcome back, America,” seems to be a fair way of assessing the current feelings around the world heard from people commenting in the course of discussing many various other news events.

FPMag asked a feminist group leader what she thought of the last 24-hour developments wherein the Trump administration finally agreed to allow a transition to take place from the Trump Executive Branch to the Biden Executive Branch.

Katie Alsop of the RINJ Foundation said,“OK. Let’s wait and see. It is however very nice to learn that the United States will have a president who doesn’t believe he controls the bodies of all women around he world.” Her words cracked like a whip in a WhatsApp call.

She refers to Trump’s ban on the funding of women’s humanitarian organizations.

I dared ask what she thought the difference would be. She said, “Somebody just closed the door on hell. The Trump Presidency has been a hellish nightmare for women and women’s rights.” 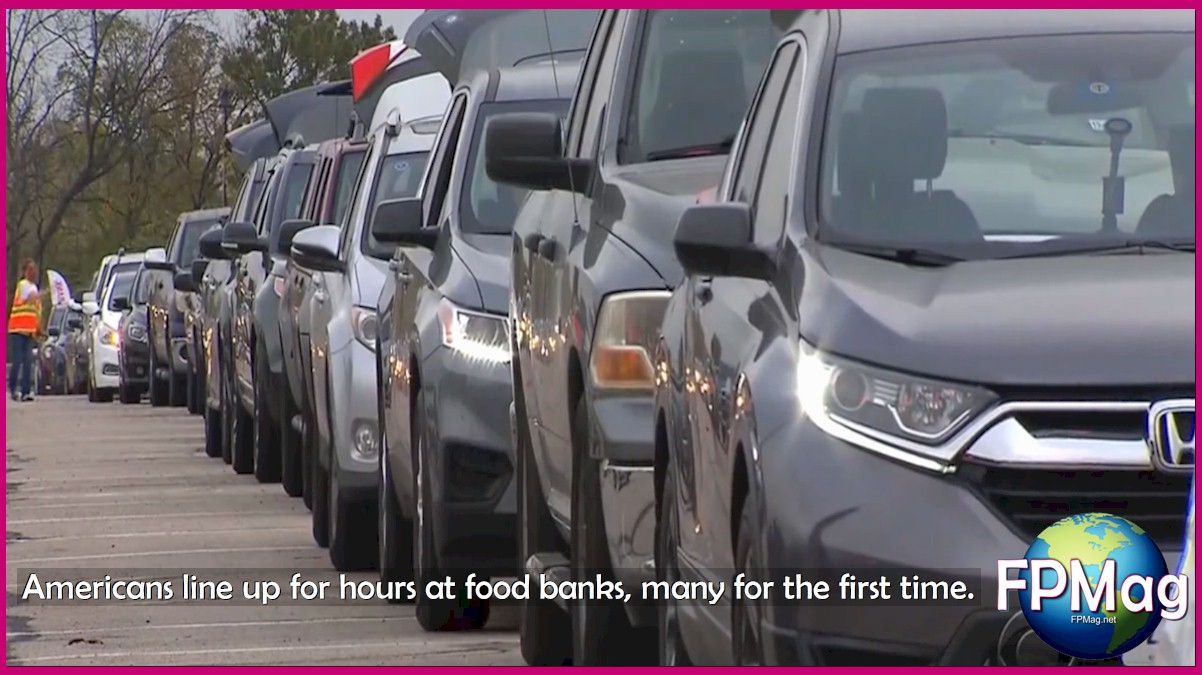 This will be the legacy of Donald Trump: Women struggling to feed their beautiful families.

The silver lining of this cloud seems Gold-Plated

At press time, the Biden transition team had already summoned some of the best and the brightest scientific minds in America to tackle this COVID-19 problem head on. One of the key developments is the plan to immediately, “Fix personal protective equipment (PPE) problems for good,” according to a statement delivered by the Biden-Harris team.

Monique Deslaurier of Calais, Maine, a nurse practitioner, and USA Executive Director of The RINJ Foundation, said her bid for the most important item on the Biden transition agenda was the plan to “Establish a U.S. Public Health Jobs Corps to mobilize at least 100,000 Americans across the country with support from trusted local organizations in communities most at risk to perform culturally competent approaches to contact tracing and protecting at-risk populations.”

“It may be light compared to the best CTTIO in the world but it’s a good start” she added.

An Incipient Optimism is growing and may soon be glowing. But there are hard battles to fight: disease and hunger.

Many around the world are praying for America to have a good outcome and that, we believe include President (elect) Joe Biden, every single day.

“Congratulations, good luck, and thank you for your patience and perseverance, Sir Joseph Biden and your amazing vice president and the Biden team,” says nurse Karina Angeles of the Philippines, who may be the smallest nurse in the world, sending out kudos to the most important man in the world, this week. 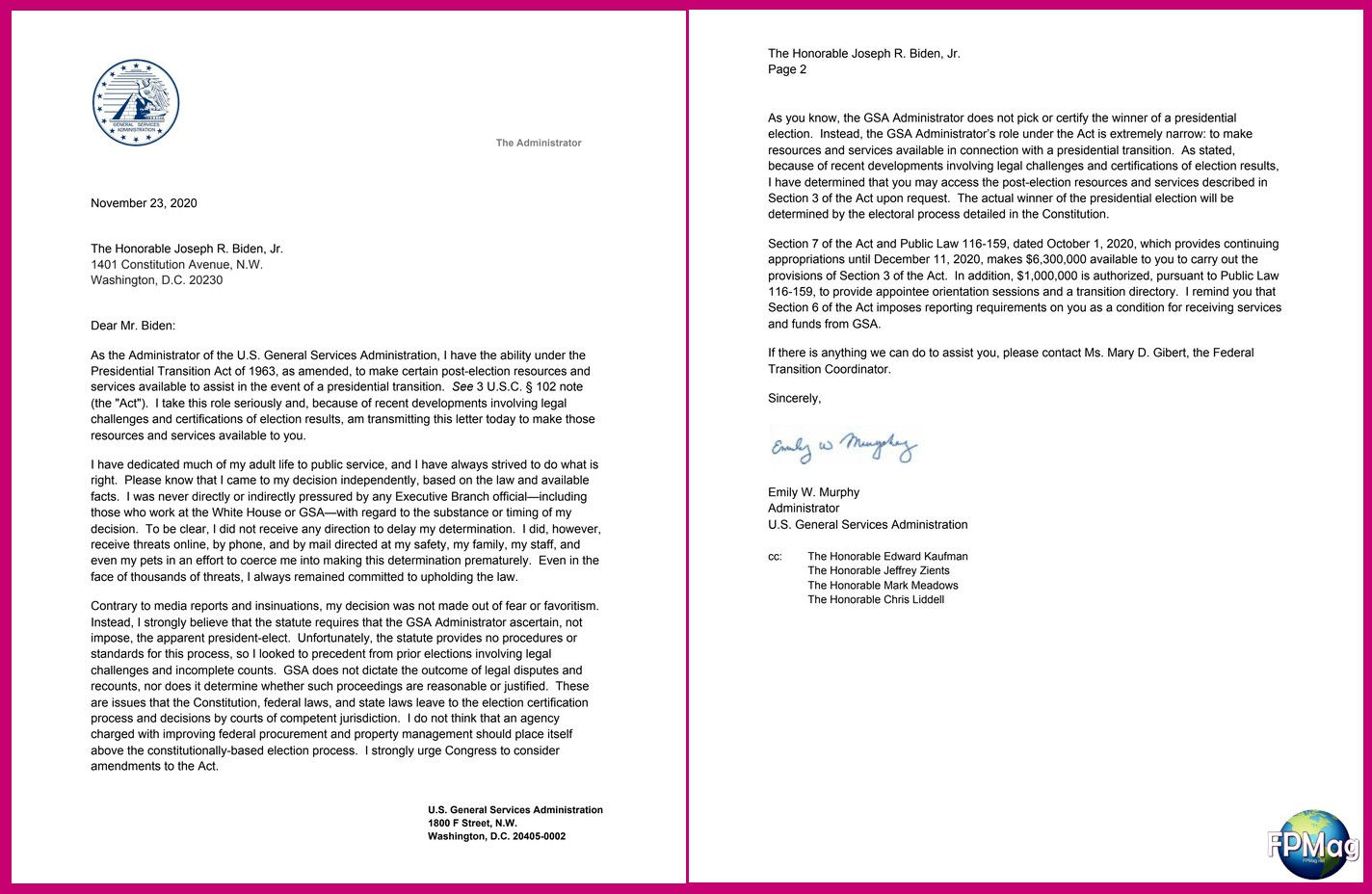 The US General Services Administration sent a letter (above) dated Monday to President (elect) Joe Biden, commencing the official transition from the previous administration to the new Biden administration.