“This pandemic is not rounding any turns, and it is not ending,” counters the biostatisticians led by Dr. Fred Harris from the Civil Society Partners for COVID-19 Pandemic Solidarity in Singapore. He responded to a question about Donald Trump’s outrageous lies that the SARS-CoV-2 pandemic is rounding corners and coming to an end.

Trump is publicly attacking at least one of the eminent experts in the world who said in an interview with The Washington Post that the United States is entering a period of “a whole lot of hurt”.

This article will explain why, around the world, scientists believe Dr. Fauci understated his case despite Trump’s promise to a crowd to fire Fauci.

A public battle broke out between a grifter  who got a “D” in Grade 8 science (as far as he went), and the Doctors. All Doctors, now virtually led by a 79-year old veteran with the bedside manner of a SAINT!

Trump has not saved lives as he claims, he has endangered Americans in the millions. Photo Credit: Twitter Video Capture. Art/Cropping/Enhancement: Rosa Yamamoto FPMag

Trump’s disordered brain, his illegal militias, and his amateur quasi-fascist cult leaders (his children) are verbally decimating all doctors saying MDs just want money so they lie and say SARS2 is deadly. But it probably is deadly. Over 11,000 medical practitioners got sick from SARS2 and a thousand died while saving American lives. Moreover, USA deaths due to COVID-19 numbers are radically understated as readers will see. Continue reading.

Fact Checking: Mr. Trump did not save millions of lives. He has almost certainly contributed to the deaths of a million Americans by next April.

Donald Trump with Jair Bolsonaro of Brazil and Narendra Modi of India have jeopardized the health and the lives of billions by allowing COVID-19 to ravage their countries and contribute more than half the world’s infections to the detriment of the human race. 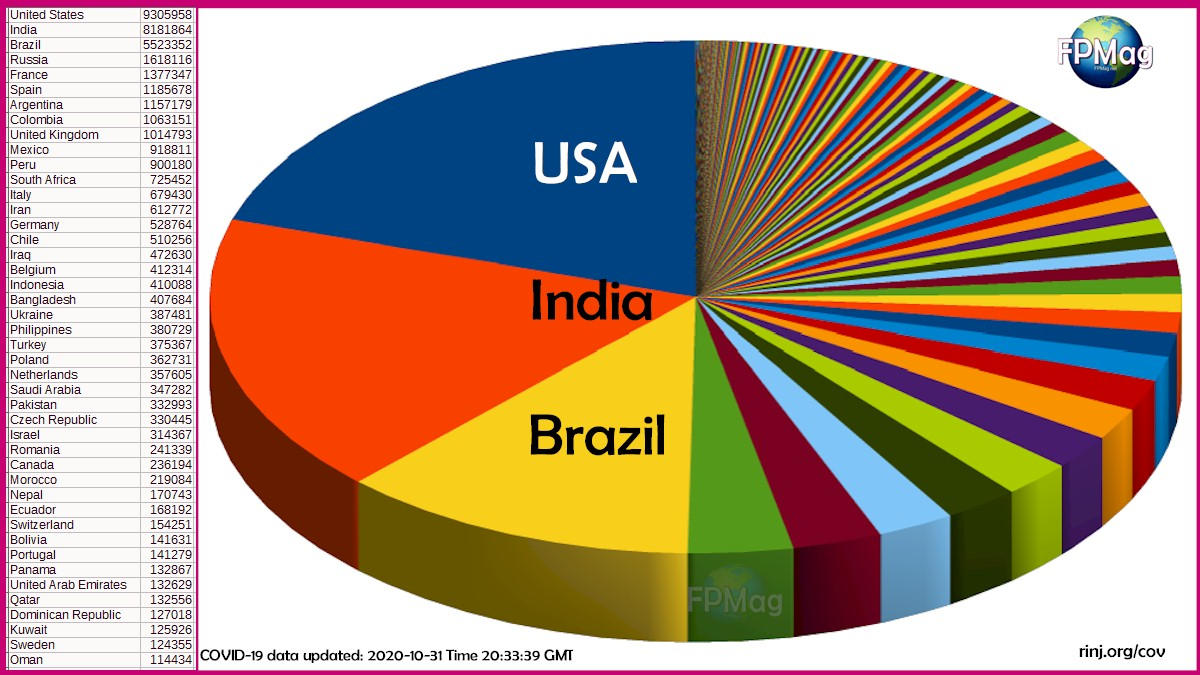 Fact Checking: Death rates are not dropping. America is seeing the same percentage of deaths on a lower number of infections a month ago. The 2.6% CFR will apply to today’s 100,000 cases and hence the estimate of 2500 daily deaths is valid. That’s over 920,000 per year and that is what the first year of COVID-19 will look like, roughly a million actual (excess above normal) deaths by April 2021.

It is practical to assume for the sake of preparedness that Infection Fatality Rates (IFR) will increase as reinfections occur because a previous course of COVID-19 creates a comorbid condition of damaged cells and incipient thrombosis in some cases.

Reinfection may be substantially worse even for asymptomatic and mild previous cases.

By the third reinfection, because of accumulated cell damage and incipient thrombosis, the death risk is higher. Hopefully enough people are vaccinated to prevent this phenomenon.

The lead and Lag relationship of infection surges versus deaths which occur 28 days to 60 or more days after infection.

Today Americans are seeing the death rate for a period of time when daily infections were very low. The deaths (of about 2.6%) of the current daily infections will be seen starting in a month. Look at this graph carefully.

And according to one scientist FPMag interviewed, “don’t take your medical advice from a grifter who couldn’t even get past a “D” in science in grade 8, and dropped the subject after that.” 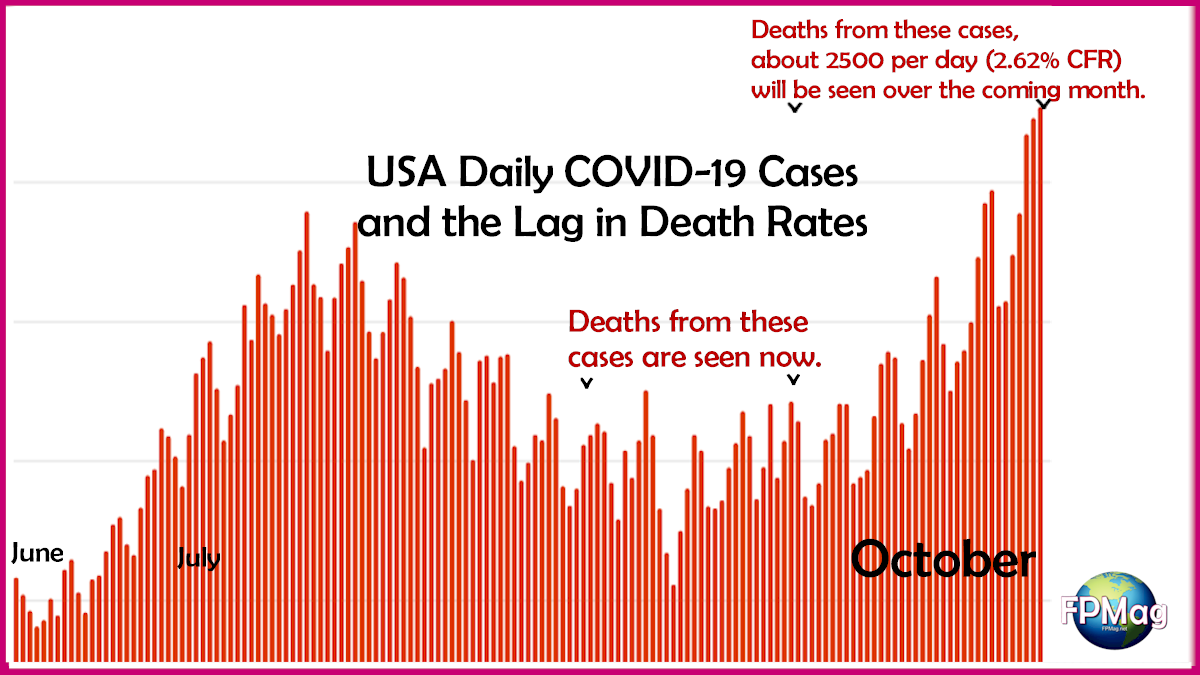 The death rate in America from COVID-19 is not declining. It remains constant per demographic profile. When older people are infected the death rate is higher. When people without comorbid illness are infected, the death rate is lower. Today Americans are seeing the death rate for a period of time when daily infections were very low. The deaths (of about 2.6%) of the current surge in infections will be seen starting in a month. Look at this graph carefully. Source:  Civil Society Partners for COVID-19 Pandemic Solidarity

“With all due respect to Anthony Fauci ‘A whole lot of hurt,’ is an understatement,” says doc Harris, very softly, from Singapore.

“A whole lot of hurt.” Half a million deaths by February. Another Half Million by April. Source:  Civil Society Partners for COVID-19 Pandemic Solidarity

The graph above and its story. This graph is generated by an indigenous computer modeling programme that uses enormous amounts of data to compile an American excess deaths count that is useful when compared to expected daily death rates calculated over fourteen previous years. As a likely measure of actual COVID-19 deaths and future deaths it concurs with the US Centres for Disease Control (CDC) calculations to date.

This algorithm/graph has been tracking data accurately since before 23 May 2020 but according to computer scientists with Civil Society Partners for COVID-19 Pandemic Solidarity, it wasn’t perfected until the end of May.

What that means is that the path to one million excess deaths due to COVID-19 by April 2021 is steady and likely true. Moreover, it will continue into the future in lulls and and surges.

At the start of today,  the USA reports via the government-funded Johns Hopkins University, 230,972 American deaths from COVID-19.

The data in this graph below indicates a different number, the actual excess deaths that are the most likely true count of the SARS2 scourge: 314,142.

The goal for the original data selection  is to set out a general direction the trend is taking. THis helps medical officials to estimate their needs for beds and medical equipment. Currently it is realistic to expect 500,000 deaths from COVID-19 in America by the end of January 2021, and that could grow to one million by early April. This indicates that hospitals will not cope in most American cities.

Above Graph: USA heads for 196 million COVID-19 Infections & 8.2 million deaths over the coming years as a modest estimate. The infection death rate (IFR) will likely be worse than current estimates for the following reasons.

Identical thinking: The University of Washington’s Institute for Health Metrics and Evaluation (IHME) predicts 500,000 reported case fatalities (CFR) by February 2021. Civil Society Partners predict 580,000 of excess deaths that are most likely caused by COVID-19 disease and closer to what biostatisticians believe will be revealed as the final Infection Fatality Rate (IFR).  Infection Fatality Rate is only learned with full accuracy after the pandemic has ended, however it ends.

The picture is plain to see. There is a very wide consensus that Doctor Anthony Fauci is correct in using lay terms to the American people, to indicate America is about to be in a “whole lot of hurt” and “could not be positioned more poorly”.

Mr. Donald Trump’s do-nothing and force herd immunity unethical scam will not work with a coronavirus. Never did. Never will. Only a good vaccine that bolsters T-Cells while people wear masks and socially distance themselves from others, will deny all future hosts to the SARS2 monster.

Mr. Donald Trump claims that the SARS2 pandemic is coming to an end. That is very dangerous lie.

The pandemic is just beginning and having warmed up through its incipient stage will begin its first phase of slaughtering the human race until humans like the bats learn to suppress the novel coronavirus.

Humans need to learn timing and number of cycles the SARS2 virus will re-infect humans before death is inevitable. COVID-19 becomes an underlying vulnerability to itself after the first infection. It will go through the population once and start over again.

Civil society has been warning of dire consequences for the United States since mid year.

Fred Harris and his team explain that they initially looked at the model’s of Dr. Neil Fergusson’s team.

Dr. Neil Morris Ferguson OBE FMedSci. is a renowned and brilliant British epidemiologist and professor of mathematical biology, who specialises in the patterns of spread of infectious disease in humans and animals. (Citing Wikipedia, a neutral source.)

“Their team at the Imperial College of London built a bio-statistical model with a mathematical bias that appears to benefit from using data from literally a dozen pandemics, even a few not often discussed today.”

Professor Ferguson is the Vice-Dean at the Faculty of Medicine, School of Public Health at Imperial College of London.

“But the key factor I liked was that we had something to think on that resembled what is happening in the United States, and to some extent, Canada. This ‘China-Virus‘ cultism really means to its members, ‘the virus is all about them not us and cannot hurt us‘.”

“Trump can sell that in America because it authenticates, or in the alternative, derives from the belief of white supremacy,” he added. And that is how my team of mostly Asians see the massive numbers of unmasked, clustered Americans screaming bizzare things at rallies like,  “lock her up”, referring to the Trump-besieged Governor Gretchen Whitmer. We also see the reticence in Canada to wear masks and the crazy groups of so-called conservatives making announcements that they are endorsing Donald Trump. But they can’t vote for him therefore they play the Russian game of election interference.”

“Hence we look at the mathematical projections in an environment where there is a cultural problem causing little to no mitigation. Some people wearing masks, ‘yes’, but under their chins or under their noses. That is not mitigation, it’s exacerbation because of the false sense of security,” adds Harris.

Listening to the experts can be terrifying but the data are realistic.” This virus is ferocious,” say all the experts including Professor Neil Ferguson.

How China defeated COVID-19 Is a worthwhile read.

“China perfected Contact Tracing, Treatment, Isolation, Observation (CTTO) and even if there is a breakout of one or two cases, the country executes an exacting plan for locating “patient zero” and all possible at-risk persons.” 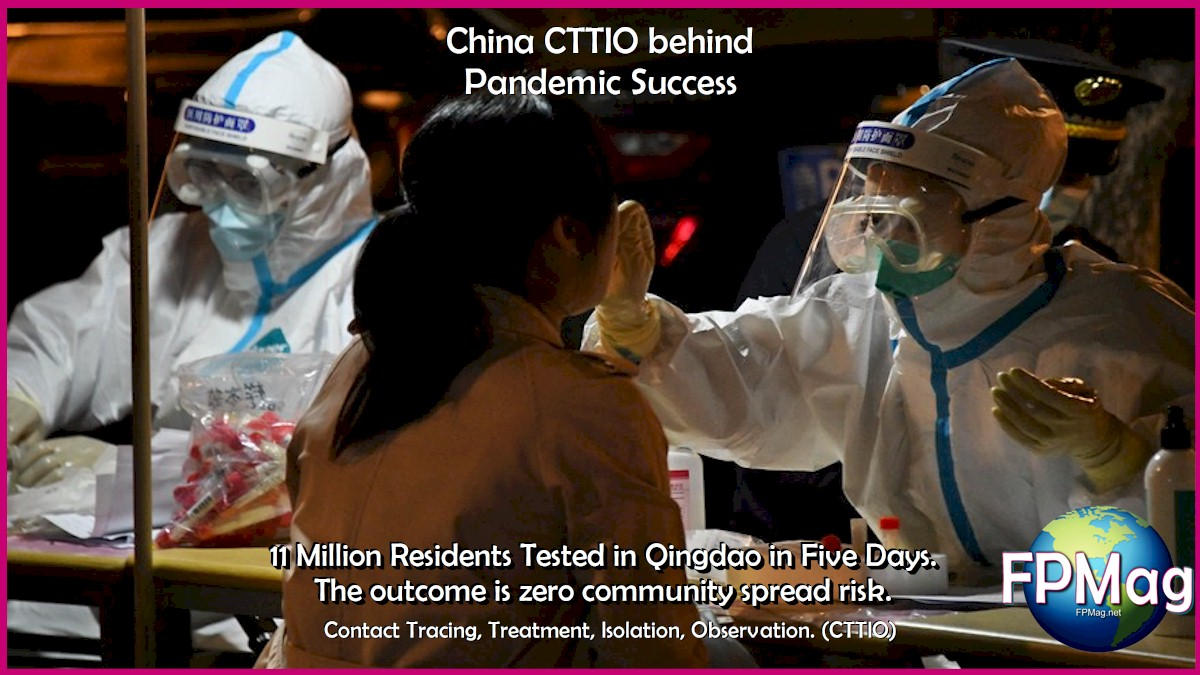 Watch and learn How Taiwan defeated SARS2 and got back to a normal life. A critical factor was mask wearing and CTTO

Director of the National Institute of Allergy and Infectious Diseases, Anthony Fauci, testifies during a US Senate hearing [File: Graeme Jennings/ Pool via AFP]

“Dr. Anthony Fauci was appointed director of NIAID in 1984. He oversees an extensive portfolio of basic and applied research to prevent, diagnose, and treat established infectious diseases such as HIV/AIDS, respiratory infections, diarrheal diseases, tuberculosis and malaria as well as emerging diseases such as Ebola and Zika. NIAID also supports research on transplantation and immune-related illnesses, including autoimmune disorders, asthma and allergies. The NIAID budget for fiscal year 2020 is an estimated $5.9 billion.”

“Dr. Fauci has advised six presidents on HIV/AIDS and many other domestic and global health issues. He was one of the principal architects of the President’s Emergency Plan for AIDS Relief (PEPFAR), a program that has saved millions of lives throughout the developing world.”  (Citing NIAID Biography)