In the cacophony of angry men blistering Washington’s chilly fall with impeachment rhetoric, something very dark jumps out.

That alleged crime is contiguous to a long-running series of attacks including the US President engaging alleged criminals to intimidate, threaten and berate a female Ambassador of the United States to Ukraine.

“Not only did Trump deliberately intimidate a Congressional hearing witness, before and during the actual hearing with the witness on the stand, but he disenfranchised each of 166 American females by belittling the substantial achievements of a career Ambassador because she is ‘the woman’,  who opposed his wrongdoing,” says a determined feminist named Monique.

The North America Atlantic Region director for a global women’s civil society group is Monique Deslaurier, an American from Maine. She says she has been following the Trump impeachment hearings after learning that two men she calls Russian thugs, (alleged criminals Lev Parnas and Igor Fruman were Trump’s disinformation campaign sources against a US Ambassador), had been harassing a female US Ambassador to Ukraine because she was not supportive of their alleged misconduct in the Ukraine.

The two males have since been arrested and indicted for serious crimes. The allegations she heard included the suggestion that they were hired by the US President or by his lawyer.

Joseph Bondy, a lawyer for Parnas, told CNN last week that, “Mr. Parnas at all times believed that he was acting only on behalf of the President, as directed by his personal attorney, Rudy Giuliani, and never on behalf of any Ukrainian officials.”

“These men acted with with anticipated impunity,” she added, “because the Ambassador is what Trump endlessly called in passionate rants against, “the woman”. The Ambassador  was opposed to Trump’s attempt at extortion against the Ukraine President, Volodymyr Zelensky.

“Hundreds of millions of dollars were at stake,” says Deslaurier. “and every day that foreign military aid was delayed, Ukrainians were falling, killed by Russian-backed rebels in the Russo-Ukrainian War in the  Donbas region of eastern Ukraine. 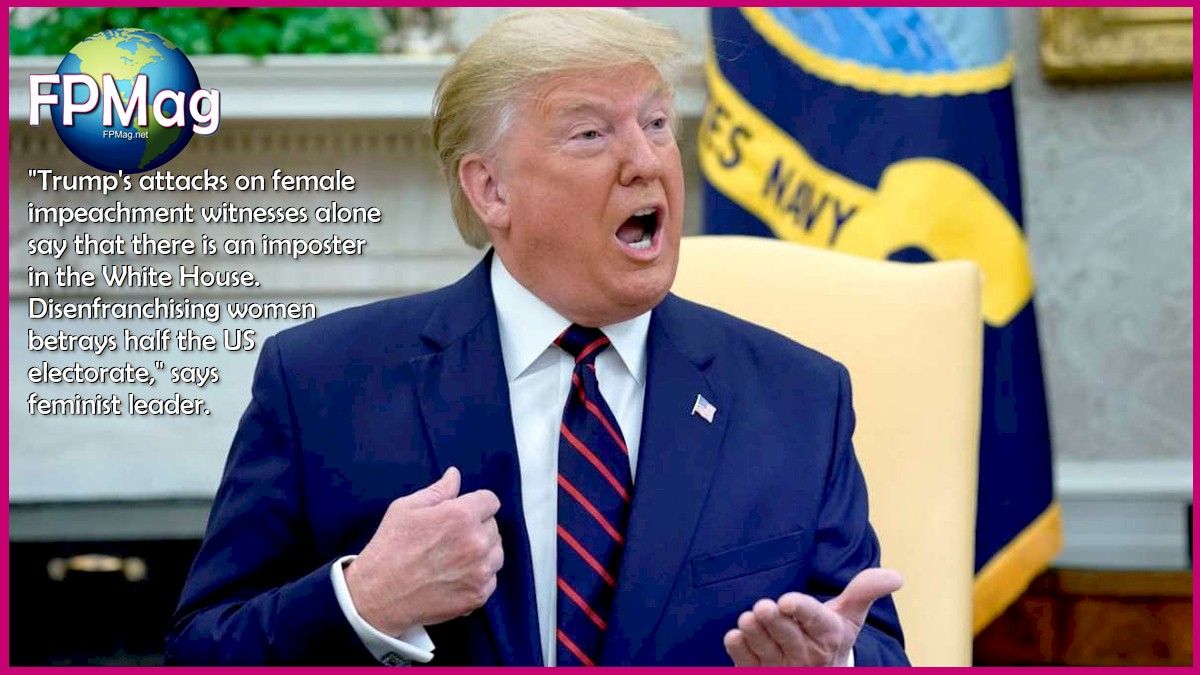 Trump has well-established himself as a misogynist-in-chief.

“After a series of underworld events that included intimidation by Russian men accused of being criminals led to an Ambassador being recalled, a tweet from the US President hit the Ambassador and literally scared Marie Yovanovitch in the middle of her testimony to the US Congress,” alleges feminist Deslaurier.

“Ambassador Yovanovitch,” says Deslaurier, “is a 33-year civil-service veteran whom many Republican politicians applauded and even thanked at the hearing”.

Everywhere Marie Yovanovitch went turned bad. She started off in Somalia, how did that go? Then fast forward to Ukraine, where the new Ukrainian President spoke unfavorably about her in my second phone call with him. It is a U.S. President’s absolute right to appoint ambassadors.

Tell Jennifer Williams, whoever that is, to read BOTH transcripts of the presidential calls, & see the just released ststement from Ukraine. Then she should meet with the other Never Trumpers, who I don’t know & mostly never even heard of, & work out a better presidential attack!

“I want to let you know, ambassador, that some of us here take witness intimidation very, very seriously,” said Adam Schiff, the Democratic chairman of the US Congress intelligence committee currently conducting impeachment hearings against the US President Trump.

“Ambassador Marie Yovanovitch had been outspoken against the parallel foreign policy of the United States being contrived and enforced by private citizen Rudolph Giuliani on behalf of Donald Trump’s 2020 election campaign,” Deslaurier summarizes.

“The Ambassador also opposed the extortion of the Ukrainian President for help in Trump’s election campaign; she had made inquiries into the withholding of Congressionally awarded $400 million in military aid to fight Russian aggression; and opposed Trump’s attempt to force the Ukraine’s President Volodymyr Zelensky to say it was the Ukraine and not Russia that interfered with the US elections in 2016,” says Deslaurier who claims that this was what motivated Trump to hire thugs to intimidate the Ambassador going back to even April 2018.

“What’s worse is that the US government is proceeding in April 2020 with criminal charges against a Russian entity with close ties to Vladimir Putin. Trump was therefore undermining the US prosecution of Russians in accordance with comprehensive indictments,” noted Deslaurier. (Read the official indictments,  Netyksho et al Indictment  Russian Internet Interference Indictment.)

Donald Trump, who claims he does not know Lev Parnas and Igor Fruman who were harassing Marie Yovanovitch and also were the source for Trump’s disinformation campaign against her, has been photographed with Parnas and Fruman on at least these ten occasions going back to 2014.

Parnas and Fruman have strong pro-Russian associations in Ukraine. They were advocating on behalf of Ukrainian Dmitry Firtash, who had partnered with now imprisoned Paul Manafort, and was a significant supporter of Ukraine’s pro-Russian political Party of Regions. He allegedly has deep ties to Russian organized crime.

“Trump may claim he is not a ‘Russian Asset‘, but if deeds speak, he most certainly must be an asset of the Russian FSB or at least the Kremlin,” quips Deslaurier.

Says Deslaurier, “Ambassador  Yovanovitch worked hard to advance American Foreign Policy which was to keep Ukraine whole and not annexed by Russia, but Trump’s parallel secret policy directed through Giuliani was different.”

“Trump calls Ambassador Yovanovitch the woman. Trump and his minions including Rudolph Giuliani launched an acidic hate campaign against Yovanovitch going back to the spring of 2018 to discredit her straight edge [honest]  approach to diplomacy and her criticism of the project to blame 2016 Russian election fixing on Ukraine. Trump used alleged Russian criminals who are tied to illicit funding of 2016 election campaigns [alleged in an indictment against them] on what at least one of them has admitted was a secret mission on behalf of the US President”.

“Donald Trump felt he needed to launch a destruction campaign against an extraordinary top US woman diplomat who has served five Presidents. Trump did this in order to clear a path for his illegal activities in the Ukraine. Her American sisters want Trump impeached for his abuse of a valiant patriot,” says feminist.

This is a video of the opening remarks of Yovanovitch to the Congressional hearing recorded by C-Span.