In a recent meeting with its security agency, women of The RINJ Foundation complained about a child molestation ring that because of information sharing with law enforcement resulted in further sexual violence by law enforcement victimizing the children.

“I haven’t ever in my life heard Katie in such a rage,” the Executive Director of the Civil Society women’s group RINJ told FPMag.

Karrina Angeles walking out of the meeting said in WhatsApp, “they want American social media platforms shut down.”

She snapped a picture of  a handful of documents with screen capture images of social media content that would make most people vomit, and according to a recent court decision caused Facebook to agree to pay $52 million to thousands of Facebook workers who have suffered psychological damages  from reviewing posts depicting acts of suicide, murder, child abuse and other atrocious content. But this content is what Facebook sells. “And what about the victims?” asks the women.

Hence the core issue is that Facebook and Twitter make billions of dollars from advertising placed by mass murderers like Vladimir Putin, Rodrigo Duterte and Donald Trump among others.

Mass Murderers, Rapists and Misogynists are what the Women’s complaint says.

Trump started 2020 by mass murdering over a dozen Iraqi and Iranian citizens in Baghdad on 3 January. Trump also put a bomb into a school bus in Sana’a Yemen on 9 August 2018 and was responsible for the death and rapes of many children he forced border guards to take from the arms of their migrant mothers.

Putin is made infamous in documentaries of  his sordid past slaughtering civilians in their apartment buildings to create a crisis he would then solve to become elected Russia’s President.

Donald Trump today endangers people of  countries with weaker health care systems by defunding and dismantling the World Health Organization in the midst of a pandemic all around the world.

“Many were just kids with a limp,” says nurse Karinna Angeles.

“All four of these men pay in aggregate billions of dollars to Facebook and Mark Zuckerberg to enable them to have the power to continue to do their crimes,” said Katie Alsop of The RINJ Foundation.

“These men tell no end of lies and neither Facebook nor Twitter challenge the mistruths, they grab the money and run. They make me sick while they make others dead,” the human rights activist added.

Meanwhile FPMag has proven that women leaders and some men have returned a very different result.

When you unblur the truth it becomes clear the matter is about “greed versus human rights”. 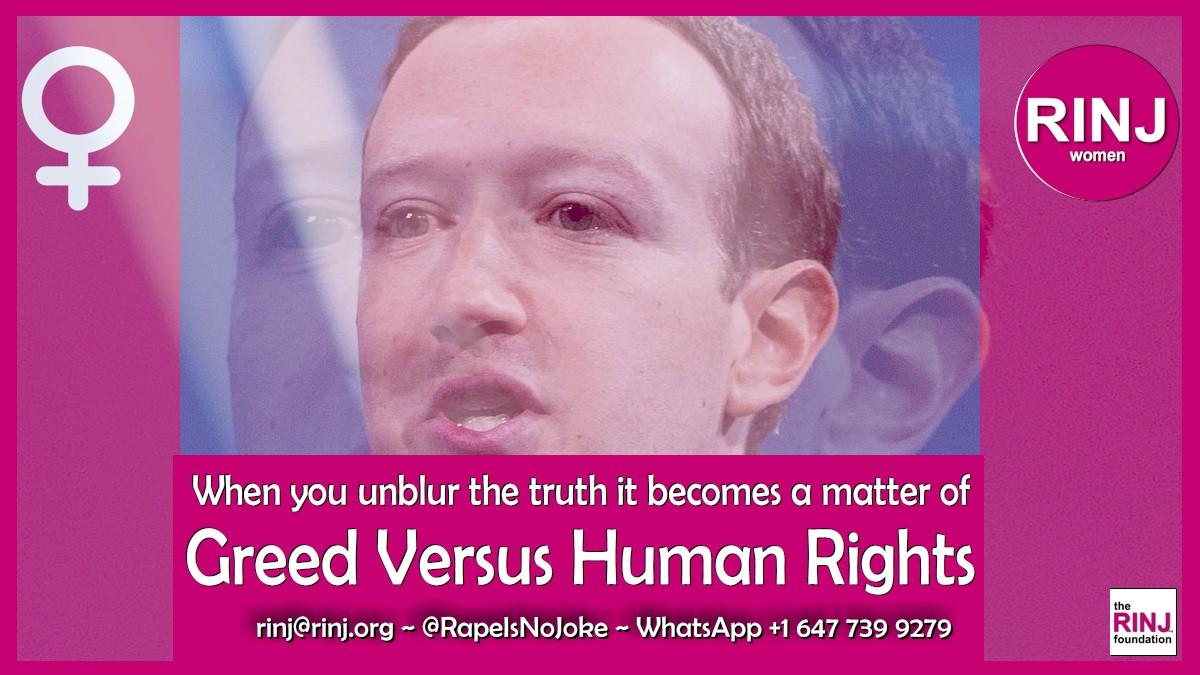 Image courtesy of The RINJ Foundation. “This spring a US Court said Facebook must pay $52 million in damages to moderators who necessarily viewed the photographs of murder, rape and torture Facebook was using to sell advertising, but what about the victims?”

In a communique sent to Twitter and to FPMag, the women said that they were
“Warning American social media against promoting mass murder, misogyny, rape and incest.”

The statement goes on to say that “Civil society must hold those who facilitate aggressive crimes against humanity to account by legal and more creative extra legal means because nothing else now functions to protect children and their families.”

“Impunity for Mass Murder, Rape, Torture, Racism and Misogyny is what social media corporations count on,” say the women.

The allegation is supported by the fact that the referenced crimes have been done with complete impunity.

Trump says he can sexually assault any woman with impunity. Duterte says he can murder anyone he wants and there is nothing anyone can do about that.  These men live by Putin’s multi-decade examples. For Putin, murder is a way of his life. Bolsinari revels in the examples he follows.

The International Criminal Court sat on numerous complaints for years.

The women appear to be accurate in their assertion that Civil society must take the “extra-legal” action into their own hands.

Is that anarchy or revolution, FPMag asked.

The malign actors will face a “bloody revolution” that is soon forthcoming unless society rapidly changes direction away from hatred and violence.

“If it saves lives and the  human race, maybe Revolution is what is needed,” said Katie Alsop.