Hearts are breaking since on Wednesday, 29-year-old Regis Korchinski-Paquet, died in Toronto from a fall from her 24th-floor balcony at her 100 High Park Avenue apartment building.

The young lady suffered epilepsy as well as some recently exacerbated mental health challenges, according to her family. Her mother with whom the deceased woman lived told the public on several occasions since the time of the event that she had called police to obtain assistance in transporting her daughter to Toronto’s emergency mental health care unit. Police arrived, the obviously distraught mother said, and allegedly killed her daughter by pushing her off the balcony.

Cops have been telling media in anonymous statements that, “it was a suicide”.

According to Regis’s mother, she and the decedent’s uncle were gruffly told to wait in the hall. The next-door neighbour claims to the media that she heard calls for help from the deceased woman three to five times and then there was silence. This information is corroborated by family members’ statements.

Eight Toronto Police Officers, alone in a High Park apartment unit, a small apartment, could not prevent the death of Regis Korchinski-Paquet who somehow went over the balcony to fall some 70 meters to her death.

This tragedy has High Park communities of Toronto upset; some in a rage; numerous netizens on social media spinning the events into a current #BlackLivesMatter crisis; and some planning demonstrations for the weekend.

The story line on social media feeds a racist thread and numerous community members are claiming that there is a crime involved and allege (paraphrased) “that Regis Korchinski-Paquet had become rude with police; an altercation between the 8 cops and the woman broke out; and police ended up throwing the woman off the balcony as Regis cried out to her mother for help”.

But only the eight police officers were in that apartment hence the community doesn’t know what happened.  That any tweeted accounts of the event cannot be fact checked is clearly apparent, a solemn fact that discredits most speculation leaving whispered police accounts uncontested.

The Toronto Police Services (TPS)  Chief Mark Saunders says that the 100 High Park Avenue woman’s death matter is about disinformation and that Toronto Police Services is handicapped because of a process that temporarily demands police silence on the case until a special investigative unit (SIU) completes its study of the matter. He implies that there is special information he could adduce that would exonerate police which to media looked like a breach of the rule of silence that introduces interference in an Ontario provincial Special Investigations Unit (SIU) study.

In absolute terms, the SIU never wins convictions in matters where police violence is alleged. FPMag will share some details about one exception, a mental health case involving a death that was SIU-prosecuted successfully, giving some small measure of closure to the Yatim family which lost their emotionally challenged teen son Sammy in 2013 on a police call response.

Mark Saunders didn’t waste much time inadvertently calling into suspicion the actions of 8 Toronto cops alone in a room with a black girl who ended up dead after a 24-story fall to the ground, Wednesday. Timing of this incompetence could not be worse.

“Police incompetence is more likely than racism or intentional death so hold your demonstrations until the SIU get’s this right. The SIU will always favour a winning court prosecution if it can succeed,” says mental health care nurse.

The reaction to Saunders’ press conference has been swift and angry incredulity. That’s understandable. The police chief misread the environment, the culture, the timing and all indications of this event.

“Saner heads should prevail with the request for calm patience, than those agitated communities already suffering in sadness from ‘COVID-19 Lockdown Syndrome‘,” says a mental health care nurse in the University of Toronto Hospital System who prefers not to be identified because she does not have the authority to speak on behalf of her hospital.

“This is too sad an event that very unfairly struck communities that already suffer loneliness, hunger, joblessness and fear of a ferocious disease that threatens everyone’s lives,” said nurse Anna whose last name is being withheld.

“The Police Chief’s self-serving political statement didn’t help,” added a Toronto doctor. “It brought difficulty for the SIU. It implied that eight cops alone in a room with a young woman should not be held responsible for her death. That would therefore imply that the public in Toronto  should not call 911,” said Dr. Anderson of The RINJ Foundation, a global human rights group that was very vocal during the hundreds of  false-arrest calamities that befell Toronto in 2010. These criticisms of Toronto Police happened during the Toronto Police Services human rights fiasco at Queen and Spadina streets. Also RINJ was instrumental in organizing demonstrations in Toronto following the January 2011 crisis that brought out thousands of women demonstrating in the streets when cops told women not to dress like sluts if they didn’t want to get raped.

According to Dr. Anderson, “the woman’s group is demanding clear professional answers and not the political response of the police chief. Meanwhile the global woman’s group is also cautioning the public that given the relationship and past criticisms of TPS, they would tell you if this was a racial matter. It isn’t.”

“Mental health 911-calls can be unpredictable to a high degree, and suicide should not be ruled out,” says Anderson.

“Police attending mental health patients where there is a clear indication of severe failure of impulse-control symptoms is a mistake,” the doctor added.

“Police don’t have a relevant system to rely on. Police wouldn’t know what a medical practitioner knows about this type of matter and its indications of pending events which in this case were clear then and in past events we have looked at with this patient’s history, according to the family.”

“Nurses in psychiatric wards handle these types of emergencies every single day, with great success” added the doctor.  “Those are the skills which are indicated in mental health matters, not belligerent men with guns, or police politicians trying to relieve themselves of responsibilities. Whoever was in the room with Regis has some accountability for at least a good explanation of the events leading to the death that took place.” 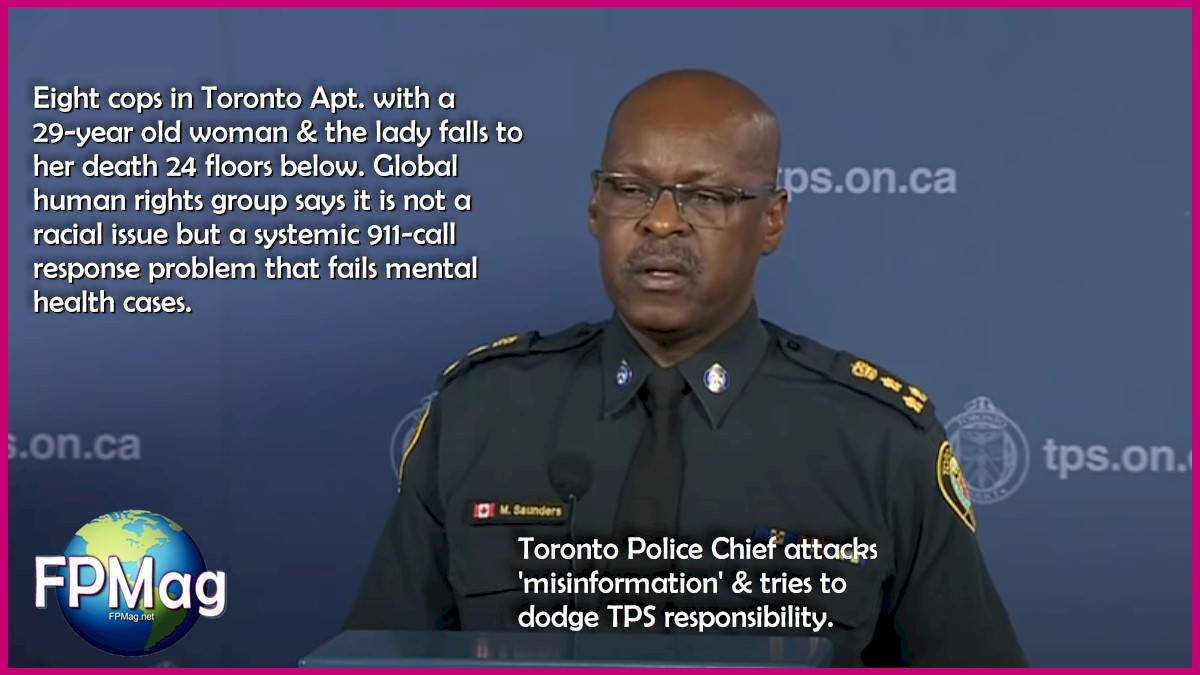 Eight cops in Toronto Apt. with a 29-year old woman & the lady falls to her death 24 floors below. Global human rights group says it is not a racial issue but a systemic 911-call response problem that fails mental health cases. Toronto Police Chief attacks ‘misinformation’ & tries to dodge TPS responsibility.

But the Toronto police chief’s ineptitude for public relations and insensitivity to Toronto Police attendance on mental health patients leading to death as in the case of Sammy Yatim in July 2013, should not lead the public down the race-riot path.

Unless Regis comes back from the dead and says “They did not do this,”  nobody will believe in cops’ competence in the matter.

regis was thrown over the balcony for an unknown reason and her body was left there for at the time of that story being posted, an hour pic.twitter.com/QaXbGrLR9B

Notes Anna, the mental health-care nurse,  “People are still trying to figure out how beloved comedian and actor Robin Williams, a favourite in Toronto since his famous interviews with CBC’s revered Peter Gzowski in an impulsive moment, could have killed himself.”

“Sadly, Torontonians have suffered through a beastly attack by a novel coronavirus that has killed dozens and forced millions into incomparable solitude, locked up in their homes. And we can’t even hug each other…”

“So what really happened is that another mental health matter was being solved by police and not by mental health professionals hence the people of Toronto need to make that their focus.”

#regiskorchinski was pushed off the balcony earlier today by toronto police and they’re trying to cover it up by saying it’s a su***de. pls say her name and spread the word so they can be held accountable!!! #BlackLivesMatter pic.twitter.com/mDDYncSiWo