Comment: Leave Hong Kong be. Beijing has it. Calm Down.

A city nation called Hong Kong is not going to happen. Hong Kong is broke because it frittered its independence in firebombings in a year full of mayhem.

Then arrived a microbial threat to the human race and slammed what little fortunes Hong Kong had left. Those outsiders who had hoped for an independent Hong Kong should not have adduced interference that risked HK’s destruction. It’s over.

Recent evidence of compassion and care in the handling of the Hubei province corona-virus epidemic should be encouraging to watchers of Hong Kong. Xi Jinping stepped up and fought like a bear for every single life that could be saved in Hubei province. Being close to that on the medical side provided FPMag a fleeting glimpse of inherent greatness.

China can handle the people problems in Hong Kong. The superstitions among some communist party directors-general that led to outrageous misunderstanding of Falun Gong eccentricities and the paranoia thinking that Uyghurs in Xinjiang region of Northwest China were all potential ISIS psychopaths, doesn’t fit the Hong Kong problem.

It appears that the communist party in China does not exactly understand the problem in Hong Kong but President Xi Jinping has clearly demonstrated that he has what it takes to solve even bigger problems. Who could have known?

The only question that needs to be answered now, is how can the destructive violence threatening the HK women, children and their families be stopped.

The peanut gallery of zero-empathy leaders in London, Washington DC, Brasilia and elsewhere, where jaws are flapping and threats flow, need to focus on their own creations of calamitous mess.  Beijing will sort out the problems of Hong Kong, which it unequivocally owns but that seem to be every meddler’s wish list playground.

Hong Kong’s violence must end and the territory returned to peace with at least a modicum of its former prosperity within reason in this horrid pandemic.

The China Communist Party has tabled a proposed bill in the current equivalent of a parliamentary session to ban in Hong Kong any “treason, secession, sedition and subversion”, a move that overrides Hong Kong’s public policy makers.

The peanut gallery is going unnecessarily bonkers. Beijing had to take action as violence restarted anew in Hong Kong while a pandemic rages. The risks of doing nothing are unimaginable. 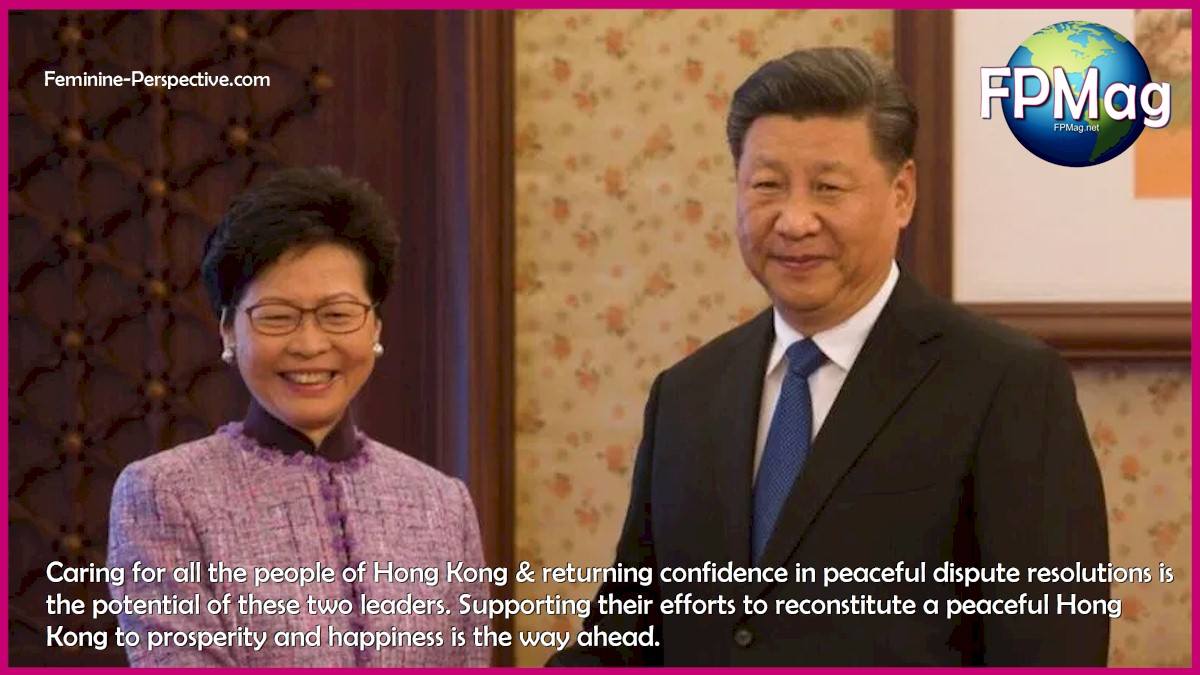 Caring for all the people of Hong Kong & returning confidence in peaceful dispute resolutions is the potential of these two leaders. Supporting their efforts to reconstitute a peaceful Hong Kong to prosperity and happiness is the way ahead. Photo Credit: Office of Carrie Lam. Photo Art/Cropping/Enhancement: Rosa Yamamoto FPMag

With sage advice of Hong Kong’s Carrie Lam, Beijing with HK can fix this, calmly. Yes. The violence is intolerable and must end.

With or without the irresponsible pranks of children and older students, the massive numbers of legitimate demonstrators had “not lost sight of the harm that overtook Hong Kong as efforts to raise legitimate concerns were hijacked by outsiders”, many have been saying for months.

The legitimate thinkers behind the original plans for drawing attention to the perception of creeping erosion of freedoms could not stop the radical factions that infiltrated their cause.

Outrageous violence of the past year by police and kids closed the territory and decimated Hong Kong’s economy. The incessant spreading violence scared the hell out of families. Many that could, left the territory.

Beijing says, ‘something needs to be done’. Of course this is true.

Pointing a finger bone of guilt at Carrie Lam is as weak as Donald Trump’s theories about ingesting bathroom disinfectants and shoving blue-light curing guns down people’s throats.

Carrie Lam with extraordinary courage and unwavering resolve has delivered a respectable effort. Her task was impossible. She had to contend with an unsolvable problem from the middle between two sides of a zero-give argument while her tool box was bare.

Revolutions require more than fire bombing children’s clothing stores and banks, you morons who did that.

Destroying ones province as a way ahead to defeat the changing theories of the central government is typical folly of misled youth. The pumping up and hijacking school kids by foreign governments is reprehensible.  And it doesn’t work.

If one can’t lead a coup to storm the government, capture the leaders and take over power, the only other way ahead is to work within the system, adduce intellectually honest and appealing concepts, find palatable compromises, all the while achieving levels of respect needed to change public policy. It’s hard work.

Throwing fire bombs is not revolution nor is it adducing viable alternative ideas with appeal. It’s only stupid violence.

Hong Kong is nearly gutted. The return to violence must be stopped.

Accepting that one cannot change governments by throwing Molotov cocktails against the Bastille walls, the banks, the subways and the children’s clothing stores is needed by the perpetrators.

Students shitting on the sidewalks and the hallways of schools, is what the morbidly obese bellicose halfwit Secretary of State in Washington is supporting, unwittingly. He should STFU. His ill-repute makes him worthless as a foreign minister. Pompeo has earned as much respect as the stinking mess the kids left in their Hong Kong school. It is about time somebody told him the truth. He acts like he is king of the world, but like the emperor with no clothes, what the world sees, it does not like.

No. Destroying fixtures and burning books as students in Hong Kong were doing at the height of protests last year doesn’t get one a respected seat at a high-level policy forum.

For the serious minded intellectuals behind the initial protests, this was a disaster and went far outside their wishes. Outsiders killed the mission.

Hong Kong Will Be OK

Hong Kong must always be free. It has its own unique formula for success and it must remain unfettered. Get it. If you don’t get it, just accept it. China cannot afford any other option. But somebody needs to stop the violence and drive the American and British troublemakers out. It’s time to be honest about that. The movement for change was hijacked by violent surrogate actors. Beijing only needs to listen to the core groups seeking assurances of human rights and freedoms. Those rights and freedoms must be delivered. Then HK works again as a global economic power centre.

There’s little point ranting about malignant actors of other states that have interfered like hooligans. It happens all too often, done by all sides, and it never works toward any good outcome.

The world is up to its collective buttocks in coronavirus and is not likely to accept violent breaches of the peace by any group that says it wants a better piece of a pie. The pie sucks anyway for everyone. Join the fight against COVID-19 or sit back and watch real winners knock COVID out.

Beijing has the right to deal firmly with lawless, violent criminals. Closing airports, interrupting commerce, even destroying businesses and disrupting family’s lives must not happen again in Hong Kong. We all have enough to contend with fighting the pathological microbes that would without even the capability of caring, destroy the human race.

Public mischief, violence against communities and any breach of the peace is totally unacceptable right now and forever after.

Suck it up. Join the fighters at Hong Kong University who seek to end the slaughter of over 300,000 humans and the suffering of 5 million horrible illnesses taking place right now.

China must use its smarts, not muscle to solve Hong Kongers’ worries.

English culture and British rule for a century followed by a shift to China in 1997 has seen capital move in and out of Hong Kong. It is a territory that can handle a little chaos from time to time. Hong Kong will be OK if China does not slip-up and overlord the solution. Law and order must respect the rights of the tired population and encourage confidence that the continual breaches of the peace have ended.

The past year has seen the business leaders flee with their families, and their capital has already begun to follow. Now it will flood out for a while but just like in the late 1990s when Hong Kongers saw everything was OK, they’ll be back. Why? Because there is no place like Hong Kong.

As Beijing figures out a way ahead to quell the violence that has been destroying the lives of neutral Hong Kong families, Hong Kong will recover.

The irony of the whole debacle is that so many of the people of Hong Kong have dual nationalities having emigrated once before with their money from Hong Kong en masse to Canada and other countries in the prelude to the 1997 turnover from Britain to China and once seeing that all was going well, home they went.

Calm. Balance. Generous respect for civil rights and the right of self determination plus allowing people to benefit from their own achievements creates prosperity and happy families.

Xi Jinping knows this and needs to take the helm as the gentle loving dad who loves his people enough to seize the levers of power and rescue the people of Hubei from a ferocious, evil beast. We watched gratefully from Shenzhen and Wuhan. That was extraordinarily good work. It’s time for the hero to shine again.