Why do Canadian Government Politicians seem so eager to kill babies? [Editorial]

Jabberwocky on induced abortion emitting from Maryam Monsef, a member of the Canadian Liberal government’s Cabinet, is shining a light on the fact that Canada has no laws on abortion.  That was a good thing until the political jabberwocky started.

Someone needs to explain to Monsef and her fellow politicians living in the horn of plenty among the obese and the privileged that in the 21st century, women should be no longer suffragettes, and should not be projected by politicians as free-love hippies or sex objects of the patriarch.

Currently women comprise as PhDs some of the ranks of the best and the brightest medical scientist groups in the world. Those women don’t talk through their Butts in this manner, they speak as equals to anyone else.

Canada, one of only a few countries that (somewhat accidentally) decriminalized the induced abortion medical procedure, suffers little abuse.

But those abuses that do happen are extremely serious and should be prosecuted, like abortion retail chain stores frivolously and repeatedly processing dangerously-frequent abortions for teens at the same rate sensible youths are using condoms.

Maryam Monsef  says “women alone –have the right to make decisions about their own bodies”.

Actually that is true of men and transgender persons as well. Each can find the compunction necessary to have healthy bodies or decide to take their bodies and throw themselves off a bridge, under a bus, or have unprotected, non-contraceptive coitus outside of their marriage or even rape someone.

All those catastrophic conducts  have contributed to putting a possible abortion case in the care of an urgent medical response team. Every case is different. And there are no politicians around, just the worries they create with their stupid narratives or poignant laws.

If you take disease like HIV and Hepatitis into consideration, each of the latter three actions can have pretty much the same outcome. But when two people make a decision about their bodies that creates a human life they have a huge responsibility for another person’s life no matter what they do with their own bodies.

The year is 2019 and women don’t need to talk about abortion as a way of birth control we talk freely about the old taboo, contraception.  Preventing pregnancy is all about preventing the egg from being fertilized during coitus or preventing a zygote from becoming a morula and implanting in the uterus. Most induced abortions or late contraceptives are done early and require the patient accept a pharmacological intervention (medicine).

The latter is the last opportunity for an uncontroverted intervention around the world. After that point where a woman has decided what to do with her body (non-contraceptive coitus)  the body takes over and makes decisions about viability. Every patient is somewhat different but as a rule of thumb you can count on roughly a four day process for a zygote to become a morula and another three days as the embryo implants in the uterine wall. At that the latter stage there is a very good chance the woman will have a baby. It’s not a sure thing. This is where the body autonomously acts if it learns of chromosome mismatches and other biological contraindications to pregnancy.

“The Fight for the Safety of Women and Children includes the Unborn Babies who can be saved. Medical practitioners save the lives they can save. The toughest induced abortions involve children because it is children who are most often raped”. 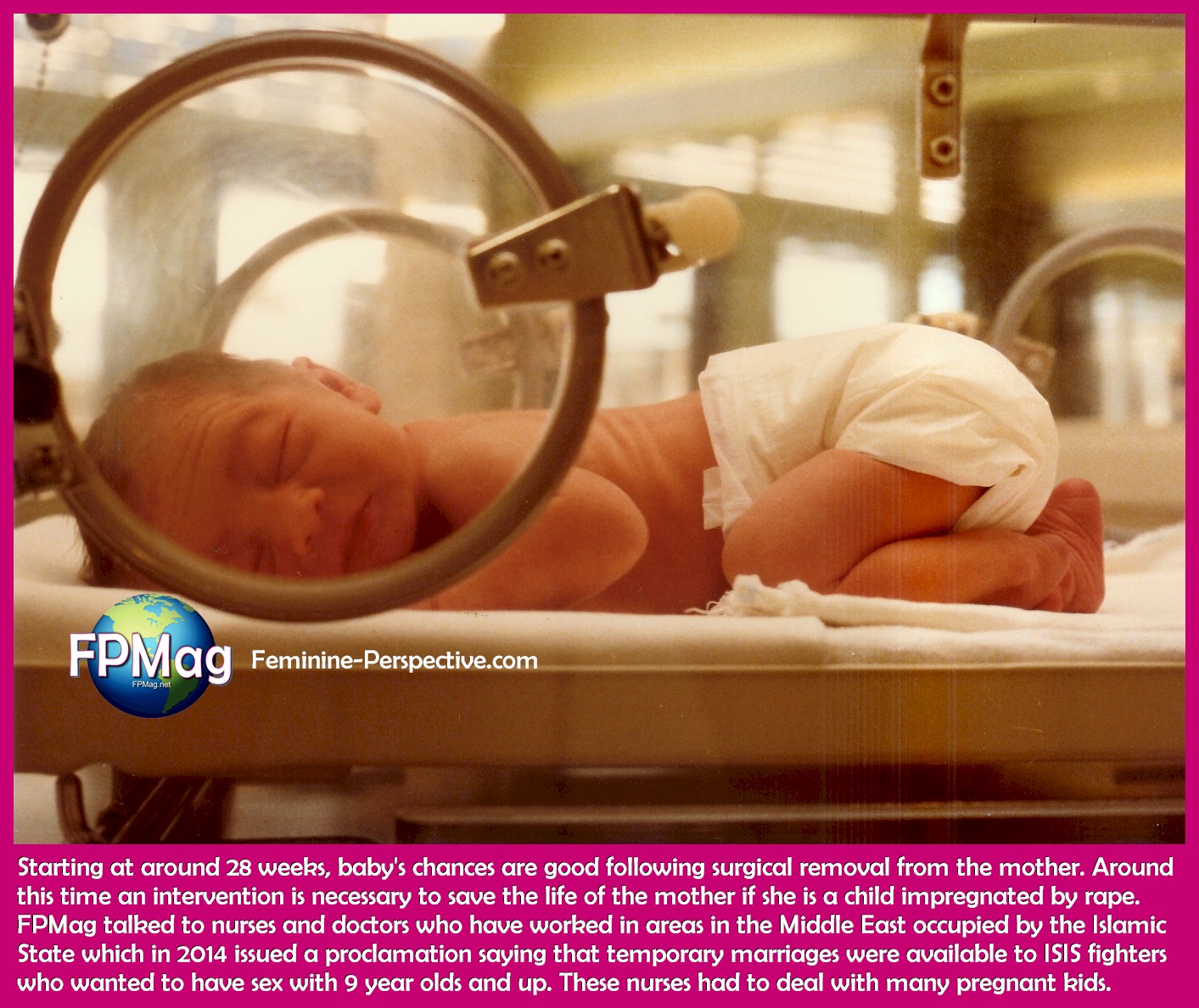 The photo and its story: Starting at around 28 weeks, baby’s chances are good following surgical removal from the mother. Around this time an intervention is necessary to save the life of the mother if she is a child impregnated by rape. FPMag talked to nurses and doctors who have worked in areas in the Middle East occupied by the Islamic State which in 2014 issued a proclamation saying that temporary marriages were available to ISIS fighters who wanted to have sex with 9 year olds and up. These nurses had to deal with many pregnant kids.

According to Sharon Santiago of The RINJ Foundation  she is not afraid to take on anyone to argue that every drop of life is precious. “Around the world we have learned that just opening your mouth about abortion or contraception can get you killed. Meanwhile it is the West that is truly backwards because its society is using induced abortion as a form of birth control and refuses to pay for women’s contraception. Backwards.”

“I have seen cases where following a bombing or shelling we have a traumatized women patient who is in her second trimester of pregnancy. Both patients are on death’s doorstep. I do not want to be bothered by jabberwocky people like Maryam Monsef when there are real lives at stake. Get lost you opportunistic woman,” she added as if to support the assertion she is not afraid to speak out. (Apparently, if I have this right, a practitioner commented on a twitter tweet of the Monsef politician about the narrative in the USA on dismemberment abortions, saying that she had been involved in saving the lives of a child and her baby. This counter view post was blocked by Monsef or her political staff creating an unholy conversation among Christian and Muslim nurses.)

Christian and Muslim nurses have strong points of view on the abortion issue as well as coitus outside of marriage. Respectively these religions comprise 1.2 and 1.8 billion adult  members hence most of the adult voting human race.  Those views are consistent with the hippocratic oath inasmuch as they encourage the zealous commitment to saving lives that can be saved, medically and surgically.

Maryam Monsef has been attacking the Canadian opposition leader for attending a coordinated “pro-life”, Real Women and  “all lives matter” demonstration. That is not only disingenuous in the context of yelling about “free choice” but also misandrist.

Katie Alsop of The RINJ Foundation, a global civil society women’s group,  suggests that experience gained around the world implies that no matter what jabberwocky politicians spew, the real decisions are taken between patients and their trained and licensed health care provider. Moreover, she suggests that, “no matter what politicians say in generalities about women’s reproductive rights these political people are are going to be wrong because every case is unique. Experience indicates these matters will be decided case-by-case by the patient and her doctor no matter what politicians think or say.” 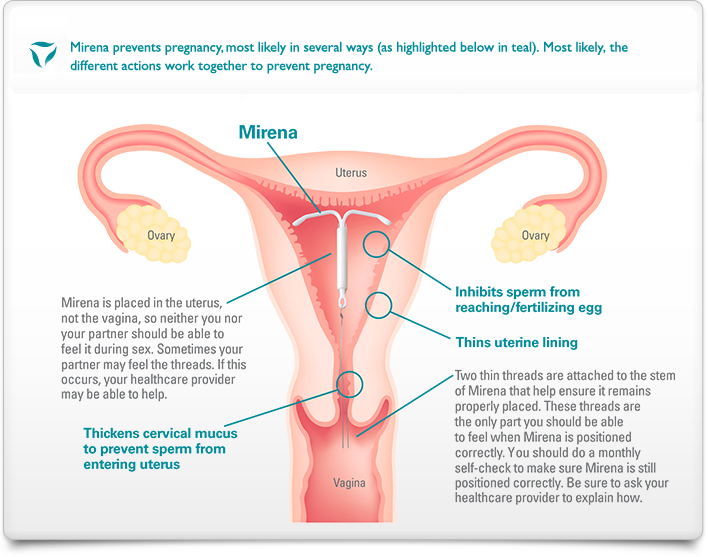 The Mirena IUS is a birth control method. It is small,  unseen, always working, plastic T-shaped device that releases the hormone levonorgestrel. It prevents pregnancy by making the lining of the uterus thinner. It also makes cervical mucus thicker, making it harder for sperm to enter the uterus. Your nurse inserts the IUS inside your uterus.

Survivors of sexual abuse need to be assured that their government acknowledges their anguish and that the people who hurt them will be punished. pic.twitter.com/gxMLm3pnVQ

This is the true face of the Conservative party on women issues. The next election will be a choice between a country that believes in women’s rights to choose or reopening a dark chapter of our history. https://t.co/WZklZYpgXs

Medically speaking one needs to use caution when speaking this way. U speak of Abortion as birth control. Mutilation abortion isn’t the panacea you think it is. A raped, pregnant 9-year-old who kept it a secret for too long is real problem in real world. https://t.co/MMLTcmjaRY

#abortion Can of worms some men think only they have entitled point of view. You delete my response to ur Liberal campaigning & gain an enemy for an arrogant cause. Not fond of men talking about killing babies. https://t.co/mxx1o06gX0 is tough for any woman. @gmbutts Sayōnara! pic.twitter.com/FBjgpuwgCl