“They (Idlib Health Direcorate) could better serve communities by accepting the necessity of war-time distributed community health care services,” say local doctors and nurses who seek “the utmost in mobility to discretely access chronically ill and acute cases in each community”. (Translated)

Women have tried to convince the men of the Idlib Health Directorate and the White Helmets that many health care workers should  serve their community by working from their homes or nondescript clinics because the Russians and the Syrian Regime are bombing hospitals, clinics, and mobile medical units. The latter is the practice observed where combatants deliberately conduct military operations to force the displacement of  large populations.

“If it’s on a map as a civilian health care facility, it will be bombed to scare the people away, such is the sick mind of Bashar al-Assad and the Iranian goons who are running his government,” says Simon Baldock, a security consultant in the region.

In recent days aircraft, from all accounts, Russian bombers have bombed two hospitals and in one case killed a RINJ EMS driver (ambulance driver), his patient, vehicle and assistant. 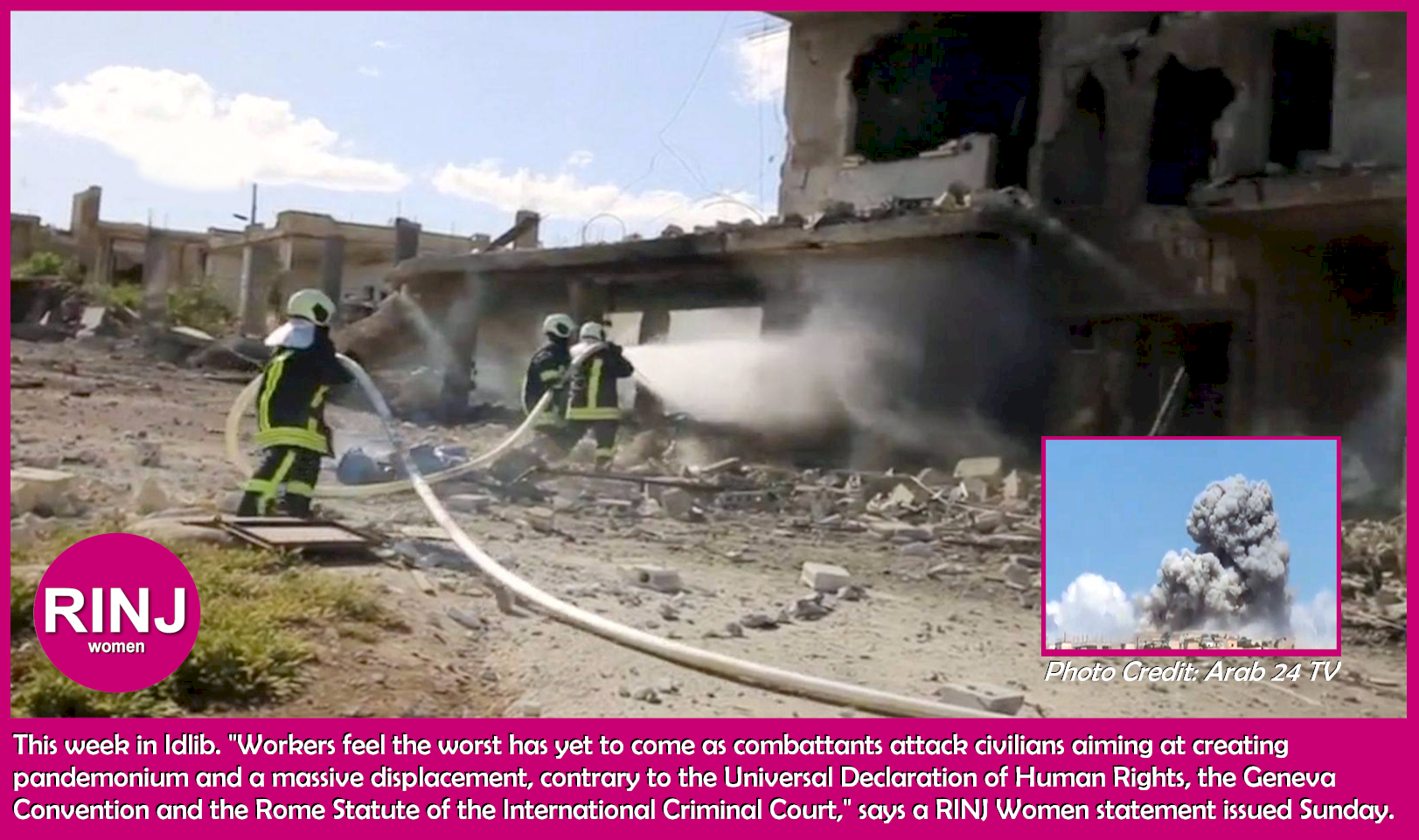 This week in Idlib. “Workers feel the worst has yet to come as combatants attack civilians aiming at creating pandemonium and a massive displacement, contrary to the Universal Declaration of Human Rights, the Geneva Convention and the Rome Statute of the International Criminal Court,” says a RINJ Women statement issued Sunday.
Photo Credit: Arab TV-24
Photo Art: Rosa Yamamoto FPMag

Losses of ambulance drivers and intake medics seems like a common occurrence in Syria. Probably that  is because of their obvious attire, their big red crosses or crescents and their urgent driving technique. In other words they are clearly identified as being medical crews.

Editorial Note: This phenomena of attacking field medics and EMS drivers may also be attributable to the passionate hate by Assad, Rouhani and Putin’s ‘lieutenants‘ for the White Helmet group, many of whose members are former insurance agents or stock brokers who joined as volunteers. This ragtag group is gaining sophistication maybe because of their drive. They are people who had  no more employment and wanted to do something useful for their community. Their medical incompetence has shown at times with contraindicated medical responses but that is out of urgency and lack of training, not wilfulness. They are a genuine community-based humanitarian group. Yes they have a passionate hatred for the people trying to kill them. Yes, that’s an apparent bias. But hatred for war criminals should be considered a normal emotion for those people who are not so immersed they have become numb to the violence as perhaps is true for this article’s authors.


Nobody loses sight of the fact that these people below are the women, children and their families that care-givers are fighting to protect. They are just  ordinary people who want to be together, to be safe and happy. Please join the fight. Donate if you can’t volunteer.

Syrians in Idlib. Nobody loses sight of the fact that these are the women, children and their families that care-givers are fighting to protect. They are just  ordinary people who want to be together, to be safe and happy. Please join the fight. Donate if you can’t volunteer. Photo credit: source supplied.

The worst attacks are happening in the south of Idlib.

Katie Alsop of The RINJ Foundation has condemned the attacks on civilian gathering places including hospitals, children’s parks, residential homes and medical clinics. 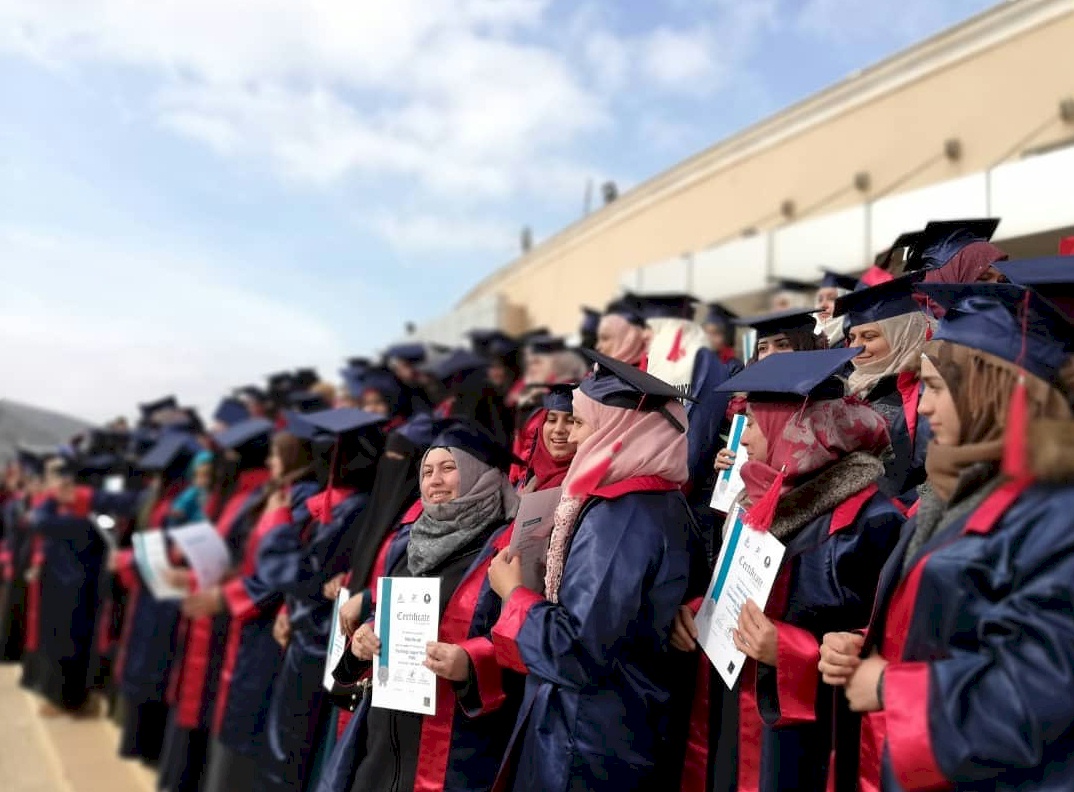 RINJ Women advance that Locally trained medical workers have the capacity to work in their own communities if courier-delivered basic resupply is conducted discretely. That means no medical emblems.  Photo Credit: Source submitted

“Idlib Health Directorate trained workers could operate in communities from their homes or from a patient’s house in a systematic war-zone technique that is less structured but more responsive to direct community needs than the Health Care System.” (Translated)

RINJ workers in Idlib province are native to Syria or neighbouring nations and operate in an alliance as a local RINJ NGO as is the case in several war zones.

Training in Mosul Iraq is expected to resume after the current purge of people who lived in the city during the ISIS occupation. At one time beginning in 2013 after ISIS pushed many humanitarian workers out of Syria, Mosul was a shipping and storage depot plus assembly and  training center in Iraq, close to vehicular routes.

American backed Iraqi Kurds have been rounding up and raping, killing or interning former residents of the ISIS era. A Kurdish source told Jessica, a RINJ nurse practitioner in Mosul that it was American CIA urging the round-up and not military officers. Ironically this is also the wish of Iranian backed elements in the Iraqi armed forces hence the crimes are being ignored if not encouraged by Baghdad. The head of the nursing school in Mosul said that wearing scrubs in Mosul is like wearing a target on one’s back. That is a familiar complaint, but one that has no apparent remedy,  when in modern wars, American and Russian combatants oppose Muslims.

“It had been hoped that Mosul could be returned to its former status,” says Jessica,  as an assembly, training, and supplies distribution centre.

“During the ISIS occupation, that role was ended and a company in Baghdad supplied medical oxygen, medical supplies and instruments until the owner of the company was robbed, shot and killed at a Kurdish checkpoint trying to deliver supplies to Mosul”, she added.

“What has happened in Mosul taught RINJ medical workers how to operate from distributed, masked community facilities. That includes community basements however, as in the case of Tamuz 17 in Mosul where Americans bombed and killed up to 200 civilians because an Iraqi Gold Division soldier foolishly called an air strike on a single sniper atop a two story roof, 10 families had congregated in basements along that street to share one single water filtration pump.

The civilians had been warned by the RINJ NGO not to congregate in such large numbers. “This is a lesson learned,” says nurse Sharon Santiago who is among her colleagues considered to be the logistics worker of miracles as the woman “with seven loaves and seven fishes to feed seven hundred“.

“When people are hungry or thirsty they will go and congregate to where the water is located. That is where they are vulnerable and where predators bomb them,” notes Santiago whose eyes became misty in memory of lost friends and their families.

As sad a statement this situation makes about human behaviour, it is no less true for being shocking. Idlib is again proving that this conduct is deliberate and not a coincidence.

“That is why smarter men than these brutes have made laws, albeit ignored laws, to prevent the attacking of some innocents,” says Santiago.

“Civilian infrastructure in the Middle East such as schools and hospitals are vulnerable to the brutal killers who bring genocidal war against civilians they dislike for race, color or creed which hatred erases all semblance of war-time concern for civilian lives. The human race has sunk to its lowest point in modern times and has begun to resemble the drawings on cave walls from paleolithic times, when humans were bashing each other on their heads with crude stone weapons.” — Katie Alsop, The RINJ Foundation

“Farah Sarmene, a 29-year-old displaced mother who arrived in Atma”, in Idlib province earlier this month, told Middle East Eye in Arabic that she was now “desperate” to feed her children as the world food programme (UN WFP) pulled out.

But as RINJ’s Dr. Buni points out after reading MME’s well-briefed article talking about the UN pullout, “they barely fed 50,000 people but there are over 800,000 families here in Idlib Governorate because it thus far has been the only safe haven, a “cease-fire zone” to bring your family if you are a displaced Syrian with at least some resources.”

* The  Idlib demilitarization was an ongoing agreement between Turkey and Russia, acquiesced reluctantly to by Iran and Syria.

The Proof of What Needs to be done in Idlib by the locals lies in the Rubble of Raqqah and Mosul. 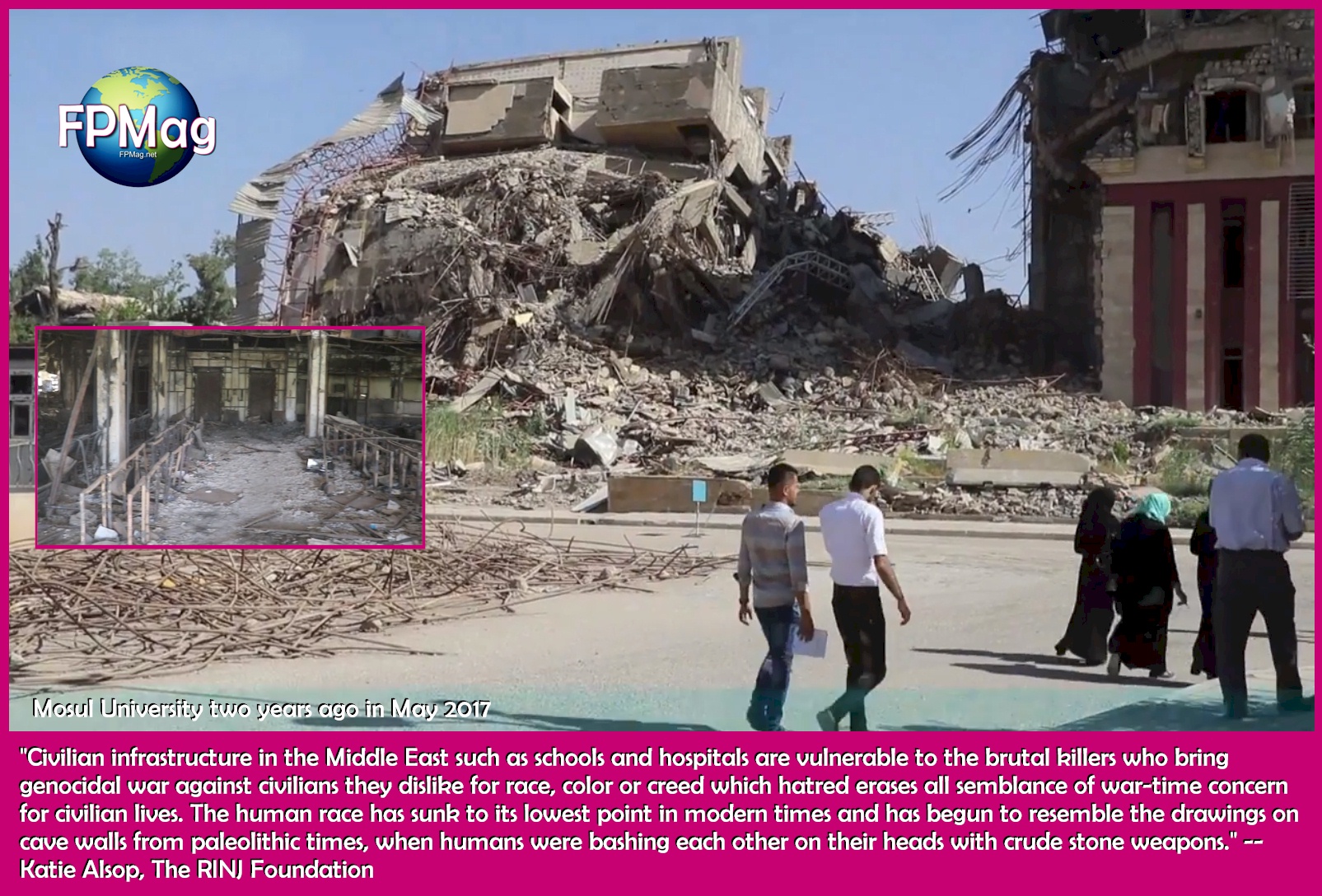 Most of the hospitals and schools in Mosul Iraq and ar-Raqqah Syria were bombed which is a categorical warning that medical workers and their facilities must become nondescript according to RINJ workers in Syria who have invented the concept of black or brown scrubs that look more like cargo pants and shirts than hospital attire. Photo Credit: RINJ Women – Facebook

Posted on November 2, 2018 by Melissa Hemingway

Refugee families returning home might be the effectiveness measure of peacemaking and humanitarian action in war-torn areas. But returning refugees might also indicate conditions in the refugee-hosting nation are so bad that anything would be better. Notwithstanding this dilemma of Syrian migrants, … Continue reading →

Posted on November 1, 2018 by Melissa Hemingway

Unsung Heroes in Syria, Recep Erdogan and Vladimir Putin saved thousands. Parties must now respect the peace in Idlib. That is exactly what medical workers in the city of Idlib are telling Feminine Perspective Magazine. by Melissa Hemingway, Feminine Perspective … Continue reading →

Questions and Answers A US-sponsored assassination of Bashar al-Assad was alleged to have been discussed or even planned by US President Donald Trump. That is not too surprising, is it? Somebody had a bullet for good people like Abraham, Martin … Continue reading →

Posted on September 13, 2018 by Melissa Hemingway

Idlib is scheduled for Total Destruction by 3-Pariahs The three-pariahs cannot be trusted. They have used chemical weapons; have slaughtered half a million women and children; attacked civilian medical infrastructure; put a price on the heads of white-coats (nurses, doctors, … Continue reading →

Stop Bloodbath in Idlib. A line in the Sand.

Posted on September 7, 2018 by Sharon Santiago

Civilian Evacuation from Idlib, Syria continues today amid bombing attacks by Russia. Most people do not have the means to evacuate. Some 3 million people in the larger Idlib region are endangered by advancing Syrian Arab Army and Russian bombers or … Continue reading →

Russian and Syrian Forces had begun their onslaught of Idlib. Another humanitarian disaster has begun. South west of Aleppo about 45 slow kilometers on the M60 is Idlib governorate and the city by the same name, Idlib. ( Or you can use … Continue reading →

RINJ WOMEN: Fighting for the safety of women and children around the world.