82.7 Million Innocent Iranian People Suffer the Supreme Bully. And he is a bit crazy.

Loudspeakers screaming “come to pray” and morality police raping women who bared a wrist: Iran is nearly as crazy as Saudi Arabia. Each has a sick-minded leadership oppressing human beings like abused cattle. Today FPMag illustrates a few unsavoury human rights violations of Iran’s leadership. Stay out of Iran if you can.

Spirituality is private and should be kept that way. Religion tends to be loudly and visibly ritualistic, polluting, annoyingly misogynistic (with the exception of Dianic Wicca which is misandrist and equally wrong-minded)  and therefore should not be a part of government bias. Large groups of population don’t subscribe to any religion with adherence and therefore don’t want evening prayer, stoning, beheading or ill-attire foisted upon them.

Here he is. The sick-minded leader who believes he is “Supreme”, so supreme in fact that he wants some atomic bombs for casual use in killing Israelis. 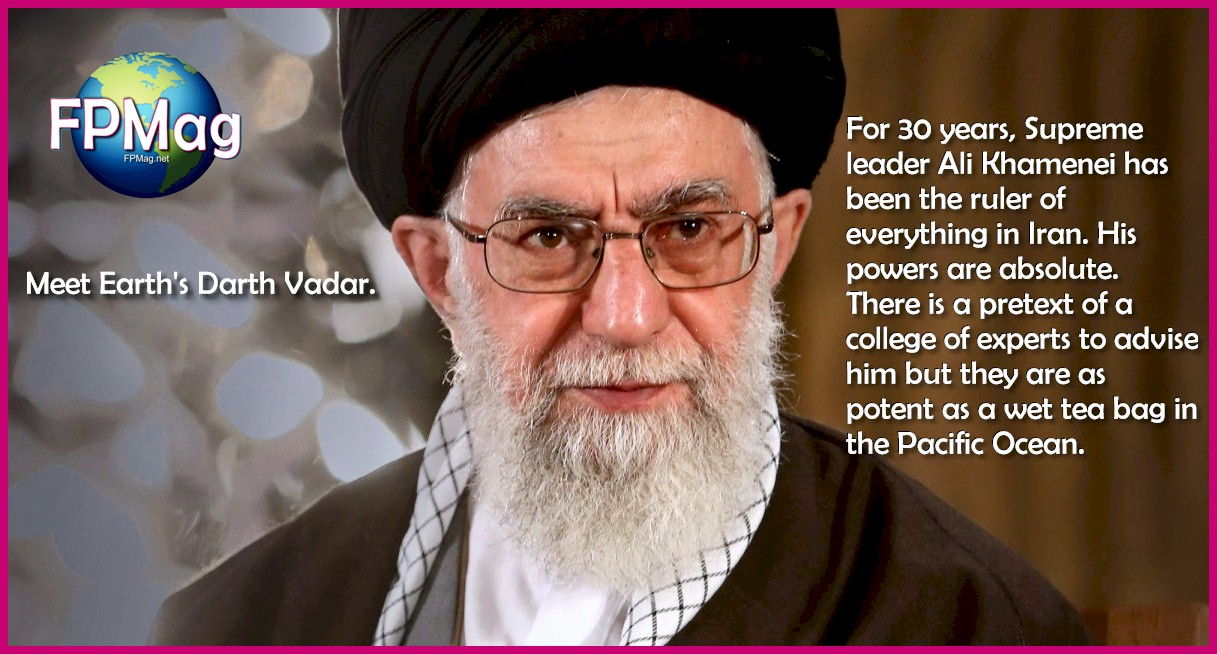 The photo and its story. For 30 years, Supreme leader Ali Khamenei has been the ruler of everything in Iran. His powers are absolute. There is a pretext of a college of experts to advise him but they are as potent as a wet tea bag in the Pacific Ocean.

Repeatedly since the 1979 Islamic Revolution, one after another official in Iran has been screaming epitaphs for Israel claiming they will slaughter every living Jew in that country.

This particular hatred is mostly about Israelis so the antagonists with the bloody mindedness are cautious to make it explicitly clear they don’t want to kill the Muslims living in Israel.

The photo and its story. The deputy head of Iran’s Islamic Revolutionary Guard Corps says he believes that Tehran’s (convoluted?)  strategy is to eventually wipe Israel off the “global political map.”

Out if the 82.7  million Iranians living in Iran, .0014 percent, or around 10,000 Iranians are Jews but they are Iranians, not Israelis by strict definition.  Hence they are officially welcome to stay. That’s a very small number considering ten times that many Iranians were Jews prior to the Islamic Revolution in 1979.

By Saturday 11 May, the UN estimated that Iran’s population had reached 82,704,322. Two of them are total jerks who lead an oppressive government. The rest are mostly amazing people.

According to Encyclopedia Britannica’s definition: “Iran has a constitutional framework. Iran is a unitary Islamic republic with one legislative house. The country’s 1979 constitution put into place a mixed system of government, in which the executive, parliament, and judiciary are overseen by several bodies dominated by the clergy.”

This clergy has some powerfully passionate hatreds, like Saudi Arabia, The United States and Israel. They are not the kind of people you want to share a few of your nuclear bombs with in case they need them on a rainy day. But they don’t want your bombs, they want to build their own. Should religious clergy anywhere in the world have nuclear bombs?

The Iran government is all about religion, Shia Islam. The Supreme leader is a devotee. That’s kind of tough on atheists and Wicca because everything is about a male god.

It’s a religion that hasn’t updated in 13 centuries hence if you are a gay you will be killed and if you are a women its worse. This “religion” is very ritualistic, quite backwards and will not fit a paradigm that includes Earth meeting intelligent beings from other planets in other parts of the galaxy and the universe.

Don’t choke on your doughnut. NASA and the US Air Force have seen things that make the people in those organizations wonder “when” not “if”.

The assumption that the Universe is governed by a ‘god’ who roamed the Middle East in the Middle Ages and only loves a certain group of humans who chop off human heads is not likely fly with higher intelligence species capable of building light-speed vehicles for visiting other creatures in their intergalactic social circles. No. They won’t like that.

Governments based on religion as is Iran’s wacko dictatorship face the likely possibility that they are wrong: there is no such god. That it’s a pile of crap meant to keep people oppressed and corrupt political bastards in power.

There is a lot about the universe we do not know. NASA and other groups have built some very fine telescopes and while some strange flying saucer shapes and even broomstick rider-shapes have been spotted, an occasional cow jumping over the moon, nobody has photographed a god with the exception of cameramen who have been image-capturing Iran’s Supreme Leader. He takes a spectacular picture too, even in his 80s.

Theocracy is not Democracy.

Democracy is on the back burner around the world with authoritarianism replacing the once fabled alternative to Adolf Hitler and his kind. That could mean that theocracy is in its time. But it doesn’t work. It could also mean that a huge global war is in the offing as each dictator seeks world governance and all humans are doomed.

Iranians Live in Fear of being Killed by Government

In Iran, the death penalty is enthusiastically handed out and it is not known exactly how many people are killed this way. Some publications imply that the number is among the greatest in the world but in fact it may not be anywhere near what the execution numbers are in the Philippines, China and other unpublished state actors. In Iran the numbers of public executions have ranged from 250-400 persons per year until 2015 and from 500 to 1000 in the past three years. But the number of non-public executions is not known. 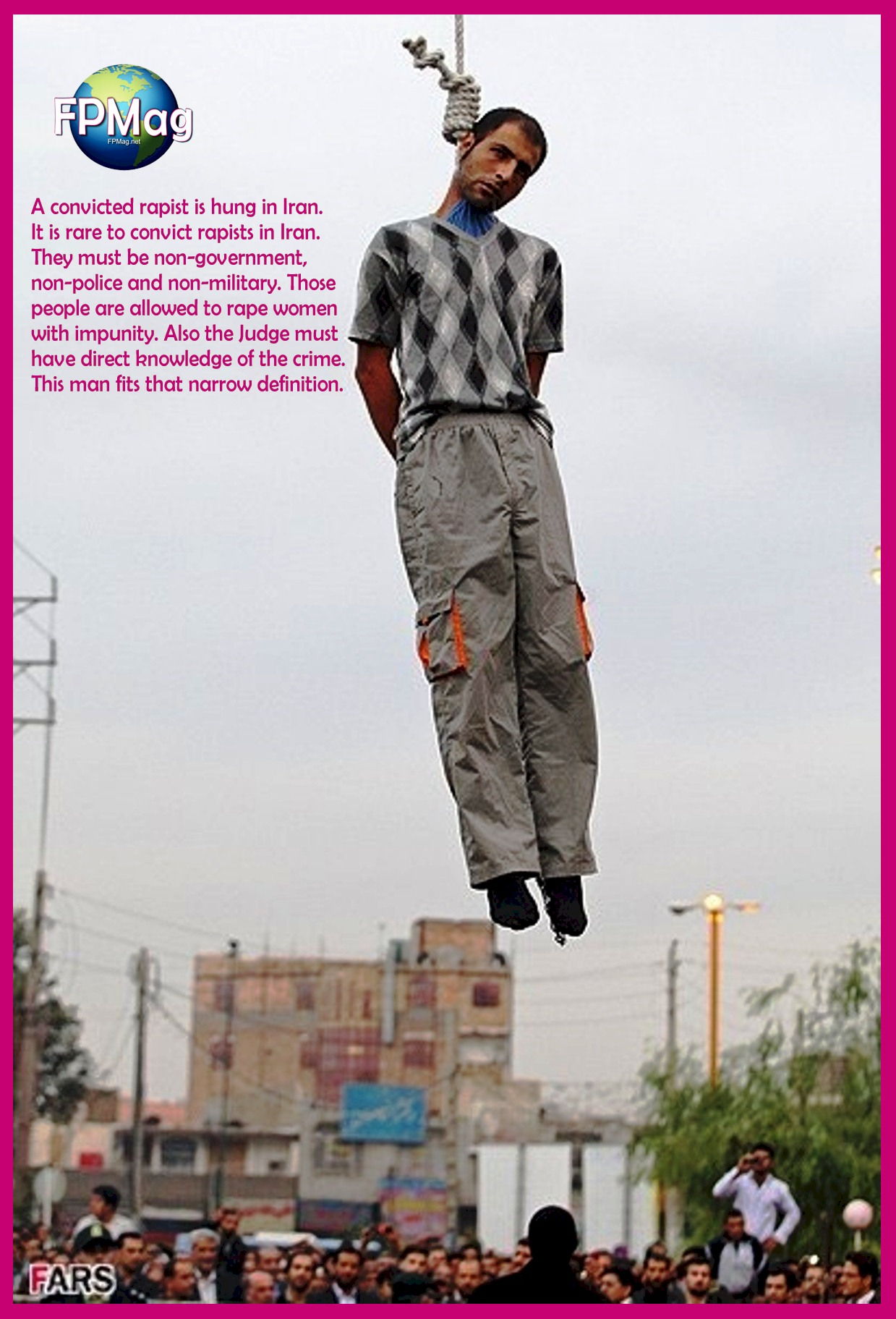 The Photo and its story. A convicted rapist is hung in Iran. It is rare to convict rapists in Iran. They must be non-government, non-police and non-military. Those people are allowed to rape women with impunity. Also the Judge must have direct knowledge of the crime. This man fits that narrow definition.

Notwithstanding the above, one of the positive things about Iran is that you always know what your rights are. The answer is, you don’t have any fundamental rights. You have no basic rights unless you are a law-abiding Muslim man and then you have a few basic rights, like the right to vote for the President who isn’t a president because the Supreme Leader of Every Thing is actually the real boss, not just of the country but technically, of the world because he is a religious supreme being. Men also have the right to marry their stepdaughter once she has reached the official age of 13. It’s worth mentioning but not the exclusive oddity.

Women who actually find work, (half of eligible female workers do not) no matter how high their education may be, are often paid one third of the minimum wage for men. That’s a rule of thumb–an unwritten law.

There are no women in Rouhani’s Cabinet. Rape in Iran is OK if the rapist is a person in authority. If not, the death penalty applies. Non-approved clothing worn by women might result in a fine, a beating, acid attacks, imprisonment or rape by an authorized male which includes police, politicians and the military.

Apart from its government, Iran and its people are beautiful.

The Iranian people, however are in desperate need of rescue, mental health care, debriefing and deprogramming. But that’s their choice. Who is offering help? That’s the problem. Nobody.