The steepest death curves category of 7 nations is led by the United States, by far the worst in total numbers of COVID-19 deaths at 99,097 at 19 May 2020. There is no acceptable explanation for this. The Secretary of Health and Human services has claimed this week that Americans are the most unhealthy in the world with a large percentage suffering from obesity, diabetes and hypertensive heart disease. He seemed to be saying to CNN’s Jake Tapper, a well known Washington DC investigative journalist, that the responsibility for the massive number of US COVID-19 deaths lies with the American people.

By comparison to other nations with similar health demographics, including Italy and other nations where the average age is higher, those nations did not fail to protect their citizens as miserably as did the United States.

“A vulnerable person, someone who is obese, suffering diabetes or high blood pressure must be protected in the same manner as an infant or a centenarian,” said Dr. Anderson of The RINJ Foundation. “They are isolated from potentially infected people and supported by their government, families and communities until the risk has been removed or a vaccine or other remedy is available.”

There is no point in pulling punches. This is an unmitigated human rights disaster and an unquestionable failure of government leadership to the point of a crime against humanity by the Donald Trump administration.

When asked for a comment, a leading global human rights group spokesperson said, “There’s little point in digging into the blame game or the wild diversions of the Trump administration but more to the point the numbers make the case that Trump and his henchmen need to be charged, convicted and jailed for their crimes against the American people and against all of humanity. This is the worst case of ‘zero-empathy’ leadership second only to the Philippines where people are being gunned down in the streets for criticising the government or not wearing a mask.”

These USA numbers include three states where the government has fudged the numbers significantly and hence the computer scientists have requested and received regional health unit reports direct from medical health care workers.

by Al Manzer and Melissa Hemingway

The countries with the steepest death curves are led by the United States. Following the United States’ with high mortality, poor pandemic mitigation is Brazil, Canada, Mexico, India, Peru and Russia in that order. 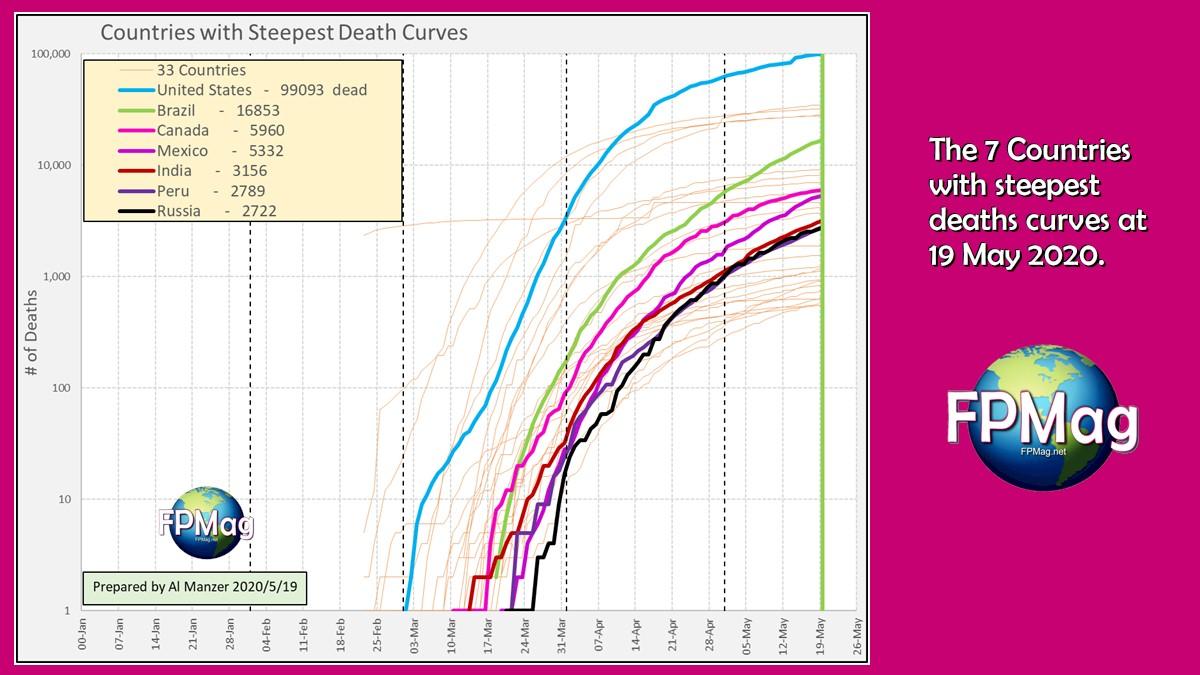 The difference between actual numbers and those offered by political entities ranges from two to three percent of the American total number of deaths. That is a comparison of data known and proven to have an error factor in the output of the US-Government funded and Trump-Administration-biased Johns Hopkins University data. That doesn’t say the errors of JHU reports are deliberate but that the American government data is accepted without question where questions should be asked.

That is also not to suggest only America fudges the numbers. Iran, China, Russia, Britain, and some African nations and Island nations have been questioned by researchers and it is clear that some mistakes were made but always corrected when something was questioned. It is also clear that death rates against total reported cases are barely useful.

According to experts, the inaccuracies of American death rate data range across all US States. This conclusion is based on total daily deaths when the period January 1 to April 30 is compared to the same period of non-public data in 2018 and 2019. The three worst States where data seems to be intended to deceive have been collected from alternative medical and mortuary/pathology/coroner sources.

“Johns Hopkins University data about the United States COVID-19 pandemic management is not accurate nor has it ever been anything but understated,” notes computer scientist Fred Harris who leads the multi-disciplined team compiling five times daily data for /COVID-19/ updates.

According to Harris and others, they first suspected issues when Washington State in January appeared to have a conflict between what the State was discussing internally and what the US Federal government was releasing. The discrepancies grew from there. Also there was a significant American testing regime failure from the outset of the outbreak and researchers began then to seek alternative data. “If the CDC had not failed its earlier testing project, we might not have triggered an alternative set of methods for data collection,” is how Harris describes the path taken.

American scientific researchers imply that all the numbers are significantly higher.

In this video above you will hear “California researchers in a study conducted by the University of Southern California and the Los Angeles Department of Public Health concluded that: “between 2.8% and 4.6% of the adult population in Los Angeles County has an antibody to the virus. This translates to between 221,000 and 442,000 adults — an estimate that is 28 to 55 times higher than the roughly 8,000 confirmed cases that the county had in early April, when the study was conducted.”

Brazil is still in a steep vertical climb and appears statistically to have lost control. Canada is getting it under control. Mexico, Peru and Russia are in grave difficulty and could use some help from friends.

33 Countries with cumulative deaths greater than 500 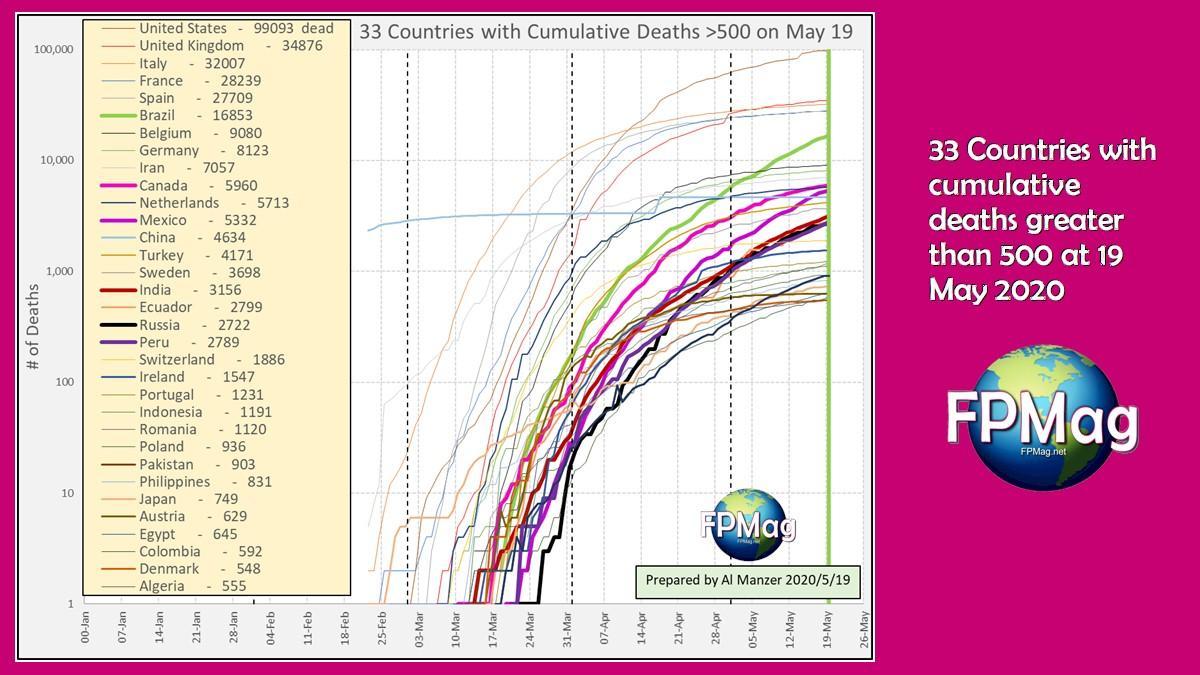 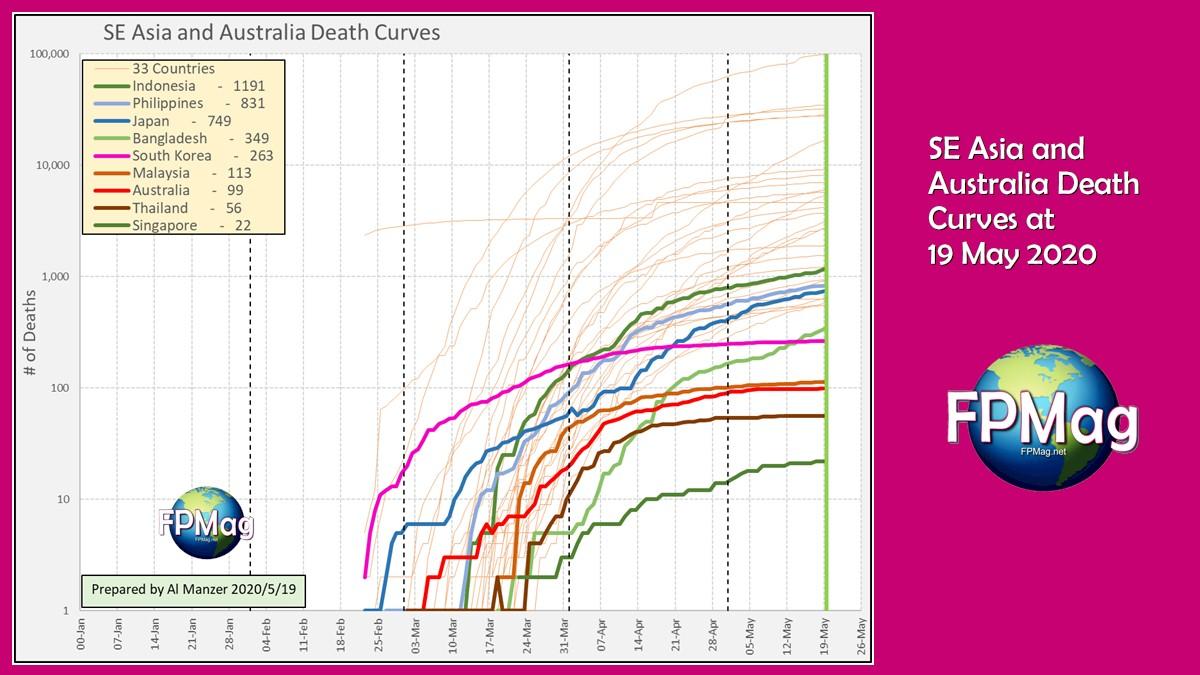 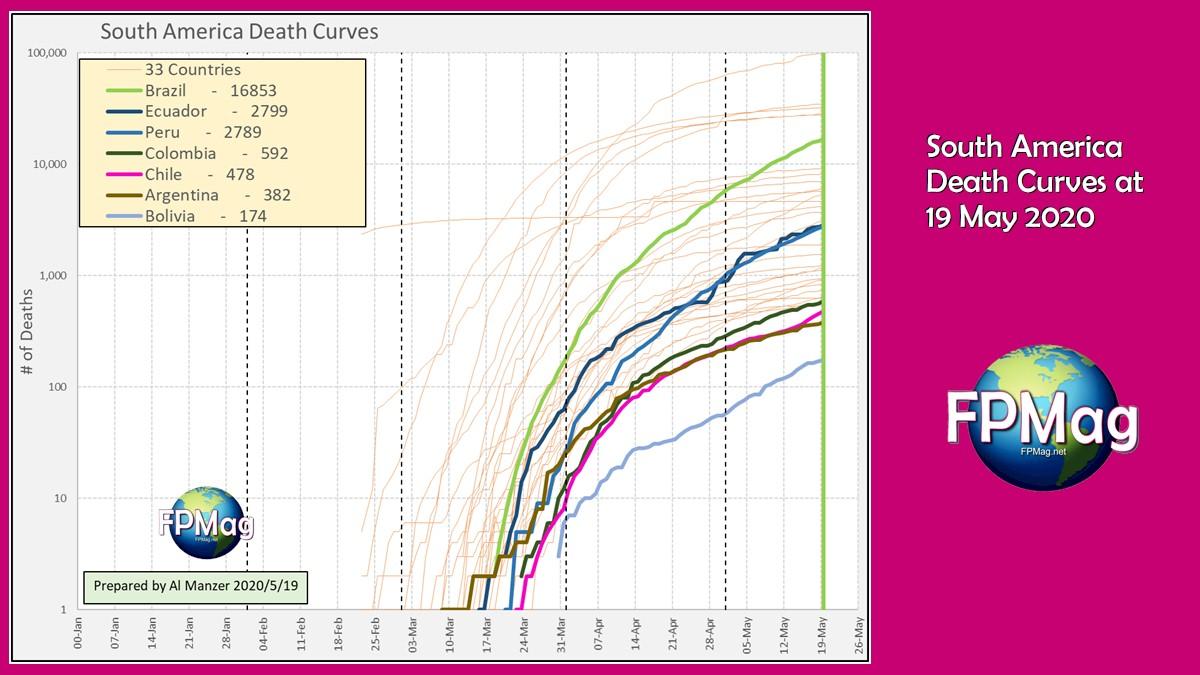 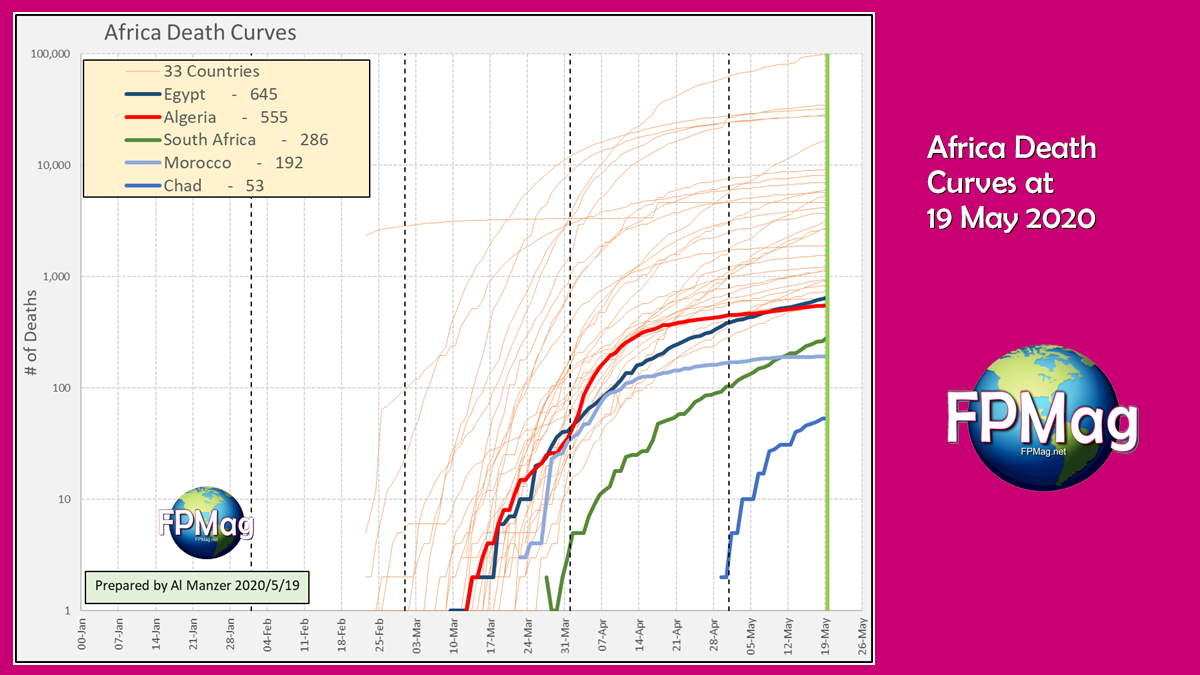 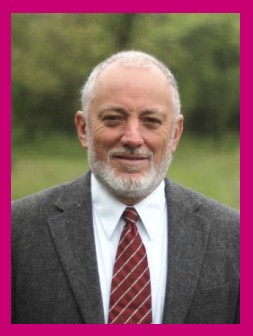