All being notified together 22/01/2020, most countries today have three or four deaths per million population while America has far more than 100 times that.

As former Secretary of State General Colin Powell says, Trump has “done things that have offended just about everybody in the world.”

America’s mass burials of the COVID-19 black American dead are heart-wrenching and reprehensible. So many thousands of preventable deaths are a crime against humanity especially since Trump knows COVID-19 kills more Black Americans than anyone, and he in particular, Trump, is a White Supremacist which makes his killings of Americans seem deliberate.

Despite being obvious, racism escapes Trump’s White Supremacist Twitter fan-base who inherently think hating non-whites is normal. Many people were raised that way. For Twitter, it is starting to sink in. For Facebook, Mark Zuckerberg relishes the idea of racist slams and fights and has since been branded as a racist by civil rights leaders  who have met with him to discuss the issues.

The racial battles on Facebook drum up huge audience reactions just as Facebook’s pro-rape pages did in its earlier days. Facebook was once the center point cataloger for child sex traders. The higher numbers generate $billions in advertising revenues. Money is everything. Human rights are nothing to Facebook and other social media corporations. 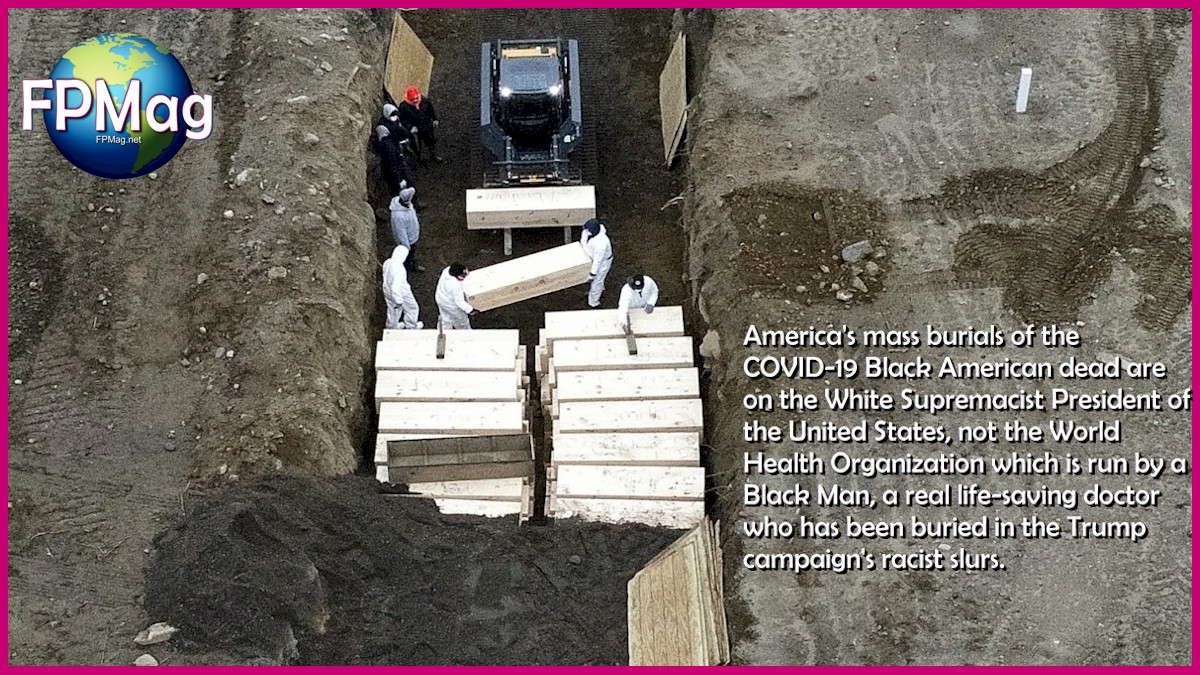 America’s mass burials of the COVID-19 Black American Dead are on the White Supremacist President of the United States, not the World Health Organization which is run by a Black Man, a real life-saving doctor who has been buried in the Trump campaign’s racist slurs. Photo Credit: Video Capture from YouTube — Photo Art/Cropping/Enhancement: Rosa Yamamoto FPMag

Donald Trump is a mass-murderer. The world knows that to be true, and capable of proof. The world is done with Trump.

The mass burials of the COVID-19 Black Americans in cheap pine boxes are on the White Supremacist President of the United States, not the World Health Organization which is run by an Ethiopian black man, a real life-saving care-giver who has been buried in the Trump election campaign’s racist slurs.

If Trump had taken Dr. Tedros (Executive Director of WHO) advice in January, and moved quickly when he was told to do so, only 240 Americans would be dead now as a result of the COVID-19 disease. But the US President scoffed and said it was a hoax that hundreds of Chinese had died from the disease caused by the novel coronavirus.

The United States attacks against the World Health Organization’s Dr. Tedros are reprehensible, racist and a failed method of distracting from the Donald Trump Administration’s incomprehensible incompetence and its vast slaughter of American non-white people without a care.

“They are for sure not Trump supporters,” shrugs Bill, who carried an assault rifle to a protest in Governor Gretchen Whitmer’s office in Michigan after hearing Trump’s “call to arms”.

One of the ironic aspects of the whole affair is that the allegations against WHO by (Dr?) Trump are as clownish as his utraviolet-yourself suck-on-a-bleach-bottle doctor-role. (Don’t.)

Doctors at WHO handle USA attacks like a doctor deals with a mental case. “You don’t try to argue with a drunk or a mental health rant, you listen and if something needs fixing, fix it and move on,” says Dr. Anderson.

The Trump Administration screwed up so badly it now must tell whopping lies about the numbers of deaths, even though what they can’t hide is a monstrous crime against humanity. Monstrous. And all they had to do was follow Dr. Michael Ryan’s Instructions back in January.

Before Black Lives Mattered, Trump relied on his Campaign team  to go After a “Black N*****” , WHO Dr. Tedros. But Tedros is not the head of the Executive Branch of USA Government

The racist attacks started almost two months ago and it was a concerted effort, a campaign on social media, to blame the Ethiopian Administrator of  WHO for the colossal pandemic-management failure of the Trump administration. (Also “slant-eyed gooks” and other insults were flung at the Chinese by the Trump Trolls.)

The WHO Constitution, which establishes the agency’s governing structure and principles, states its main objective as “the attainment by all peoples of the highest possible level of health”.

WHO does its work as an advisory agency of the United Nations and is not responsible for the Health Department of the United States.

Ironically it is not Dr. Tedros who is the executive director of the World Health Organization’s Health Emergencies Program at the table.

The Doctor in charge of the pandemic is Dr. Michael Ryan, an Irishman. Dr. Ryan is the man responsible for the World Health Organization’s response to the COIVD-19 response.

Trump’s gaff is that he exploited the fact that the non-medical doctor who is the administrative head of the WHO is black for the attacks of his White Supremacist Social Media hit teams.

Trump played his racist base to the hilt.

But Tedros is not the Doctor in charge. The medical doctor in charge is in fact a white conservative Irishman who is exclusively in charge of the Health Emergencies Program for the United Nations. Trump picked the black guy to attack, not the man in charge of the pandemic response because his base would not bite the bait.

Professor Tedros makes it clear, Dr. Ryan is in charge.

Trump is not only a murdering racist, but he is a stupid liar, noted former Secretary of State General Colin Powell who also said he uses those words reluctantly since he is speaking about a US President.

The Washington Post has allegedly tracked over 20,000 Trump lies.  Irrevocably Trump is a liar.

On 22 January
Every Country in the World had the same information on the coronavirus outbreak. Watch.

“Anyone who has ever worked at an Ebola clinic would shudder. Thank God there are brave people like Dr. Tedros who will do this work nobody else wants to do,” says an Ethiopian Doctor who works with The RINJ Foundation as a Southern African Region director.

“We know,” said Dr. Anderson, “that both the WHO and China did the best humanly possible mitigation effort and warnings. We know exactly when in January China submitted the timely genome for the novel coronavirus to three data banks in the world including the American CDC. We also know now that Europe and America already had COVID-19 cases last year that they had not identified. We now know China was first in identifying the disease but not the first to be infected.”

“Countries like South Korea, Singapore, United Arab Emirates, New Zealand, Iceland, Taiwan,” continued Dr. Anderson, “all were warned at the same time and acted quickly to prevent the spread of the disease in their countries. Those countries in fact most countries have three or four deaths per million  population while America has 100 times that.”

Note: The World Health Organization has now admitted it has been wrong on the topic of masks. It is still a mystery how WHO got this wrong but it certainly has nothing to do with race as Trump implies. An investigation is under way. The novel coronavirus is a respiratory disease and all races of humans have an identically functioning respiratory system no matter the race.

FPMag staffers have been warning readers since December 2019 that the coronavirus is a respiratory illness requiring maximum protection of the respiratory system. Wear an N95 Mask or at least a mask of three layers of protection capable of blocking.3 micron toxic particles in EITHER DIRECTION

The Corona Virus Is Raging across the world.

2. Wear A Mask when you go for groceries, pharmacy, doctor’s appointments, and children’s vaccinations.

3. Stay Safe at Home as much as possible.