Not a soldier. Uniformed American bearing arms against countrymen is no soldier.

Forward by Melissa Hemingway:
As all stories do, the cover will close on this one.

During an editorial meeting, FPMag staffers waited for the editor who was having some coffee with some soldiers. We waited and deliberated on what we could say and do that would help mend the pain not just in America but all around the world.

FPMag  started an essay contest. We wanted to do more. The streets are burning for George Floyd in Toronto, Montreal, Paris and in London as well as in 30 or more American cities. We are all waking up to racism. Hopefully George is going to change the world because the week George died, the whole world cried.

“A cold feeling comes into my spine watching those men kill George Floyd in a mutually consented act of murder among white cops that would only end George’s life. That revulsion is hard to describe. It’s foreign to normal people but to someone like Donald Trump and Mike Pompeo, plus most of Trump’s side kicks, it turns their cranks. They like it. The excitement,” said Rosa Yamamoto,our tiny little perfect art director.

“For unfeeling people with egos swollen by power,” notes nurse Amanda, “it’s all part of a surreal script. They make stuff up and play out roles they invent. Don’t get caught up in that. Oust politicians and cops like that. Did you know psychopaths are drawn to those two careers? Don’t give them those jobs—something I learned in my medical courses, dealing with trauma caused by those people. Wars. They excite other psychopaths and they then become active too. Stop electing people like that or putting them into positions of power and control,” Amanda added.

Sharon Santiago shook her head sadly. “Soldiers smashed their way through a park to a church so Trump could take promo pictures and introduce his new character, ‘your law and order president'”, she said as she had that look on her face that shouts, you don’t want to mess with this woman.

Well, those were the painful thoughts that spilled as the editorial staff tried to grip our own feelings. George is a sweet man who is easy to love. Everyone loves George. Please take care of his family, America.

Our editor came back from learning what the soldiers had to say. His face was grim 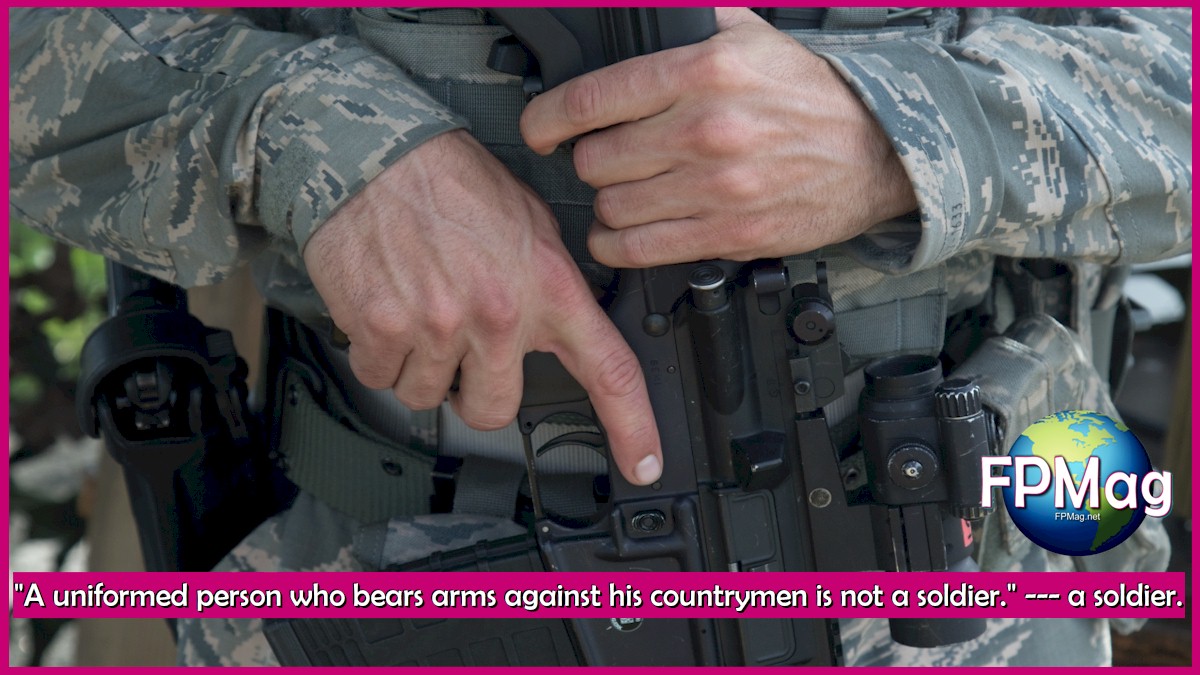 “A uniformed person who bears arms against his countrymen is not a soldier.” — a soldier. Photo by Spc. Samuel Keenan Art/Cropping/Enhancement: Rosa Yamamoto FPMag

A soldier told us he would like to punch Defense Secretary Mark Esper in the face because of the crimes committed in Lafayette Park and the threat of sending soldiers against countrymen. “You don’t do that. I didn’t sign up to fight my own people.”

Update Note: Since publication of this article, to his credit, Mr. Mark Esper has renounced the conduct that offended soldiers FPMag quoted. Mr. Esper is currently a politician in the service of the American people under the Trump Administration and is fair game for any and all criticism or praise that is due. – Editor

There will be no soldiers’ names mentioned here and the photographs are of Guards thousands of miles from the story.

“Send the police to stop looters. Why the hell do you need a tank for that,” asked one gunner.

First Trump angers African Americans for a week and gets them into the streets amidst a deadly pandemic.

Real looter-professionals, (yes that is criminal career) roam Earth looking for chances to loot at protests, so they come out too.

But Trump may not really want soldiers to kill blacks, he just wants to have people who like the idea (white supremacists) vote for him in the November election.

It’s a TV script. This script is a very dangerous chapter in Trump’s bizarre exacerbated psychosis because the wackos don’t know it is surreal, just a trick to drag out the ultra conservatives who hate non-whites. It’s play acting that it is authenticating and normalizing dangerous malignancies in America.

Trump doesn’t see this as real but a ploy to use at your emotional expense. So stay home & don’t get killed by violence or get sick from COVID-19.

Somehow Trump got the idea that sending out the US Army to slaughter the non-white Americans who are allegedly storming the streets and looting. (It’s only Trump saying protesters are “looting” and he wants to start “shooting”.)

Evidence indicates that a black man speaking out is in big trouble. Meanwhile the number of non-whites doing amazing duty in the American forces is very high. Watch the video. Is this what Trump wants the US Army doing.

Sending soldiers to fight their countrymen is a huge violation of the professional soldiers’ code of conduct.

The Posse Comitatus Act prohibits the use of active duty personnel against the American public, but there is more than that.

A soldier told FPMag, “A uniformed person who bears arms against his countrymen is not a soldier.”

Think of Trump as a cartoon character but don’t let him have the real levers of power. The joke is over. 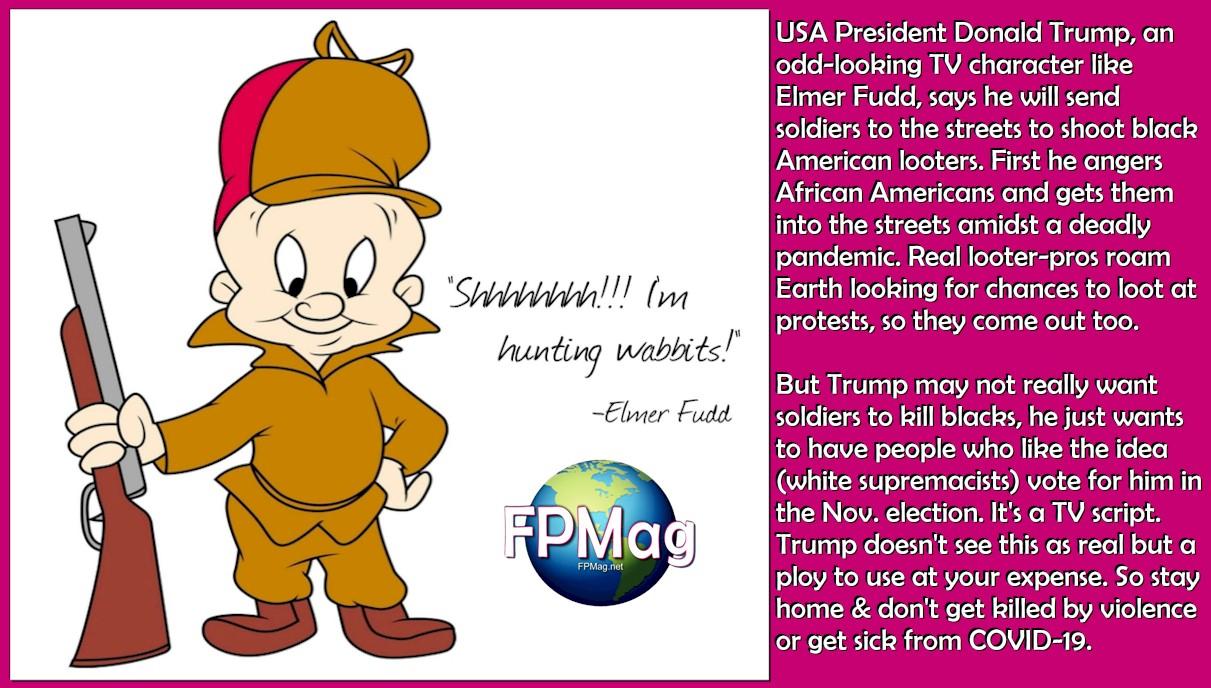 USA President Donald Trump, an odd-looking TV character like Elmer Fudd, says he will send soldiers to the streets to shoot black American looters. First he angers African Americans and gets them into the streets amidst a deadly pandemic. Real looter-pros roam Earth looking for chances to loot at protests, so they come out too. But Trump may not really want soldiers to kill blacks, he just wants to have people who like the idea (white supremacists) vote for him in the Nov. election. It’s a TV script. Trump doesn’t see this as real but a ploy to use at your expense. So stay home & don’t get killed by violence or get sick from COVID-19. (Looney Tunes Public Domain) Photo Art/Cropping/Enhancement: Rosa Yamamoto FPMag

The code of a soldier is to defend countrymen. Firing upon your own people is called ‘friendly fire’ and it is considered an egregious error usually an accidental attack by a military force on friendly or neutral troops while attempting to attack the enemy. Examples include misidentifying the target as hostile in a close combat zone. This also happens in urban warfare and to avoid this problems, electronic IFF (Identification Friend or Foe) is used in conjunction with satellites and other technology systems. The point is that enormous efforts are made by combat arms soldiers to prevent harm to their countrymen. Nobody signs up to the American Army to kill Americans.

“‘Old resentment and fresh fears divide America,’ says VP Biden,  but one would think that has not grown to the point of turning the US military against the American people,” asked a Sgt. rhetorically.

Trump’s TV Character is playing the role of,  “The Law and Order President“, a heavy handed character who orders helicopters to swoop low and knock people down with the rotor downwash. He has paramilitary troops smash Australian journalists in the head with shields to make the “tough-guy” point.

“Wow. Trump has created a racist battlefield in the midst of a pandemic ruled by a ferocious deadly cornavirus that kills mostly non-whites. But it will kill soldiers too, and infect more of the public at large as soldiers infect their families,” speculates one soldier.

“This guy Trump doesn’t give a **** about anyone, does he?” a specialist asked.

A uniformed person who bears arms against his countrymen is not a soldier.” — a soldier.

“There cannot be a CDS in charge and looking out for us if this kind of thing is going on. Just a bunch of politicians in uniforms.” The two soldiers turned and walked away. 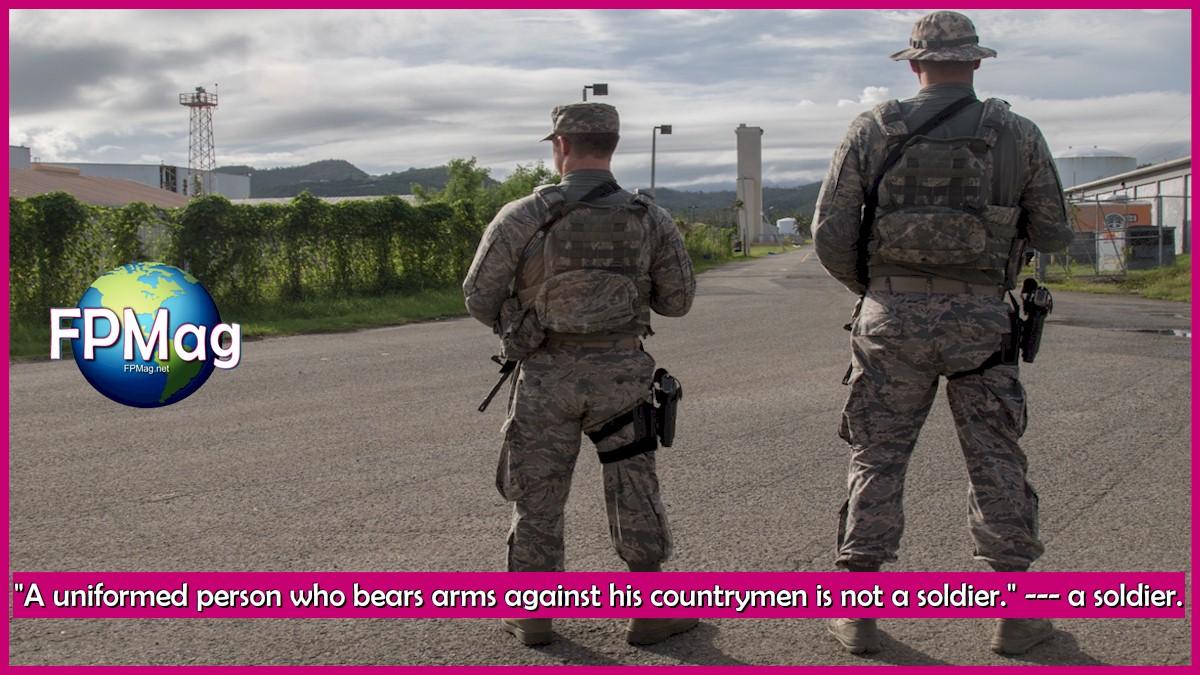 “Farewell, George from some soldiers who feel they have been disrespected by the US President but your countrymen will not do that to you. Rest in peace, brother. We be paying into a GoFundeMe for your Family. “ 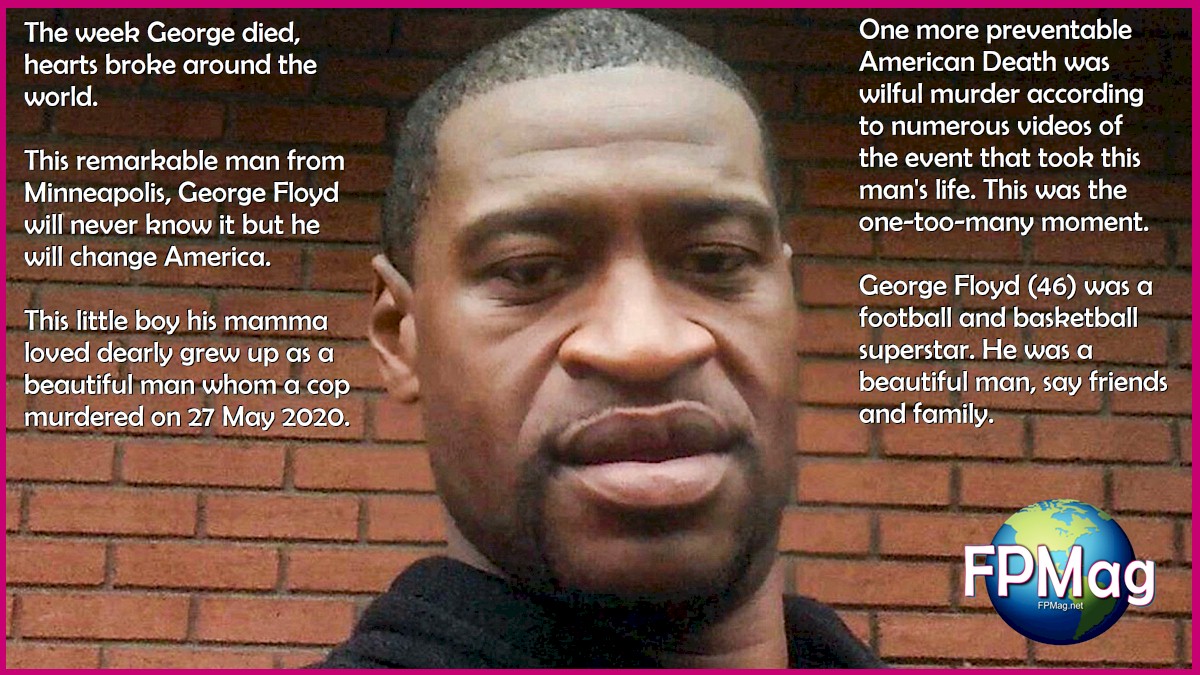