“The latest brouhaha is over Trump Twitter attacks on American Human Rights Defender, Martin Gugino, who on 4 June 2020 was seen in a video that went viral around the world as he was being beaten down by Buffalo police and left laying on the concrete bleeding from the ears and out cold as cops marched over him”, says Monique Deslauriers, a Nurses Without Borders member from Calais, Maine who interviewed a nursing colleague, friend of  Mr. Gugino’s late sister.

“Mr. Guigino is now undergoing therapy for a brain injury,” she added. He has been hospitalized since 4 June.

American authoritarian President Donald Trump who has been fighting against the Black Lives Matter movement with threats of military crackdowns against American cities has apparently taken the side of police in Buffalo and has tried to marginalize Mr. Martin Gugino as an antifascist demonstrator.

But according to witnesses, including Martin Gugino’s personal friend, Keith Giles of the Buffalo area if New York State, the truth is quite the opposite. Mr. Gugino is by all accounts a bona fide human rights defender who brings food to the hungry and fights for the rights of the homeless.

“He was demonstrating on 4 June with the Black Lives Matter movement in Buffalo against the murder of the late George Floyd when he was struck down.” 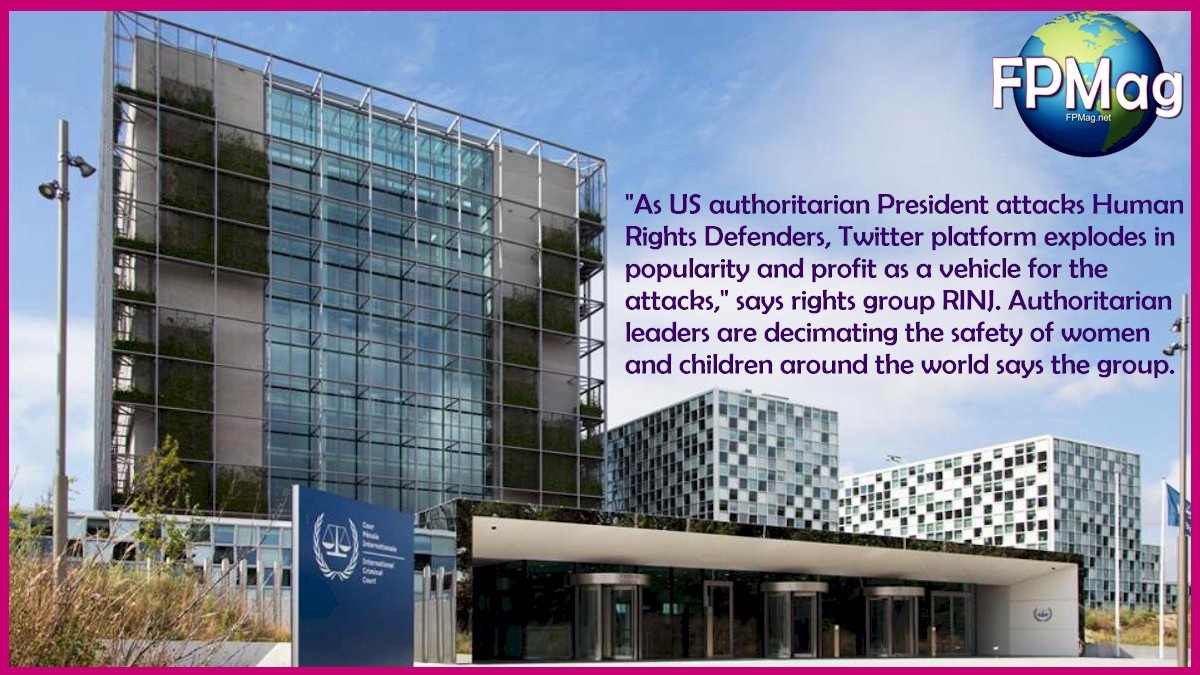 White House announced that US President Donald Trump had issued an executive order authorizing sanctions against ICC officials who are investigating potential war crimes committed by US soldiers in Afghanistan. “As US authoritarian President attacks Human Rights Defenders, Twitter platform explodes in popularity and profit as a vehicle for the attacks,” says rights group RINJ. Authoritarian leaders are decimating the safety of women and children around the world says the group.  Photo Credit: International Criminal Court. Photo Art/Cropping/Enhancement: Rosa Yamamoto FPMag

Mr. Martin Gugino (75) was seen in a video and on the front pages of American newspapers being struck by at least one male police officer in heavy combat gear or riot gear pushing the man to the ground where he then lay with blood coming from his ear.

Yesterday  Mr. Gugino’s lawyer, Ms. Kelly Zarcone, reportedly said that “As heartbreaking as it is, his brain is injured and he is well aware of that now.” 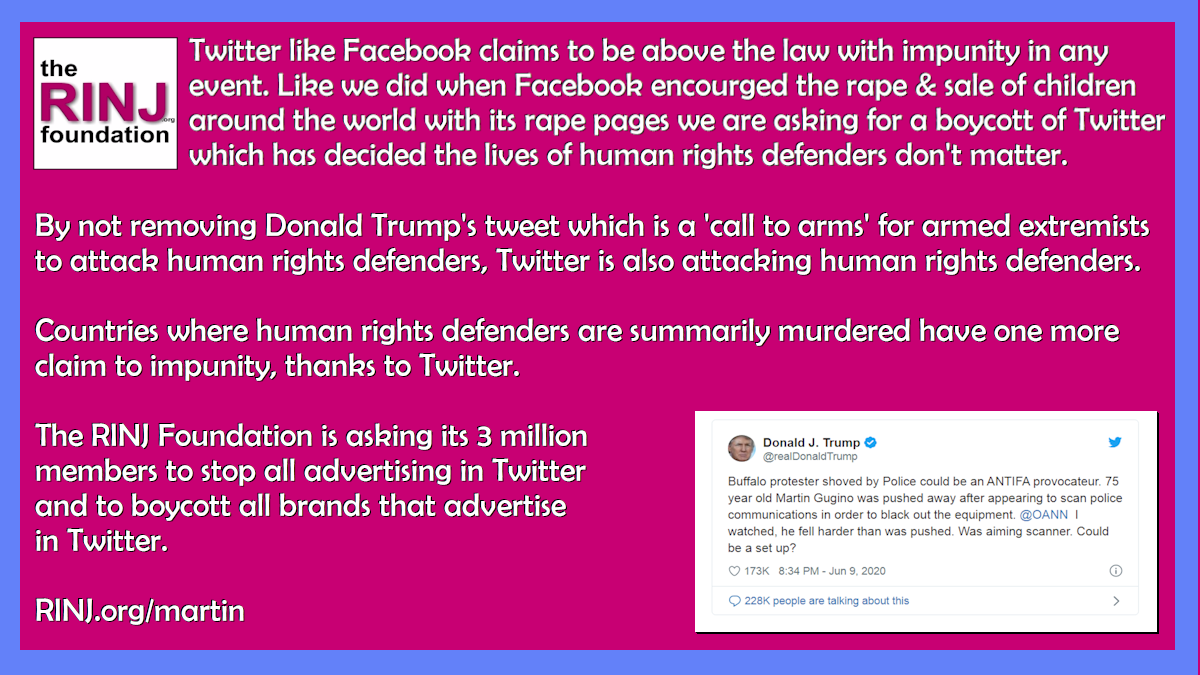 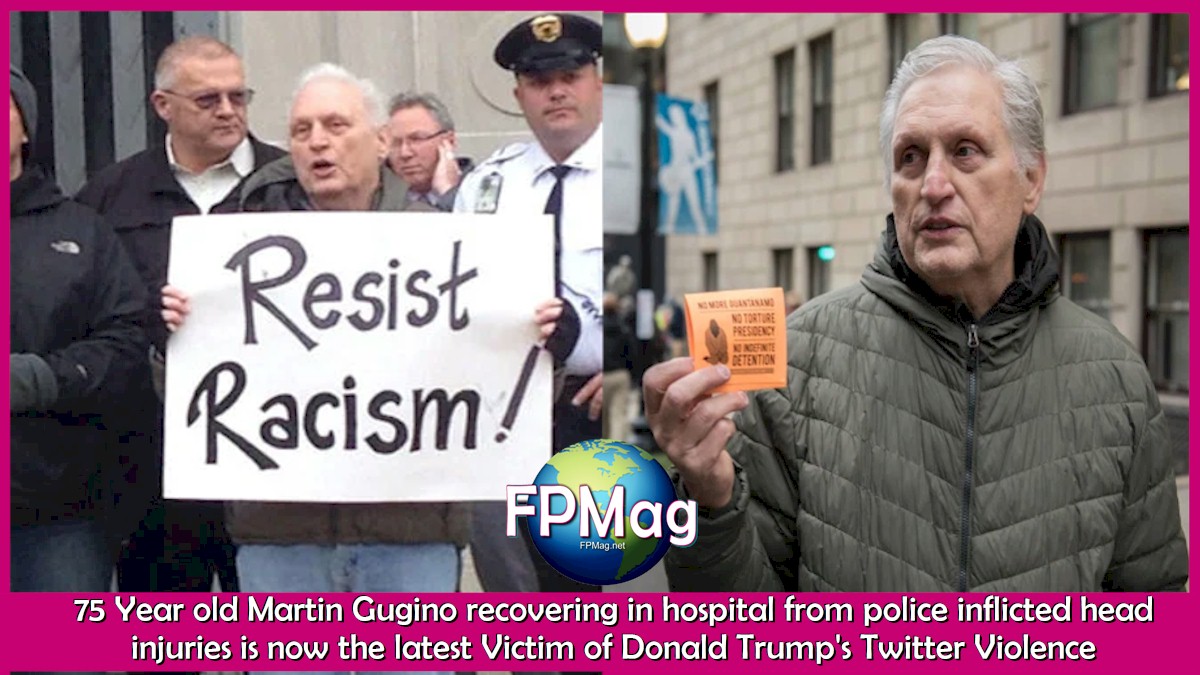 Trump attack on American Human Rights Defenders is part of his global campaign against human rights.

Donald Trump, in trying to distract from his colossal crime against humanity in the United States has invoked the wrath of the world

“The International Criminal Court expresses profound regret at the announcement of further threats and coercive actions, including financial measures, against the Court and its officials, made earlier today by the Government of the United States”, the ICC said in a statement released  also in  Thursday.

The White House
Office of the Press Secretary
FOR IMMEDIATE RELEASE
June 11, 2020

Sec. 2. I hereby determine that the making of donations of the types of articles specified in section 203(b)(2) of IEEPA (50 U.S.C. 1702(b)(2)) by, to, or for the benefit of any person whose property and interests in property are blocked pursuant to section 1(a) of this order would seriously impair my ability to deal with the national emergency declared in this order, and I hereby prohibit such donations as provided by section 1(a) of this order.

Sec. 6. Nothing in this order shall prohibit transactions for the conduct of the official business of the Federal Government by employees, grantees, or contractors thereof.

Sec. 8. For those persons whose property and interests in property are blocked pursuant to this order who might have a constitutional presence in the United States, I find that because of the ability to transfer funds or other assets instantaneously, prior notice to such persons of measures to be taken pursuant to section 1 of this order would render those measures ineffectual. I therefore determine that for these measures to be effective in addressing the national emergency declared in this order, there need be no prior notice of a listing or determination made pursuant to section 1 of this order.

Sec. 10. The Secretary of the Treasury, in consultation with the Secretary of State, is hereby authorized to submit recurring and final reports to the Congress on the national emergency declared in this order, consistent with section 401(c) of the NEA (50 U.S.C. 1641(c)) and section 204(c) of IEEPA (50 U.S.C. 1703(c)).

Sec. 11. (a) Nothing in this order shall be construed to impair or otherwise affect:
(i) the authority granted by law to an executive department or agency, or the head thereof; or
(ii) the functions of the Director of the Office of Management and Budget relating to budgetary, administrative, or legislative proposals.
(b) This order shall be implemented consistent with applicable law and subject to the availability of appropriations.
(c) This order is not intended to, and does not, create any right or benefit, substantive or procedural, enforceable at law or in equity by any party against the United States, its departments, agencies, or entities, its officers, employees, or agents, or any other person.

The International Criminal Court (“ICC” or “the Court”) expresses profound regret at the announcement of further threats and coercive actions, including financial measures, against the Court and its officials, made earlier today by the Government of the United States.

The ICC stands firmly by its staff and officials and remains unwavering in its commitment to discharging, independently and impartially, the mandate bestowed upon it by the Rome Statute and the States that are party to it.

These are the latest in a series of unprecedented attacks on the ICC, an independent international judicial institution, as well as on the Rome Statute system of international criminal justice, which reflects the commitment and cooperation of the ICC’s 123 States Parties, representing all regions of the world.

An attack on the ICC also represents an attack against the interests of victims of atrocity crimes, for many of whom the Court represents the last hope for justice.

As it continues to meet its mandated responsibilities, the Court relies on the staunch support and cooperation of its States Parties. The Court wishes to recall, in this context, yesterday’s joint statement from the ten ICC States Parties members of the UN Security Council, reconfirming their “unwavering support for the Court as an independent and impartial judicial institution,” as well as the press statement issued earlier today by the President of the Assembly of States Parties.