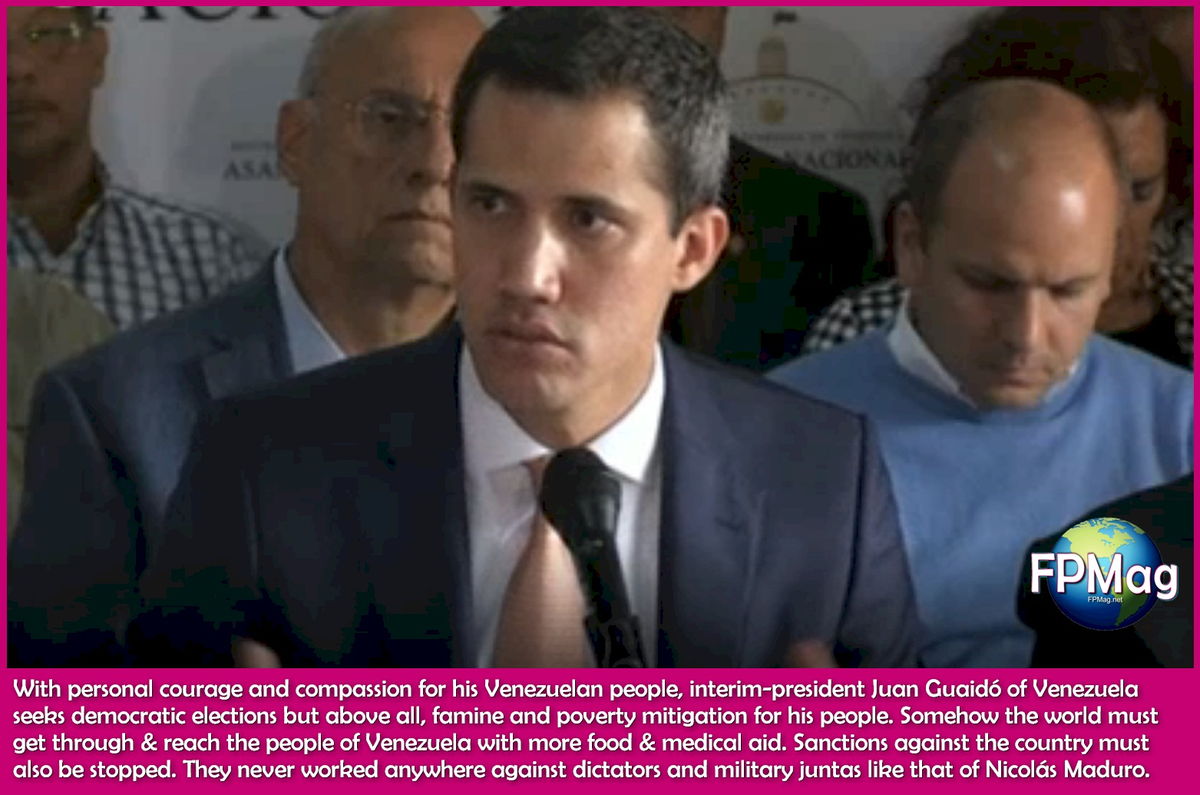 With personal courage and compassion for his Venezuelan people, interim-president Juan Guaidó of Venezuela seeks democratic elections but above all, famine and poverty mitigation for his people. Somehow the world must get through & reach the people of Venezuela with more food & medical aid. Sanctions against the country must also be stopped. They never worked anywhere against dictators and military juntas like that of Nicolás Maduro. Photo Credit: Caracas TV Video Capture
Photo Art: Rosa Yamamoto FPMag

“Nicolás Maduro is about to be assassinated,” say the locals in Caracas.  If the plotters are successful, there may be greater chaos than what is present.

Some plots, the rumours say, are angry citizens without much likelihood of succeeding and others are said to be serious insiders who squabble about the spoils. A failed conspiracy in April was attributed to squabbling over the spoils by people close to the military junta leader who are likely no better than Maduro.

A few people say they worry about standing too close to Maduro. This is not idle speculation. There are plots to rid the country of Maduro’s  rule of terror and incompetence. The military dictator has lately resorted to new crimes of unlawful detention and torture against the people of Venezuela in order to maintain control. 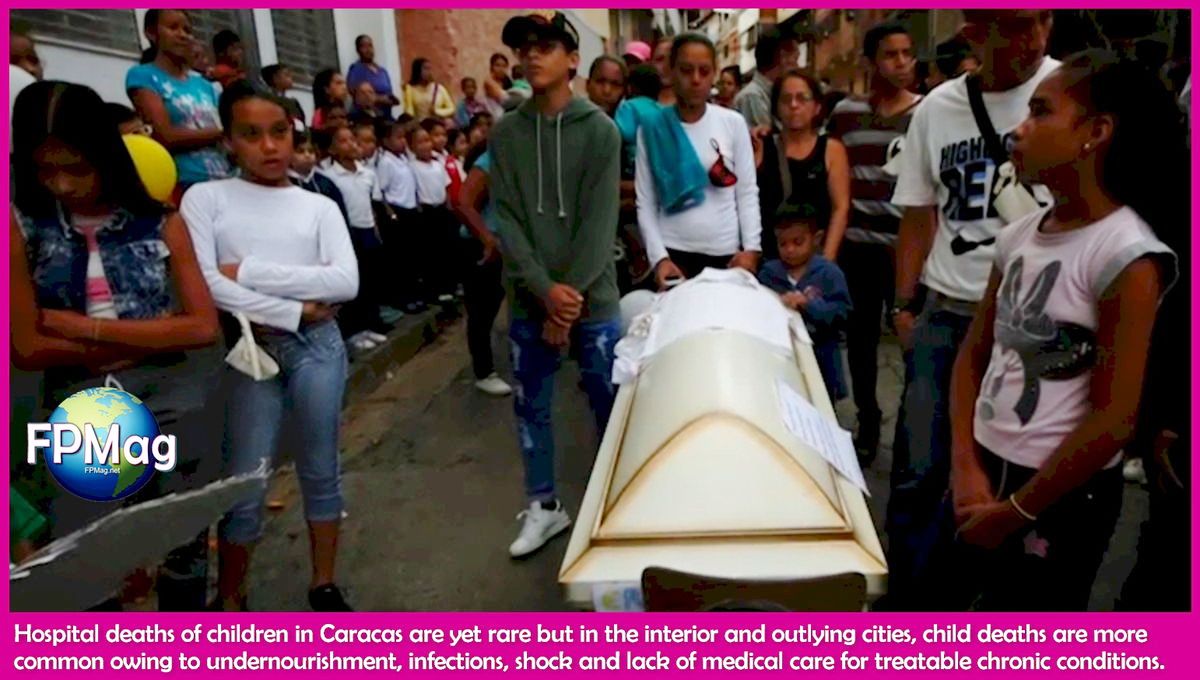 The weakest Venezuelans are not surviving food and medicine shortages in Venezuela.

Notwithstanding the incompetence, brutality and corruption of the Maduro military junta controlling Venezuela, crippling economic sanctions are killing Venezuelans.

Speaking from near Caracas Venezuela, nurse Michele Frances tells FPMag that conditions are worsening in Venezuela as hyper-inflation robs the pockets of ordinary Venezuelans, even those whose employers are still able to pay them.

Explaining the medical crisis in brass tacks detail. It is a fundamental collapse of health care.

Disinfectants of many different types and strengths are used throughout hospitals. One may not use the disinfectant employed for cleaning gastrointestinal endoscope cleaning machines in operating rooms. Their noxious fumes are corrosive and can only be used in mask-only high-ventilation sterilization rooms. Floors in cafeterias are cleaned with different solutions than procedure and operating rooms. All these rules create a requirement for large inventory and budget for disinfectants in every hospital. In the alternative, hospitals face acquired infections that are a major cause of mortality and morbidity.

But increasingly as conditions worsen, hospitals have neither the supplies nor the money to buy them. This is an extremely serious challenge to clinicians and administrators as well as patients. The risk is spreading infections and starting new epidemics. Patients going to a hospital for urgent care might come away worse off than when they entered.

A professional colleague of Nurse Frances is working in a ‘Sisters of the Poor‘ faith-based hospital in northern Venezuela. She reports that deaths from malnutrition have increased and that power blackouts have exceeded what diesel backup generators can handle.

Fuel is at an extraordinary high price and the hospital administrators must purchase medicines first, plus enteral feeding gear; nasogastric sets; combined minerals and vitamins mix; ReSoMal; IV Darrow’s solution; Ringer’s lactate bags (fluid containing *dextrose, calcium, potassium, lactate, sodium, and chloride) for the resuscitation of elderly and very young patients who present with symptoms of undernourishment and dehydration (*5% dextrose additive to Darrow’s and Ringer’s used for malnutrition whereas other electrolytes are used for rehydration and to allow normal muscle contractions and transmission of nerve impulses, sometimes recovering a patient in shock from malnutrition or dehydration which accompanies illness).

These are very basic emergency needs of hospitals and they don’t have them for their patients. That, is a calamity.

It is working out that such inexpensive heavy loads are cheaper, despite enormous risks, to bring into the country, smuggled through Colombia. In the past The RINJ Foundation has shipped powdered forms of these resuscitation items to be combined with water before use.

Their purchase is outrageously expensive in the hyper-inflation of Venezuela and the punishing sanctions that are killing children.

Nurse Frances says a straw poll estimate based on canvassing other hospitals suggests that one third of Venezuelan children are showing early or developed symptoms of undernourishment, or worse.

With personal courage and compassion for his Venezuelan people, interim-president Juan Guaidó of Venezuela seeks democratic elections but above all, famine and poverty mitigation for his people. Somehow the world must get through & reach the people of Venezuela with more food & medical aid. Sanctions against the country must also be stopped. They never worked anywhere against dictators and military juntas like that of Nicolás Maduro.