Several FPMag readers have written to ask about  the current activities of The RINJ Foundation, a women’s civil society group operating around the world and, by the way, the publisher of FPMag. In several instances the writers are former patients in war zones asking about particular persons they have met.

Who are The RINJ Foundation Women?

They are the women who try to remind the world that it requires an unthinkable level of misogyny or just plain evil to start wars wherein only women and children suffer the consequences.
(Remember Sinjar
Remember Gaza
Remember Myanmar
Remember Mosul
Remember Idlib
Remember Sudan
Remember Darfur…) 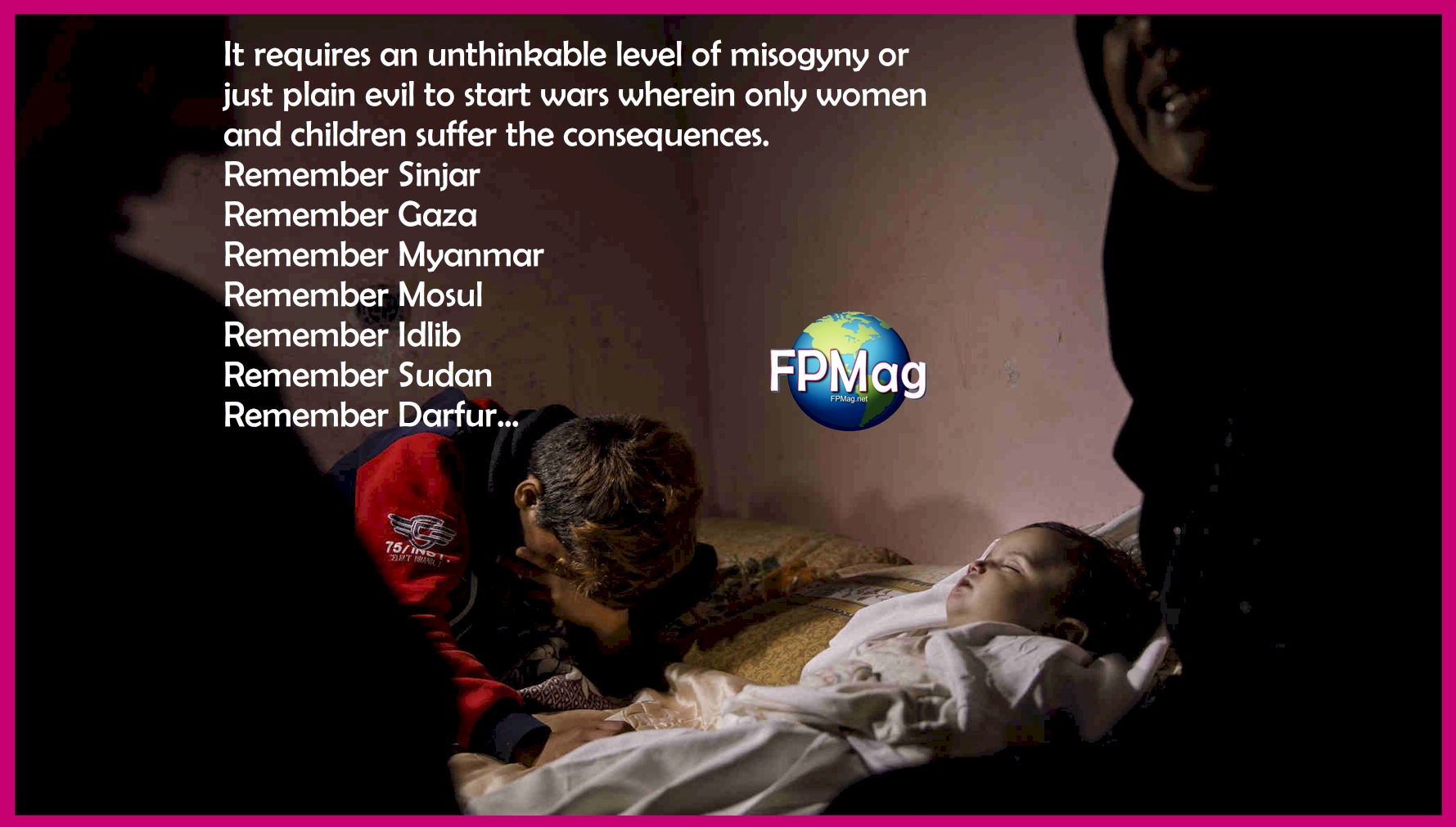 According to Sharon Santiago, a RINJ Foundation Pacific Region manager in South Asia, “the organization does not provide travel and location information for any of its workers but the persons asked about are healthy, happy and send their love”. She had checked each case and responded by email.

Stealth health care in war zones must be emblemized by the doctor-bag and a pair of rugged shoes. Hospital buildings with big cross emblems on the roof are no more than targets being bombed to rubble in Syria by the Russians and the Syrians. _ Dr. Buni, Idlib Syria

“We communicate between people when we are asked but the caregiver for any person approaching the group is the one in front of you,” says Sharon. “The last person you saw may have moved a long distance. But it doesn’t hurt to ask,” she adds.

According to Wikipedia The RINJ Foundation (RINJ) is a Canadian incorporated [1] global not-for-profit health care-related non-governmental organization women’s group listed with the United Nations as an NGO in Special Consultative Status.

When asked about the group’s history, Katie Alsop, a founding director responded abruptly, “We are not an antirape group we are a “Women’s Rights Group” and we fight for the safety of women and children around the world“.

The women’s rights group has discovered that the only way to reach survivors of rape and incest is to provide general health care in otherwise hard-to-reach areas.

“Children and women incest and rape survivors in most parts of the world will never walk into a Rape Clinic that has that as a sign on its door,” says an article on the RINJ web site. 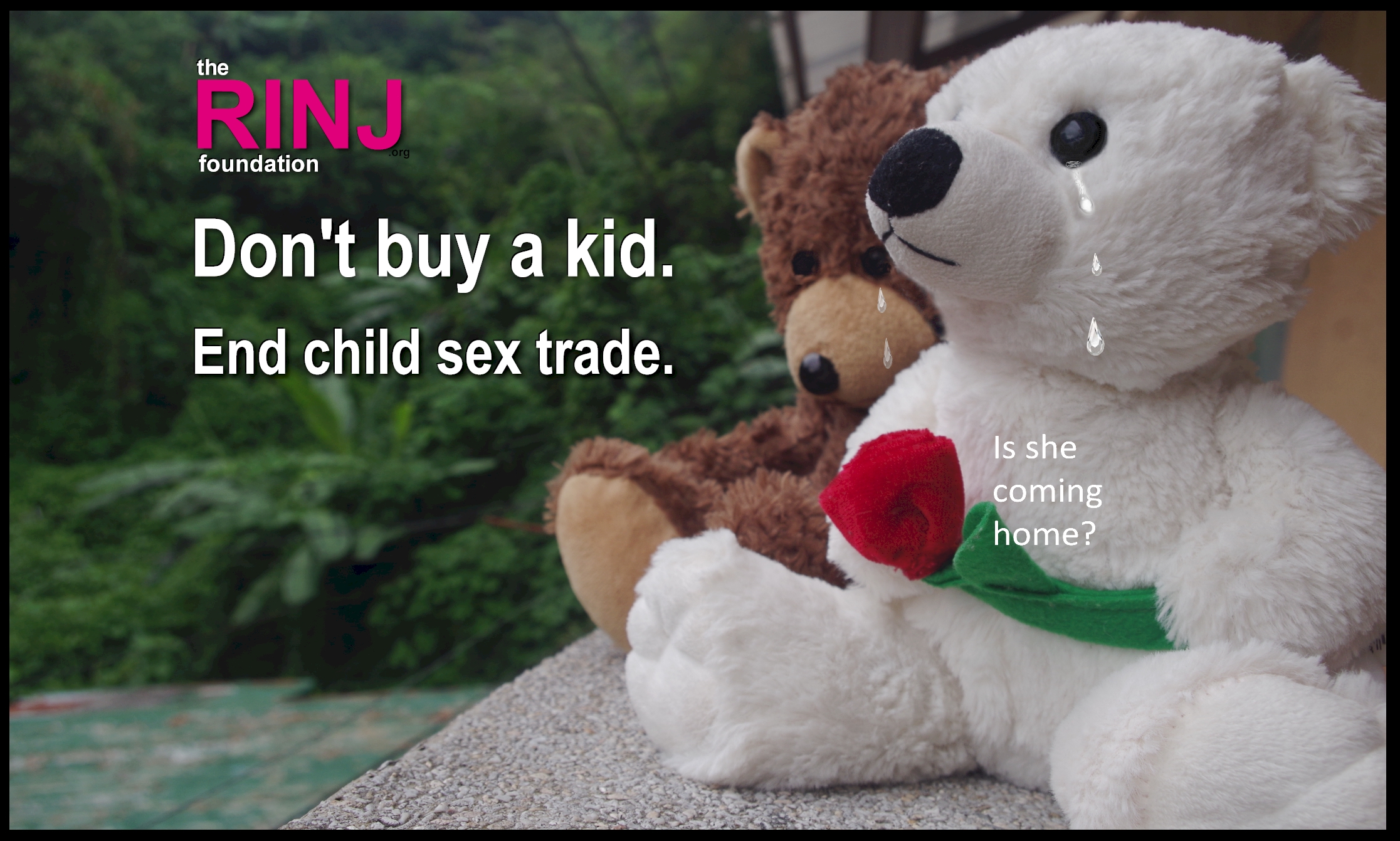 The penalty could be death among countries of the world that together comprise almost four billions of women and children, almost half the world’s population, if they are observed and word consequently gets back to their rapist. One example of this is the overseas domestic worker or child sex slaves. Opening their mouths about such crimes means their bodies may never be found. That has been found to be true about Filipino workers in the Middle East and Thai children in Laos and Cambodia child sex slavery rings. Those are just a few examples. Survivors don’t dare go to police. In may cases doing so will result in being raped again by these so-called people in authority.

The stigma attached to incest, rape  and sex slavery is so severe to survivors that nobody anywhere wants to walk into a public rape clinic or a police station.

Meanwhile women and children have pregnancies, minor infections and serious life threatening disease as a result of the crimes committed against them.

“When scumbags are kidnapping women and their children for sex, and when men at war are kidnapping and raping hundreds of thousands of women like the Rohingya and the Yezidi, we are in a fight. The fight is about the violation of women’s rights and  the wrongful use of rape as a form of genocide and as a weapon of war,” adds Katie.

Do the survivors envy the dead? 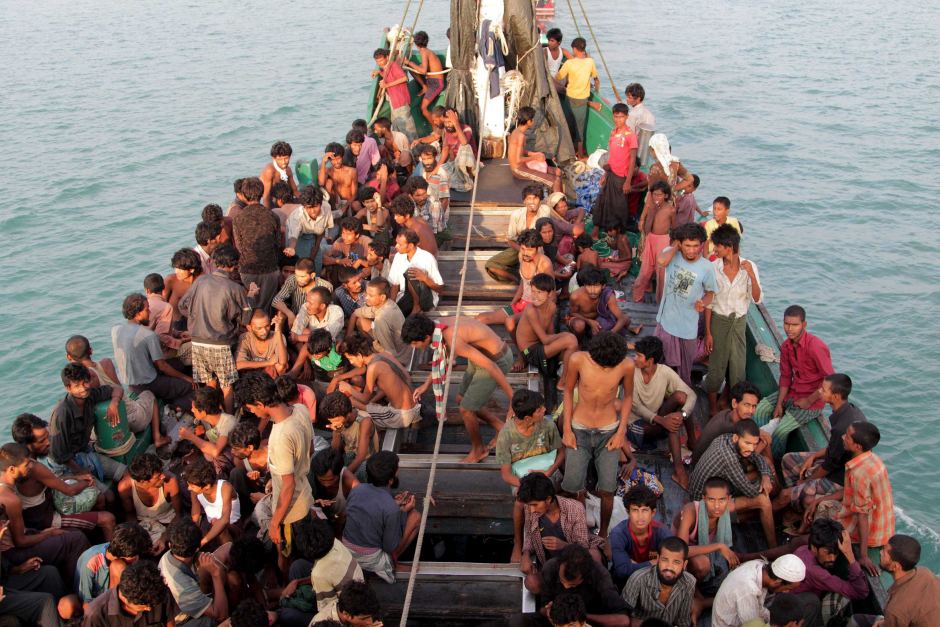 Three photos above. Source supplied. Thousands of new Rohingya refugee arrivals cross the border near Anzuman Para village, Palong Khali, Bangladesh.  As an estimated 500,000 Rohingya sought safety in Bangladesh between late-August and October 2017, UNHCR worked with the authorities to create a transit centre to prepare for a further influx, as some 11,000 people crossed the border on 9th October. They crossed by land into south-eastern Bangladesh through several points. Many came from the Buthidaung area in Myanmarâ€™s northern Rakhine state. Some said they fled torching and killings. Others said they left in fear ahead of anticipated violence. To reach Bangladesh, they walked for days, many carrying children. They waded through marshland before swimming across the Naf river that divides the two countries. UNHCR worked swiftly to accommodate as many as possible in the camps and settlements in Kutupalong and Balukhali, and provided emergency relief items.

The fight is at times violent.

“We once charged some Iraqi Kurdish soldiers called Peshmerga with rape in the city of Shingal in North Eastern Iraq in the days before the Islamic State arriving to slaughter thousands,” recalls Kate Alsop.

“While those persons were eventually executed by their own people, a global group of terrorists beset doctors and nurses of The RINJ Foundation, smashing their homes, attacking them at work and setting upon the medical board of directors in cruel and astonishing ways.”

In Mosul, Iraq, where RINJ had set up warehousing and distribution for teams working in Syria, it was a surprise to some extent seeing Islamic State fighters chasing the Iraqi army from the city.

For the bizarre men who came from around the world to rape nine-year-olds in Mosul with impunity, something the Islamic State leader Abu Bakar al-Baghdadi decreed as a way to attract fighters, a growing underground resistance called the MuR began an insurgency to cause the freeing of those children and their older sisters.

Becoming proactive, the private security group that RINJ had engaged for its people’s protection cooperated with Coalition Forces in identifying bad actors and prosecuting threats before they were able to murder more innocents. Some good articles have been written that somewhat tell that story. But yes, it is a violent story. Many Islamic terrorist, genocidal rapists were massacred by women, some of whom would walk up to a car door, put a gun to the driver’s head and execute the person after unequivocally identifying the war criminal. Sadly, that woman died during a firefight near the Tigris River a year and a half later (Read In loving memory of Gila. Killed by ISIS in Mosul).

As activists fighting to remove from Facebook the videos of a Canadian girl being raped at a frat party the Foundation in its early days called itself the RINJ Campaign.

The group had been involved in helping families recover female teens who had been absconded to religious fanatic groups in Oklahoma and nearby US states.

“The young persons were being exploited for sex and labour,” says Katie. Some of those cases may still be ongoing in the courts as lawyers try to  recover general compensation and ongoing medical rehabilitation costs.

RINJ literally set up observations and eventually intervened in  the encampments on the children’s behalf under parental authority to get the kids  back to their families.

The family would typically be notified of the plan and prior to  an intervention would be brought to nearby accommodations so that  the first person the children would see in the recovery process would be familiar loving family member.

A working relationship with psychologists and psychiatrists of the US-based CRC Health Group on some occasions brought survivors to cognitive therapy centers or addiction centers. The CRC Health Group began in 1986 as Sober Living By The sea.

The precursor activities of The RINJ Foundation included a response to claimants of FGM (Female Genital Mutilation) In The USA. Numerous approaches were used including the extraordinary effort to assist a claimant of refugee status in Canada.

The Canadian Refugee Board hearing judge admonished the claimant, a teen of 19, saying that there was “no way that a doctor in the United States would ever perform a Female Genital Mutilation procedure”.

In another case, a woman in her thirties who had been undergoing psychological  therapy for inexplicable bouts of depression was helped by Canadian immigration officials who suggested an alternative method of entering the country. She followed that advise and has since undergone corrective surgery at University College Hospital in the United Kingdom.

“It is hard to define exactly what motivates activists and human rights defenders,” says Santiago of The RINJ Foundation. “But  they are determined and insatiable people when it comes to helping their fellow men.”

According to the two women, RINJ is currently active in combating:

Notes Katie, the same distributed health care progamme used in Iraq and Syria from 2013 to 2017 is being applied in Idlib, Syria since 2017.

“This denies combatants the easy opportunity to bomb big red crosses on their war maps because it is not revealed to anyone the location of central health care and medical supply repositories when mobile health care is delivered at the street level in communities. Stealth health care is the doctor bag and a pair of rugged shoes.”

“They killed our colleague EMS worker Hossein and others we love. This knowledge of a serious war crime is not just going away,” she added with a strong voice. 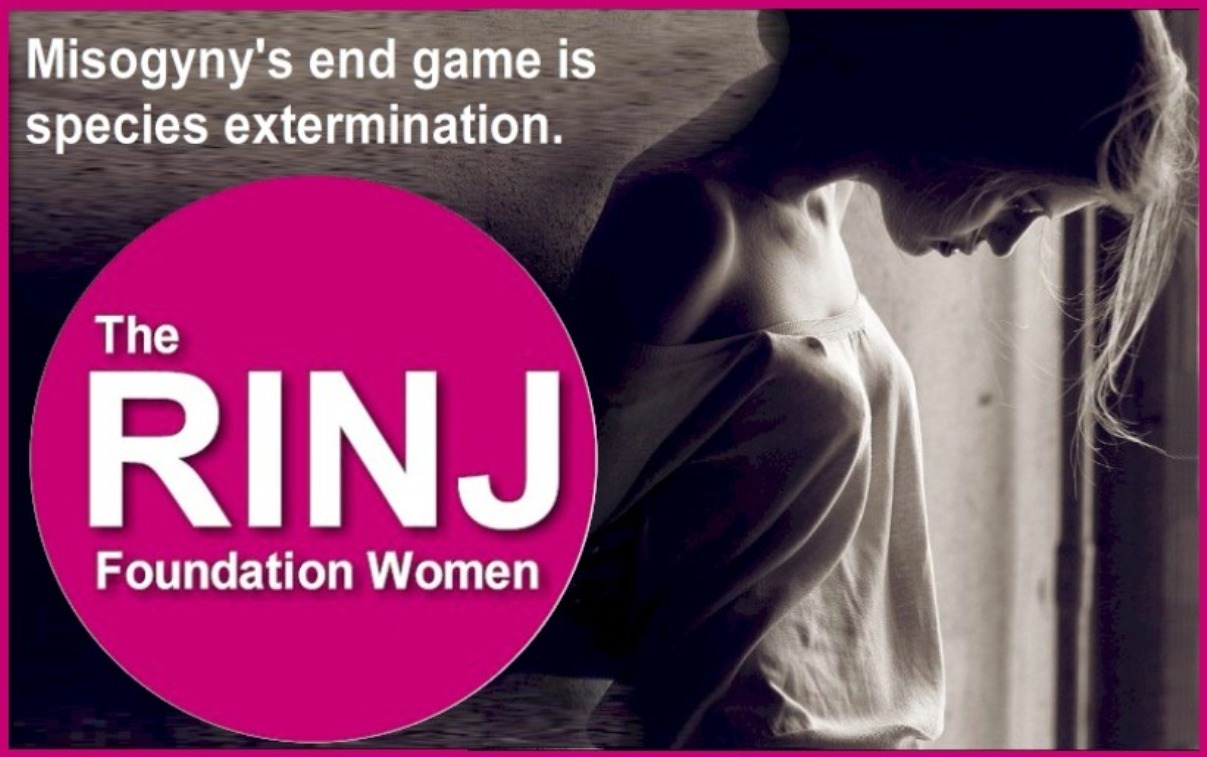 The stigma attached to incest, rape  and sex slavery is so severe to survivors that nobody anywhere wants to walk into a public rape clinic or a police station.