In a series of visits by a patient to a medical clinic in the northern part of Idlib Province in Syria, not far from Idlib City, a teenage female was suddenly one day escorted forcefully by a male person.

A security guard at the clinic stopped the misbehaving male and a physical altercation resulted in the male being handcuffed and detained while the female was quickly rushed to attend with her medical care provider. The alleged criminal belligerent was released later but after further altercation was again detained by security.

by Melissa Hemingway
Author’s note: Getting source approval for this story was like extracting a lion’s abscess tooth. Approval came because of the importance. There seems to be a widespread belief that the three million people under siege in Idlib, Syria are all Salafi Jihadist terrorists or their supporters. That is either wild imagination or it is a deliberate ruse to excuse the slaughter of civilians that is taking place. Most Syrians deplore the leadership of the country because it is run by a psychopathic murdering criminal, hence that is a mute point and nothing special about Idlib. The indigenous people of the Idlib region are farmers who once grew olives and produced the most famous range of products from their crops. Others living in the area now are migrants from other war-torn areas. They are all under the oppression of numerous salafi extremists exported from Saudi Arabia; and the oppressive Bashar al-Assad regime. Idlib is no panacea for anyone. It is a death trap and a humanitarian disaster that is unfolding without any accountability for the perpetrators. The only relief has come from Turkey and the rare statesmanship of Vladimir Putin’s once lasting and recently intermittent ceasefires. Mr. Putin, alas, may be too busy with other things to rein in Bashar al-Assad. Or maybe the Iranians who control Assad’s government are now too strongly influencing the military. In the meantime, Assad by association is going to earn Mr. Putin a gallows sentence along with himself unless this mass murder is stopped

The female patient told her attending nurse practitioner that the male person who accompanied her was in fact her rapist. She is a child who is estimated to be 2o weeks pregnant. She is a minor child deemed to be likely too small for vaginal delivery of her infant. That medical assessment as yet has not changed. She first presented at a time when termination was contraindicated. 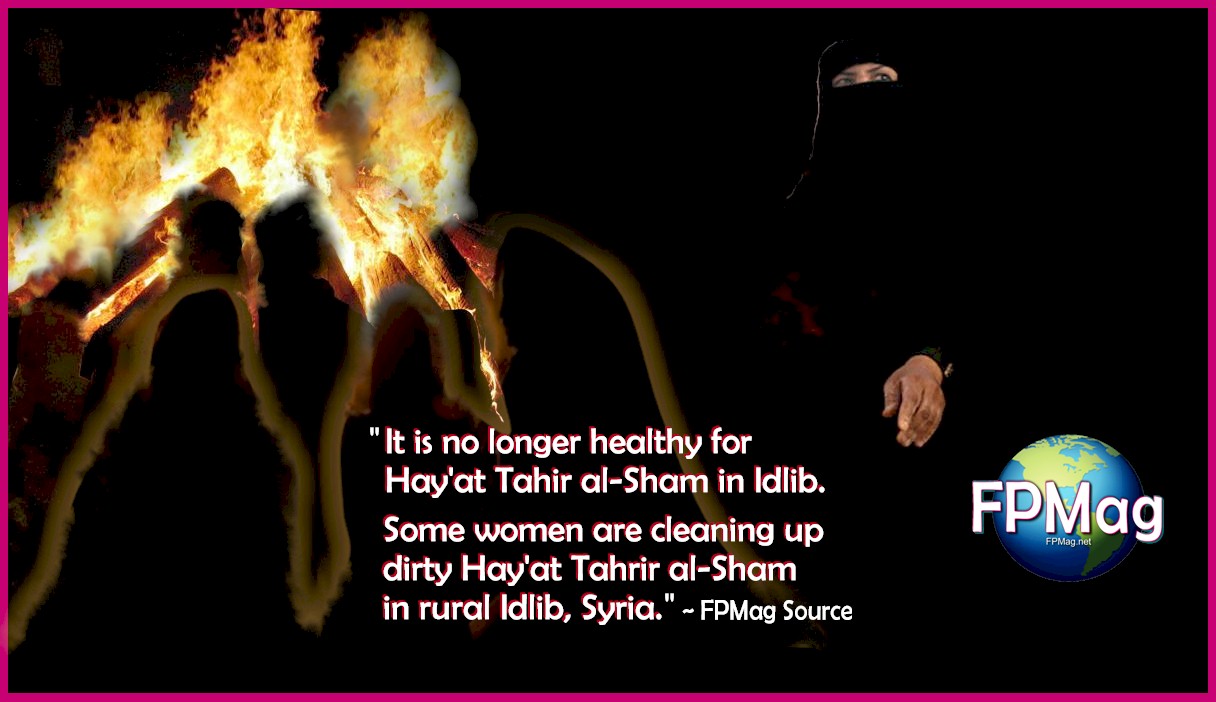 It is no longer healthy for
Hay’at Tahir al-Sham in Idlib.
Photo Art: Rosa Yamamoto FPMag

She claimed she had not seen the male person for some weeks but the male had returned and attended on her to pressure her to demand from hers and her baby’s medical caregiver some Opioid-based pain management medication which is why he had accompanied her to the clinic. Of course such medication is contraindicated for the pregnant youth and the clinic administration policy after years of experience in war zones is to not stock any drug that has a street value because of robbery risk.

As a consequence of these events, the female’s case was escalated and redirected to a heavily defended and very distant safe-house where she will receive daily care and monitoring. Once her baby is in the advanced stage of development having a high survival probability without putting the child mother at risk, a cesarean delivery, a surgical procedure used to deliver a baby through incisions, will be offered to the patient and her family which intends to care for the infant.

The HTS Attack on an Obscure Clinic was done by exploiting a rape survivor/sex slave.

Meanwhile, the uncooperative male person was held until last Friday when during the night or early Saturday morning, five Hay’at Tahrir al-Sham (HTS) ‘street-gangsters (literal translation)‘ entered the clinic. These HTS intruders overcame the sole security guard and released the male person who joined this group to rob the clinic, removing money, jewelry,  pharmaceuticals, and the possessions of patients and workers.

“One individual even stole an expensive teddy bear from a four-year-old girl’s overnight-stay bed”, says Nadine, one of the younger and most enraged nurses.

Injured Patient Identified one of the Attackers

As dusk approached later that day, a group of security operators returned to the north of Idlib from a sojourn they had taken to another facility in the south of the Idlib governorate. They first of all helped in a crash evacuation of the clinic to another facility. Then they went in search of the attackers with the help of a patient who had been able to identify a person she recognized.

During the past weekend, a firefight broke out in a small rural community farm which had been overrun by HTS.

Leading up to that event, a canvass of local farmers revealed that the owner of the farm had “neither been seen nor heard from in the past year”, says the security guard who had been overcome on the early Saturday morning raid but had recovered sufficiently  to accompany the squad and identify perpetrators on the recovery effort to return the needed medications to medical practitioners and their patients.

The recovery squad is arguably part of a growing ‘armed-civilian’ reaction to HTS oppression and thievery. It began as a response to HTS robbing farmers of olive oil and other olive crop products the locals sell or trade for goods they need to keep their families alive.

The recovery effort produced a substantial list of items including chronic patient care products like diabetes and cardiovascular pharmaceuticals plus precious antibiotics. The thieves had likely been unable to identify the items they stole in their search for narcotics.

Speaking to Behar Abbasi of FPMag,  Simon Baldock, a security specialist with a private security company working in Syria said, “It is possible these persons are also attacking health care providers as a method of oppressing the locals.”

But the security professional dismissed that in this case saying, “But more likely this brutal attack on a medical facility was a punishment for the people who had de facto-rescued the HTS fighter’s “child bride” who sought refuge,” and he emphatically clarified, “but who, on her own statements, and her well-known medical history, is a rape survivor and a slave to the HTS.”

“She is now gone from the region,” he added.

“In leading the attack on the thieves,” said Baldock, “our canvass produced a number of unsolicited volunteers who begged us to be included in the recovery team. Even though we declined saying we did not have sufficient equipment to support these volunteers, they produced their own crude weapons which amounted to varmint protection that farmers would be using.”

None of the volunteers were injured in the firefight say the security workers, and by 2:00 am the local volunteers  had removed the bodies from the farm and “cleaned the place up a little in the hope that the owner would someday return to his family’s property”.