For many nations the fight against the novel coronavirus SARS-CoV-2 is a struggle. The Republic of the Philippines is no exception. But the Trump war against China has made the struggle much worse as both China and America vie for military control over the Philippines, America seeking a warfront away from home and China trying to prevent American missile launch facilities in its back yard.

With some regional exceptions, the Philippines has used a military approach to fighting the coronavirus, instead of a medical approach, locking down the largest populated island in the archipelago, Luzon, since mid-March, and issuing a shoot-to-kill order against those of the Philippines citizenry who do not cooperate. An estimated 50 million people live on Luzon.

In the city of Baguio in the Cordillera region of Luzon Island, the local mayor has been commended by the World Health Organization’s local representative for “using a test, trace and quarantine methodology similar to that of South Korea,” which has worked very well.

Another kudo to the Philippines gifted the President Duterte decision to await a vaccine before sending children back to school.

As the coronavirus surged in the Philippines with substantial portion of all cases occurring in the past dozen days or a little more, the government of the Philippines has invoked its anti-drug  remedy of police and military home invasions to escort Filipinos to so-called isolation facilities, or prison if they do not cooperate.  (See:  Philippines Eduardo Ano says cops to detain COVID-19 sick By Katie Alsop, Tue, 14 Jul 2020 17:57:07 GMT.)

The mission, according to General Eduardo Año, a retired Philippine Army (AFP) general now serving as the Secretary of the Interior and Local Government, is to coral the people in poor districts who cannot safely self-quarantine at home to enter official quarantine facilities. The Secretary’s initial information releases caused widespread concern for human rights violations.

Those concerns have not been assuaged for people in several slum areas of Manila where the costs of the war on drugs has been many extrajudicial killings among the poor.

Presidential spokesman, Harry Roque, said: “Let me make it clear: There will be no house-to-house searches for COVID-19-positive patients. They (patients) will have to be reported by the persons themselves, other members of the household, or their barangay (village) officials.”

If patients were unable to self-quarantine, they could “be fetched” including by force, from their homes and “transferred to a government facility.”

“The methodology seems identical to what was used in Wuhan, China,” noted a medical practitioner at Manila Doctors hospital.

“In the context of recent developments including the draconian attacks on our media, closing down the top broadcaster with millions of subscribers; jailing the editor of Rappler; imprisoning critics like Senator Leila DeLima, and the human-rights violating anti-terror act which removes habeas corpus, or whatever you call arrest without warrant, this government has zero trust. And I am sick of this. My colleagues are dying all around me and I wonder why I come to work each day for another 20 hours to fight a losing battle against the corona virus for a government that does not support me in any way. I have reused this mask all week!” said the doctor who like other frontliners in the Philippines  is at his wits’ end.

Senator Leila De Lima, a true global hero to women, and a political prisoner of the Duterte Regime, spoke on Thursday on the plight of  nurses of San Lazaro Hospital (SLH) saying “My office has received information that frontliners of Jose Reyes Memorial Medical Center are made to endure sorry conditions. And yet these workers in sweat-soaked PPEs still show up – day in and day out, and holding on despite the fatigue, the lack of adequate government support and absence of prioritization,” she itemized on 16 July.

“However, they, who we laud as heroes, are now crying foul. The worst part of it all is the fact that these big hospitals are within an arm’s reach of the Department of Health, and yet, the very Department which is to stir this nation to survival, has either numb senses to realize the crisis that is happening within its very backyard, or has actually just opted to turn a blind eye,” said the world renowned human rights advocate.

Over 3,000 health workers in the Philippines have been infected with SARS-CoV-2, the virus that caused  COVID-19, and more than three dozen have died.

The Alliance of Health Workers in the Philippines have joined a long list of entities and officials demanding the resignation of the Health Secretary Francisco Duque III who seems to be mimicking US President Donald Trump in a frenzy of spin doctoring in lieu of an actual healthcare plan for fighting the novel coronavirus pandemic.

“The statistics coming out of the Philippines are worrisome,” says Frad Harris, a biostatistician and computer scientists who prepares the civil society daily reports on the global pandemic.

“The COVID-19 deaths are so far out of line with the extraordinary excess death increases over the period averages from 2014 through 2019 we do not like publishing the fudged numbers issued by the Philippines DOH. We know they are inaccurate more so than what we encounter in other countries. That the percentage of deaths has dropped to lower than any nation on Earth does not even reach the body counts at hospitals.”

“Also, the Philippines national government has managed to test far less than decimal one percent of its population while it is repeatedly testing its ruling class and its families.** Consequently it has no idea whatsoever how many infection cases there may be.”

“We estimate there are 1.1 million cases in the Philippines at least based on a globally defined algorithm that evaluates actual Philippines test data and determines mild and asymptomatic cases,” Harris continued.

“The importance of this number is that as cases mature, the (R0) rises in the provinces and in high density ghettos of the large cities. The more infections there are, the more infections and deaths there will be. In Cebu City for example, there is little incentive to underreport but in Manilla there is a continuing competition to boast better management of the disease hence underreport.”

** According to Wikipedia authors, “Public officials receiving quick results on their tests was perceived to be tantamount to receiving priority treatment as numerous people considered as actual patients under investigation – many of whom were frontliners – were dying before their test results were out.”

As the Philippines becomes economically crippled by the pandemic and the militaristic approach to mitigate the pandemic, the two warring parties in the ‘hood, China and America, are killing the host Republic of the Philippines with broken promises and COVID-19 infections as China struggles to break the Philippines from being an appendage to American power. 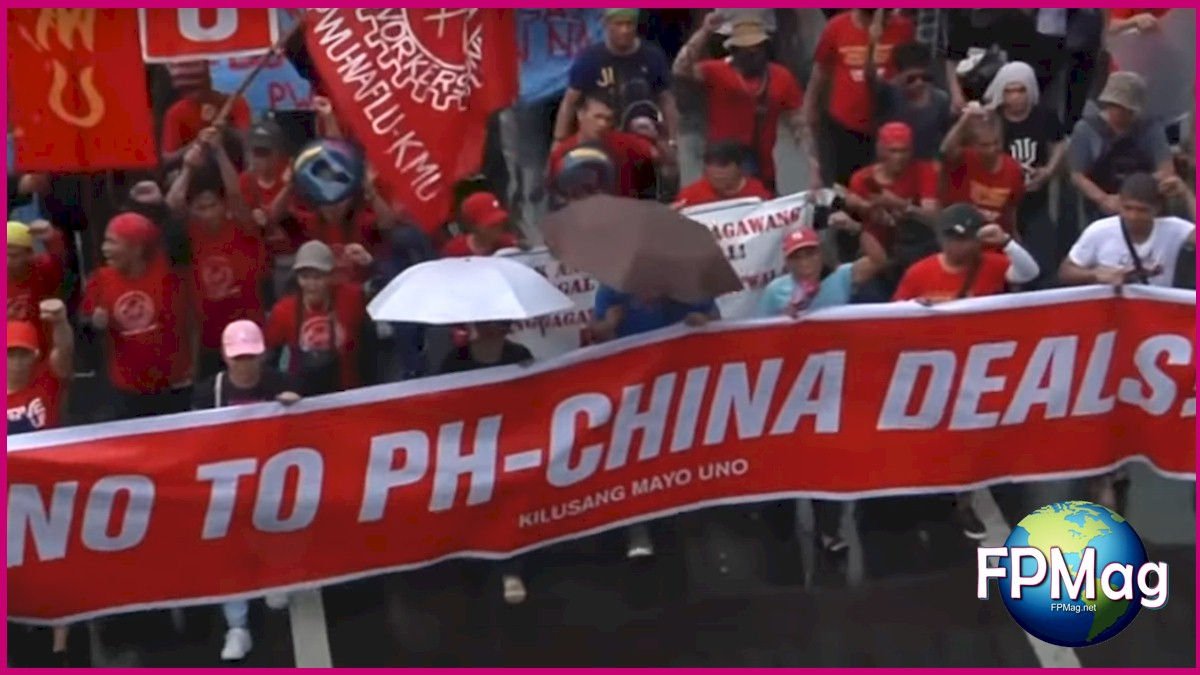 Protestors in Manila against the Duterte government have complained about China infiltration. Despite the promises of China’s assistance to nation-wide infrastructure building, nothing has been realized. Photo Credit: YouTube. Art/Cropping/Enhancement: Rosa Yamamoto FPMag

None of the three sides, China, America, and the ultra corrupt Philippines government have done anything in this three-way courtship for the Philippines people. The result has been COVID-19, pregnant twelve-year-olds, a myriad of kidnappings for ransom, and hundreds of thousands unemployed Philippines offshore online gambling workers, locked down, angry with everyone, and finding other areas of crime as the online gambling world sinks into an abyss of unemployment and travel restrictions. They have their own official government acronym, “POGO” which stands for Philippine Offshore Gaming Operator.

America’s neo-colonial appendage in the Philippines Archipelago is not helping the fight against the SARS novel coronavirus. As has been stated by so many health care workers, and in fact, the spread of the disease is surprisingly on the upswing, despite the fact that the population is theoretically locked inside their homes. Where is it coming from? Filipinos have been locked down at gunpoint for months.

China’s million person influx into Manila for gambling, crime, and espionage has not helped.

Based on the millions of square meters of real estate used in Manila for online gambling casino operations and other activities of Chinese crime syndicates, at least a million Chinese were in Manila moving in and out of Manila through the period October 2019 to February 2020.

Chinese and American operators are bringing COVID-19 into the Philippines? Some people believe that.

It has been alleged by Philippines Senator Panfilo Lacson that China has a full battalion of soldiers in the Philippines, or even more. All indicators suggest that is true.

“I can only say that my source is fairly reliable, based on past information that he has provided to me. The intelligence community should exert extra effort to gather information in this regard,” Lacson told the Philippines Senate.

In a radio interview in the first week of March, Senator Richard Gordon said Chinese Military members were “likely using Philippine Offshore Gaming Operators or POGOs for intelligence gathering in the country”.

In the early part of this year, Philippines President Duterte ordered an investigation which eventually led to a series of linked corrupt officials taking bribes from Chinese coming into the country and paying money ‘under-the-table’ for on-the-spot visa approval without vetting or inspection.

That may have been going on for years, since at least 2017 when Philippines National Police police staff sergeant Magdaleno Pacia, was implicated with other Philippines officials in at least six kidnapping cases involving 11 Chinese nationals, acting as mostly goons for the gambling syndicates. The kidnappees had run up gambling debts and the Syndicate hired Philippines Police and Army personnel to kidnap them and extort USD $millions from their families.

At some point Pacia left the police force and began operating his lucrative business for the syndicates hiring serving members of the military and police as well as retired persons.

The payoffs are said to be in the billions of Philippines pesos throughout various government licencee agencies and permit issuers.

Ironically the Billions of Dollars coming into the Philippines from Wealthy Chinese (illegal) Gamblers don’t fall past the hands of the Syndicates and those they pay off. The gambling syndicates do not pay taxes. Most are unlicensed.

According to a doctor at the Manila Doctors’ Hospital on United Nations Boulevard in Manila, “the only thing these criminal operations bring to the Philippines are disease, violence and higher commercial rental rates because the rich syndicate operators come in and buy up floor space, for cash, paying top dollars.” 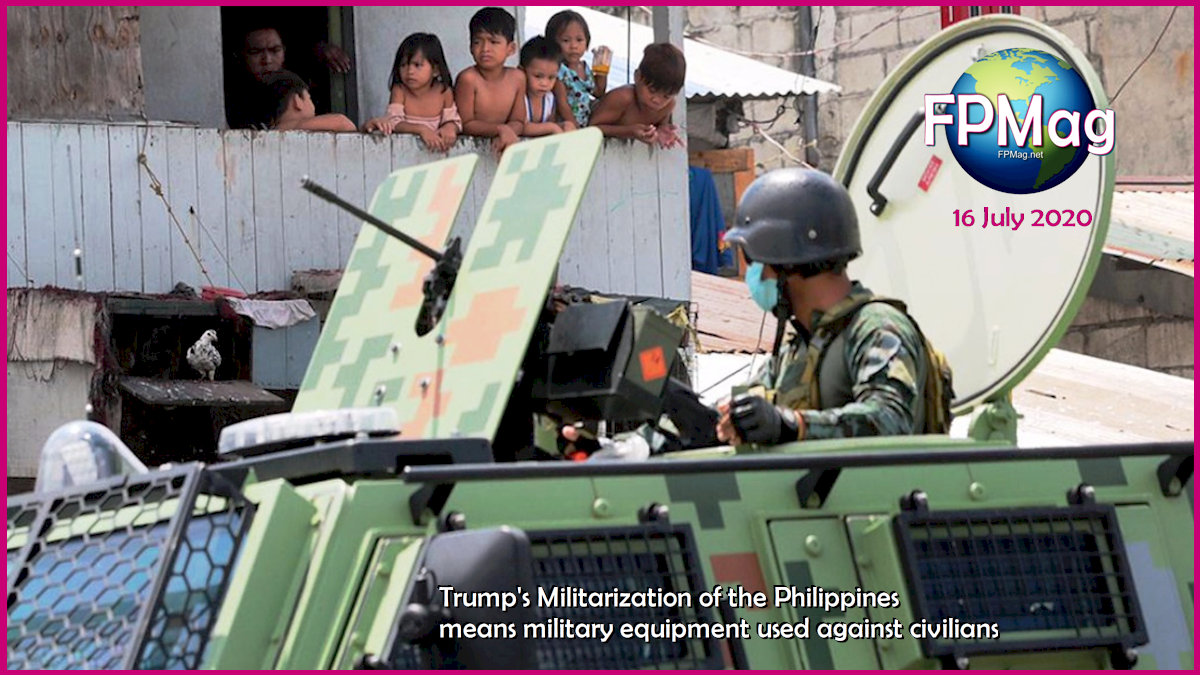 16 July 2020 Navotas City, Philippines. American militarization of the Philippines has meant more weapons to use against the FIlipinos. In this case, military tanks and armoured personnel carriers are being used to force a lockdown in the city of Navotas. Photo Credit: Twitter.  Art/Cropping/Enhancement: Rosa Yamamoto FPMag