Five Eyes: Bridling prospects for human development while trying to get the USA neocons reelected. Editorial

“Humanitarians within civil society have become very worried about the loss of human development and the complete abandonment of global values in the past five years. Feeding some of the problems is a rabid pandemic of racism breeding pure hatred. Some of our institutions may be at fault, but also those of the World’s most important philanthropic nations have become pariahs. Let’s take a look at the cost to children and their families around the world, of organized racism.”

The “Five Eyes” is working these days on getting Donald Trump re-elected. On this it is sided with Russia and China which have the same goal.

But the Trump Administration is killing families through gross negligence and gross incompetence. Another four years would likely destroy America.

Good leadership is required to steer a nation through the minefields of major crises.  America is in one and is failing badly.

The Trump administration was masterfully engineered by Vladimir Putin and other brilliant minds to destabilize America. It’s a textbook architecture that America will not study until somebody admits the truth.

In the case of China and Russia seeking a continuation of chaos and instability for America, the goal is clear but in the case of the Five Eyes nations, the perhaps unclear goal is to maintain the ultra-right wing budgetary gravy train even if Daffy Duck is the leader.

“Should Trump lose, the heyday of lavish travel, feelings of major importance, big bonuses, huge security technology budgets, power, control and a manufactured enemy to scare the crap out of the electorate with, hate for an alleged demon that is non-White, this panacea will all vanish,” postulates political scientist Moishe Karem in Tel Aviv.

“Under Biden, meetings will be rare. The back-room boys may as well talk to themselves and play solitaire endlessly if Joe Biden comes to town with of all things a Woman Vice-President. ‘WTF’, and ‘Foxtrot-Oscar That!’, they are saying now,” says Karem.

These must be scary times for the right wing black-and-white-thinking toxic warmongering hate-filled Twinkies-and-Coke throwbacks. All they can do now is have a coke, a smoke and act tough. Or must they?

They seem to be feeding the anti-Asian monster using a D9 bulldozer pushing out loads of piffle for public consumption.

“In fact, not only are the Chinese responsible for the thousands of years old coronavirus but they may also be in league with aliens who are manipulating the climate,” was how one Facebook post read before the user was banned for another reason and all their posts vanished.

That’s the work of propagandists, like the “Five Eyes” . 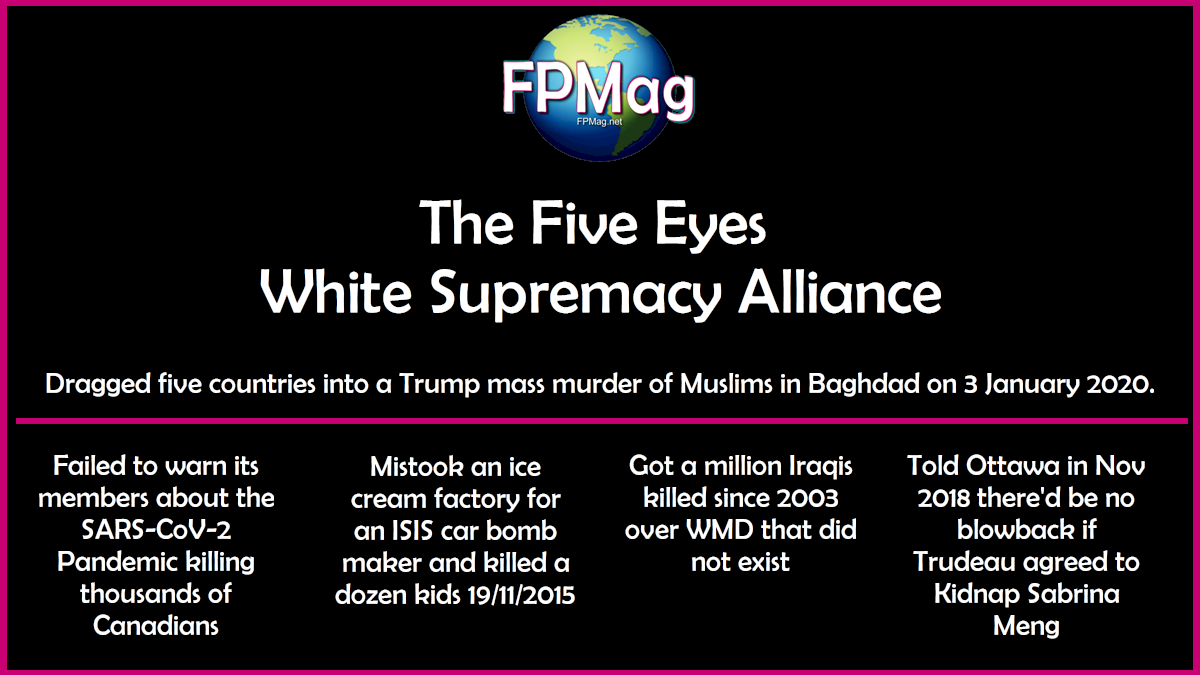 Five Eyes started out as just Britain and the United States spying on Germany and their own allies in  WWII but in 1948 Canada joined and New Zealand and Australia entered in 1956. It’s a White-Anglo Club.

Bullying China and all other countries where the people “do not look like us” bridles the prospects for success of the whole of the human race.

Anglos versus non-whites has disadvantaged human development far too long.

China’s population is 1.393 billion with another 50 million Chinese living outside China.

In all the population of Asia is 4.5 billion people including 1.3 billion in India and 31.8 Million Russians who live in the Asian side of that transcontinental nation.

The USA, Canada, New Zealand, Australia, and the UK have been calling themselves the “Five Eyes” often lately. It is supposed to invoke a cloak of legitimacy for “we must do this but we can’t say why”. 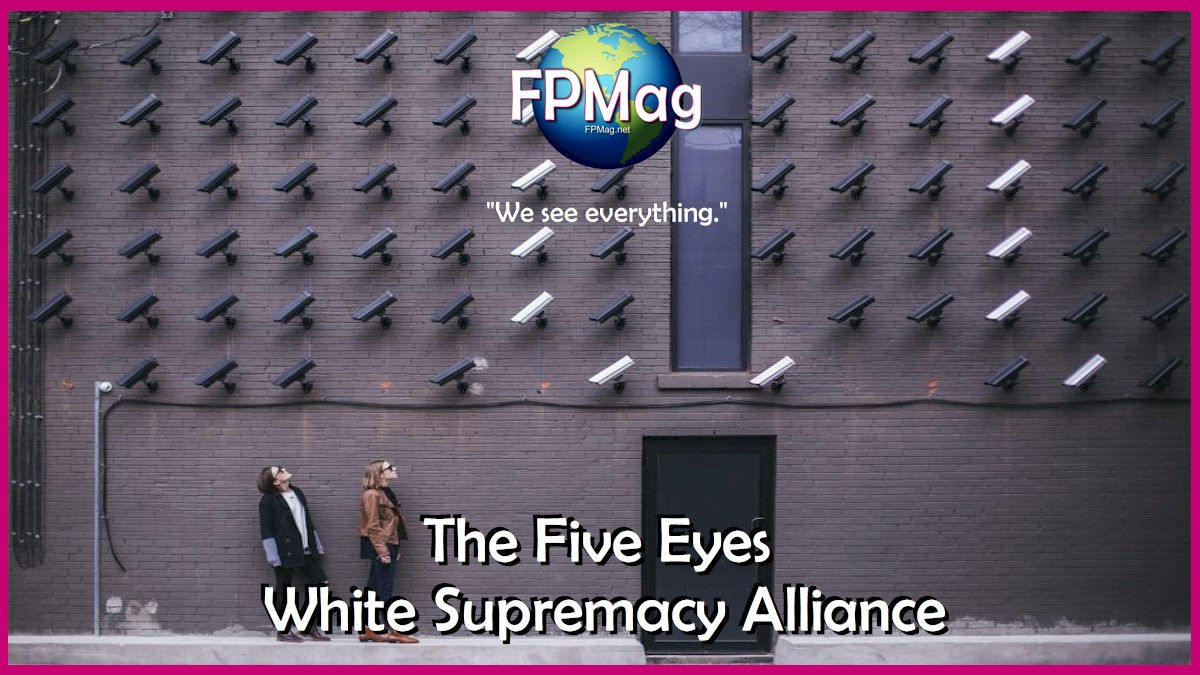 1.) The Five Eyes group is an exclusive White-Anglo racist coven of countries that spy on the non-white world using the most expensive and elaborate spying technology unlimited money can buy.

2.) These Five Eyes crews are the clowns who said Saddam Hussein had nuclear weapons to attack North America with and with that lie caused the deaths of a million Iraqis and unending Middle East instability.

3) These Five Eyes crews are the unscrupulous liars whose faulty intelligence caused the bombing of an ice cream factory on 19 November 2015 in Mosul Iraq injuring and killing dozens of children and adult civilians, at a place where every day, kids came to get free ice cream from the tailings.

4) These Five Eyes crews are the pretentious charlatans who told Justin Trudeau the SARS-CoV-2 virus would not hurt Canada. 20 Deaths per hundred thousand population, among the highest in the world, for the lowest population density nation in the world is a preventable catastrophe.

5) These Five Eyes crews are the morons who said it would be a good idea to play along with the Americans and kidnap Meng Wanzhou. FPMag has seen the Huawei presentation made to HSBC wherein all the due diligence was done and Huawei states clearly and transparently the transitioning relationship with Skycom. These HSBC witnesses are liars and they will not go unnoticed in the passage of time.

China is not an enemy of anyone. It doesn’t do as much sneaking and peeking as the Americans and British do. China is just doing its best for its wonderful 1.4 billion population of one of the oldest civilizations on Earth. 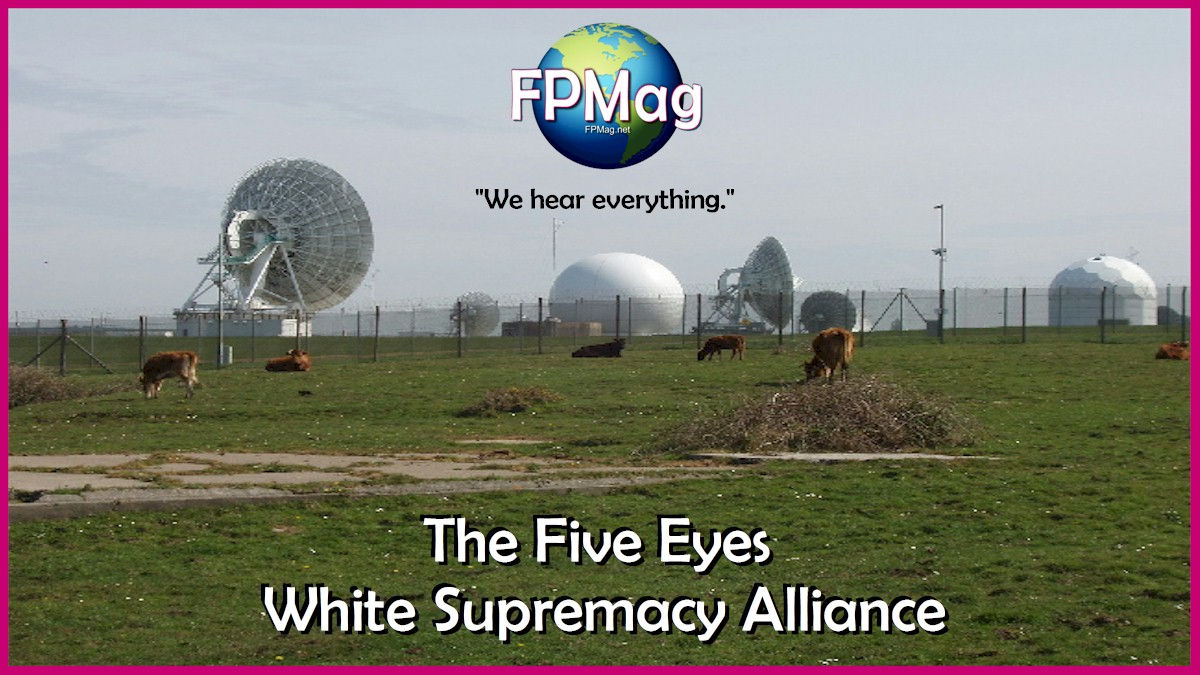 The American military industrial complex needs a new enemy or it will not be able to match or exceed the previous years trillions of dollars of military spending. But there are enough nuclear devices to take out Earth and five other planets of the solar system we live within. Now they need more warships and bombers.

In early January, some senior government officials in Beijing thought that China was being hit with a bio-attack from the West. Even open source satellite images show massive Chinese military movements.

Led by the United States, meaning the only agenda is the American agenda (according to a Canadian ‘member’ who does not wish to be identified), the FVEY group is now focussed on helping Donald Trump become re-elected on 3 November.

Much of the effort is focussed on creating the illusion that China is responsible for the enormous mess that America is in today because of its leadership’s inabilities at crisis management.

While a patriarch runs amok with greed and power/control issues, it bridles human development.

By the end of this year China will have 160 million 5G users and the average user will be spending one third more time using digital applications according to mainland China industrial estimates taking into account a probable slide in the number of online hours as lockdowns subside and people head back to work.

This is the engine that is driving apps and hardware technology development plus the internet of things. Nine hundred million mostly affluent tech-savvy users are demanding the best and getting just that.

Meanwhile Canada has the most expensive and slow smartphone service in the world and America has one that most of the time drops calls. Maybe that is because every call has too many listeners but it is also probably because the only good American technology that is user-driven in its design comes from China and that is being banned.

The effort to get Donald Trump elected by the power and money-hungry security community is causing ordinary people a tremendous disadvantage and bridling the advancement of the West.

Global values have gone by the wayside and human development is not in the minds of any countries but Germany and China.

No wonder the pariahs are ganging up on those two countries.

Where would you stand?