There may be pity for Americans and Brazilians but these two populations chose personality disordered leaders whose two-dimensions of existence do not include empathy and would lead to national devastation and global pandemonium. It’s happening now.

This article will dispel some of Trump’s lies and demonstrate how most of the world successfully followed the China recipe for SARS-CoV-2 suppression while a small few are killing us all. The trendline of the malfeasance of Donald Trump and Jair Bolsonaro is millions of deaths all over the world.

“These psychopaths, Trump and Bolsonaro need to be stopped and the world needs to apologise to the Chinese people,” says a biostatistician.

“The task is not to make an objective study of the truth, insofar as it favours my enemies, and then push it to the masses with an academic style; the task is to serve my own cause, always and unflinchingly with whatever story is needed.”

America, Brazil and India are failing where China Succeeded and proving their own words about China to be deliberate propaganda lies.

“The damage done by a few leaders will impact the entire world.
China set an example among 1.4 billion people, how to manage a ferocious pandemic. Some countries to the right of Russia followed the example and those to the left did not. The failures will impact all 7.7 billion people on the planet and have already slaughtered hundreds of thousands needlessly. Millions more will follow unless the human race faces this paradigm and solidarity follows,” says expert. 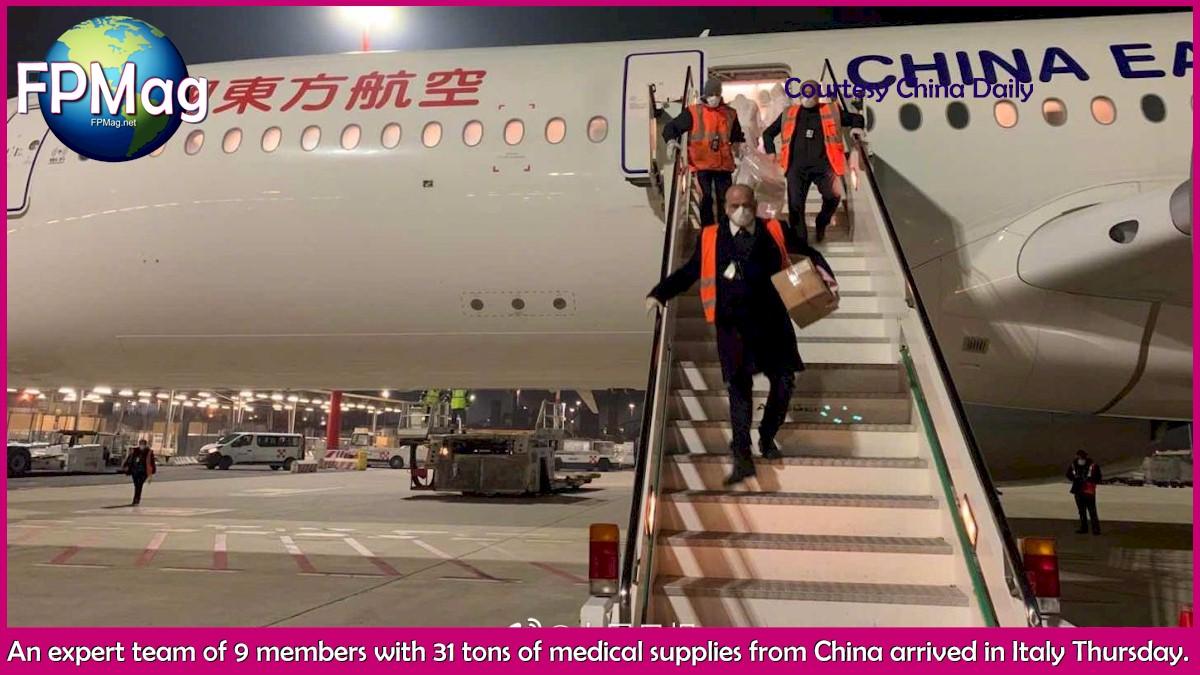 “It is angering the world,” says a Pharmacist in Manila from behind a plastic isolation screen. “American soldiers and sailors are all over the south of Asia and the Pacific spreading American coronavirus while we work in plastic tents and breath thru masks as we wait to hear if our grandparents died in the hospital. If every country did what China, Taiwan, Hong Kong and South Korea had done, this would be over months ago.”

The outright lies America told in 2020 are racist propaganda worse than what the Nazis spread in the late 1930s.

Here are some academic truths.

“Solidarity is an awareness of shared interests, objectives, standards, and sympathies creating a psychological sense of unity of groups or classes. It refers to the ties in a society that bind people together as one.”

When an Airbus A-350 wide body jet airliner of China Eastern Airlines, arrived in Rome and taxied to the cargo building of the airport with a team of doctors and 31 tons of medical supplies,  Italian Foreign Minister Luigi Di Maio enthusiastically and somewhat  emotionally, expressed gratitude to all Chinese people.

“Another lesson comes from China, during these days in which Italy is facing great difficulties: solidarity, with messages, aids, medical equipment, and doctors,” wrote Beppe Grillo, former leader of Five Star Movement, in his blog late on Thursday.

“As one of our proverbs says: A friend’s love is forever, born to be a friend in misfortune.”

Francesco Rocca, Chairman of Italian Red Cross, said he appreciated the Chinese experts who, after their arduous work in the front line of their own battle against the virus, chose to move forward by flying all the way to Italy to offer help.

“Tonight, (we had) the umpteenth proof thanks to the Chinese Red Cross that has arrived with a team of experts, and aids,” his organization posted on twitter.

One of the nurses without borders, nurse Sara Qin, who has been providing FPMag with source data from Wuhan, China says that this is not the only “mercy mission” Chinese medical crews are signing up for.

“I will be leaving soon to go on another that has not yet been announced. I was chosen because my section had a very good outcome for all patients,” says the fearless Chinese medical worker.

“If there is a heaven, surely my frontline sisters who devotedly helped others before SARS2 took them, will be the first to get their angel wings,” said Michele Francis, a missionary nurse in Venezuela and sister member of the The Nurses Without Borders. 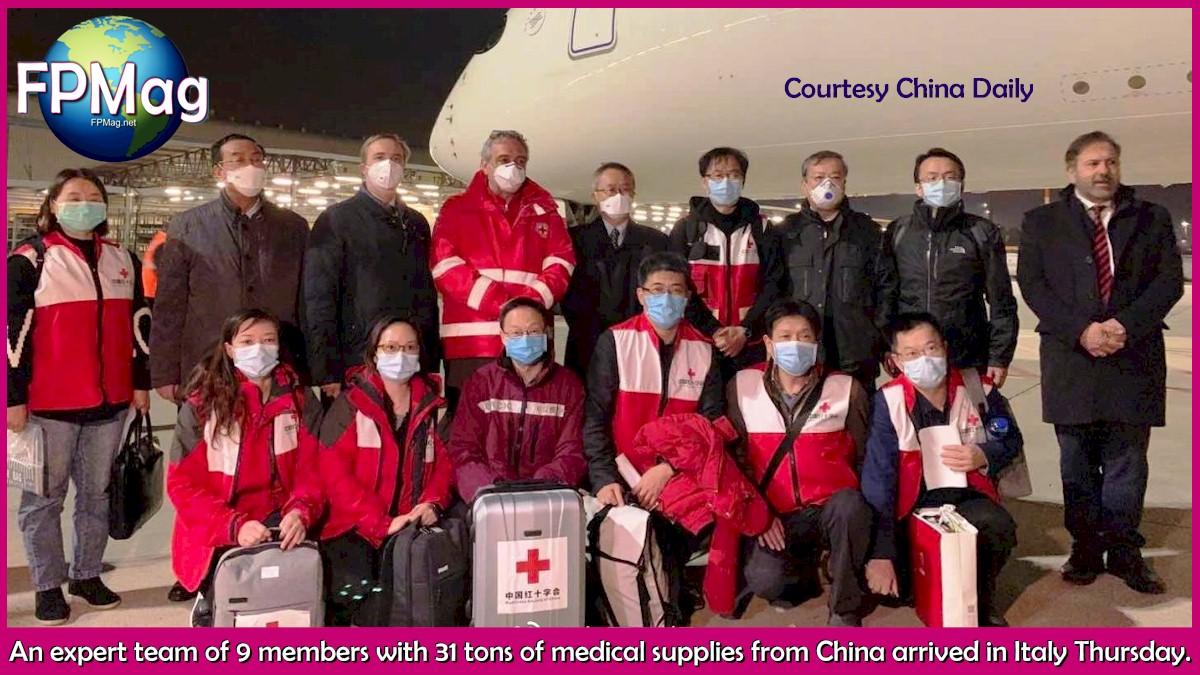 File Photo: An expert team of China’s frontliners with 31 tons of medical supplies from China arrived in Italy (story) as their colleagues did in many countries. Photo courtesy China Daily/Twitter Photo Art/Cropping/Enhancement: Rosa Yamamoto FPMag

Why is America not testing? America had no functioning RT-PCR  tests for the SARS-CoV-2 virus.

#Trump in Jan., Feb., & March curtailed production & distribution of functioning RT-PCR tests for the the #Covid_19 virus in order to keep the published infection numbers down for his reelection.
This will lead to thousands of dead Americans
Testing & containing is only weapon. pic.twitter.com/c0R8D3P0Sh

According to an interview published on National Public Radio:

Citing Twitter: NPR: “Trump did not push to do aggressive testing because more testing might have led to more cases being discovered of the Coronavirus outbreak, and Trump made it clear the lower the numbers on Coronavirus, the better for the president and his re-election this fall.”

NPR: “Trump did not push to do aggressive testing because more testing might have led to more cases being discovered of the Coronavirus outbreak, and Trump made it clear the lower the numbers on Coronavirus, the better for the president and his re-election this fall.” https://t.co/4N9PDRmotT

The proof of performance of leaders is in the numbers

“China’s statistical reports for the 2019-NCov / COVID-19 pandemic are no cake walk. This virus hit China ferociously. The outbreak was rough but under Xi Jinping’s passionate commitment to using all resources to fight the novel coronavirus, he has thus far prevented a catastrophe among 1.4 billion people,” says Fred Harris, biostatistician and computer scientist leading the team providing civil society’s hourly reports to the world on the coronavirus pandemic.

“The damage done by a few leaders will impact the entire world.

“China set an example among 1.4 billion people, how to manage a ferocious pandemic. Some countries to the right of Russia followed the example and those to the left did not. The failures will impact all 7.7 billion people on the planet and have already slaughtered hundreds of thousands needlessly. Millions more will follow unless the human race faces this paradigm and solidarity follows,” he continued.

Did China Deceive the world as Trump is bleating to the Yankee media that swallows this up like a little child eating chocolate? No.

“There is no evidence whatsoever to suggest that China deliberately altered reports. There is an increase in deaths not assigned to the epidemic in roughly the same ratio as most countries around the world, although in some underdeveloped nations where no testing is done, there may be some horrible shocks on faces as officials try to explain why the upper aged seniors have almost all died,” says Harris.

“The numbers are telling. China’s statistical data looks normal compared to over 200 territories and nations which reported long after China’s summary outbreak reports were created. Everything fits the pattern until one looks at the work of autocrats,” noted the biostatistician.

“There will be many surprises and unknowns revealed some day when the pandemic has run its course, but China will fit as a norm not an anomaly. Some countries like America, Brazil, Peru and Chile will do more than raise eyebrows, if those countries survive this pandemic and the thrashing their societies and economies are going to take as a consequence of what seems to be a runaway catastrophic nation killer.”

CNN Around the world perpetuates the propaganda lies.

“Listening to Fareed Zakaria on CNN obsess about a week in January in which somebody claims the Chinese authorities had a meeting during which the word “Pandemic” was used  one week before China officially said “pandemic” publicly is a reckless distortion of the facts. Fareed and CNN are telling lies deliberately as part of the American choir singing their national song, “it’s China’s fault,” says nurse Kathy Poon in Taipei, Taiwan.

“People were very angry about the strictness of the rules of the quarantine in China and how they were enforced, but every message was accompanied by a caring phrase, ‘this is for your own safety’.  I have mixed feelings about modern-day Beijing but I would defend China even if I was an alien from another planet. China did wonders,” she added.

“We are saddened by the loss of so many lives but we rejoice about the lives they had and more  than that, we are joyful that China’s many peoples survived and now wish to live better lives,” opines the grateful nurse who lost many friends to the pandemic.

For November and December of 2019, evidence has emerged to indicate that the novel coronavirus named SARS-CoV-2 existed in many places.

COVID-19 was thought to have first occurred in late December 2019 in Wuhan but new evidence says it existed in the population of Brazil in November 2019.

The COVID-19 epidemic is believed to have started in late January 2020 in France. Here we report a case of a patient in France, hospitalised in December 2019 in an intensive care unit in a hospital in the north of Paris for haemoptysis with no etiological diagnosis. RT-PCR was performed retrospectively on the stored respiratory sample and confirmed the diagnosis of severe acute respiratory syndrome coronavirus 2 (SARS-CoV-2) infection. Based on this result, it appears that the COVID-19 epidemic started much earlier in France.

Much will be learned, as Dr. Harris has suggested, after the pandemic will run its course, if indeed that does happen.

“It is also possible according to many scientists and think tanks that SARS-CoV-2 will be with us indefinitely like other viruses and become just one more threat to humankind,” says the biostatistician.

“The task is not to make an objective study of the truth, insofar as it favours my enemies, and then push it to the masses with an academic style; the task is to serve my own cause, always and unflinchingly with whatever story is needed.”-–-Adolf Hitler, (1924)