“America is now calling it spying but “studying” America in great detail is necessary for all countries because it is a danger to the world,” says an honest  Israeli security analyst.

“America is the White-Supremacist nation that elected a fascist con artist as President,” says Israeli strategist and security analyst Simon Baldock. “One needs to evaluate America in that context these days and when looking at the murders it is commiting, one needs to watch closely to be certain of not being the next target.”

Hence the US President has a crew of oleaginous sycophants, in particular the obese barrel of threats and epitaphs conning the public into believing he is a foreign minister but a White Supremacists to an extreme. Their actions and policies need to be assessed in the context of Ku Klux Klan doctrine.

The insidious nature of Trump malevolence has become an American malignancy. 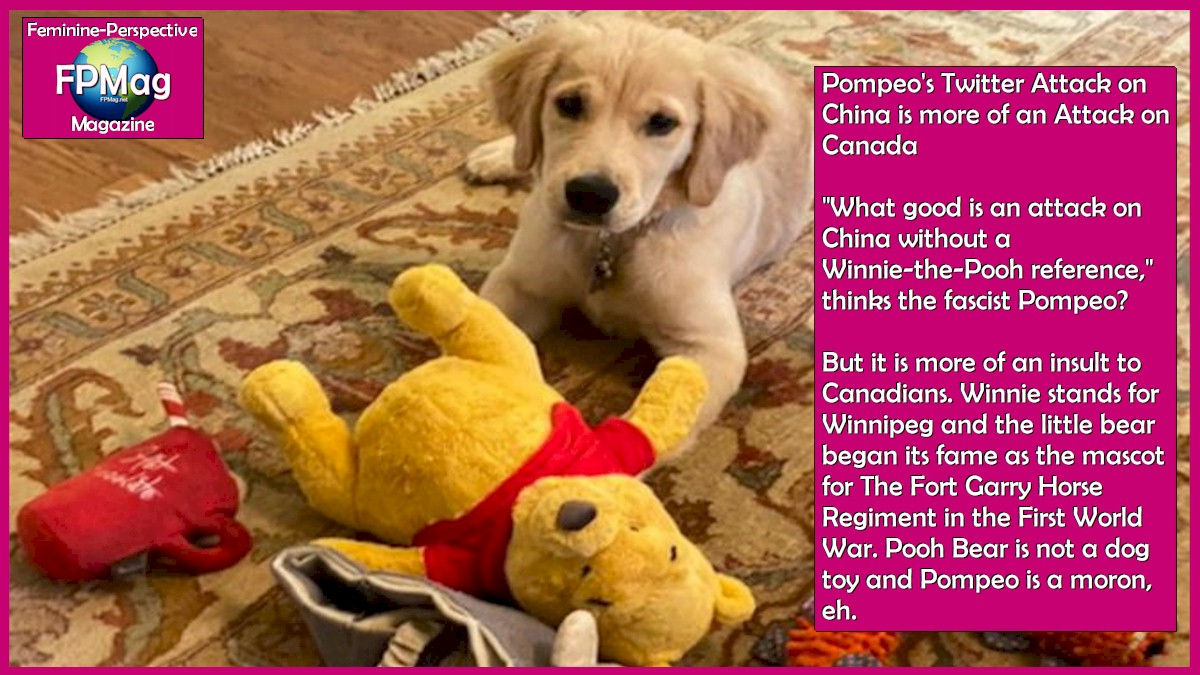 Pompeo’s Twitter Attack on China is more of an Attack on Canada “What good is an attack on China without a Winnie-the-Pooh reference,” thinks the fascist Pompeo? But it is more of an insult to Canadians. Winnie stands for Winnipeg and the little bear began its fame as the mascot for The Fort Garry Horse Regiment in the First World War. Pooh Bear is not a dog toy and Pompeo is a moron, eh. Art/Cropping/Enhancement: Rosa Yamamoto FPMag Photo from Twitter.

One of the reasons why the government’s of other nation states need to know what is happening in America is the narcissistic nature of America that like blinkers shades out the value of human life, never mind human development and global values. America is a dangerous nation led impulsively by irrational men without clear direction, that is now exploding in chaos—and death.

Or maybe its just a cult-like fascination with death?

“America’s demagoguery features a warped embrace of death. America kills all sentient beings with pride but no cause,” says Moishe Karem, a political scientist in Tel Aviv, Israel

The only way to truly change Communist China is to act on the basis of what its leaders do, not what they say. President Reagan dealt with the Soviets on the basis of “trust but verify.” When it comes to the CCP, I say, “Distrust and verify.” pic.twitter.com/5MHDSkCkcN

An alliance that murdered Washington Post Columnist Jamal Khashoggi on 2 October 2018 and bombed a school bus full of kids on 9 August 2018 is claimed to be healthy which it obviously is not.

But is it buffoonery or is it psychopathy? Look at the picture below. 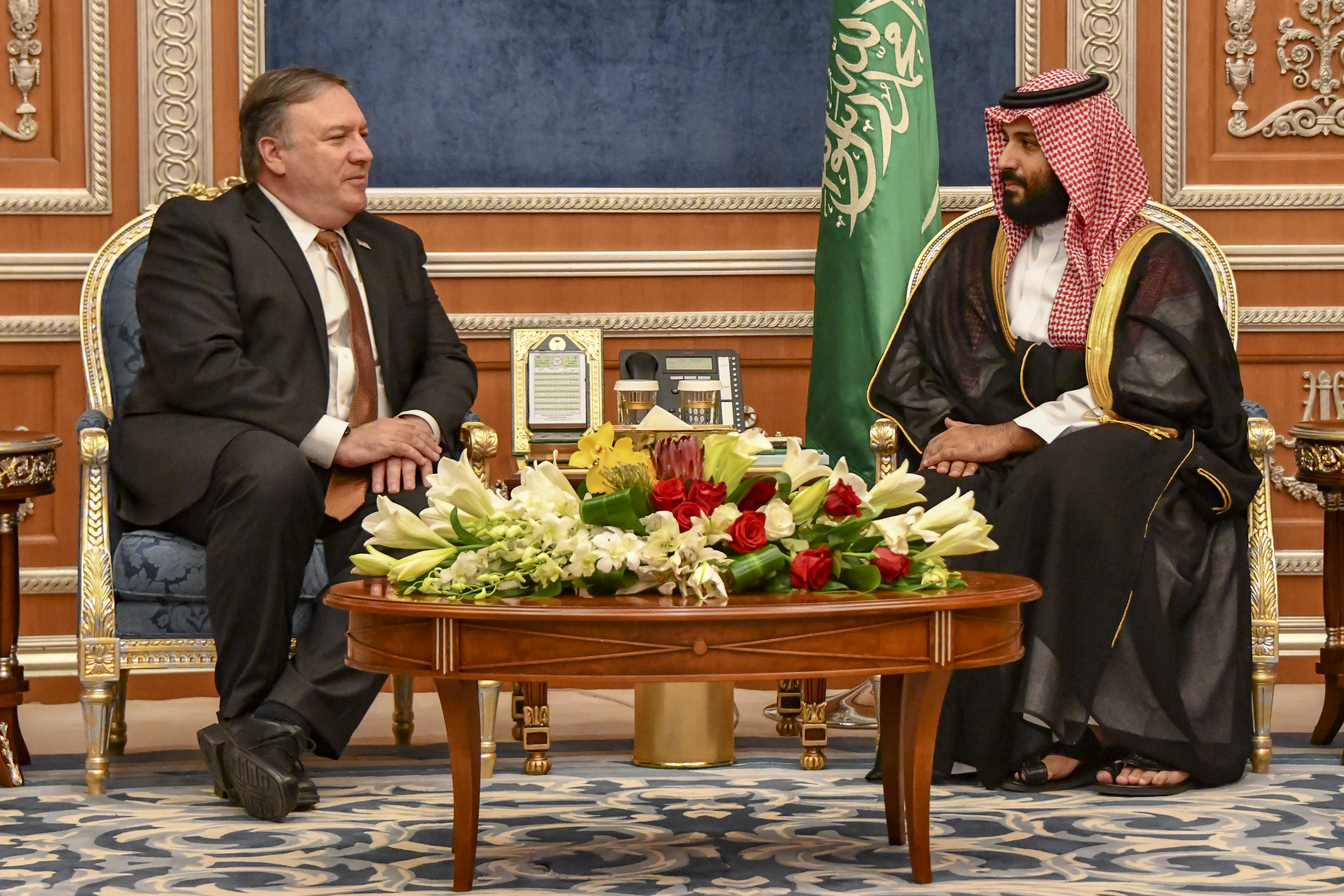 Plaintiffs in a class legal action against the USA contend that the Trump government was entered into a contract with other defendants to act as a whole to kill child civilians by military means for the purpose of terrorizing the Yemeni people into submission to governance by the defendants. 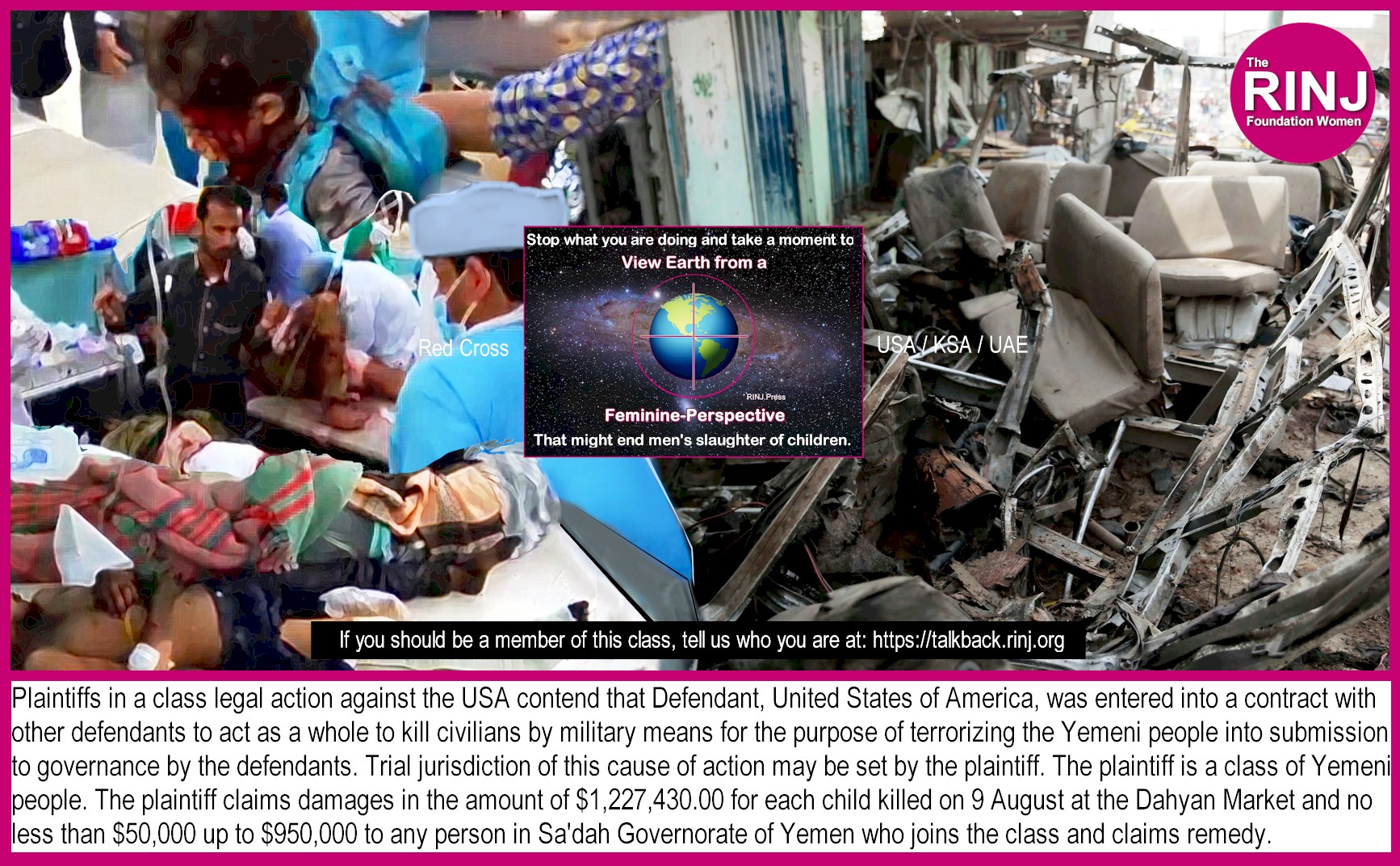 The Picture and its story: The plaintiff is a class of Yemeni people. The plaintiff claims damages in the amount of $1,227,430.00 for each child killed on 9 August at the Dahyan Market and no less than $50,000 up to $950,000 to any person in Sa’dah Governorate of Yemen who joins the class and claims remedy. Click image to enlarge. Photo Credit: Courtesy The RINJ Foundation. Art Credit: Rosa Yamamoto

It’s good for the world that China has been paying close attention to America or otherwise the recent aggressions that have emerged in the flailing reelection campaign of Donald Trump might have started a global war.

American Secretary of State Michael Pompeo has demanded  America’s allies triumph over the alleged threat of what he said was a new tyranny of China, a nation the USA has fallen behind in global diplomacy and trade.

From a country that sends invasive federal troops to attack citizens of American States that elected the Opposition, Pompeo says,  “Today China is increasingly authoritarian at home, and more aggressive in its hostility to freedom everywhere else,”last  Thursday at the Richard Nixon presidential library in Yorba Linda, California.

It’s hard to say what method of government would be best to manage a country of 1.4 billion people with over 50 significant ethnic minorities, but it is impossible to say that what China has doesn’t work. It not only is functional but has achieved nearly miraculous success.

Honored to have had the opportunity to visit @NixonLibrary in California and give remarks to reiterate the importance of the U.S. and the world addressing the threats posed by the Chinese Communist Party. Thanks to the team for your gracious hospitality. https://t.co/EP7OmWExDm. pic.twitter.com/PtaoC9Awoj

What “Free World” is Pompeo Talking About in his 1970’s style Cold War Rhetoric?

China for one has been sending more than a few Americans home. If the United States continues to make war on China, that country needs to expel all Americans at the five consular offices and the embassy in Beijing. Let’s face it, they are  all spies. And let’s all face the fact that things have plummeted to that level despite China’s courteous restraint.

Donald Trump, the con artist who took over the leaderless and fractured Republican Party in 2015-2016 makes one mistake after another when he appoints Cabinet members on the basis of their ability and willingness to be his  sycophants. They all seem to be fairly solid fascists, on side with Trump, but not so bright. Fascists are never bright, just maladjusted and functioning on repetitive patterns of behaviour..

Michael Pompeo, already the worst secretary of state in modern times, is of course a Trump “yes-man” and a peculiar cult member with Michael Pence to boot. Neither are qualifications for leading the CIA or becoming the US Secretary of State. 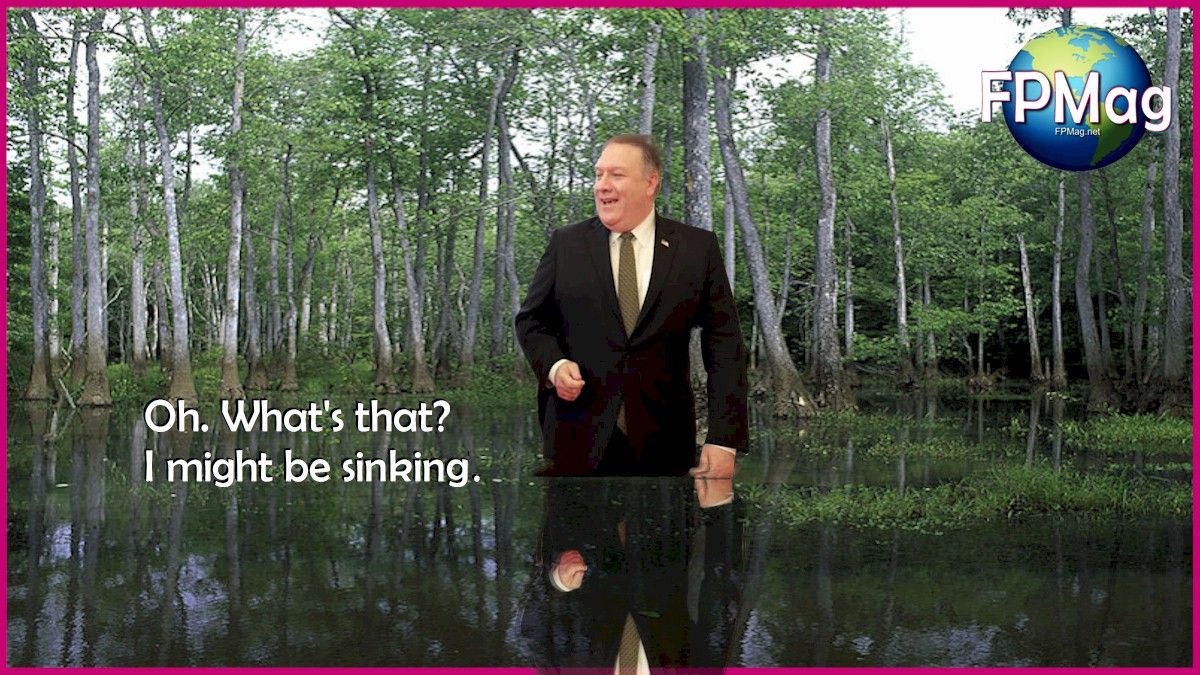 Once out of office the Trump Administration may have difficulty staying out of prison. File Photo. Michael Pompeo is implicated in lies, conspiracy to controvert the 2020 election and obstruction of justice.  Photo Art/Cropping/Enhancement: Rosa Yamamoto FPMag

These are the only two memorable achievements of Pompeo’s life and they were only achieved because Pompeo was one of the few persons willing to become a puppet of the incomprehensible buffoon Donald Trump, including predecessor Rex Tillerson who would go so far in pleasing Trump, and then headed in another direction and tried to actually do the job.

To please Trump is to fail as a government administrator. And don’t drink this Trump-kool-aid disinfectant as your career might die.

Being a Trump sycophant is indicative of having no real core values. Pompeo has called Trump a “kook,” a “cancer” and “a threat to democracy” before Pompeo whose career was bland wanted a post in Trump’s administration. Claiming to have crossed over from the Marco Rubio campaign, Pompeo swilled praise on Trump until he got the post of  C.I.A. director.  Suddenly Trump fired Secretary of State Rex Tillerson from his Twitter perch and Pompeo happily replaced Tillerson as one of Trump’s small echelon of butt-kissers, scraping whatever wealth they could find to their pockets and doing what they could to enhance their personal wealth and careers..

A two Dimensional Person is no Diplomat

Nobody can be too sure of what was Pompeo’s first blood but for sure there has been plenty of blood on the hands of Pompeo. Pompeo like Trump is a mass murderer.

Pompeo doesn’t even get along with his own people who are bringing actions against the Secretary through the Public Service Alliance for short shrifting families in the foreign USA services, of their medical insurance entitlements including that which is promised for special needs children. The closer one looks at the letters of these families the more despicable Pompeo looks.

Pompeo’s Bland Background with no Thrills

Michael Pompeo’s extraordinary lack of empathy made him a good Army soldier. The very best of combat soldiers love to kill and are easily diagnosed antisocial personality disordered.

Pompeo cannot read a room so when he talks he only pisses people off. Currently the United States is the most despised entity on the planet, and so it should be. America’s violations of human rights and crimes against humanity include its own people. Blacks in America are being slaughtered by a deliberately unattended infectious respiratory disease crisis that impacts non-Trump voters, the Black american communities. That’s hardly a coincidence. 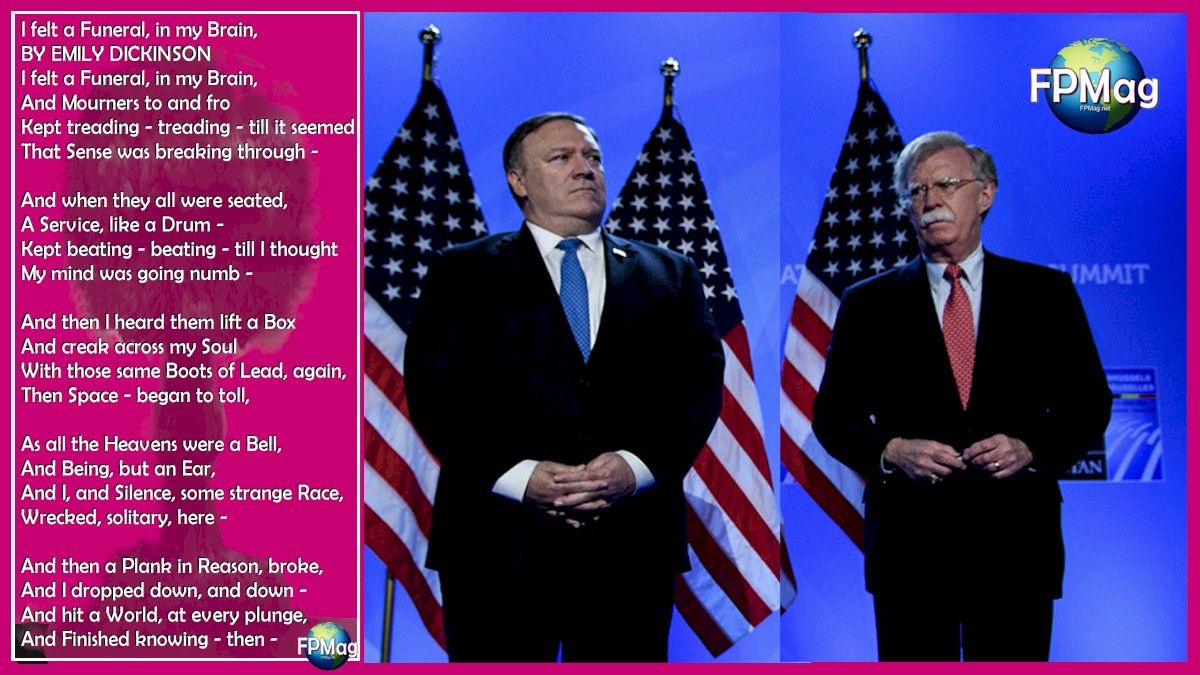 Michael Pompeo and John Bolton, accused of being fascist in tone and in behaviour. — I felt a Funeral, in my Brain, By Emily Dickinson I felt a Funeral, in my Brain, And Mourners to and fro Kept treading – treading – till it seemed That Sense was breaking through – And when they all were seated, A Service, like a Drum – Kept beating – beating – till I thought My mind was going numb – And then I heard them lift a Box And creak across my Soul With those same Boots of Lead, again, Then Space – began to toll, As all the Heavens were a Bell, And Being, but an Ear, And I, and Silence, some strange Race, Wrecked, solitary, here – And then a Plank in Reason, broke, And I dropped down, and down – And hit a World, at every plunge, And Finished knowing – then –

In the United States the phrase “Kill or Capture” usually means murder. An American Court ruled that the murder of Trayvon Martin was “OK”.

CNN talks about the mass murder of officials and some of their families in Baghdad as the justified assassination of Qasem Soleimani who was an Iranian major general in the Islamic Revolutionary Guard Corps and head of the Quds Force.

Soleimani’s  assassination effort delivered 12 deaths. At the same time in Yemen the same type of attack injured some Yemenis but killed nobody.

CNN doesn’t talk about that attack. Allegedly the USA  only backs Saudi Arabia and criminal Omar al-Bashir, leader of Sudan and part of the Coalition against Yemen.

America is officially not warring in Yemen, hence it could not have happened.

Of course that is not true, the US has had thousands of combatant personnel in Yemen working with al Qaeda and working independently. 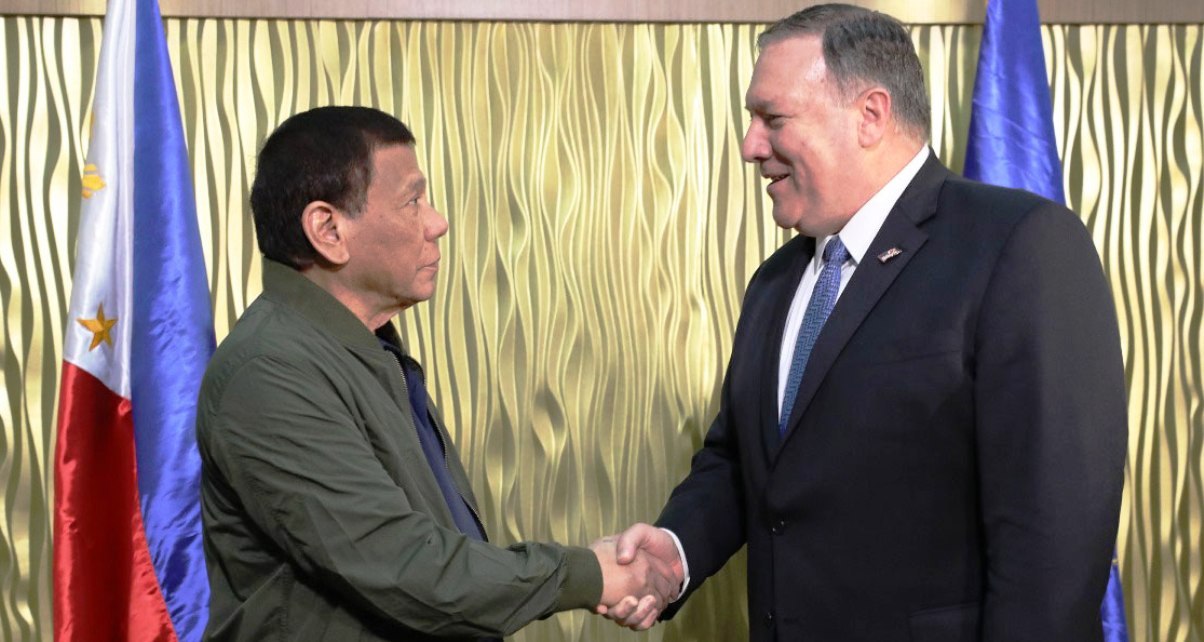 All of this is under the auspices of the United States Secretary of State.

Michael Pompeo is that Secretary and his ability and knowledge of diplomacy is equal to a fat, flatulent, belching warthog.

It does not take intelligence to be fascist and that’s what Pompeo is all about, fascism in the guise of democracy.

Pompeo’s every single press conference and news release has been the seed of entropy. Chaos. Every day Pompeo has another crisis which leads to another antagonistic foreign policy statement.

What has Pompeo Achieved?

Traveling around in Asia wearing white skin, one needs to specify not being an American and proving that fact before business can be conducted and relationships built. Pompeo and Trump have built for America a blend of hatred and pity that is unprecedented.

😱🤣 I see what you did there! pic.twitter.com/LVsUr7G7jQ