Don’t spill the oil, children. (Britain and the USA vs Iran)

They are like two bully boys roaming around the school yard at recess time with a pair of sling shots to hurt the kids they don’t like. They don’t care who else they hurt. They brutalized Chagossians, Iraqis, Iranians, Yemenis, and left over a million civilians dead and made refugees of ten millions. Their judgment is pitifully awful. 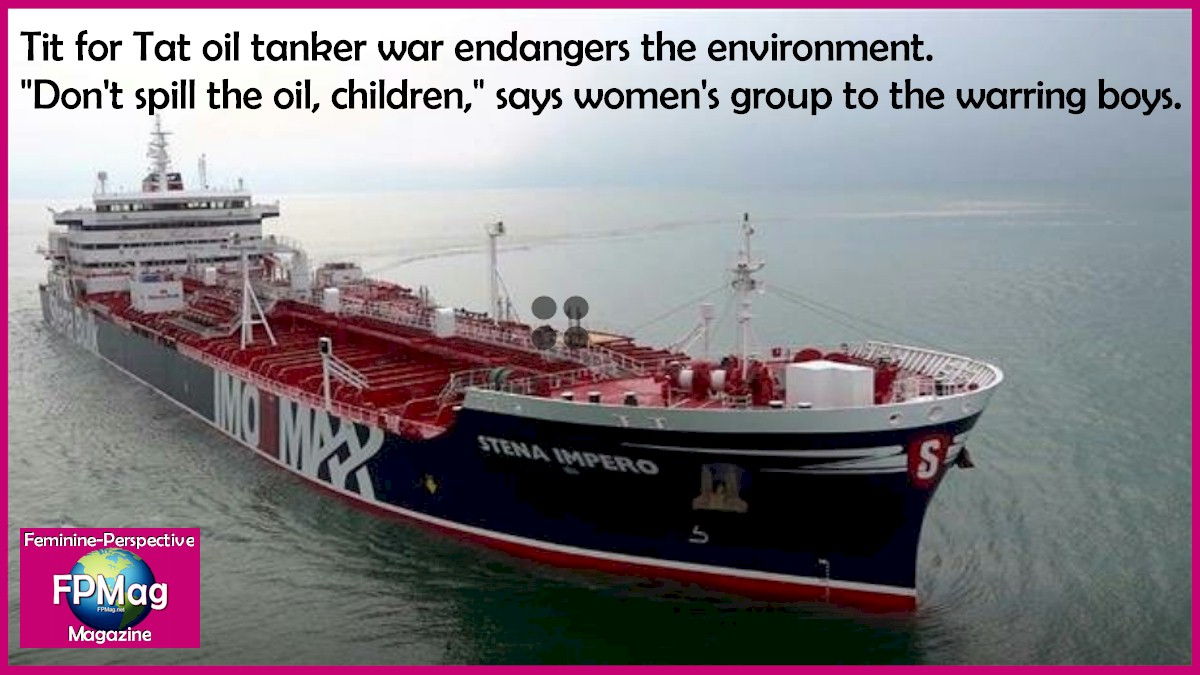 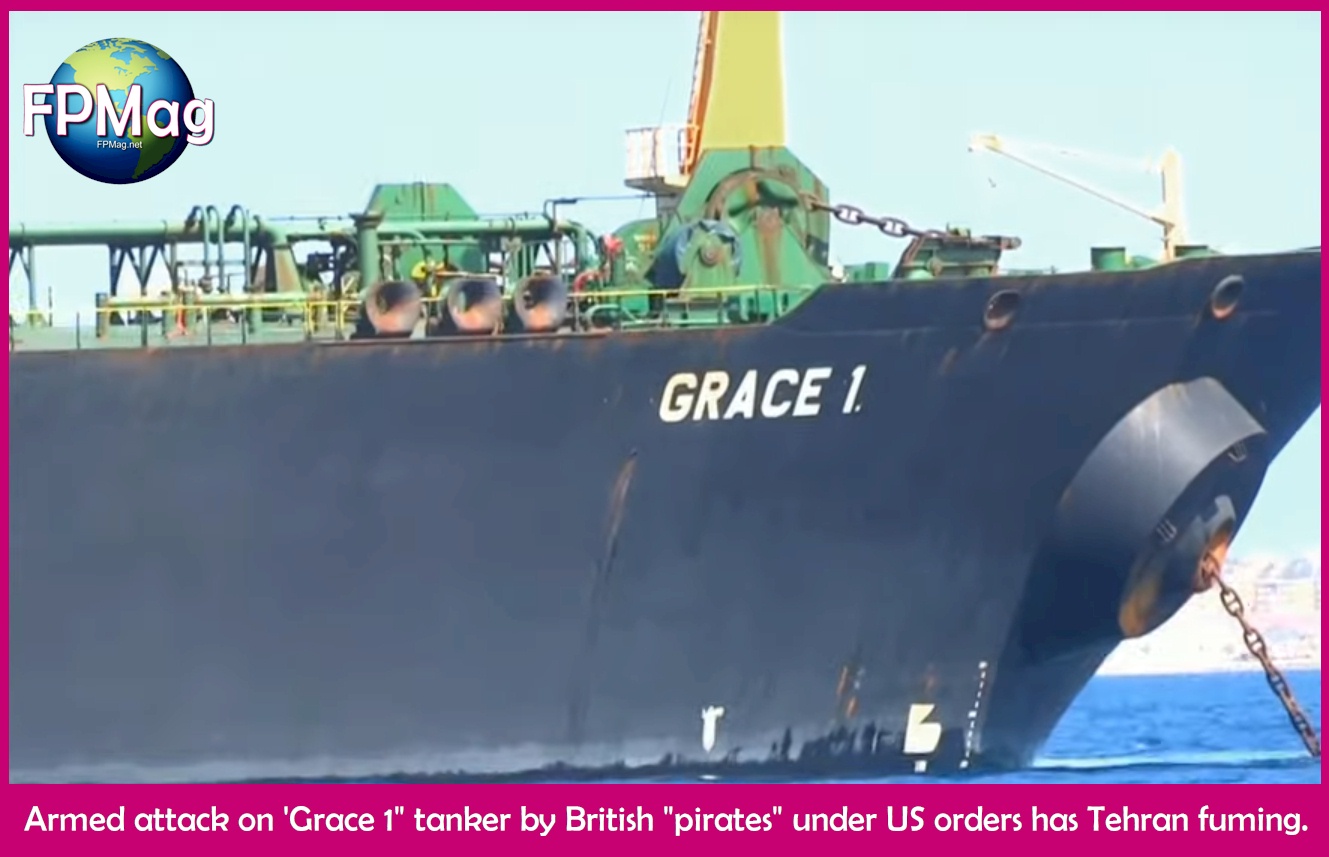 File photo: Grace 1 – Armed attack on ‘Grace 1″ tanker by British “pirates” under US orders has Tehran fuming. Tit for Tat oil tanker war has ensued since this event and it endangers the environment in the region.
“Don’t spill the oil, children,” says women’s group to the warring boys.

These bullies are America and Britain (the UK being the tag-along-wannabe to Biff The Bully). The two  are messing up far from home out of  sight from their constituents in the Persian Gulf, bullying Iran. In return, Iran is giving Britain a bloody nose, daily. Iran is also preparing for a nastier war. Britain looks hopeless. America is letting the UK take the blowback as it did to Canada.

Mother said, “Pick good friends.” Britain picked Donald Trump. Look what happened to Canada when it became an American surrogate and now takes the heat daily from China for kidnapping a Chinese princess. Morons! Canada’s Prime Minister is in the dog house and about to lose an election if the polls for November are accurate. Canada’s economy is taking a face-slap. Britain wants some of that?

The US goaded Britain into seizing an Iranian super tanker and now Britain is close to war with Iran, or perhaps it could be said that war has begun.

Michele Frances of the RINJ global women’s group spent some time as a nurse in the Middle East helping war survivors. Nurse Francis says humanitarians in the field are growing tired of cleaning up mess made by US/UK. “Don’t spill the oil,” she says while shaking her head.

Why Iran? Really? Why Iran? It has not offended anyone for years.

“It has a horrid patriarchal government like that of Saudi Arabia.” says Katie Alsop of the civil society women’s group.

“They are brutal to women and imprison everyone who speaks out against the totalitarian government. They punish homosexuality, ill attire, and they even execute children,” she added.

“But if the people don’t want that government, they should make a change,” notes Katie without being specific about ‘how’.

The people of Venezuela and Hong Kong are trying to make a difference. Maybe they will set a good example by having a good, peaceful outcome.

America Just Doesn’t Like Iran. It has no specifics, only its own propaganda.

America says that Iran is the global sponsor of terrorism but that is patently false.  America and Saudi Arabia are behind every terrorist attack since kingdom come. Even the 11 September 2001 attack on the Twin Towers was done by Saudi Arabians and paid for by America spending its money where it should not.

America says that Iran might try to build a nuclear bomb. But America has thousands of nuclear bombs.

Even the inspectors assigned to monitoring Iran’s adherence to the JCPOA say that Iran abides its undertakings.

Both Britain and the United States have antagonized Iran with economic warfare and military incursions into its space.

Consequently Iran acts annoyed and takes measured retaliatory actions. Both sides act like screwballs and neither side acts in the interests of their constituents, only testosterone-driven hysteria.

Is this all because neither Britain nor America have been invited to the bully-boy party in Syria where Vladimir Putin, Recep Erdogan and Bashar al Assad are controlling the bully-playground?

Syria:  Common maladies can lead to vulnerabilities and widespread disease. A civil war ended but the fragmentation caused a worse disease: many pathogens moved in to Syria’s lungs: Idlib.

What is happening today in the Middle East is proof that men cannot manage power without getting into scrapes. Now it’s a mess.

The Middle East is embroiled in conflict in every part. World War III is slowly getting rolling and that is why all this must stop!

The United Arab Emirates has come to realize this and is slowly backing out of the Coalition Killing Yemen (CKY).

All other nations should follow this UAE example. Go home and stop spending the people’s money on men’s guns and bombs and things that go “clank” in the night. Instead buy the population a treat, like clean water or good health care. Or toilets with toilet paper. And proper clothing. Girls should be wearing bathing suits in that heat, not Russian Siberia-wear.

Heed this warning, Britain and America

When a person catches a cold in their chest, an upper respiratory infection, the door is open to other pathogens due to certain imbalances and vulnerabilities

Catching a cold due to lack of care is like starting a conflict. You might control the initial events to some extent but the vulnerabilities and the exploitation of these weaknesses are potentially out of your control.

The article " Don’t spill the oil, children. (Britain and the USA vs Iran) " was written by Author: Micheal John (Biography, Email) Editor in Chief and Publisher of FPMag.
Contact Micheal John on Twitter ~ Facebook ~ LinkedIn ~ Instagram ~ Find on Wikipedia ~ Find on YouTube