Donald Trump is Popularizing Hatred, Racism, Misogyny and Violence because this is America.

Abuse of United Kingdom female politicians is rife online – and much of it is being directed by established far-right groups and figures, a BBC Newsnight investigation has found.

Donald Trump has joined a popular hatred-cult of misogyny and racism… or does he lead them and has he done that all his life? 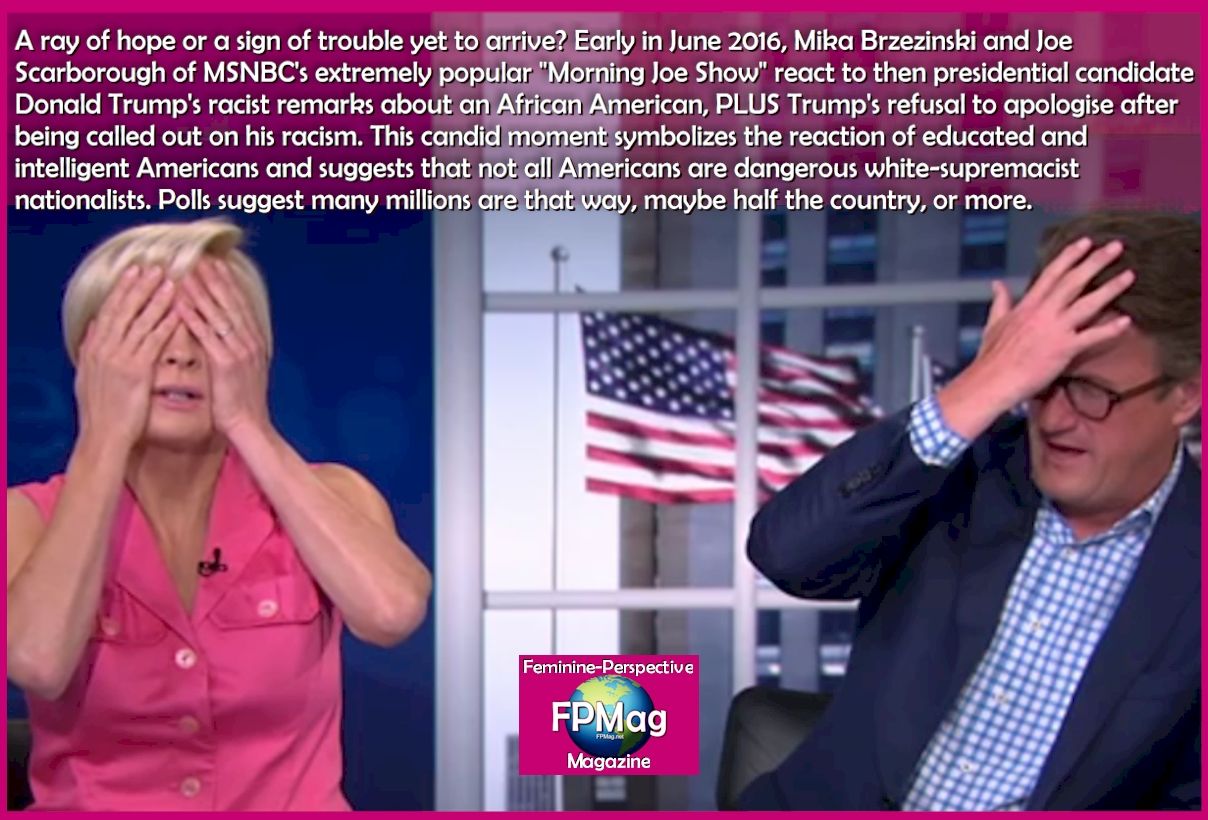 A ray of hope or a sign of trouble yet to arrive? Early in June 2016, Mika Brzezinski and Joe Scarborough of MSNBC’s extremely popular “Morning Joe Show” react to then presidential candidate Donald Trump’s racist remarks about an African American, PLUS Trump’s refusal to apologise after being called out on his racism. This candid moment symbolizes the reaction of educated and intelligent Americans and suggests that not all Americans are dangerous white-supremacist nationalists. Polls suggest many millions are that racist hiowever, maybe half the country, or more.
Photo Courtesy MSNBC Video Capture
Photo Art: Rosa Yamamoto FPMag

Donald Trump is Popularizing Hatred, Racism, Misogyny and Violence because this is America.

Yesterday the alleged sociopath in the White House Donald Trump was again tweeting racist comments at a notable group of high achievers. His target was the new young female politicians in the American Congress, including Ayanna Pressley of Massachusetts, Ilhan Omar of Minnesota, Alexandria Ocasio-Cortez of New York, and Rashida Tlaib of Michigan.

The psychiatric patient-type that American Psychiatrists say they have a compelling duty to warn about, and about whom Sigmund Freud said were dangerous and incurable, is a racist, a white supremacist, a rapist and a misogynist, on the evidence of his conduct throughout his life but most notably as the American President Russia and a group of white-supremacist nationalists elected.

Russia did the World a Favour helping Trump get Elected (FPMag knows what Russia did.) and expose the once unnoticed racist core values of America.

The U.S. Department of Justice once concluded that Arizona sheriff Joe Arpaio oversaw the “worst pattern of racial profiling in U.S. history”. The illegal tactics that Arpaio was using included, according to a DoJ written statement,  “extreme racial profiling and sadistic punishments that involved the torture, humiliation, and degradation of Latino inmates”.

The DoJ filed a law suit against Arpaio for unlawful discriminatory police conduct. Arpaio ignored the DoJ orders and was subsequently convicted of contempt of court for continuing to racially profile Hispanics.

Calling this sadistic racist “a great American patriot“, US President Trump, the sociopath who has seized control of the US White House, pardoned Arpaio soon after his conviction, even before sentencing took place.

The American Civil Liberties Union, which provided evidence in the case resulting in Arpaio’s conviction, tweeted: “By pardoning Joe Arpaio, Donald Trump has sent another disturbing signal to an emboldened white nationalist movement that this White House supports racism and bigotry.” 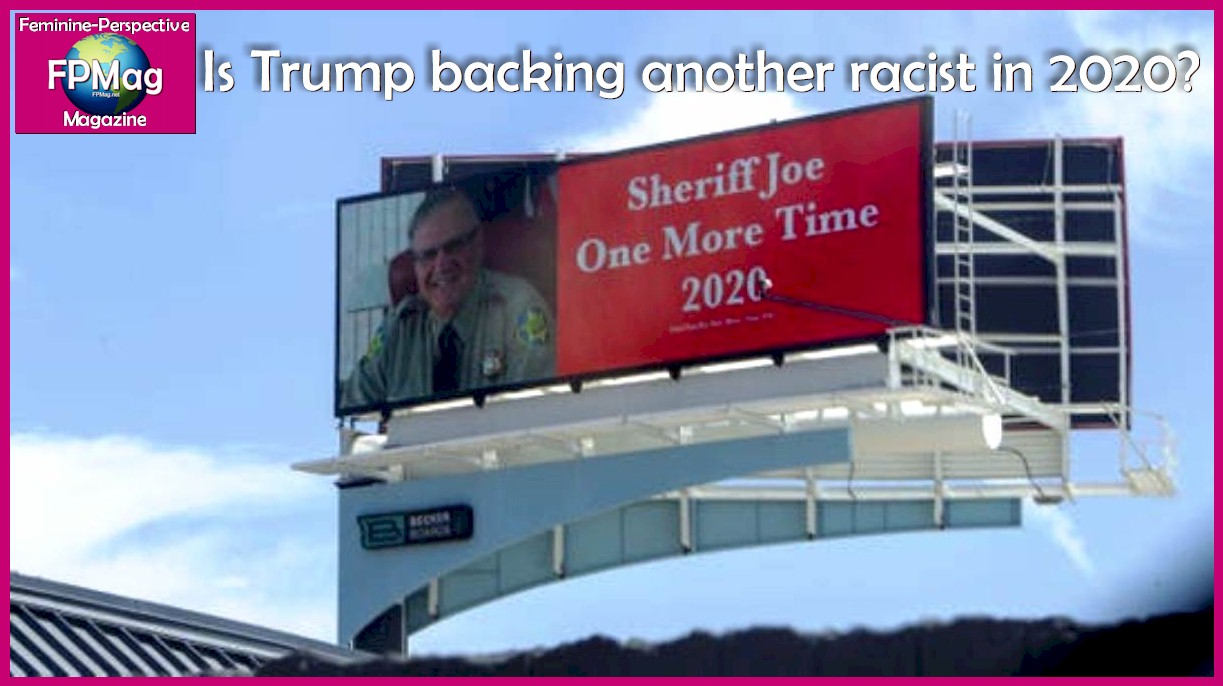 I defend President Trump on his immigration raids tomorrow. I plan on returning to my fight against crime and immigration. Stay tuned. 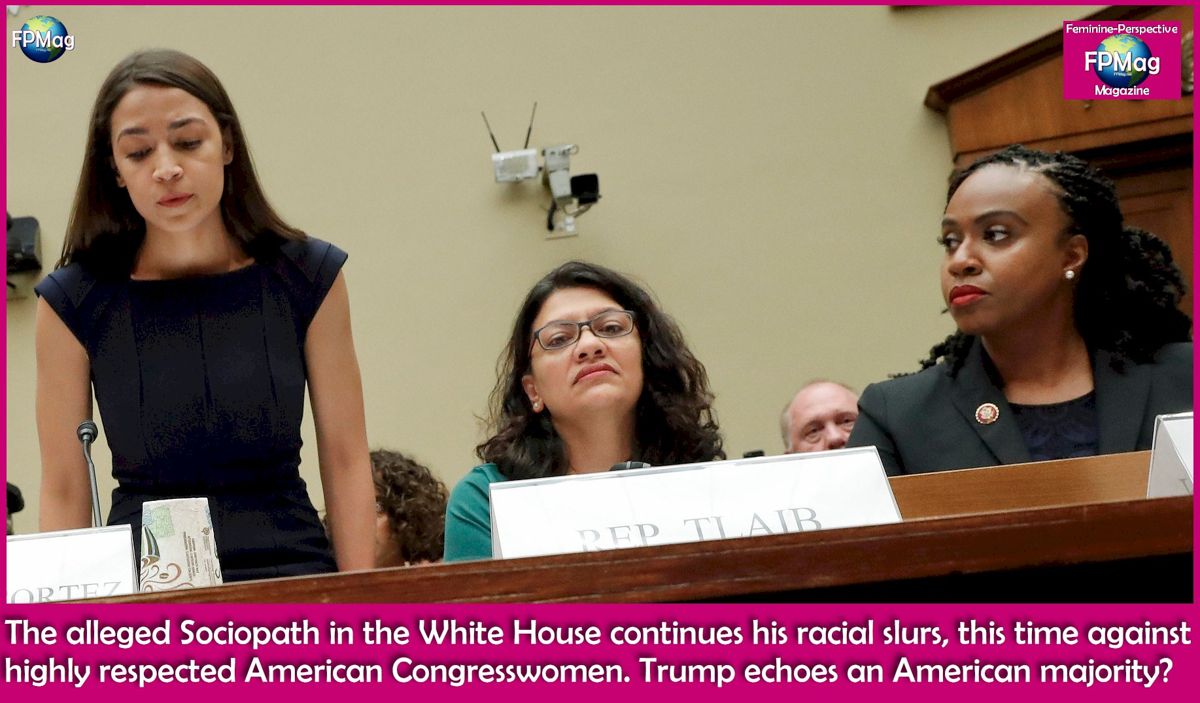 “So interesting to see ‘Progressive’ Democrat Congresswomen, who originally came from countries whose governments are a complete and total catastrophe, the worst, most corrupt and inept anywhere in the world (if they even have a functioning government at all), now loudly

“Why don’t they go back and help fix the totally broken and crime infested places from which they came. Then come back and show us how it is done.

“These places need your help badly, you can’t leave fast enough. I’m sure that Nancy Pelosi would be very happy to quickly work out free travel arrangements!” Donald Trump yesterday.

Theresa May, the UK Prime Minister, responded via a spokesperson saying, “The language used to refer to these women was completely unacceptable.”

What is more worrisome is that Trump has fed racial violence, misogyny and attacks on the press including the deaths of a group of journalists following one of his outbursts against the media.

Worse, if that is possible, shortly after Trump was inaugurated the ACLU reported a huge upswing in racial violence.

So interesting to see “Progressive” Democrat Congresswomen, who originally came from countries whose governments are a complete and total catastrophe, the worst, most corrupt and inept anywhere in the world (if they even have a functioning government at all), now loudly……

….it is done. These places need your help badly, you can’t leave fast enough. I’m sure that Nancy Pelosi would be very happy to quickly work out free travel arrangements!

Mr. President, the country I “come from,” & the country we all swear to, is the United States.

But given how you’ve destroyed our border with inhumane camps, all at a benefit to you & the corps who profit off them, you are absolutely right about the corruption laid at your feet. https://t.co/HLKQCotR8T

The article " Donald Trump is Popularizing Hatred, Racism, Misogyny and Violence because this is America. " was written by Author: Micheal John (Biography, Email) Editor in Chief and Publisher of FPMag.
Contact Micheal John on Twitter ~ Facebook ~ LinkedIn ~ Instagram ~ Find on Wikipedia ~ Find on YouTube