Ambassadors of 37 countries on Friday sent a joint letter to the President of the UN Human Rights Council and the UN High Commissioner for Human Rights to show their support for China on its “remarkable achievements in the field of human rights”.

“We commend China’s remarkable achievements in the field of human rights by adhering to the people-centered development philosophy and protecting and promoting human rights through development,” the joint letter said.

These are Muslim men, Uighurs, in what does not look like a ‘vocational school’ as Beijing claims dozens of camps to be.
Photo Credit: YouTube Screen Capture ~ Photo Art: Rosa Yamamoto FPMag

The photo and its story. Look. China’s remarkable achievements in the field of human rights?  Chinese Coast Guard and Chinese Militia navy is ripping away the livelihoods of Filipino and Vietnamese fishing folk, diverting or smashing their boats, dumping crew members into the sea and depriving families and communities from their normal food catch and livelihood.

Rodrigo Duterte’s Ambassador to the UN says the opposite by signing a contrarian memorandum which in a de facto sense is opposing Filipino human rights and supporting China’s violation of Filipino rights. 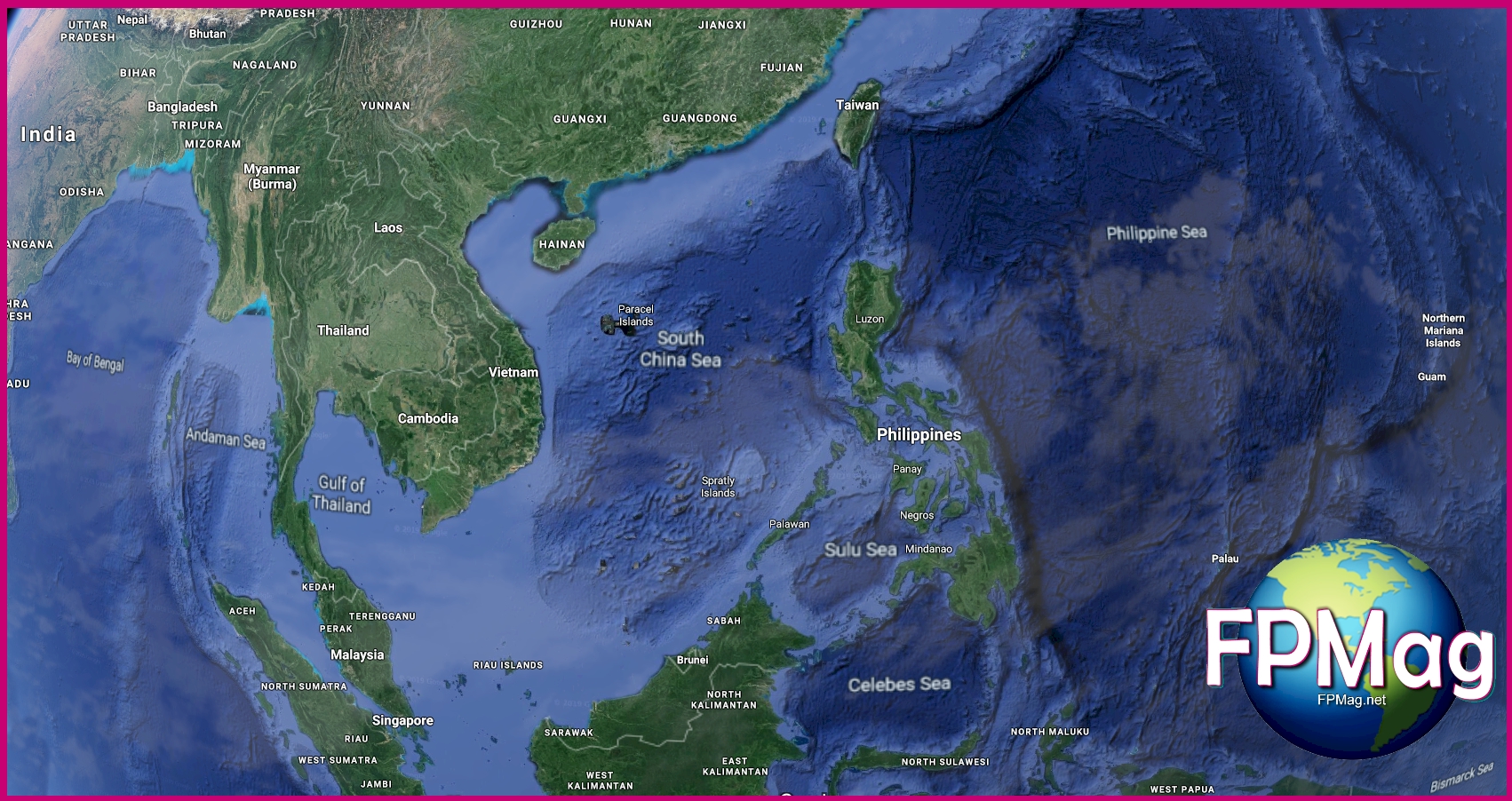 Click to enlarge and view the Spratly Islands in the Philippines Sea withing the waters of the Philippines. There is no possible way China could have sovereignty over islands faraway from China in the Philippines and Vietnam’s economic sovereignty zones. International Courts have ruled accordingly. China has sunk a Philippines fishing boat near there and left the sailors to drown. This is South China Sea where significant rights of all humans are being challenged by China. Most recently the livelihood of Filipino and Vietnamese fishermen and their families and communities was ripped away from them in violent encounters with China Militia, China Coast Guard and China’s Navy.  – Photo Credit: Google Maps
Photo Art: Rosa Yamamoto FPMag

“We also appreciate China’s contributions to the international human rights cause,” the group’s (over-the-top) letter to the President of the UN Human Rights Council  said.

The so-called ambassadors expressed their “firm opposition” to relevant countries’ practice of politicizing human rights issues, by naming and shaming, and publicly exerting pressures on other countries.

This rogue letter seems to have been inspired by a handful of nations which have protested up to 1 million Muslims or “Uighurs” who have been detained in Xinjiang, China.

These people are actually Turks who seem to be punished for being Turks. Thousands have fled the area and live in refugee camps in Thailand and elsewhere.

“This is a region of 11 million people who are all on lock down,” explained Professor McDougall who has been heading up a UN group that investigates racial discrimination.

“Uighurs are essentially Turkish people, and they live there right on the border,” Professor McDougall told FPMag.

Watch UN Expert : Wearing beards or eating Halal foods is enough to get you arrested in China.

Feminine-Perspective on this Red Flag Letter:

The Ambassadors to the UN in Geneva would be making an arguable point if they were referring to certain hypocrisy of some countries which criticize China’s human rights abuses.

Canada, for example, has repeatedly violated the human rights of its indigenous peoples to the point of their suffering atrocious health care disparities with the rest of the nation.

Governments come and go in normal democracies and new arrivals that overlook developed issues are due criticism and can benefit from constructive critique. Pointing out each nation’s shortcomings can be constructive and have a good result even if the complaints are circuitously reciprocating. But calling murder anything but murder is an atrocity of itself.

Muslims and Falun Gong practitioners in China are being slaughtered.

Besides being intellectually bankrupt, to condemn, “politicizing human rights issues, by naming and shaming”, is a red flag in the memorandum. This is maybe worthy of grade-eight students slamming each other in kids-only social media groups.

If these UN Ambassadors and their governments were sincere, they would know that any non-violent action to draw attention to human rights issues is valid and commendable.

And consider that no amount of effort of any kind including “politicizing human rights issues, by naming and shaming,” has brought justice for victims.

The fact of these nations issuing such a letter, complaining about “politicizing human rights issues, by naming and shaming” and condoning the severe abuse of Muslims and Falun Gong members in China condemns the signatories as violators themselves.

One must do anything, whatever it takes, to stop human rights violations. No person who does not understand this or abide should be an ambassador to our, the people’s, United Nations.

Every person on Earth has the fiduciary responsibility to stand against violation of the human rights of any other person. They have the right to interfere and prevent harm to another person and to avail any measure of force of word or action commensurate with the threat. That would surely include “politicizing human rights issues, by naming and shaming”.

These signatories are not representing people at the UN. They represent human rights violators without exception. The People should demand these ambassadors to the UN at Geneva, who signed this absurd human-rights violating missive, be banned from any further UN participation because of this outright betrayal of those they should have been representing.

These scurrilous and fraudulent ambassadors of the people of their nations to the UN are everything that brings complaint and disrepute to the United Nations.

The letter said: “We urge the OHCHR, Treaty Bodies and relevant Special Procedures mandate holders to conduct their work in an objective and impartial manner according to their mandate and with true and genuinely credible information, and value the communication with member states.”

Among the women in China who are members of the global women’s group, The RINJ Foundation, are a small group in the North and in Beijing who are shedding light on disappearances of persons and entire families. Questions and answers back and forth over the past four months have yielded little.

These same women witnesses claim that the Chinese government in Beijing has arrested without warrant but as an act of racial discrimination more than a million Muslims out of about 11 million in the Uighur portion of Xinjiang, and interned them in some form of alleged re-education camps that some Chinese officials have dubbed “Vocational Schools”.

What the women have described in messages sounds like brainwashing centers intended to rid the culture and religious beliefs of Uighur. That may not be true.  FPMag will not know until given unfettered access.

Because China does not allow neither international inspectors nor journalists to enter these camps, there is a shroud of concerned, legitimate, doubt to the benign story about voluntary vocational training. There are also too many forced disappearances to make this incredulous story believable. This is happening in Uighur, a predominantly Turkic speaking group from China’s northwestern province of Xinjiang.

Some Chinese officials have conjectured that preventing terrorism is the goal of these operations.

Chinese government officials in Beijing have responded to questions about the detained Uighurs saying that what they call vocational training centers do not infringe on the Uighurs’ human rights.

China’s government slam the door shut at that point and prevents even the slightest transparency of these “vocational training” operations.

That is anything but a  “contribution to the international human rights cause”.

The article " Among Human Rights Violations is the Letter to UNHCHR on China by HR Violator Nations [In Depth] " was written by Author: Micheal John OBrien (Biography, Email) Editor in Chief
Contact Micheal John OBrien on Twitter ~ Facebook ~ LinkedIn ~ Instagram ~ Find on Wikipedia ~ Find on YouTube