2019-nCoV Update: At 12:46 a.m. UTC on 31 January 2020, approximately 9,817 cases have been confirmed as well as 214 deaths.  An emergency meeting of the World Health Organization (WHO) has declared the outbreak a Public Health Emergency of International Concern (PHEIC) and has asked all countries to exercise measures for containment, including active surveillance, early detection, isolation and case management, contact tracing and prevention of onward spread of 2019-nCoV infection, and to share full data with WHO.  Including China, 22 countries have reported confirmed cases. Several countries report secondary local transmissions.

Exhausted medical professionals across Asia have their heads turning this way and that. It’s cold-and-flu season and it is a very bad flu season. Thousands will die. Also taxing medical resources, the symptoms of flu can trigger the need for a novel coronavirus test, when lower  respiratory symptoms indicate.

FPMag reporters and correspondents  have observed that for most of South Asia, there are no numbers of infections available, but they are in the millions of infections. This is making China’s crisis unbearable because most people with influenza-like symptoms are reporting to medical facilities, causing enormous lineups, looking for a 2019nCoV test.

In the United States alone, which has not been distracted by a coronavirus outbreak, “as of January 18, 2020, there have been 15 million cases of flu, 140,000 hospitalizations, and 8200 deaths in the US this influenza season,” reports the US Centers for Disease Control and Prevention (CDC).

“There may be  as many as 646,000 influenza deaths around the world,” said a CDC report last December.

Note: The author of this article volunteered his practice as a psychologist, counseling families and patients in Barrie, Ontario, Canada and in Toronto during the 2002 SARS crisis which killed 44 Canadians. He has a great compassion for those families impacted by the worst coronaviruses.

Meanwhile, an emergency meeting of the World Health Organization (WHO) has been called for today to decide if the coronavirus outbreak constitutes an international emergency. WHO has already released a statement that said it “regrets” previously calling the virus risk “moderate.” It is a high risk pathogen.

On Tuesday,  WHO Director-General Tedros Adhanom Ghebreyesus met with China’s President Xi Jinping to discuss a wide range of details about the 2019-nCoV, a new coronavirus crisis that may have some similarities to the SARS crisis in which a unique coronavirus killed 44 Canadians in 2002/2003.

“The 2019-nCoV is an outbreak in Wuhan City that has infected thousands of Chinese and while having killed many, it so far does not seem to have the same morbidity level as did the SARS virus,” notes nurse Michele Francis of the RINJ Foundation.

What has alarmed, Dr. Tedros Adhanom Ghebreyesus, he said on the weekend, is that infected persons in some of the other 15 countries have themselves infected locals who have never been in China, which means the virus is spreading freely from human to human well beyond the initially infected population. 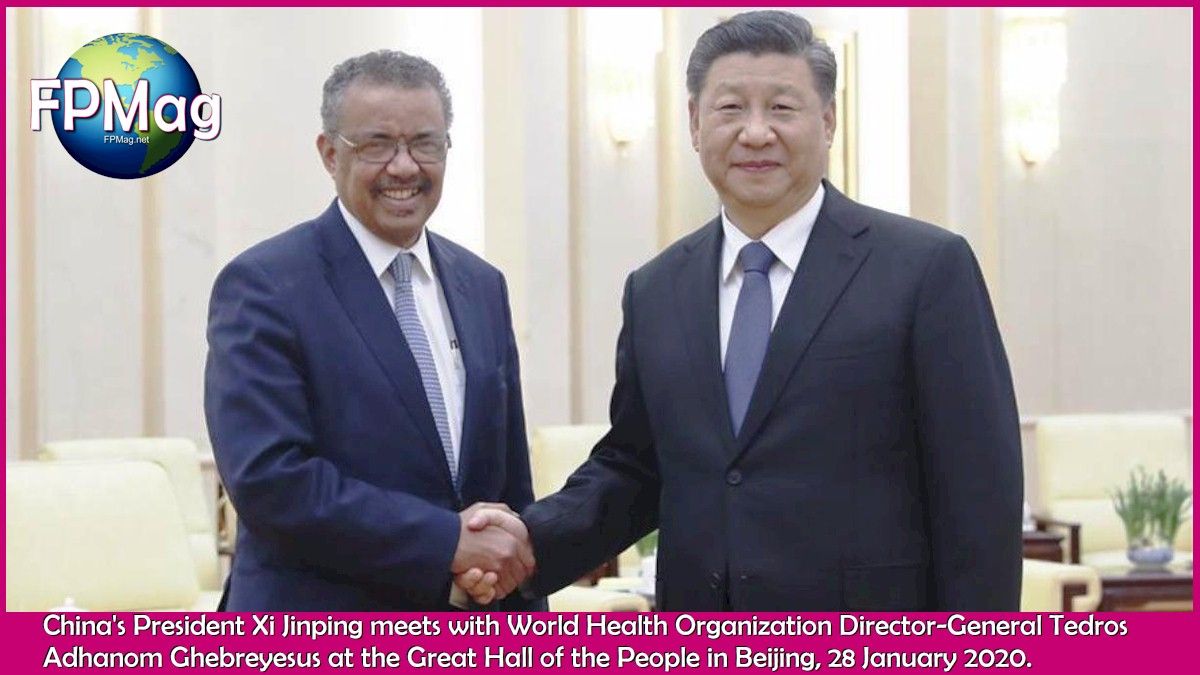 The photo and its story: China’s President Xi Jinping meets with World Health Organization Director-General Tedros Adhanom Ghebreyesus at the Great Hall of the People in Beijing, 28 January 2020. Chinese President Xi Jinping said Tuesday that China has full confidence and capability to win the battle against the outbreak of pneumonia caused by the novel coronavirus (2019-nCoV).

Xi made the remarks when meeting with visiting World Health Organization (WHO) Director-General Tedros Adhanom Ghebreyesus at the Great Hall of the People in Beijing.

“The WHO is welcome to participate in the epidemic containment,” Xi Jinping said on Tuesday, adding that “WHO experts have visited Wuhan in central China where the virus first broke out”.

“China is ready to work with the WHO as well as the international community to safeguard regional and global public health security,” Xi said.

Xi said he believes that the “WHO and the international community will assess the epidemic situation in an objective, just, calm and reasonable way.”

“The two sides agreed that WHO will send international experts to visit China as soon as possible to work with Chinese counterparts on increasing understanding of the outbreak to guide global response efforts,” reports the World Health Organizaton in a statement released yesterday.

“Stopping the spread of this virus both in China and globally is WHO’s highest priority,” said Dr Tedros.

“We appreciate the seriousness with which China is taking this outbreak, especially the commitment from top leadership, and the transparency they have demonstrated, including sharing data and genetic sequence of the virus. WHO is working closely with the government on measures to understand the virus and limit transmission. WHO will keep working side-by-side with China and all other countries to protect health and keep people safe.”

In a surprising move, Xi Jinping has taken a very ‘Fatherly‘  and hands-on Approach to the Crisis

Early in January,  Chinese health authorities posted the full genome of the 2019-nCoV in GenBank, the US NIH genetic sequence database, and in the Global Initiative on Sharing All Influenza Data (GISAID) portal. This has allowed global medical authorities to set a test criteria for each nations’ citizens. Some 14 or more countries at the time of publication report having patients who are infected. That number will change in the hours and days ahead.

Speaking to colleagues in Nigeria, South America, Europe, Hong Kong and in China before answering FPMag‘s questions, Katie Alsop of the RINJ Foundation noted that specialists in the field of communicable disease outbreaks have “a million questions” and “this time, they are getting answers from Chinese authorities and also a concomitantly better response from the WHO, which is also getting better data from Chinese officials.”

As FPMag reported previously, correspondents in China have reported there are massive efforts underway to build two hospitals.

“The government of China has pulled out all the stops,” says a surgeon in Wuhan who left his family in Shanghai, China to come to Wuhan and help his colleagues. He is a former graduate of what was once known as the Wuhan  Medical College, and is still connected to his professional colleagues in the troubled city of 11 million people.

FPMag has seen the first hospital today, which has a massive foundation structure of concrete and steel already completed and an outer array of department offices and laboratories as well as patient care intake and isolation rooms. The facility will be able to handle up to 1000 or more patients in early February. A second facility is also underway which FPMag did not have time to visit but saw from a distance. It is also progressing well and will handle about 1500 patients.

The two new facilities will be dedicated to the outbreak patients.

Mixed Reaction around the World

Alarmingly, American-owned Google and Facebook have been blocking on their sites, serious reports and conversations about the emergency in China and the high risk status of the global spread of the temporarily named “2019-nCov” coronavirus.

Meanwhile, the American Center for Disease Control has taken a different and more neutral approach to the “2019-nCov” coronavirus which has infected a number of Americans in the United States.

Numerous myths about the novel coronavirus have spread around the world in social media, probably as a result of people just not knowing and of course because of the current antipathy toward China during a trade war and a militarized technology war between the United States and China.

Many Chinese are dying and as thousands more are contracting the “2019-nCov” illness which in roughly 20% of cases produces a pneumonia that makes breathing difficult and causes pulmonary events that are life threatening, the nation’s attentions are being distracted by US military activities in the South China sea.

Exploiting the coronavirus outbreak in China, which has impacted every province of China, the United States has been conducting freedom of navigation activities with warships poking into the contested Chinese island waters in the South China Sea and in the territorial waters of the Philippines and other countries.

All of Asia is impacted by the “2019-nCov” outbreak. These American warship activities by the Americans have not been well received by either China or the Philippines, the latter threatening to withdraw itself from one of its military treaties with the United States for this and other reasons.

As the world waits for the outcome of the WHO Emergency Meeting, “Many 2019-nCov Patients in China are having good outcomes,” report doctors. 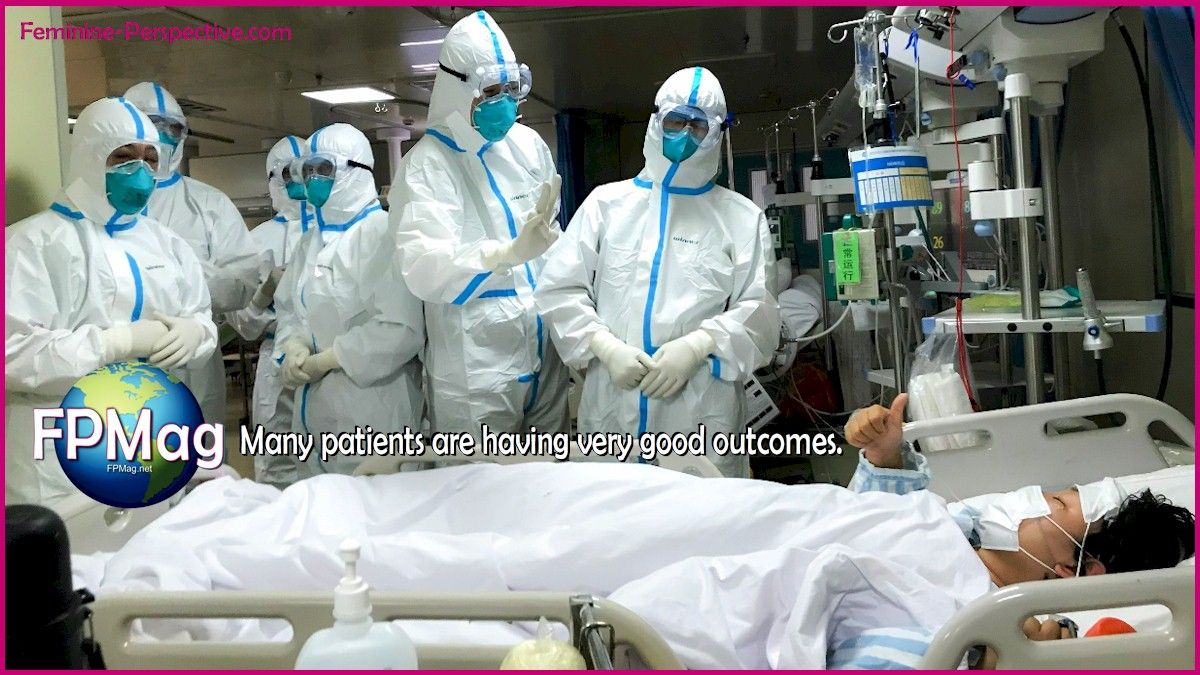 Civil Society Group and its partners step up and ask Xi Jinping, “How Can we Help”

“2019nCoV, The “Wuhan CoronaVirus” may be spreading around the world, but so too is love for our Chinese brothers and sisters and a firm resolve to kill this virus,” says Michele Francis, a nurse practitioner of the RINJ Foundation, a global civil society group of humanitarians.

“Rosa Yamamoto FPMag‘s Art Director has been volunteering with a few of the executives from the RINJ Women group trying to get out a message to the women of the world and build a support group to help each other. Their theme is “Simplicity”.

A global civil society women’s group is pleading to women around the world to join together as one and beat this new coronavirus, in China, and around the globe. Click the image to link to their message. Image courtesy of The RINJ Foundation 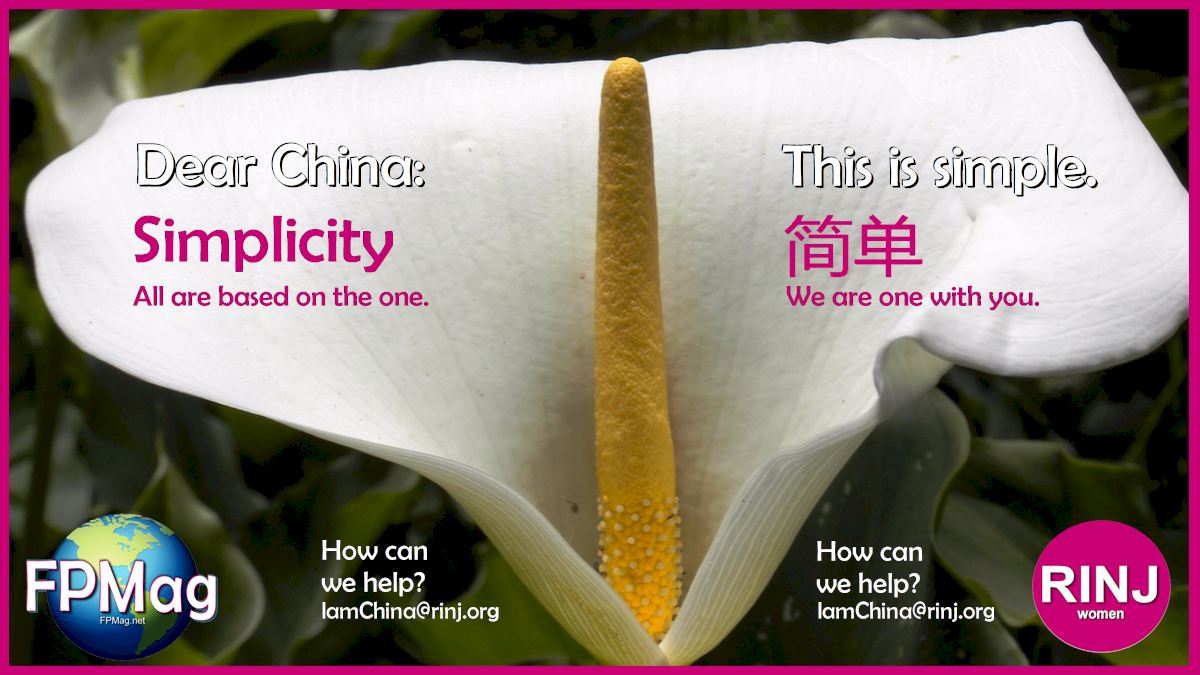 Dear China:
This is simple. Like this simple flower, all are based on the one.
Simplicity = We are one with you.
How can we help?
wearechina@therinjfoundation.org
iamchina@rinj.org
The RINJ Women from all around the world, in every country, are saying with love, “We Are China.” (More will Join. Yes. More will Join. )
How can we help?
We agree: “The epidemic is a devil. We will not let it hide.”

Artwork Courtesy of the RINJ Foundation.