Sheroes of 2019: VOICE of WOMEN is a political prisoner.

Her strength and decisiveness in the face of swirling misogyny and difficult times makes Jacinda Ardern a 2019 Shero. 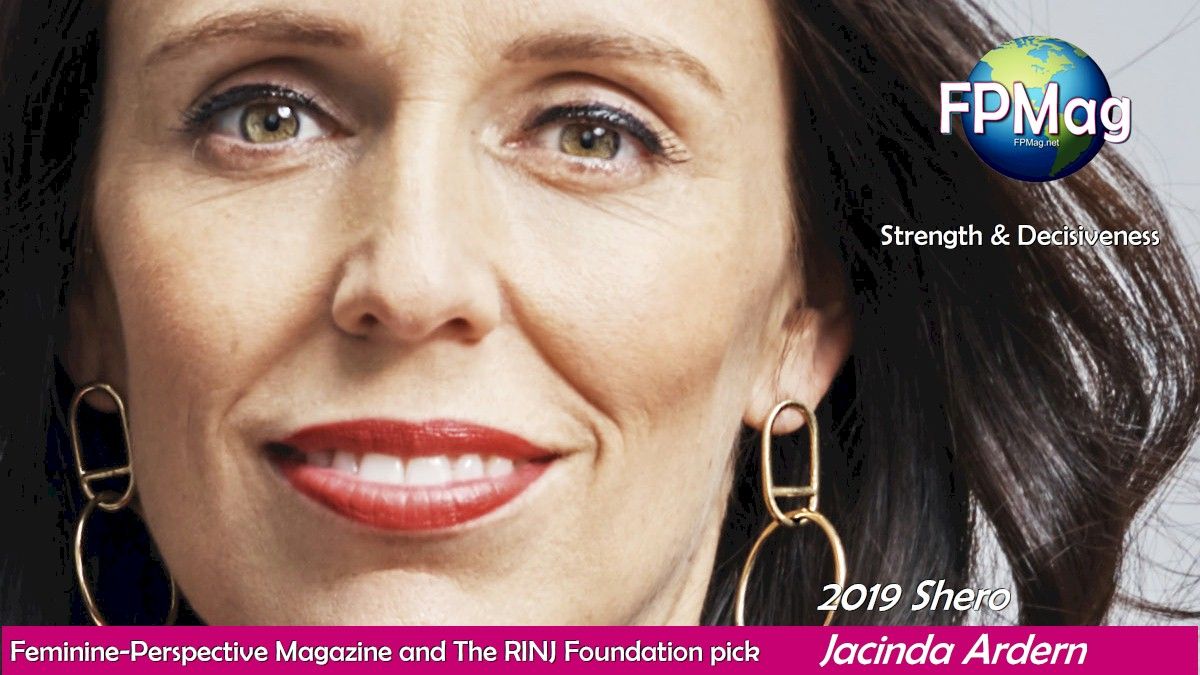 In New Zealand, Prime Minister Jacinda Ardern has been dubbed a “show pony” by her misogynist detractors who set into motion a hundred people led by a woman-hating bricklayer named Colin Wilson who thinks Ardern is too much eye candy to be a Prime Minister.

The ad hoc social media cultist calls his campaign ‘TurnArdern’ and wants a moment of fame by leading his social media followers to rush into magazine stands and turn over the magazines that feature The Story Behind an Extraordinary Leader.

The Story Behind an Extraordinary Leader is an independent biography (independent means Jacinda Ardern was not interviewed and the book’s material comes from independent authenticated sources researched by a well-respected journalist, Michelle Duff) of the 2019 Shero, Jacinda Ardern.

The Voice of Reason is a Political Prisoner. Her now solitary outspoken voice in opposition to the Duterte Death Squads is why Senator Leila de Lima is an unprecedented, exceptional RINJ Shero four years in a row.

Philippines Senator Leila de Lima, elected in 2016, is still held in prison in Manila for her criticisms of the Philippines’ women-hating, murderous Tin-Pot-Dictator. 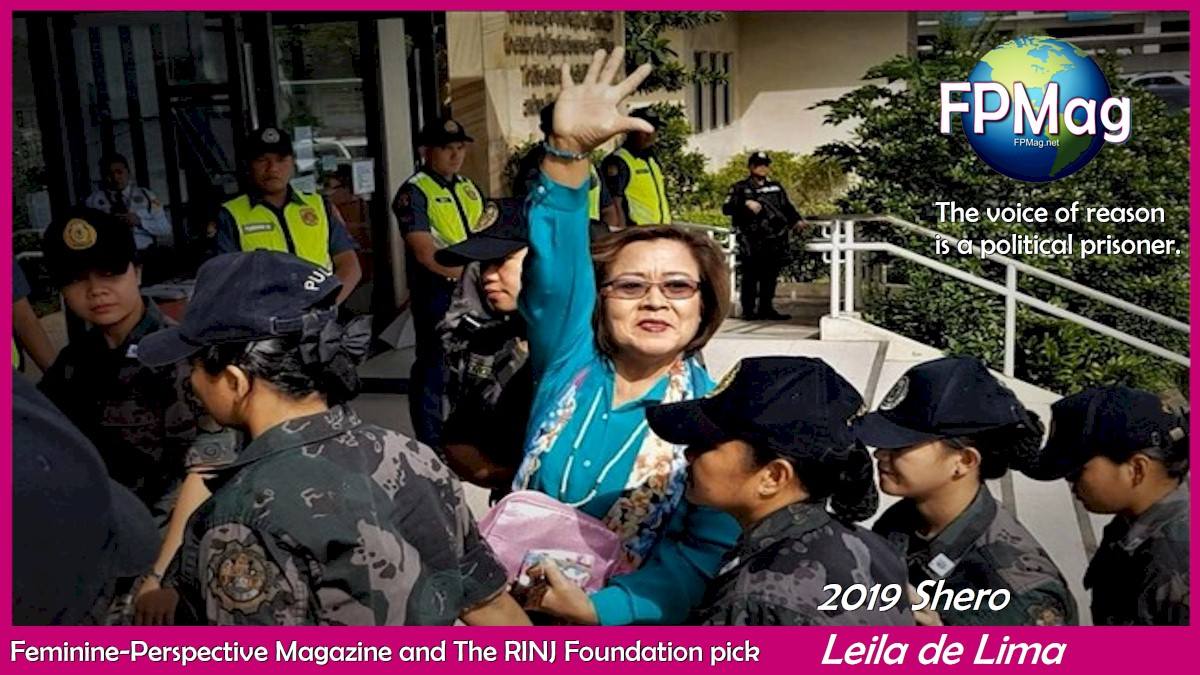 For the fourth year in a row. Philippines Senator Leila Norma Eulalia Josefa Magistrado de Lima is a political prisoner and has been since 24 February of 2017.

The extraordinary Shero de Lima is a Philippines elected Senator, lawyer, law professor, and human rights activist who has been critical of Philippines authoritarian leader Rodrigo Duterte for two decades for his admitted crimes of  murder, alleged crimes against humanity (now in a complaint before the ICC) and alleged genocide as Mayor of Davao and President of the Philippines.

Shero Leila de Lima now in the midst of another controversy in which American Human Rights Defender Lawmakers have levied sanctions against those who imprisoned Dr. de Lima

Duterte and other Philippines officials could possibly be banned from entry into the United States at the discretion of the US Secretary of State. Sources to FPMag say that “Philippines President Duterte has already been invited to the White House and therefore it is unlikely that US Secretary of State Michael Pompeo would exercise the option of banning his entry.”

Nevertheless, while extremely unlikely (according to informed sources plus historical data) under Trump, it is also possible at the discretion of the US Secretary of State that based on a determination in the 2020 US Federal Budget under the Global Magnitsky Human Rights Accountability Act, that “foreign government officials about whom the Secretary [Pompeo]  has credible information have been involved in the wrongful imprisonment” of [several persons, including] Leila de Lima, may have their US-based assets frozen.

Duterte and at least a dozen of his henchmen has been accused of rape, accused of victim shaming and creating a rape culture; accused of sexual assault, murder, torture and other crimes against humanity by even his own Davao Death Squad members who lost their stomach for Duterte’s violence.

“Look at this image and look closely. These are children whom Duterte has caused to be murdered. Duterte has personally called them, ‘collateral damage,'” says Katie Alsop.

The RINJ women’s group director has shared an emotional plea to release Senator Leila de Lima and to stop the state-sponsored killing of children and their families. Photo credit: Source Supplied

Activists say at least 27,000 people have been killed since Philippines’ President Rodrigo Duterte came to power in 2016.

Now the UN is preparing to demand an investigation into extrajudicial killings during his “war on drugs”.

These are the country’s death squads: pic.twitter.com/dD59RDJe1U

More → Read: The VOICE of WOMEN is a political prisoner.

Video: These are the types of murders shero Senator Leila de Lima has protested and for which protest she was persecuted by political imprisonment.

This Shero is a Patriot.

Nancy Pelosi is the highest-ranking elected female official in United States history. She is the recipient of unrelenting and vicious abuse from the US Misogynist President Donald Trump 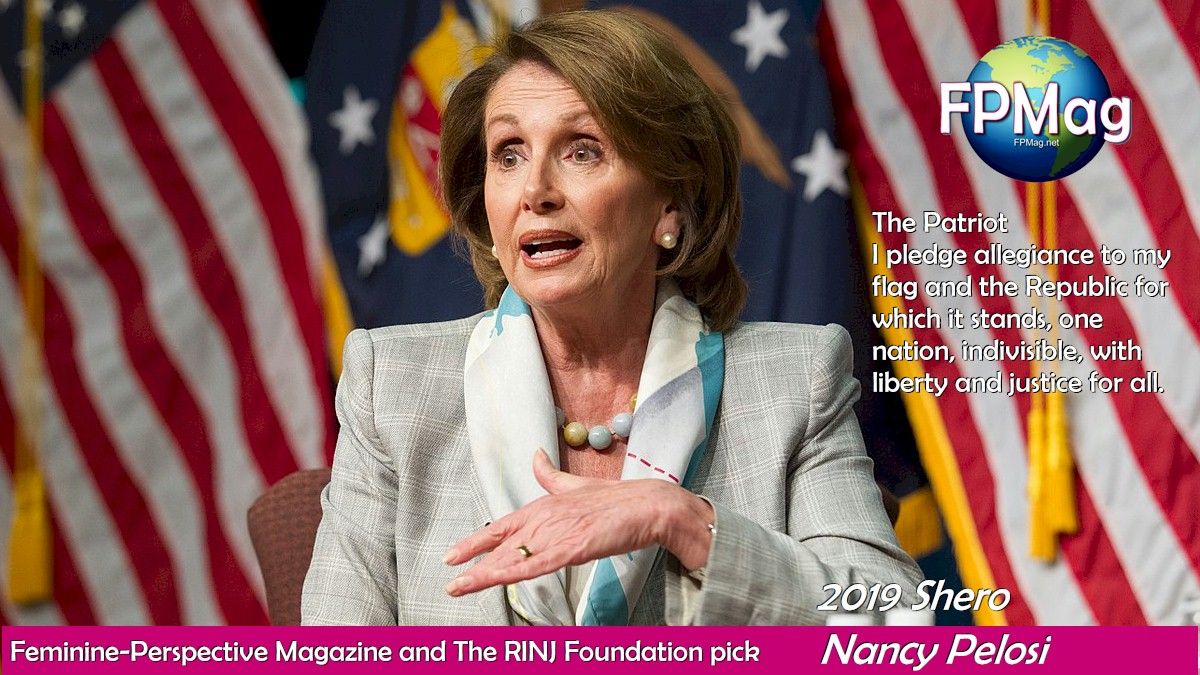 The 52nd Speaker of the United States House of Representatives is Nancy Pelosi. She is a true American Patriot who loves her country and its people in concert with her private devotion to her beloved Catholic Church. Nancy Pelosi is the quintessential American Patriot. Photo Credit: Public Domain Photo Art/Cropping: Rosa Yamamoto FPMag

Nancy Pelosi has served her constituents in the last three decades following 17 consecutive electoral wins in what is today known as the 12th Congressional District of California.

Speaker Pelosi also substantially revised the United States, Mexico and Canada trade agreement to the advantage of all parties.

The article " Sheroes of 2019: VOICE of WOMEN is a political prisoner. " was written by Author: Melissa Hemingway (Biography, Email) Senior Staff Writer and Associate Editor at Large
Contact Melissa Hemingway on Twitter ~ Facebook ~ Find on YouTube