A global civil society group  in Special Consultative Status with the UN Economic and Social Council since 2017 has advanced a peace proposal to the Secretary General of the United nations and to “the parties of the 3 January EJK matter in the city of Baghdad“.

“The missive is straightforward,” says Michele Francis, a director of the global women’s civil society group. “We fear the colossal impact to the safety of women and their families around the world as a result of a series of war measures by the United States and its Extra Judicial Killings (EJK) that impact dozens of families in Iran and Iraq,” she added. “Colossal missteps of the US Pentagon clearly comprise monstrous breaches of international law and immeasurable cost in damages,” [Referring to the matter of the “sudden deaths of the (list of deceased)  at 33°15′29″N 44°15′22″E on or about 3 January 2020 1 a.m. local], she added.

The missive cites reports of global mourning in the Islamic communities around the world. “Some of the antipathy comes from nuclear armed nations,” notes the document. 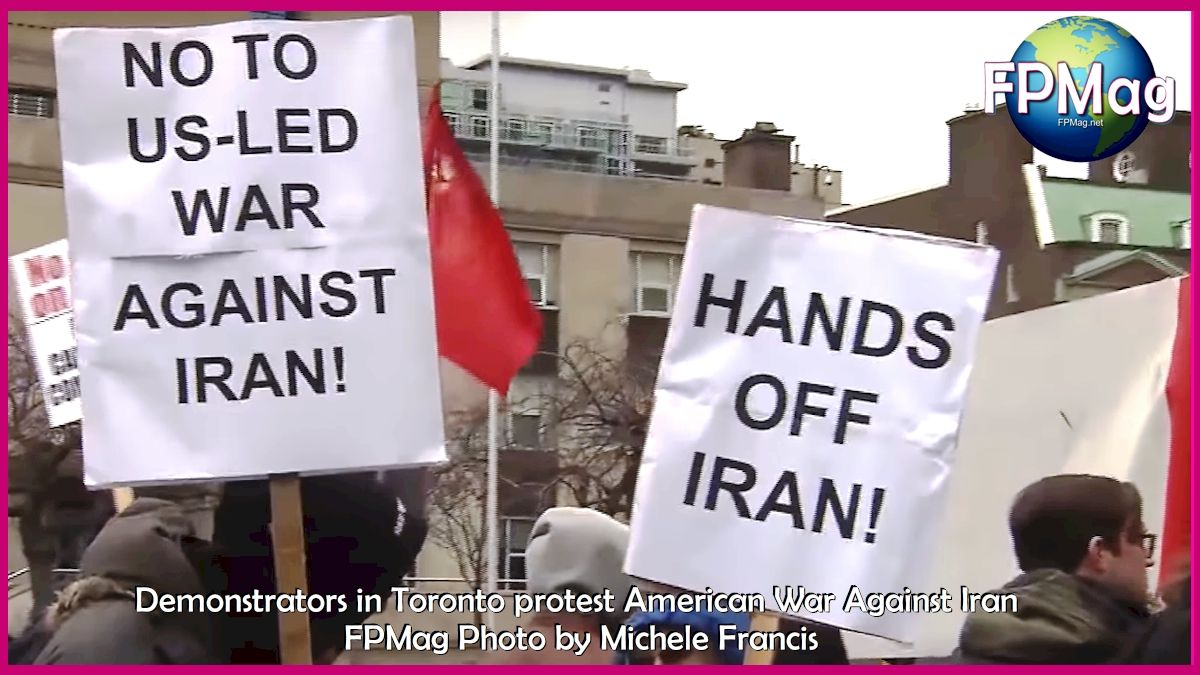 The three parts to the peace proposal offered to all parties:

The statement of  the humanitarian group says it, “has offered a humble suggestion for an immediate stand down in the Middle East.” The document is here. 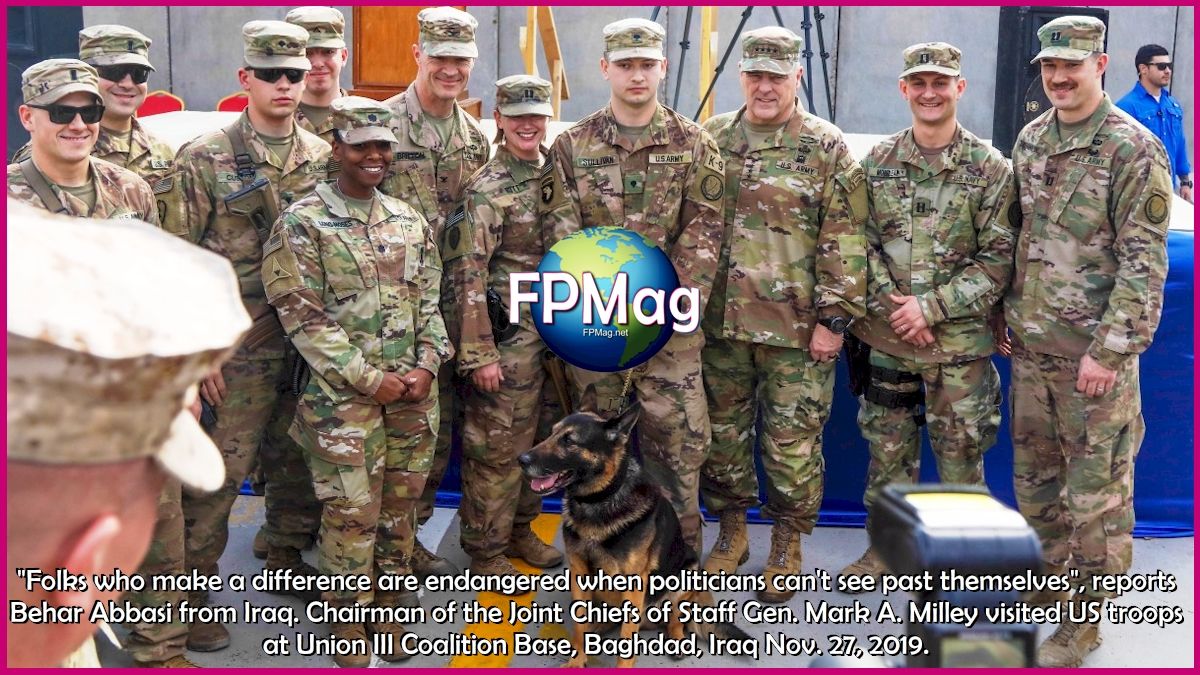 “Folks who make a difference are endangered when politicians can’t see past themselves”, reports Behar Abbasi from Iraq. Chairman of the Joint Chiefs of Staff Gen. Mark A. Milley visited troops at Union III Coalition Base, Baghdad, Iraq Nov. 27, 2019. Milley, the 20th Chairman of the Joint Chiefs of Staff, visited the base to recognize excellence and build morale for the holidays (U.S. Army photo by Staff Sgt. Desmond Cassell)

A draft document widely published Monday shows US Brigadier General William Seely saying to Abdul Amir, Director Combined Joint Operations Baghdad of the Iraqi Defence Department,” in deference to the sovereignty of the Republic of Iraq, and as requested by the Iraqi Parliament and the Prime Minister, we will be repositioning forces over the course of the coming days and weeks to prepare for onward movement…”

“We respect your sovereign decision to order our departure,“ the letter continues.

The letter can be read from here. 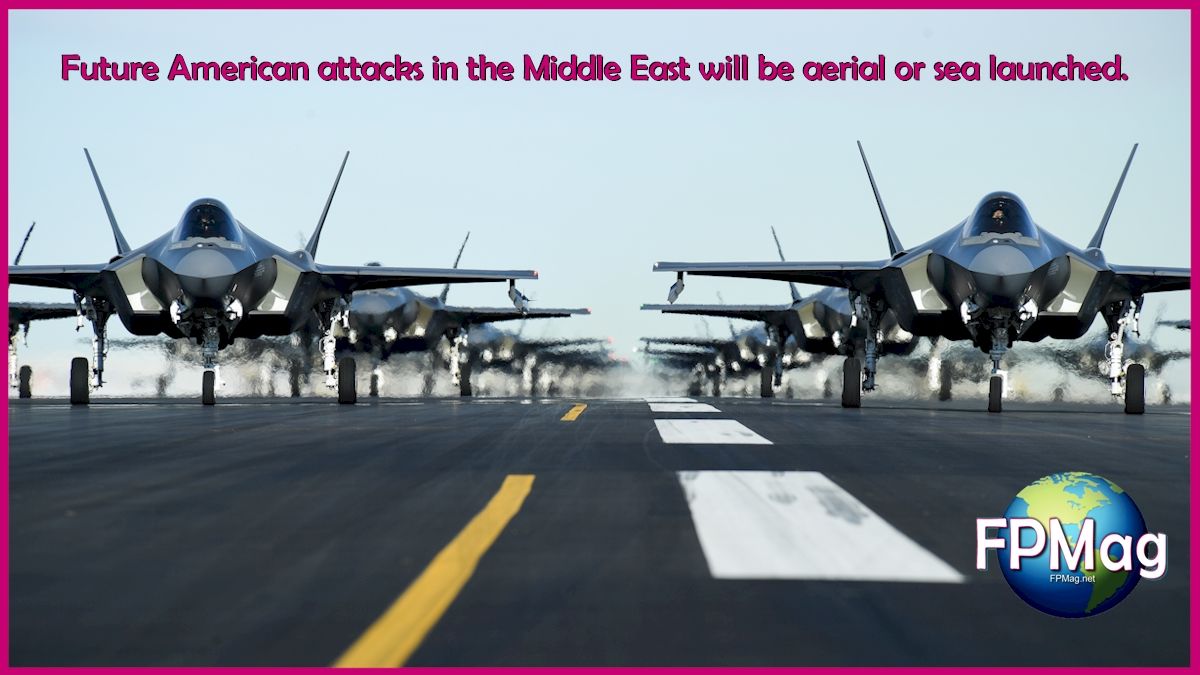 Military observers agree that the United States does not need to have so many thousands of troops (currently around 10,000 including troops enroute plus 2000 to 3000 contractors) in Iraq to enforce its global interests.

Most observers FPMag interviewed say the only reason such a massive troop buildup has continued past the defeat of ISIS (according to Donald Trump) is to surround Iran as part of a personal vendetta of Trump against Iran that surfaced in May 2018 when Trump pulled out of the JCPOA.

Secretary-General @antonioguterres tells reporters: The New Year has begun with our world in turmoil. Geopolitical tensions are at their highest level this century. And this turbulence is escalating. pic.twitter.com/TfoyiX2aO8

“Iraq needs global humanitarian support and guidance not armaments. War reparations from the global community must rebuild the destroyed cities that have been bombed to rubble creating an enormous internally displacement of children and their families. A humanitarian disaster has begun to unfold in Iraq,” says the Canadian-based foundation’s online statement.

Sharon Santiago, a Director of the RINJ women’s foundation says that, “Her excellency Michelle Bachelet Jeria, the United Nations Human Rights High Commissioner is respectfully asked to consider investigation of the matter of the sudden deaths of the following persons at 33°15′29″N 44°15′22″E (Baghdad, Iraq) on or about 3 January 2020 1 a.m. (local UTC+3).” 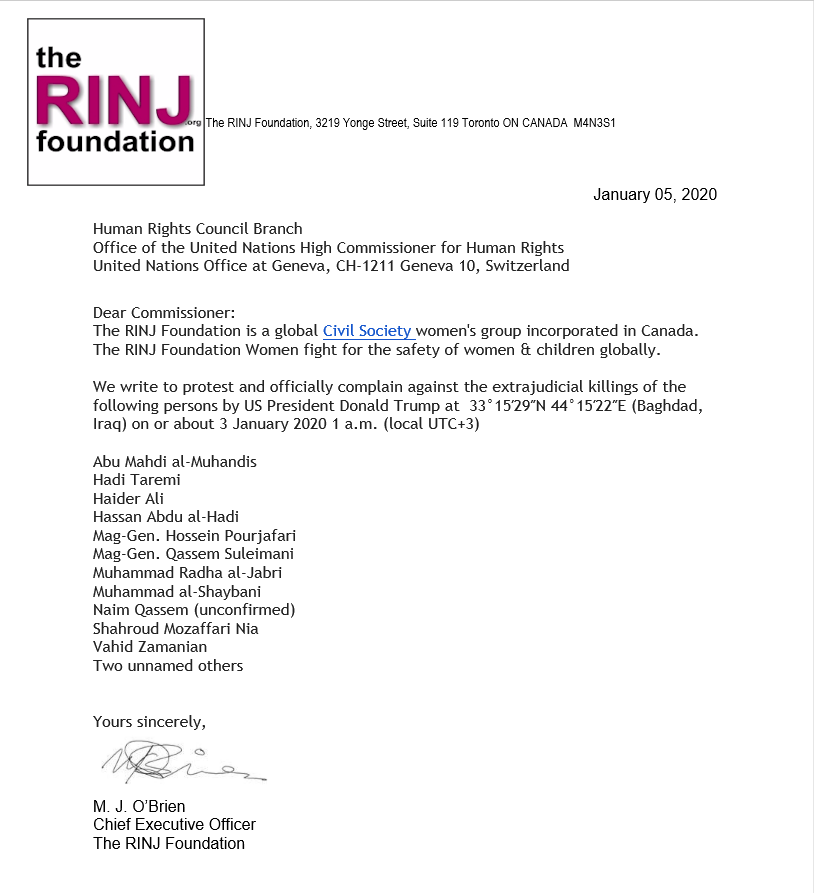