The epicentre of a novel coronavirus outbreak is Wuhan city in the Hubei province of China. This city of 11 million people features many lakes and parks, including the expansive, picturesque East Lake.

Wuhan has ultra modern hospitals and a high proportion of university educated citizens. Currently many thousands of patients are experiencing respiratory symptoms primarily because “this is winter and the height of the cold and flu season,” say FPMag correspondents. That fact, they say, is inundating hospitals and medical staff with tens of thousands of patients for screening and testing.

Already the People’s Liberation Army of China has sent 450 medical doctors, Friday, with their medical gear, and is “preparing to send additional resources,” say casual sources in Beijing within the military infrastructure. 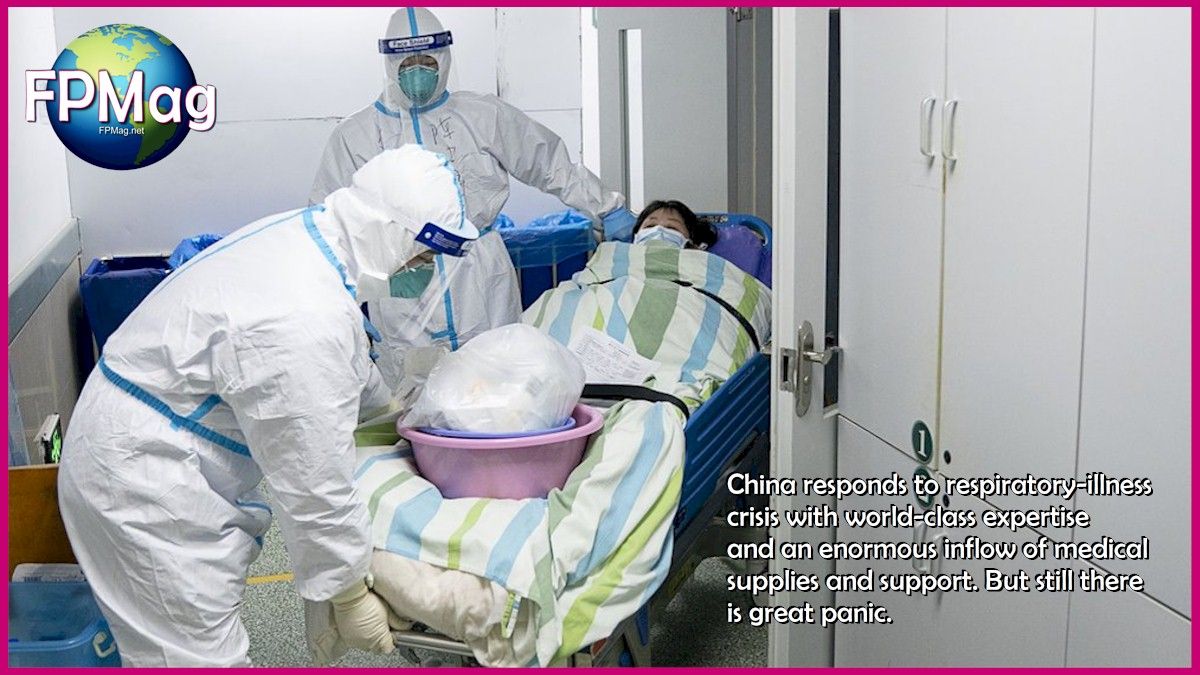 In an open area on the outskirts of Wuhan a second hospital will be built in addition to the first described in FPMag‘s report yesterday.

According to FPMag correspondents on the ground in Wuhan, the second emergency facility is being built to exclusively accommodate 2019-nCoV pulmonary patients. This centre will have over 1300 beds and specialized testing units in order to screen and test the flow of acute lower-respiratory symptomatic patients.

Currently, say officials via the Chinese state media, the testing infrastructure does not match the overwhelming flow of patients, most of whom will be afflicted with the usual seasonal colds and flu viruses from which normal recovery should be expected.

The first emergency hospital’s construction continued yesterday with foundation digging and the mobilization and shipping of emergency prefabricated modules. It will be ready for systems integration and logistics support crews at the end of the month say the construction workers at the edge of the city.

Meanwhile China has been urged to conduct investigations to understand the epidemiology and the evolution of this currently named “2019-nCoV outbreak”, including specific investigations to understand the source of the novel coronavirus, “notably the animal reservoir, and animals involved in the zoonotic transmission, as well as the understanding of its full potential for human-to-human transmission, and where transmission is taking place, the clinical features associated with infection, and the required treatment to reduce morbidity and mortality,” says the World Health Organization in its Friday brief.

It is not known, “how easily or sustainably this virus is spreading between people” notes the American Center for Disease Control in a report updated 24 January.

Statistics are too vague at this early point in the outbreak.

Vague statistics are not to be published said the editor of FPMag whose experience includes the Toronto SARS outbreak and the Middle East MERS crisis.

“We have no data that is reliable while hundreds of thousands of patients await test results. Creating inaccurate morbidity and mortality data will only add to the current panic needlessly. Readers might like to review nurse Francis’ advice on staying healthy and safe and feel confidant in that. So far some 14 countries have reported anomalous coronavirus cases that appear to be the same as the Wuhan outbreak and likely by the time a period is added to this sentence the information will have changed. That’s how dynamic the crisis has become at this early stage. Nevertheless, it is a serious crisis from all indications.”—Editor

FPMag will keep readers posted once reliable data has been obtained. Specific infection rate information available at this time is not reliable. Once Chinese and global authorities have built their support infrastructure and instituted medical directives and protocols for mass processing screenings and tests, FPMag will update readers. Download the APP or subscribe on Google News.

The second Wuhan hospital will likely start accepting patients by 15 February while the first facility is expected to begin early admissions around 3 February, suggest all of a variety of sources.

On medical emergencies, say experts, “fear is normal, panic is abnormal, and unhelpful”.

While the citizen reporter’s comments are outrageous, they reflect the level of panic and misinformation prevalent in the Wuhan novel coronavirus crisis.

Four doctors and a dozen nurses in an urgent care facility is a good response say experts, and a four hour wait for triaged patients who exhibit only upper respiratory complaints is perfect. If symptoms change to become relevant to a novel coronavirus, the patient is in the right place, a hospital.

Onset symptoms may be only upper respiratory ails which means the 2019-nCoV virus begins looking like a mild, common cold. Keeping the patient in an urgent care waiting area is a good tactic. Sending patients home after pre-screening is an opportunity wasted in the event the onset symptoms become worse over a short period.

The Disease is the Problem

“All patients with acute respiratory ails (pneumonia-like symptoms) and/or prolonged diarrhea should be tested if they have a concomitant exposure risk,” says nurse Michele Francis of The RINJ Foundation.

Criticisms of response arise out of panic and not overly significant issues.

With the Lunar New Year holiday plans and a normally high incidence of upper respiratory ailments owing to the winter cold and flu season, the situation is a huge compound crisis. Thousands of citizens in China believe they may be infected with 2019-nCoV virus but hopefully their symptoms indicate the common cold.

“They should indeed get tested,” says RINJ nurse Michele Francis. But the burden on local medical infrastructure was sudden and overwhelming with huge lineups outside the Wuhan general hospital as well as other facilities, all last week.

“No system could be normally prepared to handle that sort of deluge,” commented the nurse practitioner.

As reported by FPMag, the outbreak province’s officials have harnessed massive emergency infrastructure support and the Chinese military has already flown in hundreds of doctors and their equipment via military transport arriving Friday, local time (GMT+8). The backlog of patients is predicted to have relief already.

China is taking this outbreak very seriously and President Xi Jinping has escalated federal support. Some 80 million Chinese are now quarantined and that number will grow say officials.

Medical supplies rolling in to meet surge of symptomatic winter cold and flu patients who fear their symptoms may test as Wuhan novel coronavirus.

Online criticism of the Chinese government, notes the senior management of The RINJ Foundation, a global civil society women’s group offering specialized medical services, says that relying on its membership’s experience dealing with SARS outbreak in China and Canada during 2003, as a comparison model, China’s response is much different—much better.

The World Health Organization (WHO) concurs with this observation.

“Biting remarks in the North American media are not helpful and thus it would be much better if writers stuck to the facts and shelved their racial bias and their rivalry mentalities as issued by impeachable jingoistic loudmouths in their governments,” Katie Alsop, a RINJ Director and spokesperson added pointedly.

“This 2019-nCoV has no cure and it has no vaccine. It has entered the human species and it will change or even morph into something else before researchers understand it sufficiently to make predictions on the outcome of this outbreak.”

“Patients must ‘self-cure’ which means that those patients with the strongest health and immune systems are more likely to survive with the help of medical support caregivers who can prevent additional comorbid complications,” adds the RINJ official.

“Transparent and cooperative are the keywords that best apply to the difference from China’s reaction to SARS then to the novel coronavirus of Wuhan now,” notes Katie Alsop of The RINJ Foundation.

China’s robust response implies a very serious outbreak which must be fought with containment and prevention.

When asked about the statistics on the spread of the disease, the RINJ spokesperson said that “we need to gauge the reaction of China to appreciate the seriousness of his outbreak.”

“In simple terms, it is not possible to deliver accurate patient infection numbers, and the morbidity of the illness, but it is safe to say it is likely highly morbid among the very young and among seniors. We have now heard from our members in Hubei province who describe a panic to get into hospitals. Many people have been turned away until testing backlogs are processed.”

The US Centers for Disease Control and Prevention reminds Americans that, “When person-to-person [virus] spread has occurred with SARS and MERS, it is thought to have happened via respiratory droplets produced when an infected person coughs or sneezes, similar to how influenza and other respiratory pathogens spread. Spread of SARS and MERS between people has generally occurred between close contacts. Past SARS and MERS outbreaks have been complex, requiring comprehensive public health responses.”

“Unfortunately,” says Ms. Alsop, “this is typical flu and cold season hence the numbers of persons who worry about infection will be extremely high.”

“Nevertheless,” she adds, “in the vast majority, the more than 100,000 patients who have turned up at hospitals with upper respiratory infection symptoms will not test positive for the outbreak novel coronavirus ( 2019-nCoV).

“On 7 January, Chinese authorities confirmed that they had identified a new virus. The new virus is a coronavirus, which is a family of viruses that include the common cold, and viruses such as SARS and MERS. This new virus was temporarily named 2019-nCoV,” the WHO reports.

Experts are happy with cooperation and transparency of China

Chinese health authorities quickly posted the full genome of the 2019-nCoV in GenBank, the NIH genetic sequence database, and in the Global Initiative on Sharing All Influenza Data (GISAID) portal. This has allowed global medical authorities to set a test criteria for each nations’ citizens. Some 14 or more countries at the time of publication report having patients who are infected. That number will change in the hours and days ahead.

Speaking to colleagues in Nigeria, South America, Europe, Hong Kong and in China before answering FPMag‘s questions, Katie Alsop noted that specialists in the field of communicable disease outbreaks have “a million questions” and “this time, they are getting answers from Chinese authorities and also a concomitantly better response from the WHO, which is also getting better data from Chinese officials.”

“The coronavirus is so named because under a powerful microscope it appears to have a crown,” notes the RINJ spokesperson. “It is very common but has some strains that are more dangerous to humans.”

“The world is rife with talk about enemies that adherents to conflict behaviour like to tout as evil, but for all sides, the real enemy is non human.”

The enemy is a living, but to most lay people, an unseen entity that plays dirty.

The enemy is a biological antagonist that can reproduce inside the cells of humans. When attacked by a virus, each infected human cell is forced to produce copies of the original virus at an explosive rate.

This enemy is highly adaptable, a complex microorganism containing its own genes which allow mutation and evolution of its species.

As noted in this article, the Wuhan novel coronavirus is expected to evolve and even morph into its eventual response to the human cell and t-cell environment.

The coronavirus enemy can survive and prosper in mammals. Humans are mammals.

The Wuhan novel coronavirus is a serious enemy for the human race to come together and defeat. The alternative to globally comprehensive containment and prevention of the spread of this enemy is an unknown but probably extremely high mortality.

“This is hence a call to all peoples to come together peacefully and cooperatively and fight arm-in-arm for the vanquishment of a common enemy,” says the CEO of The RINJ Foundation.