Sadly, as the Lunar New Year is upon us all, an illness has impacted more than 40 million Chinese people and their extended families who are under travel restrictions as China’s government responds quickly to halt the human-to-human spread of an animal-sourced respiratory illness with high morbidity.

Coronavirus is quite common but some variants have a morbidity rate ranging from 10% to 35% although only an extremely narrow segment of the global population has ever been infected.

The outbreaks of  SARS and  MERS had morbidity rates of 10% and 35% respectively although only a small number of persons were infected.

The high morbidity rate gets the attention. This outbreak is getting maximum response, and fast.

“In the outbreak city of Wuhan, a prefabricated, 1,000-bed hospital for patients is being constructed and will be ready for use in one week,” say Beijing medical sources. 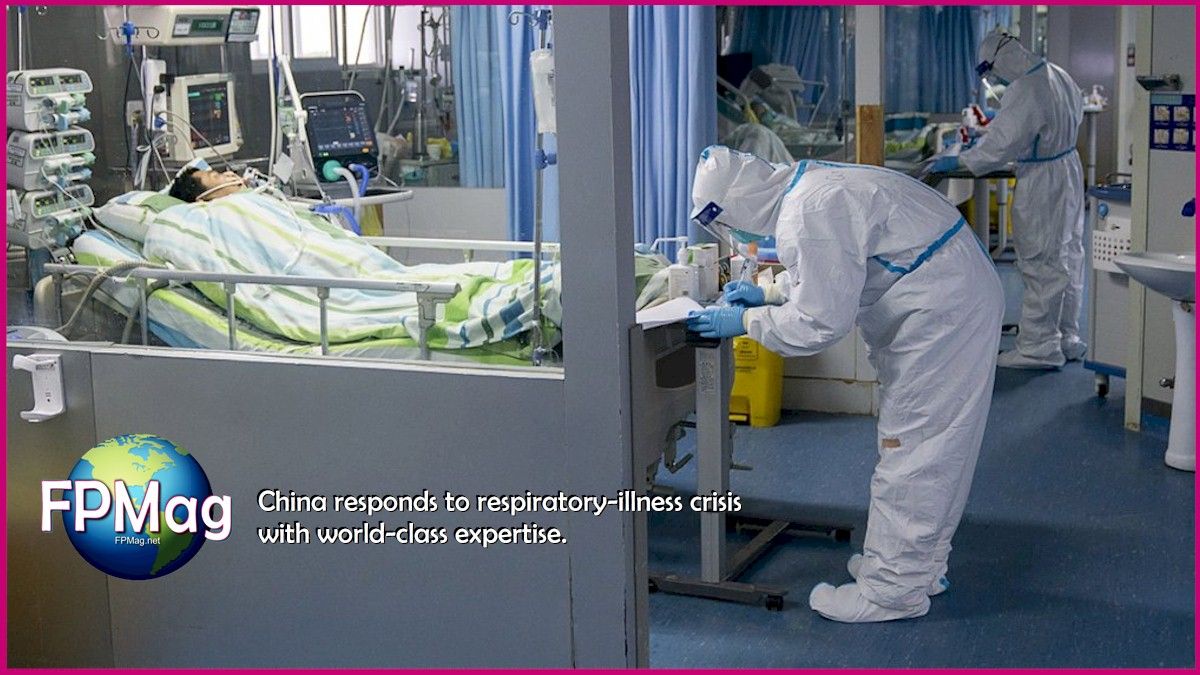 The 2019-nCoV Virus is what the Wuhan Respiratory Illness Crisis is now called. It appears to have originated in animals.

In preparing to write this article, FPMag consulted with medical crews of the RINJ Foundation and the World Health Organization (WHO) and were told that most people who fell ill this week, in the vast majority, were not infected with any type of novel coronavirus.

“A person is more likely to be struck by lightning,” said Michele Francis, a nurse working in urgent care in South America. “In both cases, there are preventative steps to be taken,” she added.

“This is a media event, although public health officials are always cautious to avoid pandemics, and China is doing an excellent job of providing care and suppressiing the contagion in its outbreak area of Hubei  province” says Michele Francis.

“But for most people,” she added, falling down the stairs through carelessness or anxiety distraction, is a more likely risk than 2019-nCoV. Families must always stay focussed on basic healthy living. That is the best advice for everyone.”

Watch:  2019-nCoV is a respiratory illness which is antagonized by pollutants. Air pollution is so bad in so many parts of the world that wearing an air filtration mask is indicated . Wearing masks routinely is indicated in most large cities. Here is how to properly wear an N95 mask. Courtesy of The RINJ Foundation

Update: RINJ member warns that people should wear masks in public. Unconfirmed reports of very high rate of infections would substantially lower the morbidity rate. Little is known right now but there is a possible 90,000 candidates for testing in the outbreak province.

The behaviour of 2019-nCoV has not yet been fully revealed by itself, however, the WHO has initiated steps to learn more. It was only first detected 7 January.

Hence the WHO has asked of China:

When asked by FPMag about best precautions for the safety of women and children around the world, RINJ nurses unanimously urged for “all the normal good health practices”.

“No matter who you are, get plenty of sleep; eat a healthy diet and take all prescribed medications as per your doctor’s orders,” notes nurse practitioner Michele Francis.

“Families should be following this advice always, and realizing also that maintaining healthy habits minimizes life’s stress and less stress lowers many vulnerabilities,” she added.

“Use correct food preparation including the cleaning of all vegetables plus remember that eggs and all meats should be be cooked in a narrow range to 170°F/74°C for the most safety. Then allow a sitting time of three minutes before consumption. Use a thermometer to check temperatures. Some items require slightly lower heat but stay on the safe side,” added nurse Francis. “And don’t eat bats,” she added with a smirk. (This more virulent type of coronavirus illness is often attributed to animals but in specific terms, snakes and bats, which may have passed the virus to other animals prior to its spread to humans.)

Bat soup is a popular dish in #Wuhan, #China, a location of the recent #coronavirus outbreak. Scientists link the deadly coronavirus to the flying mammals. pic.twitter.com/RSQ19WgPRj

“Look at your family as an organization and pick a member to be the centrepoint authority on health and safety,” suggests a nursing team leader, Jessica Williams. “You should be doing this always,” she added.

Williams continued with the basics: “Frequent  hand washing; wearing a properly fitting N95 mask in high risk crowded areas; sanitize door handles; sanitize washrooms regularly; and maintain a clean home and work environment.  Sneeze and cough into tissue or the crook of your arm. Treat even minor colds and coughs with bed rest, plenty of fluids and medical attention if indicated by *breathing-difficulty, excessive diarrhea and or abdominal pain (more than two days), prolonged fever or any alarming vital signs.”

“Contact your doctor or  health authorities in case of symptoms indicating acute respiratory infection (apparent bronchitis or pneumonia),” she emphasized, which is also the public information advice of the World Health Organization.

China has responded to the crisis with great care for the family-support infrastructure. “There are no food supply issues,” say logisticians.

According to a statement issued  by the Hubei Provincial Department of Commerce, it has taken “multiple measures to protect the supply of Wuhan’s daily necessities market”.

“The first is to put in emergency reserves for the necessities of the Spring Festival. 1.55 million kilograms of eggs, 5 million kilograms of vegetables, 1 million kilograms of fresh fish, 200,000 kilograms of halal beef, and 6,000 white-striped pigs have been arranged for ordering through more than 300 “spring supply” supply outlets. Since January 21st, the first round of 500,000 kg of frozen pork in local reserves has been released in conjunction with the development and reform department.”

“The third is to implement a 24-hour green channel for logistics and distribution vehicles for daily necessities such as vegetables and meat entering Wuhan to ensure traffic. The fourth is to conduct market supply inspections, identify problems, and schedule in a timely manner to ensure the normal supply of the city’s main necessities.”

The Chinese military known as the People’s Liberation Army (PLA) has issued a statement saying that “450 people from three medical teams of the Chinese People’s Liberation Army departed from Shanghai, Chongqing, and Xi’an by military aircraft, and all arrived at 23:44 on the 24th. Wuhan Airport has officially stepped up its efforts to provide treatment to local hospitals in Wuhan that are designated to receive pneumonia cases of new coronavirus infection.”

[Translated] “The medical team is drawn from the Army, Navy, and Air Force Medical University, each with 150 members, divided into a command group, an ordinary patient treatment unit, and a critically ill patient treatment unit, equipped with a respiratory department, an infectious disease department, a hospital infection control department, and intensive care. And other medical experts, many of whom have had Xiaotangshan’s experience in fighting SARS  and helping Africa and Egypt.”

[Translated] “After receiving the mission,” the PLA report continues, “the three universities in the Army quickly deployed and implemented the emergency mobilization. All the medical staff took part in the battle and took the initiative to request to participate in the mission. Participants in the medical team are all medical personnel with excellent political, professional and physical qualities. They said that the people ’s army is the people, and the people are in distress. The soldiers are the first, for the people ’s interests, for the people ’s health, have the ability and confidence to work with the people across the country to overcome the epidemic, and win the battle to prevent and control the epidemic.”

The Emergency Committee of WHO, convened on 22 and 23 January 2020 under the International Health Regulations (IHR 2005). The committee set out that it “considered that it is still too early to declare the 2019-nCoV outbreak in China a public health emergency of international concern (PHEIC). The WHO Director General accepted this advice.”

We are tracking the 2019-nCoV spread in real-time. Cases and locations can be viewed here; data available for download. #nCoV2019 @JHUSystems https://t.co/qfVymyUf7v pic.twitter.com/SS9zUwrQxT