Her brilliant smile says: Free at last. She might otherwise be dead.

Look: Smiling Rahaf Mohammed al-Qunun, is with a welcoming and joyful Minister of Foreign Affairs, Chrystia Freeland, in Toronto, Canada.

Human rights defenders are heaping accolades on the Canadian team. 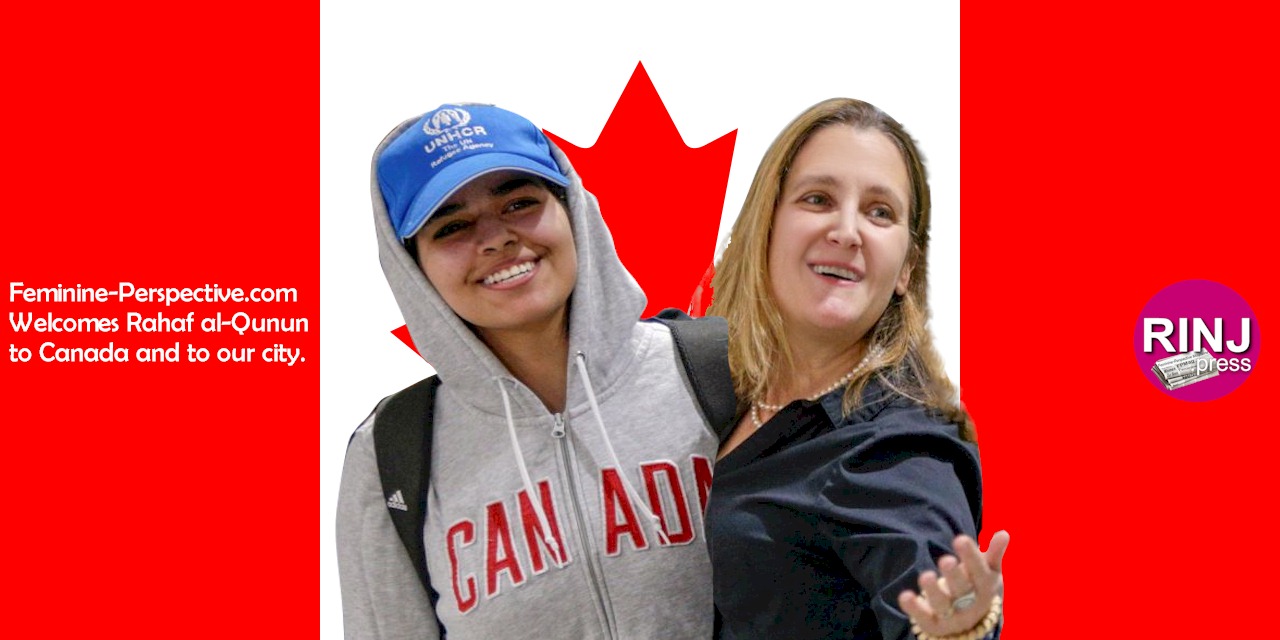 News story and background by:  (On assignment in Shenzhen, China):  Micheal John with files from Behar Abbasi in Sana’a, Yemen and Katie Alsop in Paris, France.

“Don’t let anyone break your wings, you’re free. Fight and get your RIGHTS!” is Ms. Rahaf’s Twitter mantra.

She did it. Two new Sheroes for 2019 step into the light.

Standing up to the worst human rights violators of women’s rights, Chrystia Freeland with Justin Trudeau have shown the world a better way for remedial action. Get the UN to declare the victim a refugee and the good people of decent countries will be a part of this important humanitarian action. #WithRefugees.

Extraordinary work of  the United Nations High Commission for Refugees led to Ms. Qunun leaving the Bangkok airport in the care of the agency and Canada quickly issuing asylum and the extraordinary status of “resettled refugee“.

The UNHCR had issued a statement on 7 January, stating that: “The Thai authorities have granted UNHCR access to Saudi national, Rahaf Mohammed Al-Qunun, at Bangkok airport to assess her need for international refugee protection.”

It deemed that protection of the young adult was indeed required. Canada’s minister of Global Affairs sprang into action and the Prime Minister of Canada approved asylum in a heartbeat.

Rahaf Mohammed Mutlaq al-Qunun, is a very lucky young lady, born 11 March 2000, in Saudi Arabia. Her peril was real, say expert women who have been working on the Saudi Arabian Human Rights quagmire for the past five years.

She has arrived safely in Canada today at Lester B Pearson Airport in Toronto after a grueling and dramatic escape from Saudi Arabia where women are owned as chattels by at least one man under what human rights defenders have called an absurd guardianship program.

based on the 1951 Convention and the 1967 Protocol, I’m rahaf mohmed, formally seeking a refugee status to any country that would protect me from getting harmed or killed due to leaving my religion and torture from my family.

I seek protection in particular from the following country
Canada/United States/ Australia /United kingdom, I ask any if it Representatives to contact me.

Expert: A heart wrenching experience likely leaves Ms. al-Qunun sad but safe. She has nine siblings she will surely miss.

“This is a very traumatic experience for Rahaf, no matter how buoyant she may seem right now”, notes Sharon Santiago, an expert in PTSD treatment.

The young woman managed to flee her abusive parents and dodge either an honour killing or forced marriage, says Abbasi who has been reaching out to family and friends for comment..

While visiting in Kuwait as the first week of 2019 ended she slipped away and made her way to Thailand enroute to Australia, telling the world what she was doing and why, with lightning-quick updates on social media.

In the ASEAN nation of Thailand, the drama continued. A series of scurrilous doings in Bangkok by an undercover Saudi agent resulted in this young refugee having her passport stolen and the Thai authorities inventing accusations against Ms. al-Qunun.

Thai sources from the immigration side of the Bangkok airport tell FPMag that the “Saudi agent caused confusion among officials because the young lady was without a passport.”

“The matter has ended well”, said the official who does not wish to be identified owing to her speaking without official permission. “It is out of Thai government responsibility, now,” she added, “and the girl is happy and safe.”

According to Ms. al-Qunun’s exchanges in social media, her family had planned to kill her in what nurse Behar Abbasi, a Muslim in Yemen who has worked as a nurse and midwife under Sharia Law in both Mosul, Iraq and in Saudi Arabia, calls this threat an “honour killing” because as a child, the young woman had denounced Islam which is a crime in the Kingdom of Saudi Arabia (KSA), says Abbasi.

For her choosing her own path of spirituality which for all persons is a human right, the death penalty awaited her.

Instead of facing such punishment, her father who is both a religious and political figurehead in al-Sulaimi, in the Ha’il Region of Saudi Arabia, had arranged a forced marriage to a man thought to be a devoted adherent to Sharia Law.

“Despite it being a woman’s private matter, Saudi Arabia’s violently abusive patriarch insists on male control of women to the point of quasi-ownership”, noted Abbasi, who made several attempts to contact the family of the proposed husband but was rejected somewhat emphatically.

There are thousands of human rights cases in the KSA

Dozens of women are being held in violently abusive detainment in Saudi Arabia.

According to Katie Alsop of The RINJ Foundation, the women’s civil society group has made numerous presentations to the Saudi government seeking the release of women prisoners whose arrest has been apparently caused by their driving a car or their being outspoken in social media. Numerous male human rights activists and journalists have also been detained without due process and are being grossly mistreated in prison.

“It would be far better for the House of Saud to make the necessary changes to public policy and allow for Saudi Arabian people to have their due rights and safety than it would be to have a complete insurrection and overthrow of the Saudi Crown dictators,” said Alsop in a brief exchange on the matter of RINJ demands for the release of human rights defenders.

Footnote: *Madeha al-Ajroush and *Aisha al-Mana have since May 18 been released from prison but with charges pending. The RINJ Foundation keeps these names on the list and is insisting that all charges be rescinded.

According to The Independent, the arrests of Madeha al-Ajroush and Aisha al-Mana and three other women, came “just six weeks before Saudi Arabia was due to lift the world’s only ban on women driving“.

The RINJ Foundation, according to Sharon Santiago, a regional director, will seek a remedy by any legal and extra-legal actions that are available to obtain the release of additional human rights defenders known to the persons in the above list to have been captured and held prisoner.

She said, “We don’t know exactly what goes on in these dark places but have been told the numbers of human rights defenders withering away in the darkness of inhumanity is shocking.”

Israa al-Ghomgham and her peers are Political Prisoners. 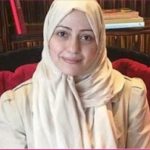 Women Human Rights Defenders in Saudi Arabia are grossly mistreated. Israa al-Ghomgham does not want to be killed by Mohammed bin Salman who says he wants her put to death. Others fear that too. Her fate is uncertain. She has been imprisoned since 2015 for driving a car in Saudi Arabia and other annoyances to the House of Saud. For example, she wanted equal rights for Shi’ite Muslims living in the eastern province of Qatif in her country that she loves deeply. The RINJ Foundation says that Saudi Arabia must release all human rights defenders from prison. Many are beaten and raped regularly according to FPMag sources and numerous Associated Foreign Press reports. The RINJ Foundation has written to bin Salman and requested their release, even offering to post bail. The next court hearing: Sunday 13th January 2019.

Political Prisoner Loujain al-Hathloul was said to be the most influential human rights defenders in Saudi Arabia. Loujain’s health and safety are now under morbid threat.

Sources says she is being raped and beaten by her jailers. 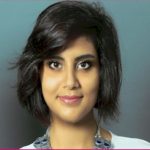 Imprisoned many times for driving a car in that country she was recently incarcerated permanently. She is a Saudi women’s rights activist, a social media figure, and a political prisoner. She is a graduate of the University of British Columbia in Canada. The RINJ Foundation has repeatedly demanded her release from prison since May 2018 when she was last arrested along with several prominent women’s rights activists, on the charge of attempting to destabilise the kingdom of Saudi Arabia by speaking out against escalating human rights violations since Mohammed bin Salman took power. Activists have protested abuses of women’s rights and even the horrific war against humanity in Yemen.

Authoritarians or Dictators Who Create Violence Against Females

1 Right to Equality
2 Freedom from Discrimination
3 Right to Life, Liberty, Personal Security
4 Freedom from Slavery
5 Freedom from Torture and Degrading Treatment
6 Right to Recognition as a Person before the Law
7 Right to Equality before the Law
8 Right to Remedy by Competent Tribunal
9 Freedom from Arbitrary Arrest and Exile
10 Right to Fair Public Hearing
11 Right to be Considered Innocent until Proven Guilty
12 Freedom from Interference with Privacy, Family, Home and Correspondence
13 Right to Free Movement in and out of the Country
14 Right to Asylum in other Countries from Persecution
15 Right to a Nationality and the Freedom to Change It
16 Right to Marriage and Family
17 Right to Own Property
18 Freedom of Belief and Religion
19 Freedom of Opinion and Information
20 Right of Peaceful Assembly and Association
21 Right to Participate in Government and in Free Elections
22 Right to Social Security
23 Right to Desirable Work and to Join Trade Unions
24 Right to Rest and Leisure
25 Right to Adequate Living Standard
26 Right to Education
27 Right to Participate in the Cultural Life of Community
28 Right to a Social Order that Articulates this Document
29 Community Duties Essential to Free and Full Development
30 Freedom from State or Personal Interference in the above Rights