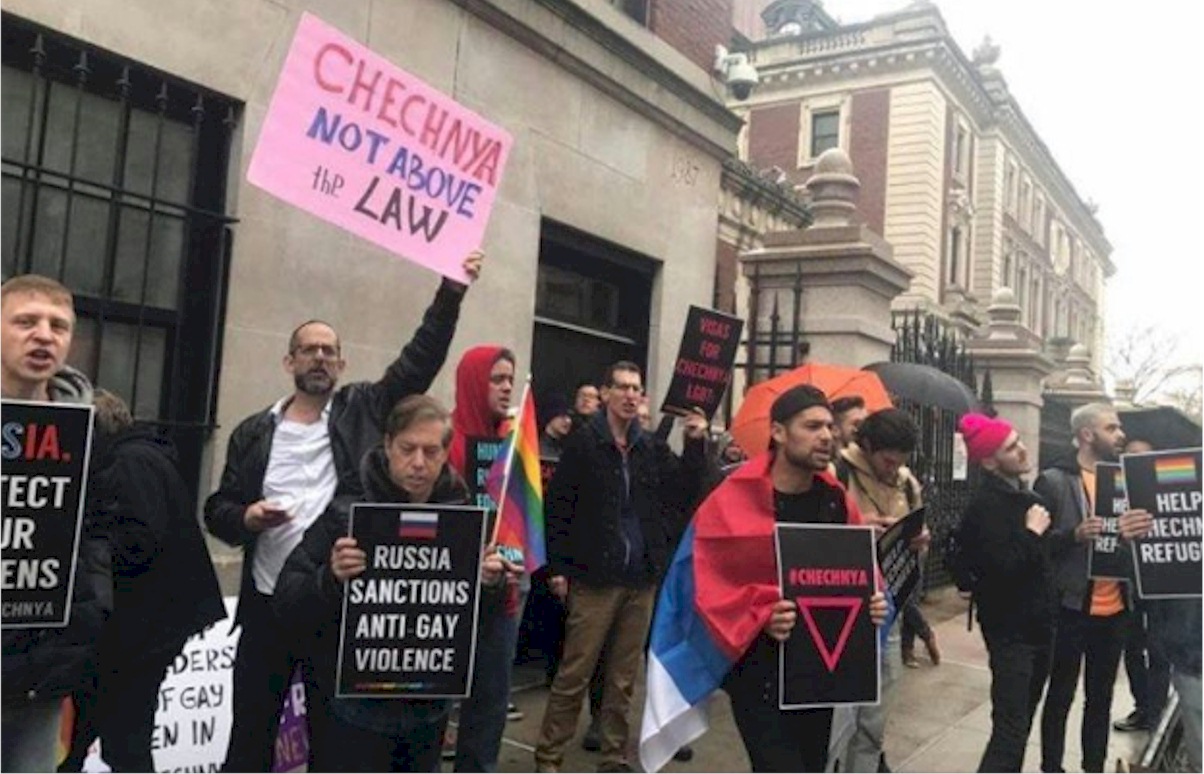 A rally in support of the LGBT people of Chechnya outside the Russian consulate in New York.
Photo Credit: Russian LGBT Network / Facebook

The Russian LGBT Network has signaled The RINJ Foundation that it now has evidence that since the beginning of December last year and not just recently, and even in the capital of Chechnya, Grotsky, people who are suspected of belonging to the LGBTQ2 Communities are suffering renewed persecution now including sexual assault, torture, rape, and detention and that there have been extrajudicial killings.

The number of deaths may now exceed twenty persons and more than 40 identified men and women have been tortured and raped in detention cells of official law enforcement operations. Information is coming from community members who have escaped the purge.

The network is acting to assist those who can escape and the persons who are under their care have chilling tales to report.

Bulgarian-born Kosta Karakashyan was so moved by “horrifying” stories of torture against the LGBT community in Chechnya, that he is using dance to express their suffering in a new film. Learn more from this film.

The following is a verbatim Statement of the Equal Rights Coalition on the situation in Chechnya, received from Global Affairs, Canada.

The undersigned members of the Equal Rights Coalition (ERC) express their deep concern about recent reports concerning a renewed wave of persecution of LGBTI persons in Chechnya. These reports indicate that in recent weeks, at least 40 LGBTI individuals have been detained. It has also been reported that two individuals have died as a result of torture.

Over the past two years, persecution of the LGBTI community in Chechnya has repeatedly surfaced as an issue of significant international concern. In 2017, ERC members called on Russian federal authorities to act urgently to investigate and address alleged targeting of the Chechen LGBTI community in the face of reports of arbitrary detention, torture and killing of gay men. The report of the OSCE Moscow Mechanism Rapporteur on alleged human rights violations and impunity in the Chechen Republic, released late last year, confirmed allegations of extensive human rights abuses occurring there since January 2017, including successive purges against LGBTI persons.

Today, we again call on the Russian authorities to take urgent action in response to this latest wave of reported violations of the human rights of LGBTI persons in Chechnya. All persons who have been detained based on their sexual orientation or gender identity and who currently remain in custody should be released immediately. There should also be a swift, thorough and impartial investigation into the alleged persecution, arrests and torture of LGBTI persons and any deaths that have resulted. Those who have directed and carried out these acts must be held responsible.

We will continue to call on the Russian government to ensure that LGBTI individuals in Chechnya are treated as equal members of society and benefit from equal protection of the law, in accordance with Russia’s constitutional guarantees and its international human rights obligations.

Co-signatories of this missive: