Iran’s crumbling government has put the people in serious trouble. Who will care? Commentary.

Iran has been telling stupid lies again—very stupid lies. This time its not about passenger plane shoot-downs. Their latest pinocchio nose comes from their mishandling a monstrous COVID-19 outbreak and then telling whoppers to cover up the fact that Iran has no government. For the world, that’s pulling the pin from the grenade. The world is alarmed because Iran has hurt the human race. Fortunately there are better men than these men.

The system of government in Iran is flawed and some of its failings are coming under bright light. It now looks indefensible.

It’s all about machismo, in Tehran.

The backdrop to the world’s worst public health disaster, ever.

In Iran, women are nothing and men rule. The ruling class of men play noisily with toys day in and day out, always seeking to acquire more. They like nuclear weapons, warships, missiles, warheads, grenades, assault weapons, and anything that goes bang and psychologically extends their penises and bolsters their self-perceived masculinity. That’s their own impression. The world sees them as do their own constituents, as ridiculous male clowns.

The men run the country based on a testosterone-driven anger. One might actually see their blood pressure rise if they read this.

They hate jews; hate each other; hate Sunnis, in fact their paradigm for governance is  almost identical to that of Saudi Arabia, they just have different minded in-laws.

Every country has the right to self determination and the right to decide on its method of governance. There is no reason why Iran’s government cannot change itself; morph into something its people have indicated they want; and always do the right thing for the people, every time.

Iran simply needs leaders to decide that national prosperity and well-being are better goals than being the meanest dipstick hanging out in the alleyways. That’s what Iran is doing right now. Hanging out in alleys—with misguided Russians.

Look at the Iranian government hoodlums (agents?) in Damascus who have been infiltrating Bashar al Assad’s Regime. The great irony is that jackass Assad thinks he is running Syria. No. Iran is running Syria with Russia’s help. Sort of.

Russia doesn’t get it. Russia is so far out of its league in the Middle East slums that the well-intentioned Ruskies roaming around Damascus may as well be wearing welder’s goggles and earmuffs.

A two-year-old Venezuelan toddler would have a better chance of understanding the jargon flying around in a North Korean women’s club in the midst of an exciting bingo game than would a Russian of understanding the age-old crapola between the Sunnis, Shiites and the Jews jammering at each other over a Damascus alley shisha if conceivably that could ever happen (in either anecdote) without a gunfight.

Russians are too logical, an inheritance from their magnificent cultural heritage built by brilliant minds. This does not fit in a “cultural” world built by men whose blood-lust is so self-empowering they are willing to eat each other’s hearts. (Cynically referring to the rare cases of cannibalism in Islamic environments. Also, ISIS, a malevolent cult of Sunni Muslims trained its thousands of fighters to eat the hearts of non Muslims they slayed in their murderous rampages.)

It may function for a couple decades or less if there are gobs and gobs of money to compensate for the thefts from the people by the kleptocracy and the manic fascination with expensive things that go boom. But too many wars empty the money pit making it less attractive for the columns of sycophants to hang around. (Remember Shakespeare’s  Julius Caesar? “Et tu, Brute? tr.: You as well, Brutus?” It’s happening to Rouhani.)

The worst offenders are the old men in both regimes whose testosterone levels have been replaced by estrogen and they struggle to remember what lines they should use and what steps they should take in the fight against their supposed enemies. They must do this in order to keep the younger men’s adulation and maintain a cadre of supporters willing to commit crimes to keep them in power. Trying to guess what a manic overgrown testosterone monster would think is the realm of hollywood. The old guys are not up to it and are failing. They can’t fight wars with so many trips to the toilet and forgetting their way and getting lost while trying to find their office again. Trump has the same problem. Don’t go to war, Mr. President.

Sayyid Ali Hosseini Khamenei is a Twelver Shia Marja’ and the second and current supreme leader of Iran since 1989. He was previously the president of Iran from 1981 to 1989. He is an avid right wing conservative who wishes most of the world hadn’t happened.

‘King‘ Khamenei has a president, Hassan Rouhani, who has been taking care of the day-to-day nasty stuff but even he is long in the tooth. Rouhani relied on Qasem Soleimani for the machismo and pushed that guy up front with him standing behind like a warrior showing off his big sword.

Soleimani was murdered along with 11 others by an American assassination attack on 3 January, 2020 in Baghdad, Iraq.

Now there is only Mohammad Javad Zarif who unfortunately for the machismo paradigm comes across as a supercilious runt. His big guns come from Maryam Imanieh (Wikipedia), his wife who is the one known for her role in negotiations leading to the Earth-calming Joint Comprehensive Plan of Action (JCPOA).

Apart from dwindling testosterone in this great-great-grandpa fest, the political party of Rouhani, fabled moderates who did favour prosperity of the people and getting along with the global community, took a trouncing at the recent polls.

A lame duck President Rouhani wanders around filling his pockets with everything he can find before the door is opened in June 2021 to let him out.

Rouhani has lost the levers of power because he failed to revive Iran’s economy, something he bet on arms control against the hard-liners in his country. Many people did not want Iran to succeed as a moderate Islamic nation. Bizarre thinking.

The most ignoramus regime in recent history, America’s Trump cult killed the JCPOA which throttled Iran’s short-lived return to normalcy and ruined the comeback of Iran’s moderates. Now only the right wingers exist. They will get rid of Rouhani in the June 2021 elections and go to war. Rouhani may not even physically survive the recent rout.

Syrian President Bashar al-Assad’s regime will be swarmed with more support from the Iranian hard liners and the Saudis will have their asses kicked but good by Yemeni Houthis backed even more by Iran’s conservatives.

In all this the conflict resulting from Mohammed Bin Salman’s sock puppets in Washington DC setting upon Saudi’s enemies for the past forty years has created a near biblical purging of the Middle East. The moderates are being wiped out and this whole middle region of Asia is boiling in blood as America stokes the fires. Madness prevails among evil men who thrive on stealing money, any way they can steal that money.

In Lebanon the stronger than ever Iranian hardliners since the death of the JCPOA will be supporting the militant group Hezbollah and causing more trouble for Israel.

All the while the people of Iran got sick.

Tehran paid no attention until it got out of hand. Iranians were  infecting all their neighbours so the neighbours called Tehran on this.

While he was planning more retribution for the Soleimani murder, Khamenei wasn’t told the whole damn country was falling apart. Sure he heard about the 45% turnout in the recent election nobody cared about, and the 1,672 people the troopers killed during the protests, but nobody mentioned that the country was infected with a vile pneumonia spreading like the plague since last Fall. He didn’t even know that his countrymen had shot down a passenger airplane. Why would he care about people coughing and sneezing?

It’s not that they did not care or that they are not well enough trained, medical professionals in Iran were thunderstruck and overwhelmed by the volume of patients. Everyone got sick. Doctors, nurses, administrators, medics, ambulance drivers, everyone who came in contact with COVID-19, became a little ill. Many got worse.

People who love people are forever meeting new people. Infections  spread among those people who cared most about each other. That’s sad.

They are religious worshippers. Shiite Muslims are a peaceful and loving community who travel long distances to meet one another. The spreaders are caregivers, doctors, nurses, lovers and other strangers doing good for their fellow man. They all got sick. Many will die. Many will suffer without much in the way of medications to relieve pain or mitigate symptoms.

Who will care for them?

This would be a good time for the Iranian patriarch to step up.

Iran’s greatness may unfold as the nation’s best and its brightest are allowed to do their thing with Tehran’s support and leadership. Free the political prisoners, the doctors, the human rights protectors and the journalists.

Take a different approach, Mr. Khamenei, one that is inclusive of those who honour and protect humanity.

Fortunately there was Dr. Li Wenliang, a beacon of hope and a reason for confidence in the human race. 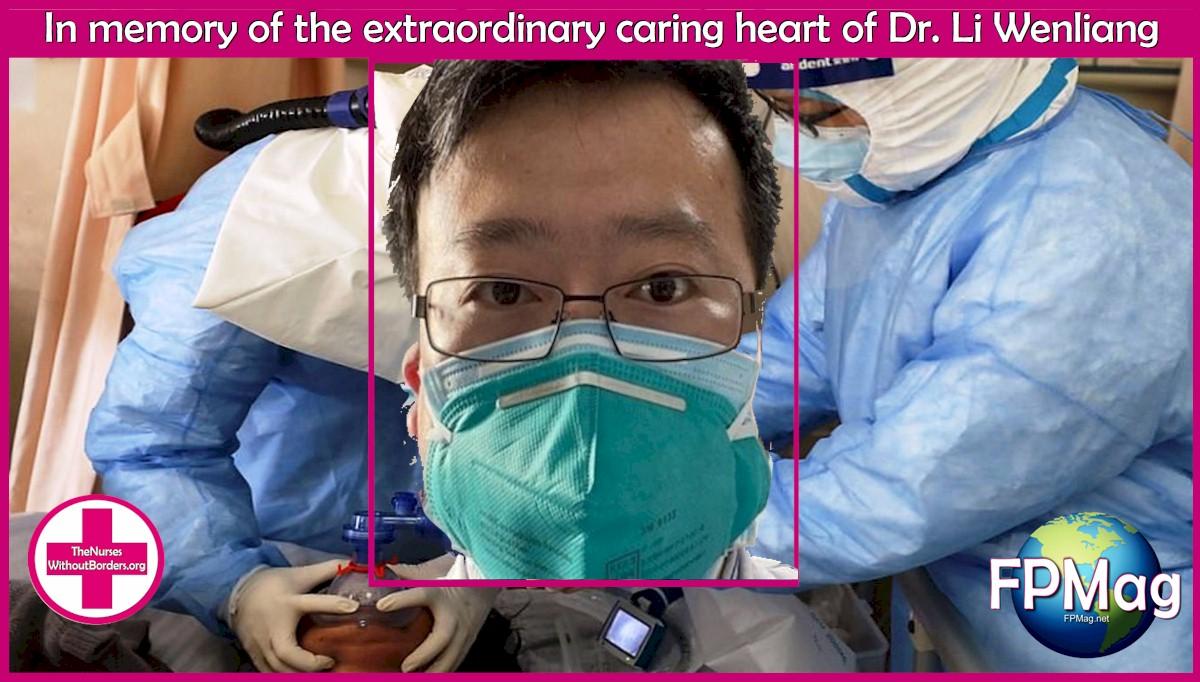 To Li Wenliang’s family, colleagues, friends and countrymen, we humbly offer the thought that on your own territories and from many other even faraway shores, the same kind of like-minded warm-hearted people share your grief, love and prayers. Dr. Li Wenliang is gone, but never forgotten. Nor are you forgotten. We stand with China. We stand with Wuhan.   … Editor and the staff of FPMag and Partners