Landmines, naval incursions & racism are Donald Trump policies following his successful legal bid to stay in the White House after being impeached by the US Congress.

(Did Trump just invade Iraq again after refusing to leave when Baghdad’s parliament voted to eject US Troops?)

Donald Trump has been impeached but he will be allowed to stay in office and seek reelection by some quirk of US politics and its extreme right wing partisan Senate.

Following a successful bid to stay in the White House, post-impeachment, it’s as if Donald Trump has pulled out the stops to alienate the United States, now among the most hated countries on Earth. Since the Reputation Institute characterized the United States as the country with the highest reputation drop in 2017, the global view of the USA tanked.

Following the declaration of PHEIC, WHO leaders urged countries not to restrict travel or trade to China.

The first thing Trump did after securing his home in the White House this weekend was finger his nose at the World Health Organization’s emergency regime known as the Public Health Emergency of International Concern (PHEIC ) and slam China with sanctions threats plus issuing orders effectively banning all Chinese from the United States.

Interestingly, the result has been Chinese scientists fleeing America to head back to their motherland.

“If the US had hopes of competing with Huawei, they have much trouble now, I think,” noted Lee Wong about the exodus. Mr. Wong is a Beijing University graduate and Unix programmer for a Chinese smartphone maker.

Chinese members of a global civil society NGO living in America say, “there are indications that an America-wide cult has Chinese/Americans in its sights to now join Muslims as victims of degradation and disdain by average Trump-supporting Americans.”

Bringing Back the Anti Personnel Landmines will rile 164 Nations, part of an anti-landmine Treaty

As world watchers stare with incredulity at Washington DC embroiled in a political Presidential impeachment fight over Trump being caught with his pants down in the midst of bribing the Ukraine President to smash Trump’s 2020 election opponent, “Trump has found one more way to make the globe toss its cookies” says at least five military observers during an FPMag straw poll.

Simon Baldock, an Israeli security consultant and retired member of the IDF told FPMag this morning that the reaction from his contacts to the policy reversal and violation of global will, “especially within NATO, has been swift and full of outrage”.

When we talk about a #landmine #victim, we think well beyond the individual who encountered the mine. Luis, the father of this boy, was victim of a landmine in #Colombia. The impact of a landmine blast has consequences that can last well into future generations. pic.twitter.com/pzkHiNdOvz 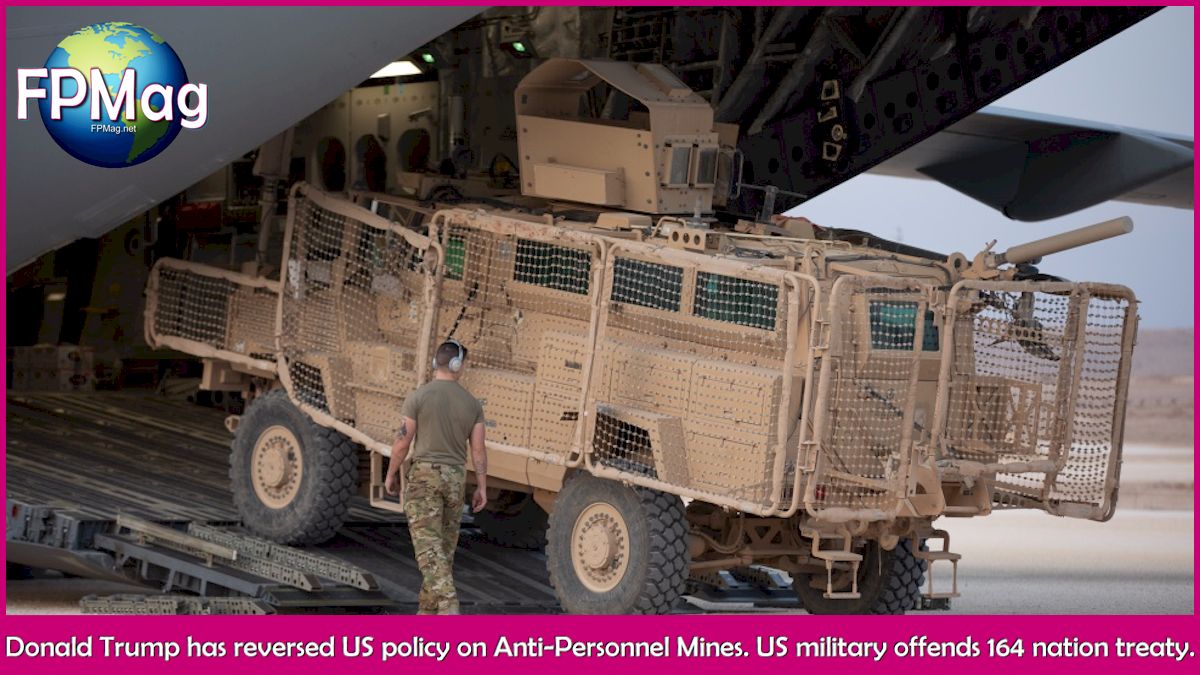 The Convention on the Prohibition of the Use, Stockpiling, Production and Transfer of Anti-Personnel Mines and on their Destruction, known informally as the Ottawa Treaty, the Anti-Personnel Mine Ban Convention, or often simply the Mine Ban Treaty, aims at eliminating anti-personnel landmines (AP-mines) around the world. To date, there are 164 state parties to the treaty. Photo by Staff Sgt. Joshua Hammock Combined Joint Task Force – Operation Inherent Resolve
Photo Art/Cropping/Enhancement: Rosa Yamamoto FPMag

There are four significant new features of US policy outside impeachment and the insistence of the government of Iraq that the USA get its troops out of their country; plus the urging of the United Nations that America return the Diego Garcia nuclear base to the people the USA and Britain stole it from.

“Let’s be totally honest,” quipped Baldock, “this is Donald Trump exciting his base of right-wing extremist Americans who favour white supremacy policies; a strong and aggressive military; and ridding America and the world of Muslims,” said Simon Baldock.

“This cult-like group comprises enough voters in  America to put the impeached Donald Trump back in office. He just needs to get his “voters” to leave their stills in the Kentucky hills and stumble down into a voting booth on November 3rd; crawl out of their trailers and hitch a ride to their polling station, without their assault rifles in hand, and vote for Trump and do a MAGA war cry.”

1. The US $800 Billion Per Year military will now again start using anti-personnel landmines around the world.

#US announcement today on reconsidering 2014 #landmine policy-cause for concern. With 164 countries on board, the ?@MineBanTreaty? has been immensely successful in reducing #landmine casualties since 1999. @minemonitor https://t.co/hu78B3P9Su

3. The United States is exploiting the 2019-nCoV outbreak in China by assailing the island waters occupied by China in the South China Sea. China is not ignoring this unwelcome intrusion.

4. Despite the Iraqi Parliament ordering the expulsion of US Forces from its territory, Trump said he will stay and that he wants to put Patriot missiles  into Iraq as well.

China says USS Montgomery harboured ‘evil intentions’ on Lunar New Year voyage in the midst of perhaps the worst epidemic to hit China in over a century. 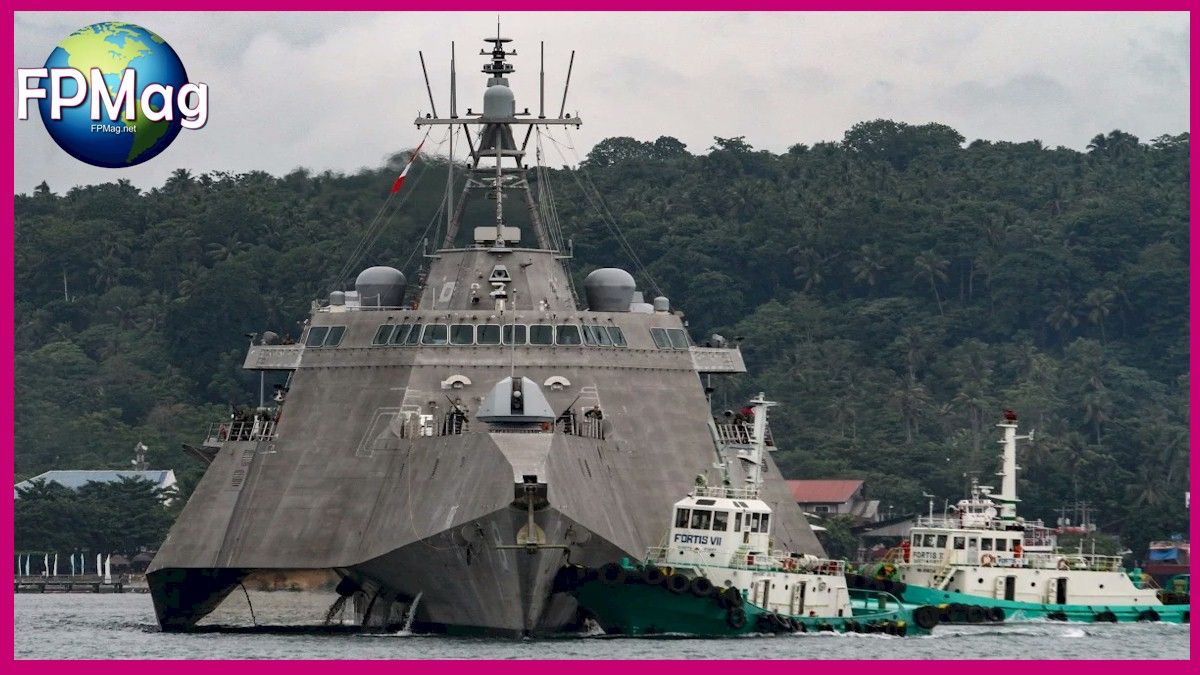 US Antagonizes China, Vietnam and Taiwan with war-measures during monstrous Humanitarian Crisis imposed by 2019-nCoV 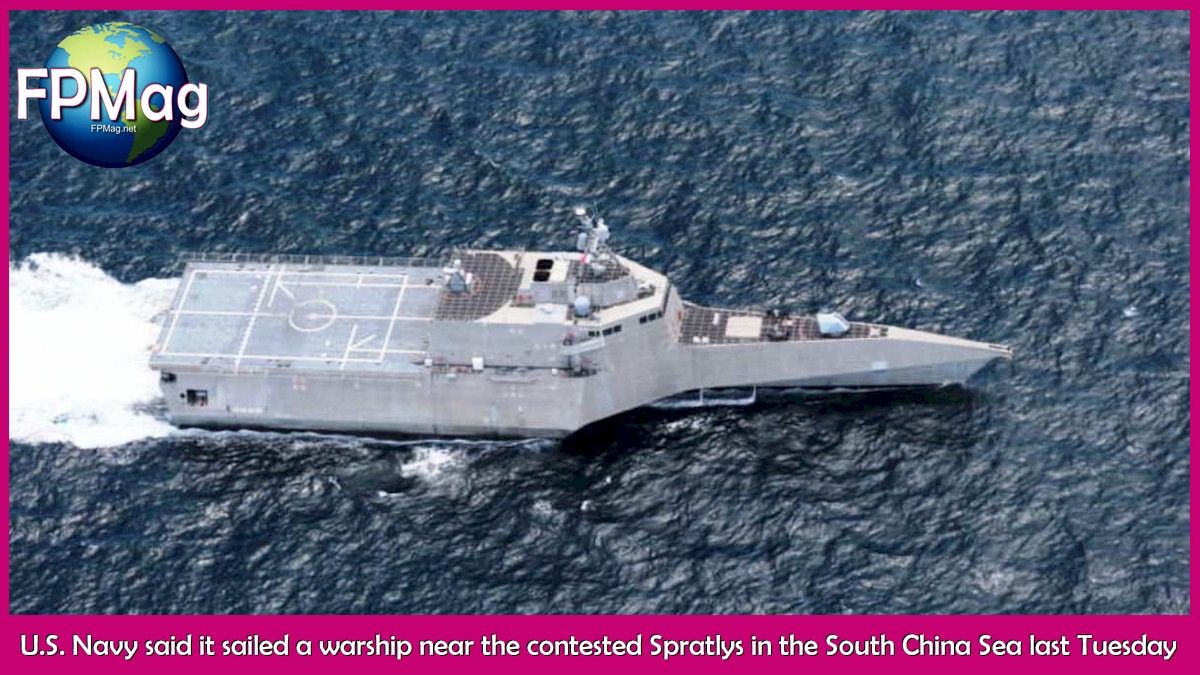 But the big news is that Donald Trump has reversed the 6-year-old edict that the United States would stop planting landmines around the world.

Meanwhile, according to the ‘The International Campaign to ban landmines”,  “the Mine Ban Treaty is one of the world’s most widely accepted treaties: over 80% of the world’s countries are states parties to the treaty. There are currently 164 states parties. Only 32 states remain outside the treaty, but most of them do not actually use or produce antipersonnel mines.”

Mines Action Canada is shocked and deeply concerned by the Trump Administrations new #landmine policy which is a dangerous step backwards. 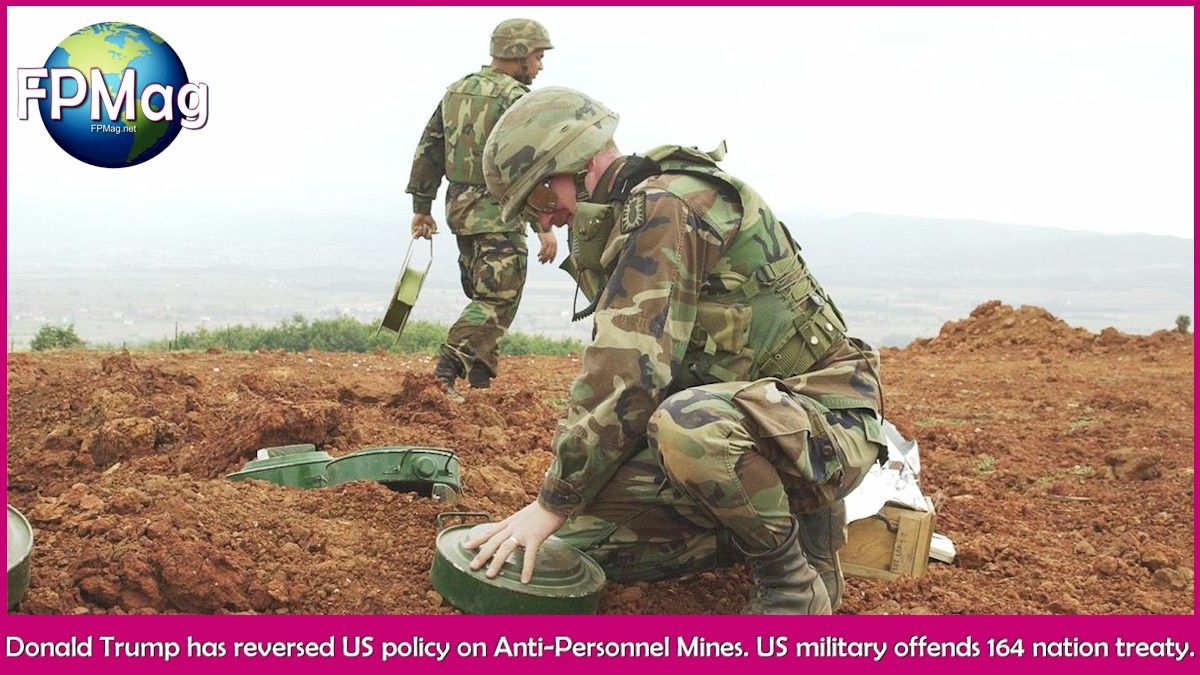