Feminists in Syria Issue ruthless, angry warning. Stop killing us or your head could be a pink mist, like Suleimani.

Severest warning regarding the emergency in Syria. “War criminals Russia, Iran and America must get out of Syria,” FPMag is told.

“Many women try to muster their children to make yet another jump from one dangerous place to another,” a female private security guard tells her protectorate doctor in Syria who is too busy dealing with case after case to hear all the stories of the chaos outside.

“The children time after time abandon their toys, their clothes and friends to flee in the severe cold. They are sick and feel dragged along, not knowing why except for the bombs,” says the protector who carries a modern assault rifle and is covered in belts of ammunition and devices. 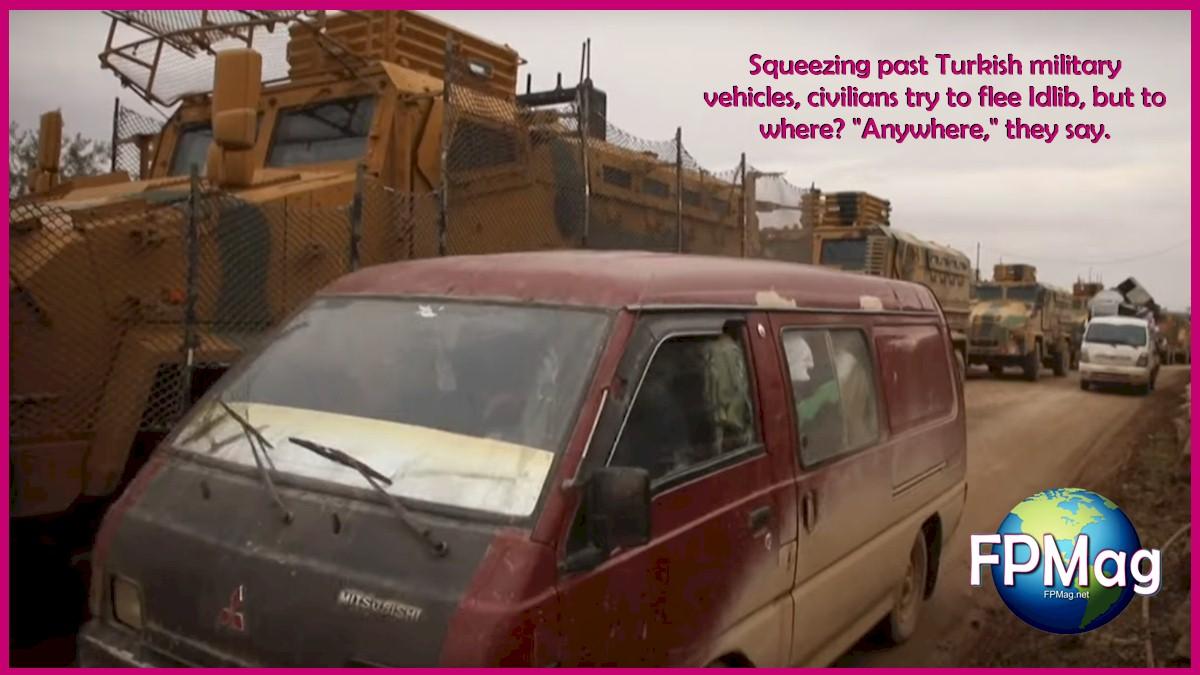 “Some women on the road trundling through the cold, some carrying babies, say they wanted to fight back. They say they, “want to find and kill Bashar al Assad”.

“They think like everyone for eight years,” says the guard named Beverley. “But many have tried and failed. And if they are successful, an Iranian or a Russian from the wings would take his place and nothing would change.”

“That’s nothing new,” the guard continued after returning from a door that needed some attention. “Most everyone in Idlib province must have had that thought. But I am told,” she said, “that these men killing women and babies need to start thinking that women may retaliate by turning the murderers heads into a pink mist,” she continued while nodding.

“We helped a family push an old Lada out of the mud near Aleppo,” said the guard. “A 22-year-old daughter had replaced the mother who had passed two months ago from pneumonia.  The student was back from University tending four runny-nose children while her stepfather struggled with the car. She told me, to tell the [translated] “worms in Damascus to stop killing us or their head could be a pink mist, like Suleimani. Now I pass that on. I think she meant it. I know who she is.”

This writer wanted to learn more, but the time had come to move and file the story first.

Photo courtesy of Kremlin.ru. The most experienced statesman in the world has tried and failed to solve the problem in Syria. Some things went well but in the end, killing civilians became too easy and the impunity too much believed. Instead, Vladimir Putin’s military has been led into a thread of immoral and illegal conduct that puts enough shame on the Kremlin to destroy its long rein. The only way ahead is to admit the failing and withdraw while working to facilitate humanitarian relief. The alternative is an imposed end to the Kremlin as it is known today. Many Russians, even soldiers, say this is all completely, “Nepravil’no!”

“The presence in Syria of these nations must come to an end,” said one of the women doctors who was scrambling to save every single instrument and device for providing patient care.  “Syria and its neighbours  need to sort out the crisis without militaristic patriarch malignancies,” she continued. Russia, Iran and America must get out of Syria and Iraq,” she added with finality.

“There is a movement that began in Iraq. It says that all these men are doing is killing women and children of each others’ side. Well, the women are going to fight back. You will soon see.”

This writer had worked here a time long ago, it seemed, but was reposted to Yemen. Back now in Syria to help with the second evacuation, the exhausting work had been done and the women were in their cave, sorting out the last things they used.

Russia’s effort has fallen into disgrace.

There was a time when Russia’s participation in Syria even made sense. The Kremlin clearly thought so. But deliberately bombing hospitals, clinics, ambulances and anyone wearing white is on the Russians as much as it is on Bashar al Assad. Killing half a million women and babies is going to have an accountability like never before. This is a crime capable of substantial proof.

The women are promising revenge. Something has “snapped”.

On 3 January the United States set a new standard in dealing with what it claims are malignant actors. One needs to ask the question, what stops others from using a sniper rifle or a drone?

What will be the outcome in a world wherein now only “righteous indignation” provides impunity for the murder of 12 souls in Baghdad at 1:00 am on 3 January? None, apparently.

“Is it OK therefore to assassinate men who slaughter millions of our sisters and our babies?”

Causing the continuous displacement of civilians, more than 800,000 this month, is beyond being a war crime, it is the work of psychopaths.

“What’s worse, is that these men are slaughtering unarmed, vulnerable women and children. They are not fighting ‘terrorists’. They are murderers and liars,” says nurse Gracie Edwards who has been treating patients in Iraq and Syria since 2013.

“You are the big powerful Russian Army killing babies? You are cowardly pigs and chickens. I slap your face with my dirty wet socks, and I call upon your mothers, sisters and girlfriends to hold you to accountability for killing women and children,” says a broken nurse, standing beside a busted truck with flat tires on the side of a shattered road near Aleppo.

82% Of the medical people killed in Idlib in the past 28 months were women. Most of the women and children in Syria have been made sick; injured; bombed; strafed; gassed; dislocated or killed by the criminals who have run the war in Syria as shown in this image. 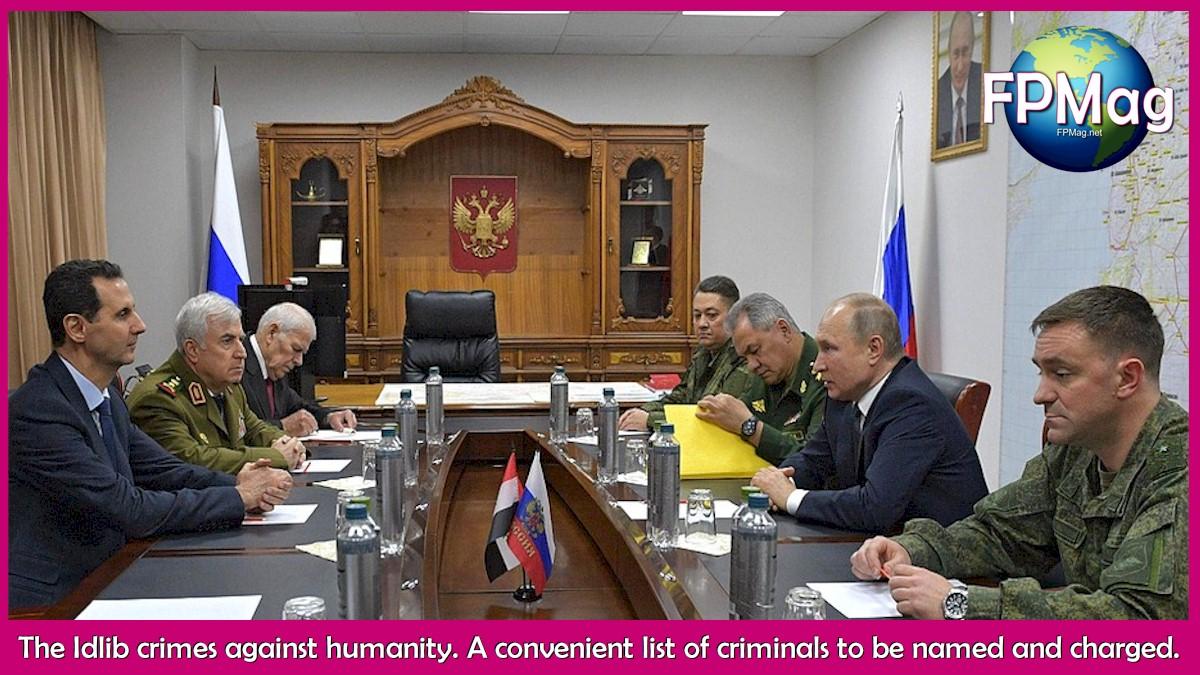 82% Of the medical people killed in Idlib in the past 28 months were women. Most of the women and children in Syria have been made sick; injured; bombed; strafed; gassed; dislocated or killed by the criminals who have run the war in Syria as shown in this image. Photo courtesy of Kremlin.ru.

Consequently, women will prosecute the war criminals in Syria.

“Every women on Earth is called upon to take action,” says the doctor.

“They must do whatever it takes to stop these men from harming or killing another vulnerable woman or child,” says the guard.

“That includes wives, sisters, friends, mothers. Stop these horrific crimes against humanity by stopping these men. They must not go to work again. All they do is commit crimes. Being told of these crimes makes everyone who acquiesces to criminal conduct an accomplice. The soldiers want to go home. They know this is wrong.”

“Meanwhile, injects the doctor,  “another feminist plan of action is being constructed to arrest the parties and bring them to the Hague. If any person resists arrest they will be handled with the required force to stop their murders and facilitate their incarceration and appearance before a court of suitable jurisdiction. Nobody is going to like this next step. It would be better to go home. Leave Syria.” 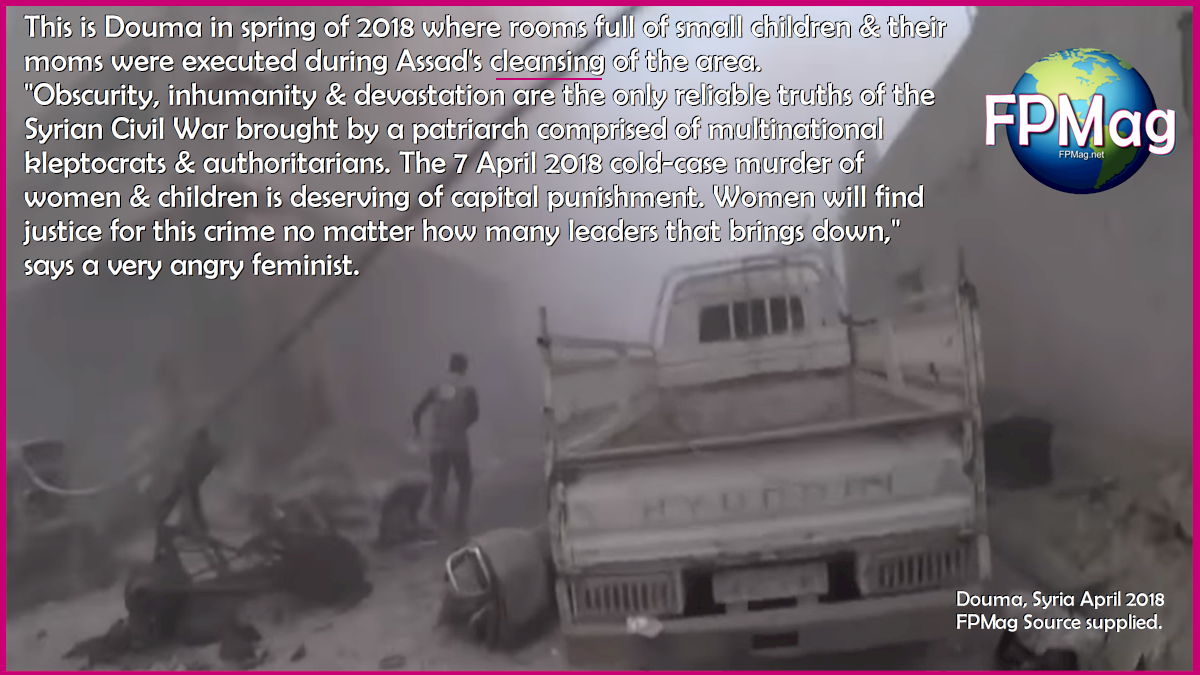 This is Douma in spring of 2018 where rooms full of small children & their moms were executed in a chemical attack during Assad’s cleansing of the area.
“Obscurity, inhumanity & devastation are the only reliable truths of the Syrian Civil War brought by a patriarch comprised of multinational kleptocrats & authoritarians. The 7 April 2018 cold-case murder of women & children is deserving of capital punishment. Women will find justice for this crime no matter how many leaders that brings down,” says a very angry feminist.

Read about some of the war crimes:

“There are plenty of survivors to tell the tale and prove the crime. Get out of Syria or face prison. Leave Damascus while you can,” says a Syrian woman doctor.

Building an alliance with Bashar al Assad was a huge mistake for Russia and Iran. That is sad because the Russian intentions from the outset were probably good intentions.

Many of the peacekeeping actions of Russian soldiers were admirable. Did those valiant peacemakers act on their own? Many Russian officers and soldiers acted with good will and good intentions. Others commit extremely serious crimes or covered up the Assad regime’s very serious crimes.

Investigator and guard, Beverley Baldock says she has “very significant Russian witnesses now out of harm’s way and willing to testify about what happened in Douma”.

America has commit Heinous Crimes in Syria using children to fight ISIS and killing hundreds of kids and thousands of Kurds.

America is also guilty of crimes against humanity in Syria. Its use of child soldiers to fight ISIS is just a starting point. America must get out of Syria. Hanging around to steal oil is the ultimate arrogance. He who boasts of that needs to stay hidden. That’s tough because an election campaign is in the wind at the same time as the entire world hates the White House for its crimes.

This writer knows many families in Yemen with a bone to pick with the man who gave the order to bomb a school bus on 9 August 2018. 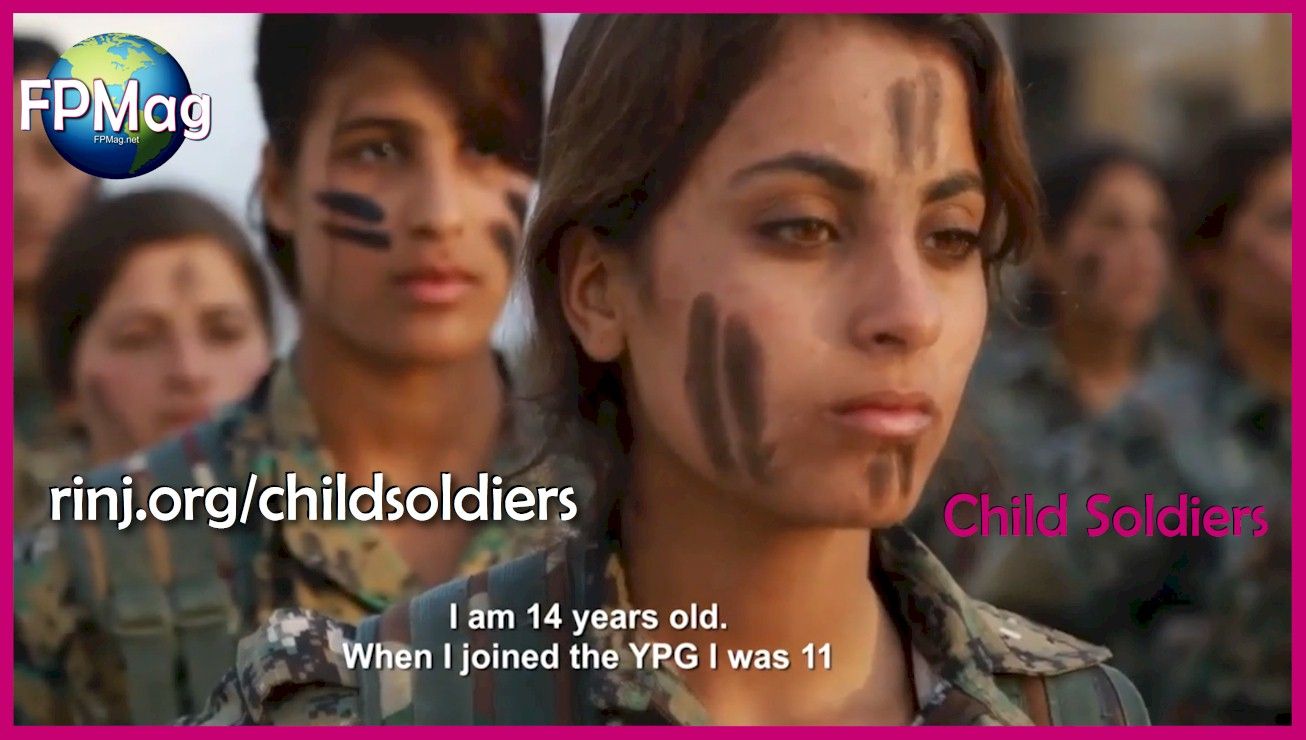 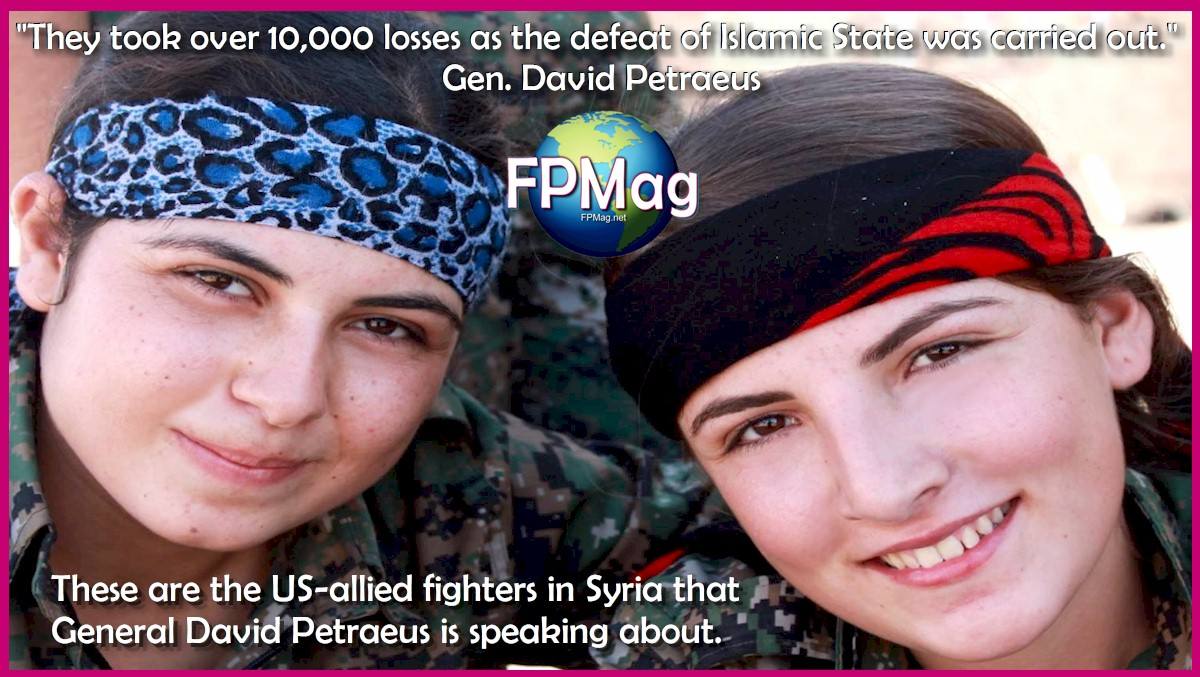 General David Petraeus is alleged to be a war criminal far worse than anything the Americans claim General Qassem Suleimani ever commit.

Watch the video. American child soldiers did the heavy work for America. They toppled ISIS, not America. They did it at a huge cost in lives.

When Trump says he defeated ISIS, Donald Trump is telling outrageous lies to whitewash one of his own war crimes. He must be brought to justice not only for telling whopper lies to cover up a crime but for the crime itself causing the deaths of child soldiers to benefit his own political career.

Russia and Lebanon, Iran and the Assad regime must face charges. They will. No amount of guns and bombs will change that resolve.

The article " Feminists in Syria Issue ruthless, angry warning. Stop killing us or your head could be a pink mist, like Suleimani. " was written by Author: Behar Abbasi (Biography, Email) Staff writer and FPMag correspondent for Yemen, Syria and Iraq. She is also a Registered Surgical Nurse.
Contact Behar Abbasi on Twitter ~ Facebook