Each COVID-19 statistic represents a human life, a family’s heartbreak. Each number has a face.

Trackers of COVID-19 say, “Do not forget humanity.”

“Every life lost to the new coronavirus is an enormous pointer to the fact that humankind spends far too much money on weapons and war,” lamented ‘Vertigo‘, a mercenary working as part of a private security team escorting medical supplies from Colombia into Venezuela for a RINJ Foundation nurse-led clinic and some faith-based hospitals. 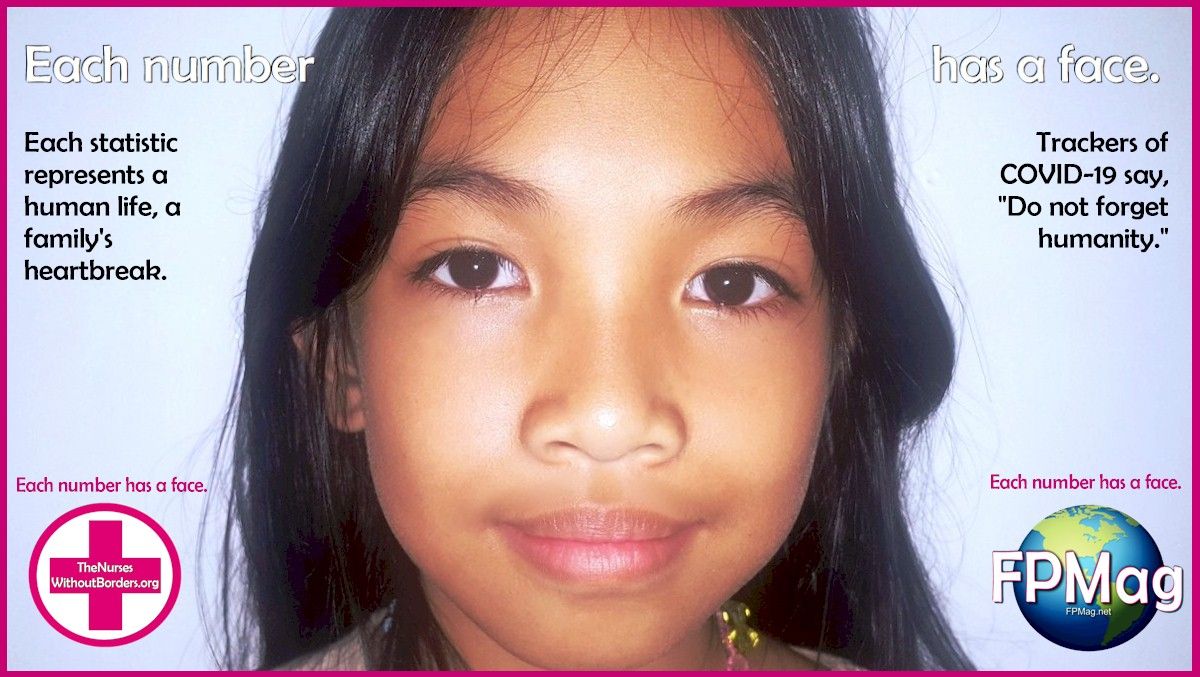 The picture and its story: “Each number has a face.”

Venezuela has received the diagnostic kit for the COVID-19 strain from the Pan-American Health Organization (PAHO). The kits are available to practitioners who make the effort to obtain them from other sources as well.

Venezuelan Minister of Health, Carlos Alvarado, confirmed hours ago that there have been no Wuhan novel coronavirus cases in the country and further states that the nation is conducting “careful entry control at the Maiquetia International Airport”.

Venezuela’s constitutionally mandated President Juan Guaidó said in an op-ed article a year ago that the scurrilous dictator Nicolás Maduro and his military junta were to blame for the “Health system’s collapse”. He also said that “a growing number of children are suffering from malnutrition, and previously eradicated illnesses have re-emerged.”

Nurse Francis, heading a large medical clinic in a busy area in northern Venezuela says that President Guaidó is correct but things have grown much worse.

“Even people who were once local gangsters are now humble contributors to society working to help their fellow community members survive chronic illnesses that normally are easily treated if medication is available. Volunteers take elderly out for walks and bring food and clean water we make in our water purification pumps from the well. Our overland trips with meds save lives with every kilogram of pharmaceuticals that we can carry, especially the meds needed for chronic ails like children’s asthma needs and adult diabetes and chronic heart diseases like hypertension.”

“Far too few resources are spent on developing solutions for fighting microorganisms,” says nurse Michele Francis on WhatsApp as she meets a supply convoy in a small city in the Amazon basin.

“Political corruption and stupid weapons purchases. Why does this country need expensive Russian jet bombers when the infant mortality rate is at 25 dead babies per thousand live births,” exclaimed the humanitarian nurse. “I could smash his face every time a baby dies during childbirth to a malnourished mom,” she added, referring to the onerous dictator, Nicolás Maduro, whose extrajudicial killings and commandeering of the military as drug cartel soldiers has angered the entire planet.

“Every time I hear of a baby or mother dead at birth in the rural regions we cannot reach because the mother was malnourished I am reminded of Nicolás Maduro eating like a King in a palace while Venezuelans flee in the millions or starve in the millions. Doesn’t this criminal have any kind of heart, after seeing what he has done?”

COVID-19 In South America is Not Discussed Seriously

“We have some pneumonia cases here,” the nurse practitioner explains, “and some that present as if they could be the Wuhan coronavirus but we treat them as pneumonia and because we do not have good labs available in the north, we hit them hard with a powerful antibiotic to fight the pathogenesis of acute bacterial pneumonia, something that follows influenza in this region in the elderly and in children. We use one of the same antibiotics we use for treating some STDs, so we have a good supply. If the patient has had diarrhea or shows signs  of dehydration ‘we throw a ringer into them‘  [IV] when that’s indicated and give them plenty of bed rest and oxygen support if indicated by breathing difficulty. We have not lost a patient with lower respiratory issues so we likely have not seen the COVID-19 yet.”

She adds, “We are close to our community and fight for every single drop of life “

“For two weeks we had no anti inflammatory medications and my heart was breaking for some families who had arthritis sufferers. Today we have plenty of what we need in many forms. This is a good day. No, it is a great day,” Nurse Francis reported as she rang off to finish her work.

Question: Where would mankind be if the trillions of dollars spent annually on things that kill us, were spent instead on healthcare and medical research?

“That’s what we should all be thinking about,” says Jessica Williams, another nurse team leader who is currently traveling but sitting for a few hours in a flight lounge waiting for a forwarding connection.

“But that kind of heaven we can only dream about,” she answered. I can just imagine never having to give a mom bad news, only good news, about her babies’ health.”

“A medication for treatment of viruses is long overdue,” notes Monique Deslaurier, a nurse practitioner who now works extensively on the RINJ HIV ‘Test and Treat‘ project.

“HIV/AIDS research results should have been available to save Freddie Mercury’s life before 24 November, 1991. It could have been, if we hadn’t spent ‘gabillions’ of dollars on militaries.” notes nurse Deslaurier.

Sara Qin in a Wuhan hospital was [translated literally] “trying to sleeping on a desk” when FPMag dialed in on Tencent QQ from Shenzhen, in southeastern China. “We will talk later,” we answered. This upbeat nurse has been fighting for every patient to make a good recovery. She says many have a very good outcome in her section and they try to get to know each patient if they don’t already, “and get them just bouncing back to normal with a few kilograms weight loss,” she said last week. Qin is very much in touch with humanity and the globe is witnessing more of that as readers can learn by watching the  Xinhua video featured in this article. But first, here are the hard facts.

Here they are. The heartbreaks:

These COVID-19 data will continue updating automatically with each refresh.

Important: Belgium, Cambodia, Finland, India, Nepal, Philipines, Russia, Spain, and Sri Lanka have been removed from our list. In each country there are no longer patients reported as infected with COVID-19.

*The Chinese are focussed on identifying only severe cases. It is possible that there are as many as 50,000 new cases each day in China says Professor Neil Fergusson of the Imperial College of London. The vast majority of these cases look like a mild version of the common cold, he says.

*The Chinese government admits that there are hundreds of thousands of other possible cases. The effort that is made to report the numbers of significant COVID-19 lower respiratory (pneumonia) cases and their outcome is extremely important and nobody FPMag is talking to sees that any other way. We trust our sources are doing their level best to state the true facts.

Most cases have a very good outcome. But when 1,716 medical workers fall ill because of insufficient flow of safety supplies needed to treat hundreds of thousands of confirmed and suspected COVID-19 cases, the outcome of patients is challenged further. What went wrong with the international community? Maybe it was just initial inertia, or maybe China should have got the word out earlier. Hopefully the world will step up now that as one humanitarian said with vigour, "China needs our help."

They became ill because they were under equipped to cope with the most massive epidemic in modern times. Those left on the front lines need help. They need supplies. "Where are the airplanes delivering these donated goods going to land. It's the donor's choice," suggests the petite nurse in Wuhan, speaking in Mandarin.

The following sources are available to readers. Additionaly FPMag and The Nurses Without Borders make direct contact and interview colleagues and sources close to the information around the world to track events and statistics.

Watch: A very cheerful thank you from the Chinese People 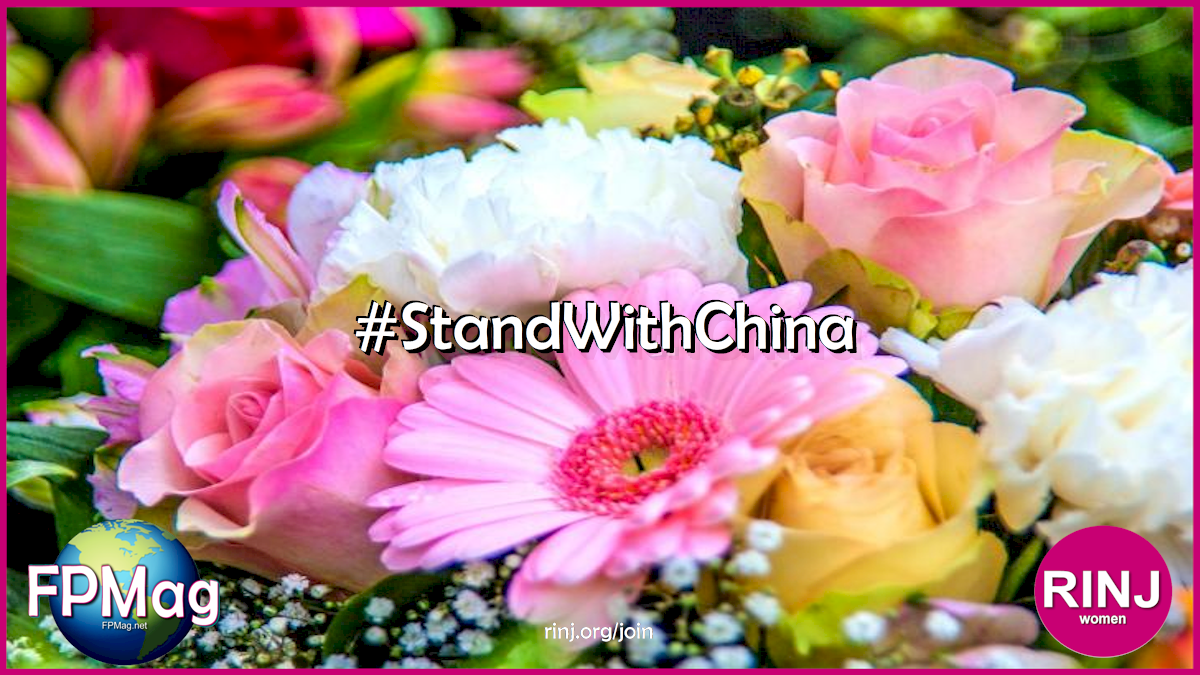 Feminine-Perspective Magazine and its partners are asking the whole world to #StandWithChina and to #PrayForChina.
This is the better way to think.

The article " Each COVID-19 statistic represents a human life, a family’s heartbreak. Each number has a face. " was written by Author: Micheal John (Biography, Email) Editor in Chief and Publisher of FPMag.
Contact Micheal John on Twitter ~ Facebook ~ LinkedIn ~ Instagram ~ Find on Wikipedia ~ Find on YouTube