Russia has taken a leading role in solving the multitude of conflicts in Syria and pointing the country to a peaceable calm wherein Syrian refugees will be confident that coming home will yield safety and a reasonable opportunity to resume healthy family life. 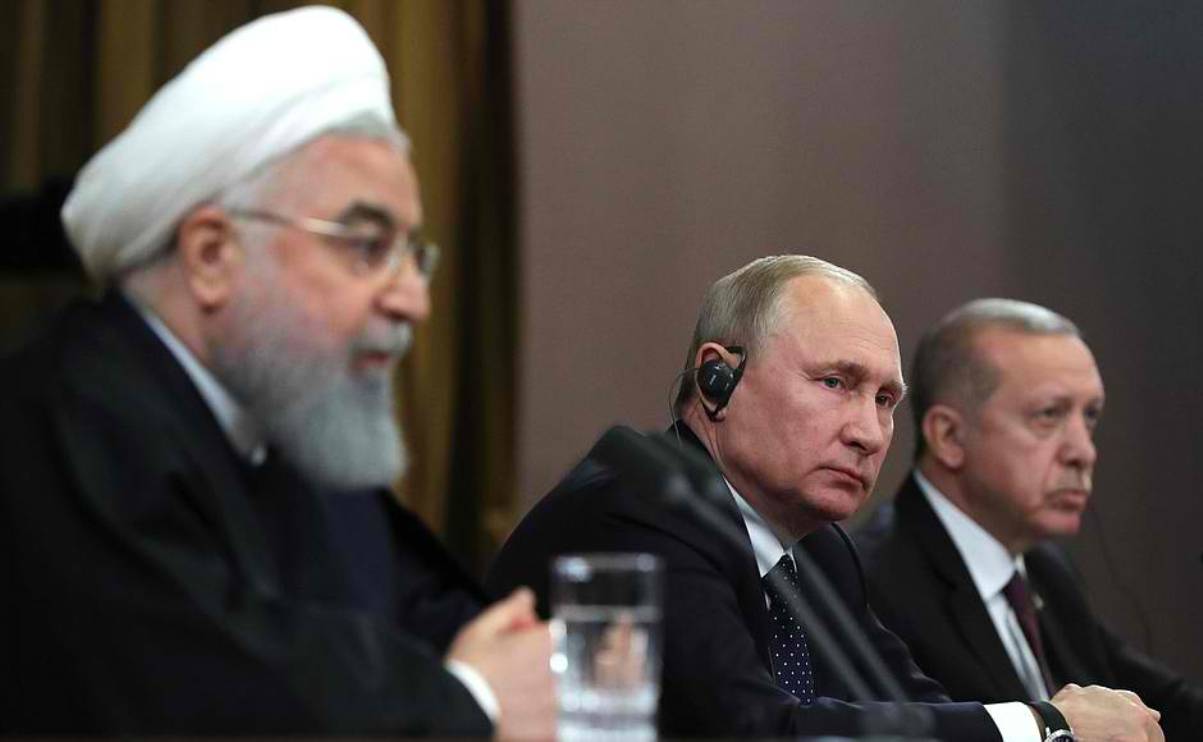 The guarantors of the Astana process (ensemble of initiatives and plans to resolve the Syrian Civil War) for facilitating the Syrian peace settlement.  Here you see the three heads of state during the news conference following the meeting between the presidents of Russia, Iran and Turkey. Photo Credit: Kremlin

In Sochi, Russia, the 11th summit held by the guarantors of the Astana Process (ensemble of initiatives and plans to resolve the Syrian Civil War)  concluded yesterday.

While three heads of state held their own meetings, delegations from the guarantor states, Syrian parties, the government of Syria, the opposition and representatives of the United Nations worked on resolving issues.

There are difficult problems to solve and they are getting much attention.

Both Iran and Russia joined to stand firmly against Turkey’s narrative about dealing with threats to its people from across the Syrian border.

While Turkey points out that separatist Kurdish militants have infiltrated Syria’s Kurdish region just south of the Turkish border,  Iran and Russia strongly urge Turkey to accept their promises that the security of the border will be preserved by the coalition that Russia leads. They also told Turkey not to invade across the border without the express permission of Syrian leader, Bashar al-Assad.

Listening to the parties speaking, Mr. Putin and Mr. Rouhani, it seemed not so much by words but by the tone that al-Assad’s permission was as unlikely as an alien landing.

Clearly, Russia’s lead in this matter of global importance is a significantly calming piece of diplomacy. The interest and concerns of America are skillfully handled as well as those of the Kurdish militia units in Rojava.

Also America has sliced off a niche in the process which was to lead a coalition to put the Islamic State terrorists out of business in Syria. While the remnants of ISIS are substantial and scattered to the wind, their presence may well be a matter for Syrian law enforcement and not Militias or Armies. That of course is to the credit of US service men and women and the Kurdish land forces the US has trained and armed, notes several of  The RINJ Foundation  volunteer medical workers in three locations of the country.

“The Kurdish groups have fought effectively with the help of America to rid the region of ISIS-controlled pockets wherein the population has been hijacked, kidnapped, bullied and even in thousands of cases, slaughtered,” says one such doctor.

Even though Mr. al-Assad was not present, (as far as we know)  at the trilateral talks in Sochi, Russia, from the tone of Mr. Rouhani and Mr. Putin it would seem that Damascus holds the Kurdish people in Syria in great esteem and that they should be able to reconstitute their self-governance. The situation is fluid and nothing is cast in stone, however.

Consensus: Terrorists must be removed from Idlib.

The Tahrir al-Sham (HTS) group of terrorists are widely reported as more violent and extreme than their sources of membership including al-Nursra, al-Quaeda and the Islamic State. Local observers confirm this to FPMag .

HTS rule over Idlib has created pandemonium for the international humanitarian community. Funds for the purchase of medicines have dried up because donors fear that the HTS is commandeering supplies. Those fears are apparently warranted.

Doctors and nurses in about four dozen medical facilities are starving, says Behar Abbassi, who recently returned from doing a medical-needs assessment in Yemen to help with an evacuation of medical staff and critical care patients in Idlib, Syria. The only health care that is reliably available to the public, says Ms. Abbasi is that offered from obscure, long-established practitioners who really aren’t taking on new patients for security concerns.

Behar Abbasi reports that the conditions in Idlib make the region unsafe for any normal citizen.

Since 2011, humanitarian workers in Syria have been chased all around the country by terrorists and the violence of war.

One of the most surprising things most observers of the current regional battles report is the large numbers of embattled civilians still living under oppressive conditions. When they emerge after their communities have been liberated by American and Kurdish forces, as has been happening often in the past week, they are both large in number and devastatingly impacted by trauma and lack of health care and nutritious food.

It is no less true for being obvious, terrorists must be removed from Idlib and all of Syria.

The presence of Iranian troops in Syria is most worrisome at this time. Iran is the “elephant in the room” and there is little value in ignoring that fact although it continues to be ignored that Iran’s presence in Syria with thunderous military assets is seen as a threat to Israel.  This is a recipe for disaster say a growing number of analysts. 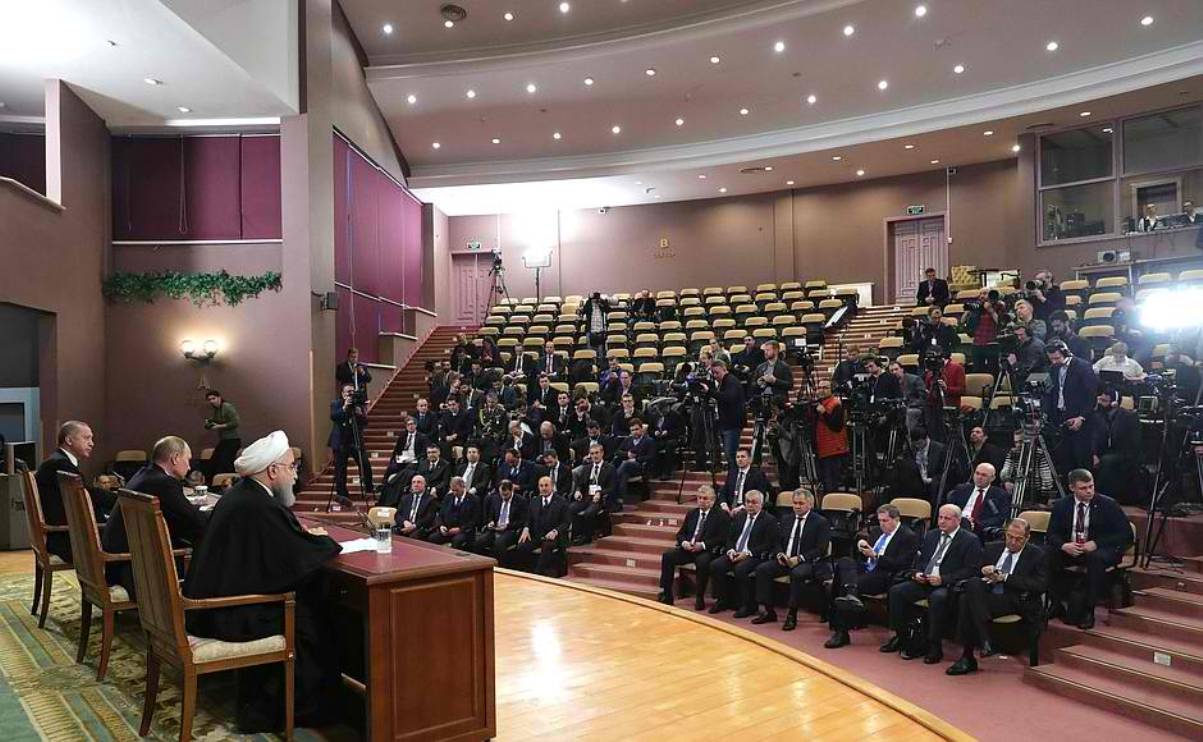 The guarantors of the Astana process (ensemble of initiatives and plans to resolve the Syrian Civil War) for facilitating the Syrian peace settlement.  Here you see the three heads of state during the news conference following the meeting between the presidents of Russia, Iran and Turkey. Photo Credit: Kremlin