Hang on to your hat. Trump is right about Venezuela. Maybe the Wall too.

This coming weekend, 23 February, tons of humanitarian aid stocks in the form of food, medicine and clothing must be distributed to the most needy in Venezuela. Lack of food, water, medicine and functioning hospitals are killing Venezuelans daily according to a woman, Dulce Perez (38) who spoke to  NPR’s Eyder Peralta in Caracas yesterday. 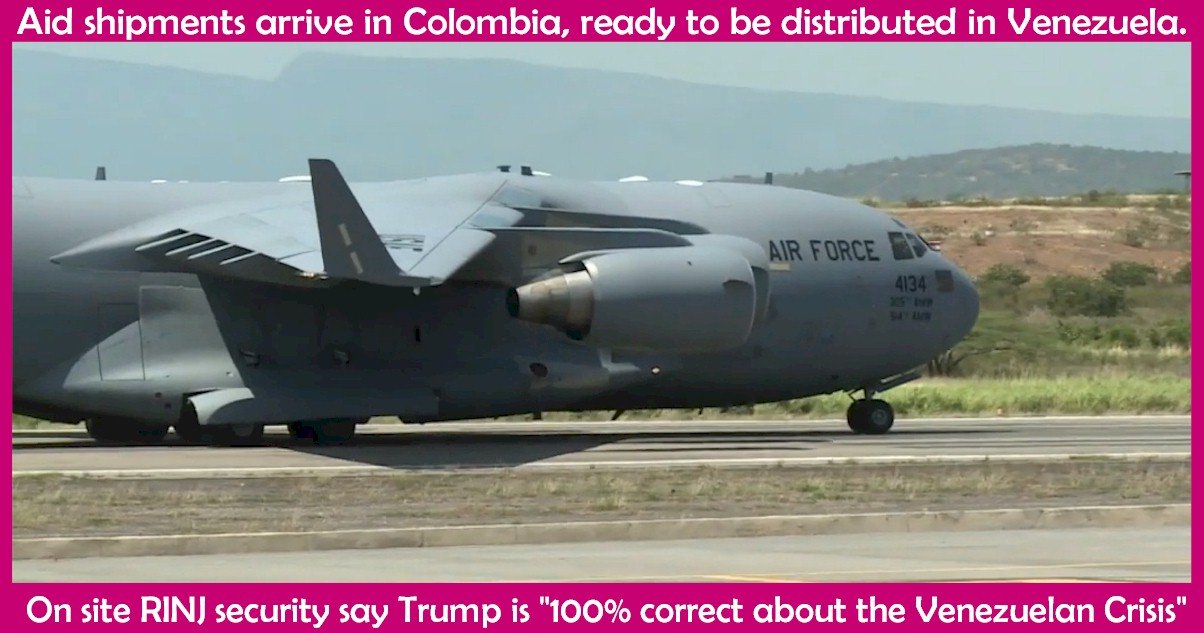 The Venezuelan volunteer coordinator for The RINJ Foundation  volunteer workers has reported that an alert was sent out to all volunteer women yesterday to poll those who can meet together and be prepared to assist in the distribution of thousands of tons of food arriving from Colombia. Apart from the actual mechanics of distribution, the goal is to reach representatives of communities in dire straits so that everyone in need is heard from and is added to distribution lists of the appropriate materials.

Recently, an agent who works for RINJ’s security team reported that the Vice President of Venezuela has been engaged in criminal activities that include the sale of Venezuelan passports to Middle East actors who may be terrorists. The numbers are reported to be in the thousands. Some of these persons have been observed traveling through Colombia and in some cases apprehended. FPMag is working in this story.

This adds to the speculation on why Nicolás Maduro clings to power without any legitimacy and all the while that the constitutionally-appointed leader of the Venezuelan General Assembly was sworn in as President of Venezuela on 23 January.

It also adds to the concern about threats against North America from actors channeled through Venezuela to the profit of Maduro and his henchmen, representing a danger to North America. The scope of the problem makes it such that it cannot be ignored. Likely the Trump Administration is fully briefed, say RINJ security staff.

Concomitantly, some of  the information coming out of Venezuela may support Trump’s assertions about a requirement for greater border security. A number of recent observations support some of the assertions of terrorists transiting from Mexico to the United States by the US President which have come forward in a language style unfamiliar to typical security specialists, says one expert who prefers not to be identified for obvious reasons.

Women say ‘he may be a Kid President as Maduro claimed but he is the world’s kid’. Art by Feminine Perspective’s Rosa Yamamoto: Cropped and Retouched Photo of Pres. Guaido, Original by AFP

In the meantime, the most important aspect of the Venezuelan crisis is the urgency for helping those in dire need of food and medicine.

US President Donald Trump and his National Security Advisor have both threatened that the ground security forces loyal to former despot Maduro must support the constitutionally-appointed interim leader of Venezuela.

Unfortunately, but as often happens, US National Security Advisor John Bolton reached five hours ago for a scurrilous low in his conduct and threatened the women and children of Maduro ‘cronies’ who allegedly “live lavishly in Europe and the Caribbean”.

President Trump highlighted how the families of Maduro’s cronies live lavishly in Europe and the Caribbean, while Maduro issues orders to impede humanitarian aid for Venezuelans. We know who and where these officials and their families are.

The article " Hang on to your hat. Trump is right about Venezuela. Maybe the Wall too. " was written by Author: Katie Alsop (Biography, Email) Staff Writer Feminine Perspective. FPMag correspondent for the Middle East and Europe.
Contact Katie Alsop on Twitter ~ Facebook ~ Find on YouTube