While researching for the 6 December National Day of Remembrance for the 14 women who were killed, 6 December 1989, at the L’école Polytechnique in Montréal, Canada “for being women and for being students in a discipline that, at the time, was wholly male-defined’, something uglier jumped out of the pandora’s box of violent acts against women.

Women and girls are hit the hardest by the pandemic, suffering from extreme domestic violence increases and no place to hide; and yet it is women-led countries that have fared best against the pandemic virus.

FPMag sat down with a  Toronto-based filipino nurse who is alarmed after speaking via Facebook messenger with her family back home in the Philippines. She wants her family brought here to Toronto. Canada on a refugee visa.

This article includes video shot by FPMag and video shot by Deutsche Welle News (DW News) that some readers may find disturbing and even triggering. This article is about extreme abuse of women and children in the Philippines, and it is only touching the tip of the iceberg.

Gloria de Jesus, says that Philippines National Police (PNP) are “red-tagging“ anyone who criticizes the government of Rodrigo Duterte.

“Maria Ressa, Time Magazine’s 2018 person of the year is in Court today on another charge of tweeting something the Duterte Administration doesn’t like,” reports Karinna Angeles, in Manila today.

Checking into this revealed that the complainant, who says they do not know President Rodrigo Duterte, has a daughter who “recently was appointed to a cushy, high paying job in the Duterte Government”, say people familiar with the matter who were not authorized to comment and requested anonymity, “partly out of fear of mortal retribution”.

“You will not be hearing too much of this because a huge portion of the local news media, ABS-CBN, in the Philippines, has been shut down by President Rodrigo Duterte and replaced with State Television,” Karinna wrote sarcastically on WhatsApp.

“The Duterte government has killed journalists and human rights activists in the dozens, many in the past few weeks, she explains. I must get my family out of our country,” urges Gloria de Jesus, who sat in a chair while I did some quick fact-checks on her story.

“Red tagging”, she says, “means that the government claims that the person who has been critical of Duterte Administration policies is a ‘liberal’ whom they have labelled as a ‘socialist’ or a ‘communist'”.

The Commission on Human Rights follows the definition laid down by the International Peace Observers Network (IPON), which defines it as:

An act of State actors, particularly law enforcement agencies, to publicly brand individuals, groups, or institutions as… affiliated to communist or leftist terrorists.

Additionally, the term has been defined in Philippine Jurisprudence through the dissenting opinion of Supreme Court Associate Justice Marvic Leonen in the 2015 court case Zarate vs. Aquino III (G.R. No. 220028 J. Leonen Dissenting Opinion, November 10, 2015), in which Leonen adopted a 2011 journals’ definition of red-tagging…

…the act of labelling, branding, naming and accusing individuals and/ or organizations of being left-leaning, subversives, communists or terrorists (used as) a strategy… by State agents, particularly law enforcement agencies and the military, against those perceived to be ‘threats’ or ‘enemies of the State.’ (citing Wikipedia)

The definition falls to some extent into Gloria’s understanding: “by State agents, particularly law enforcement agencies and the military, against those perceived to be ‘threats’ or ‘enemies of the State.'”

“Our Vice President is a liberal so she has been red tagged. Vice President Leni Robredo who was elected legitimately by the people as the Vice President to Duterte who was elected by Facebook when it gave free internet data to all Filipinos and then sold many millions of American dollars in advertising to Duterte like they did with the Russians to get Trump elected in 2016, despite a woman getting more votes,” she complained. “You can ask anyone, and that’s what they will say,” she added.

“Leni Robredo is a folk hero and Duterte has everyone terrorized. My father got a survey call and he said ‘Duterte was the best President’ because he thought they would kill him if he gave a wrong answer.”

“Leni Robredo doesn’t even have a budget to buy pencils, and she has been removed from participating in all government administration. Our government has taken all the people’s money, and doesn’t want people like her seeing that, or talking about that,” says Gloria.

“They stole all the PhilHealth Insurance money and cut the hospital budgets by 25% in the middle of the pandemic. The government has not provided nurses with proper personal protective equipment and my sister must buy her PPE from Lazada which takes a long time to deliver so the government added a VAT tax to the PPE that she and the other frontliners buy online,” said the troubled woman who fears for her four-year-old’s life, her little child she left behind in the Philippines with her mom and grandmother because of visa issues.

Fact checking on Gloria’s assertion again bore out her story.

As fantastic as it sounds, Gloria’s anecdotal accounts of life in the Philippines are supported by events of Friday, 4 December 2020. A lot of things were taking place. Murders, demonstrations and Ressa’s court case. 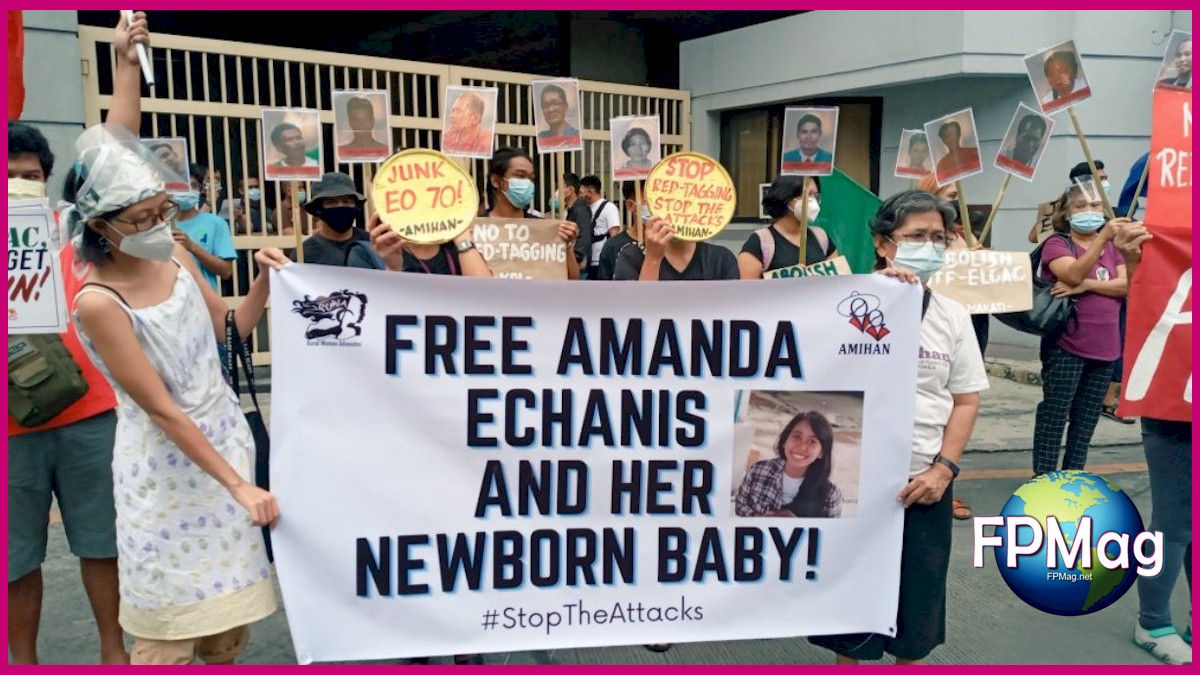 Activists today in Manila are calling for the release of community organizer Amanda Echanis who was arrested on Wednesday. She is the daughter of murdered   peace consultant, Randy Echanis.

The recently appointed (by Duterte) national police chief defends the arrest while the government says it is willing to take care of Echanis’ one-month-old son. 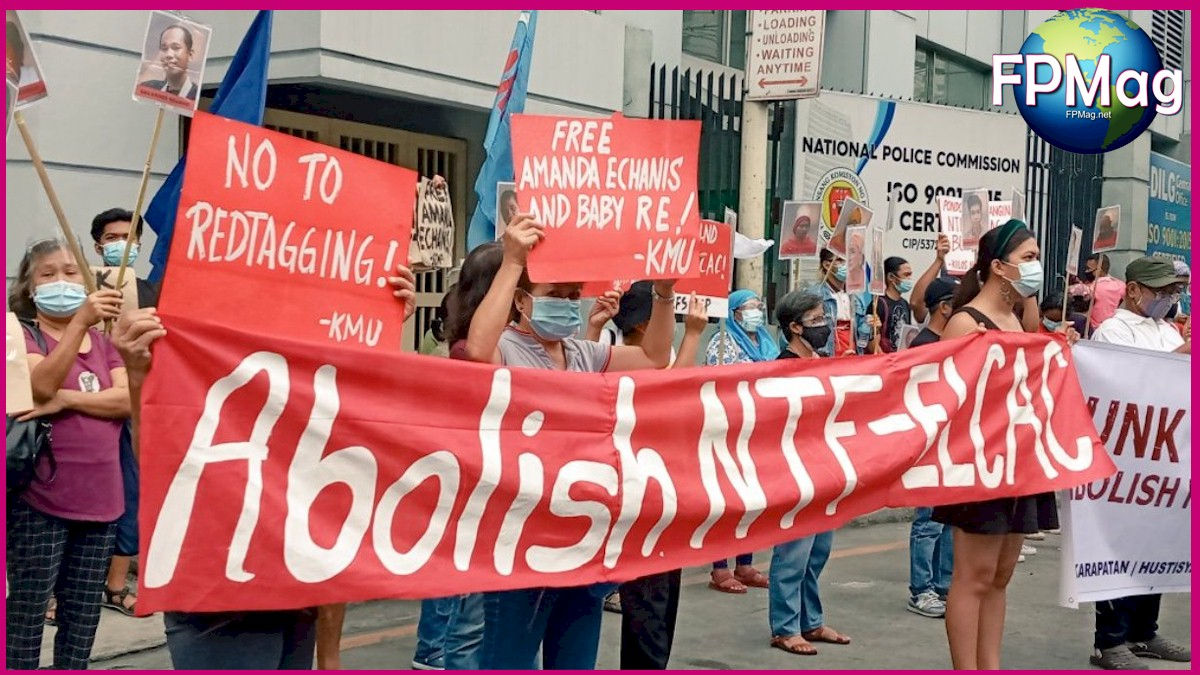 Activists from different sectors gather at the DILG-NAPOLCOM to protest against Executive Order 70 that established the NTF-ELCAC which was signed by Duterte two years ago. Photo Credit: Twitter.

According to an official who did not want to be identified after persistent callbacks, “PhilHealth has now paid the Philippine Red Cross a total of ₱600 million for coronavirus tests of its over ₱1-billion arrears. The Philippines Red Cross had stopped testing for two weeks because it did not have money to buy reagents and other materials to complete testing.”

Hence it appears to be true that officials stole the insurance funds that Filipinos had paid into the system and hence the Philippines Health Insurance appears to be nearing bankruptcy.

At almost three o’clock in the morning, Toronto time, Gloria de Jesus was speaking with her father at home where the clock would show four hours after lunch. Mr. de Jesus was explaining that the arrests were not about taking people into custody but murders and that a senior citizen and his wife, asleep in bed at 3:am were murdered by police. Police claim the elderly couple had “resisted arrest“. Watch:

In this video below, viewers  will see graphic details of the truth about what has happened to women and children in the Philippines under Rodrigo Duterte, in realistic, graphic detail. Warning. Some viewers who experienced these events may find this video triggering.

“The Philippines has Fallen”, a requiem for precious souls lost to Duterte-style Murders. from The RINJ Foundation on Vimeo.

On 17 August 2020, Zara Alvarez, a Negros Island-based Filipino human rights advocate, educator, paralegal and prominent social activist who predominantly campaigned against human rights violations which were witnessed during the administration of Rodrigo Duterte. She was truly much beloved human rights advocate who was gunned down as were others that week. Previous attempts on her life had failed. Roughly one dozen of her Negros Island group have been murdered. 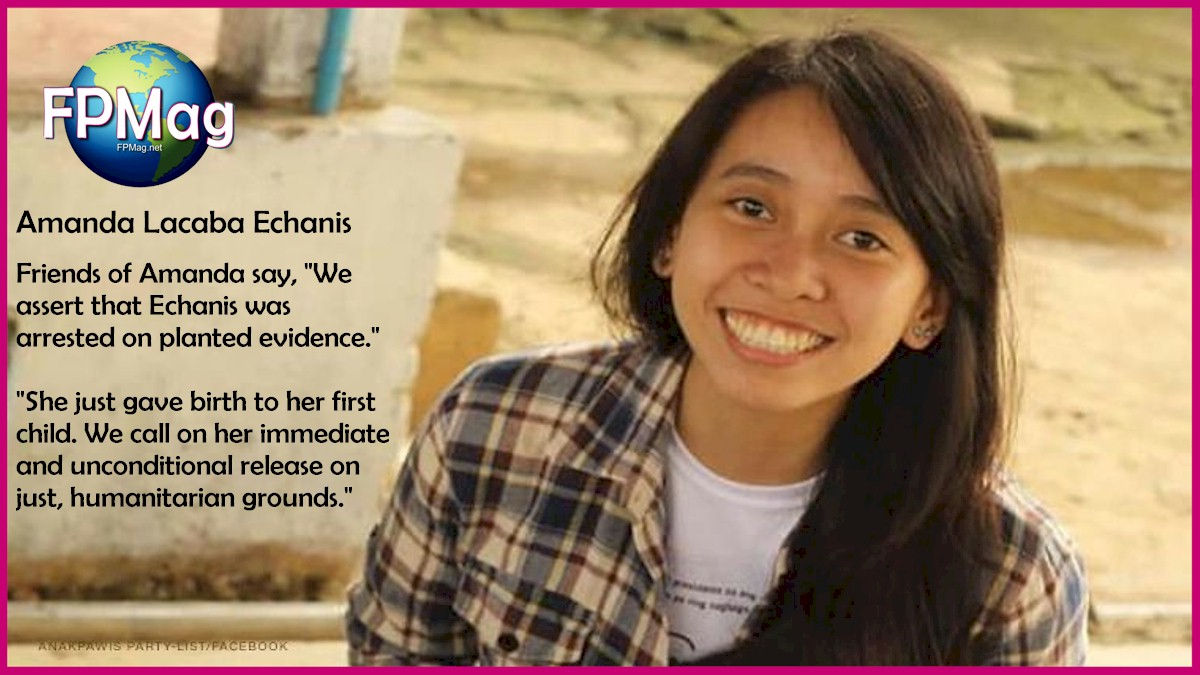 Friends of Amanda say, “We assert that Echanis was arrested on planted evidence.” Duterte’s police say that Amanda had what amounts to a military arsenal hidden under her bed, or in the alternative, somewhere in her home, while she was giving birth and taking care of her baby. Her father had recently been murdered in his bed by the same police force.
“She just gave birth to her first child. We call on her immediate and unconditional release on just, humanitarian grounds.” Photo Credit: Twitter
Art/Cropping/Enhancement: Rosa Yamamoto FPMag

Now a Filipino Dad worries that another women activist will be murdered.

Gloria’s father says that a neighbour is in trouble, receiving death threats, for trying to propose a bill that would end the persecution of women who need an abortion.

“Amid the Covid-19 havoc, here is the bill that I’m finalising to decriminalise abortion in the Philippines,” she wrote in Facebook. “This bill, when passed into law, can save women’s lives.”

“Abortion and divorce remain illegal in the Philippines and women are chattels of their husband and his family,” said Gloria’s father on the phone.

Author’s note: “So what happens to the children of the women whom Duterte’s government kills? Watch. And if you have the time, read some of the comments on YouTube. This is an extraordinary documentary by  Deutsche Welle News (DW News). You may want to pour another tea or pop some popcorn. Once it starts you will be riveted.”  ~ Melissa

DW Documentary 2.26M subscribers
Philippine president Rodrigo Duterte is waging a brutal war on drugs. Thousands of people have already died at the hands of the police, including children. The populist president has ordered the country’s security forces to kill anyone that they think is connected to the drugs trade. Minors have also suffered under the crackdown. Some children have been inadvertently killed during drugs raids, while others have become police targets. Most come from the poorest sections of society. The film makers accompany street children trying to survive on the streets of the capital Manila. They meet adults who are trying to help, but also encounter the forces persecuting the children.