Touring through the region of East Asia and China is US special envoy Stephen Biegun whose diplomacy has been welcomed in South Korea, Japan and also in Beijing.

Chinese Vice Foreign Minister Luo Zhaohui has expressed concern over the potential trouble that could arise from the failed talks between North Korea and the United States. The two countries are still at war since 1953 when a ceasefire was reached.

Despite the hard work in the 1950s by Canadian Prime Minister Lester B. Pearson who tried to broker a formal truce, none was achieved and the Americans brushed off every attempt since.

A humanitarian worker speaking from Pyongyang says she is “worried by past threats from the Supreme Leader Kim Jong-un to conduct a nuclear test in the Pacific Ocean”.

“I am very worried that the Leader is very angry and disappointed at the insults from President Trump calling the Leader a “rocket man” while the Leader [KimJong-un] has tried so hard to use diplomacy the whole country has no longer any faith in the talking [translated],” she added. “We fear a war but some say a war is necessary for getting the people back to selling their goods and having better food and medicine.”

“People are willing to fight America and stop their bullying finally,” says the middle aged woman. 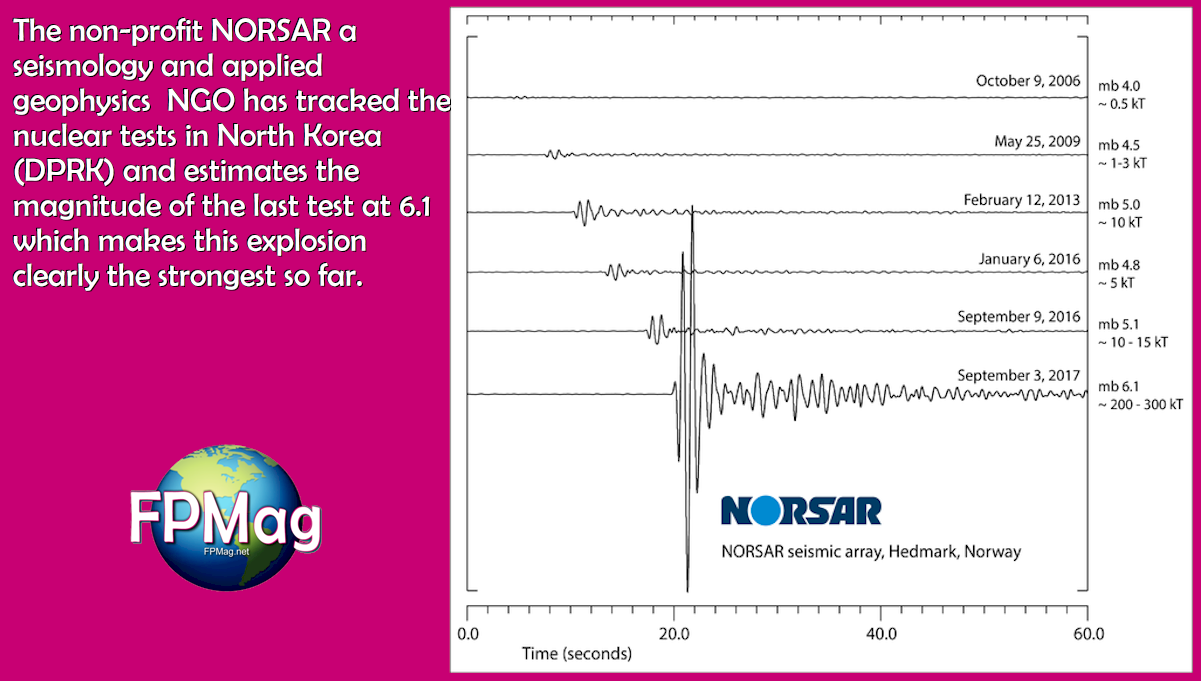 According to the history books, the Pacific is a HOT Nuclear Testing Grounds

France until 1996 was conducting nuclear tests on atoll Mururoa, and its sister atoll Fangataufa,starting in 1966.

America exploded 106 nuclear weapons at the sites in the Marshall Islands and a few other sites in the Pacific Ocean between 1946 and 1962.

How many tests are needed to get the nuclear bomb ready for killing millions?

North Korea has conducted six nuclear tests, in 2006, 2009, 2013, twice in 2016, and in 2017. At least one test may have been a staged Teller–Ulam thermonuclear weapon, an advanced generation of nuclear weapons far more powerful than a simple atomic fission bomb.

For comparison to the United States during the times it was developing its nuclear weapons, the numbers are staggering. The USA detonated 904 nuclear blasts at the Nevada Test Site, 106 at the Pacific Proving Grounds near the Marshall Islands and other locations in the Pacific; 3 took place in the South Atlantic Ocean, and 17 other nuclear test explosions were done in Amchitka Alaska, Colorado, Mississippi, New Mexico and Nevada.

China and Russia Recognize the dangers and also understand the Asian culture wherein the USA under Trump has made colossal insults and missteps that invite disaster.

Russia and China have advanced a remedial concept for North Koreans suffering. It would allow the people of the DPRK to sell their goods through exporting and benefit from those achievements by allowing importation of food and medicine.

The UN High Commissioner for Human Rights wants to do a study on human rights in North Korea but according to FPMag sources, “there is nothing to study, there are no human rights”.

“The UN Security Council led by America is killing  the population of North Korea as it tried to do in 1952/53 when it slaughtered one third of the population of civilians,” says a humanitarian volunteer worker.

Life for the population is extremely difficult, says an FPMag source who has made her way out of the country, and does not want to be identified.

“Deprivation has created a culture of bribery and corruption,” says the woman.

“Officials within regional bureaucracies require bribes,” she added, “before they comply with food distribution, a system that failed decades ago. The world is killing our people who now fight each other for scraps of food and steal  things to help bribe officials.”

This anecdotal account is confirmed by a UN report in the spring of this year. But recent events and the increasing level of frustration in the tone from Pyongyang suggest conditions are much worse now as winter exacerbates a dire emergency.

The report describes “appalling levels of hunger that affects around 10.9 million people – more than 43 per cent of the population – with north-eastern and rural provinces worst-affected”

“The rights to food, health, shelter, work, freedom of movement and liberty are universal and inalienable, but in North Korea they depend primarily on the ability of individuals to bribe State officials”, said UN High Commissioner for Human Rights, Michelle Bachelet, in reaction to that same report.

#NorthKorea: People are trapped in a vicious cycle – they turn to rudimentary markets where they face a host of #HumanRightsViolations in an uncertain legal environment.