In the wake of an Organization for Security and Cooperation in Europe (OSCE) conference on 6 December, the leaders of Russia and Ukraine joined the leaders of France and Germany for talks in Paris on Monday.

The conclusion of the talks on 6 December paved the way for a positive Ukraine/Russia Summit on Monday.

“The future in respect of Ukraine also looks brighter now than it did last year”, said the OSCE Chairperson-in-Office, Miroslav Lajcák on 6 December.

“Hopefully we will see strong political commitment at next week’s Normandy Summit. I am glad we can conclude this Ministerial Council knowing that the OSCE’s political representation on the ground is secure. Here, I want to again congratulate Ambassador Heidi Grau on her appointment as the OSCE Chairperson’s new Special Representative in Ukraine and in the Trilateral Contact Group and to thank Ambassador Martin Sajdik for his dedication these past years.”

Miroslav Lajcák predicted well: The Normandy Summit was a success.

Vladimir Putin, President of the Russian Federation, Vladimir Zelensky, President of Ukraine, the Emmanuel Macron, President of the French Republic, and the Angela Merkel, Chancellor of the Federal Republic of Germany  met in Paris Monday in what has come to be known as  the Normandy format for summits.

According to a statement issued by the Kremlin, Russia and the Ukraine agree to “immediate measures to stabilize the situation in the conflict area“.

According to a joint statement from Russia and Ukraine:

Leading up to the Summit, Donetsk was slightly calmer, but no cigars, yet. 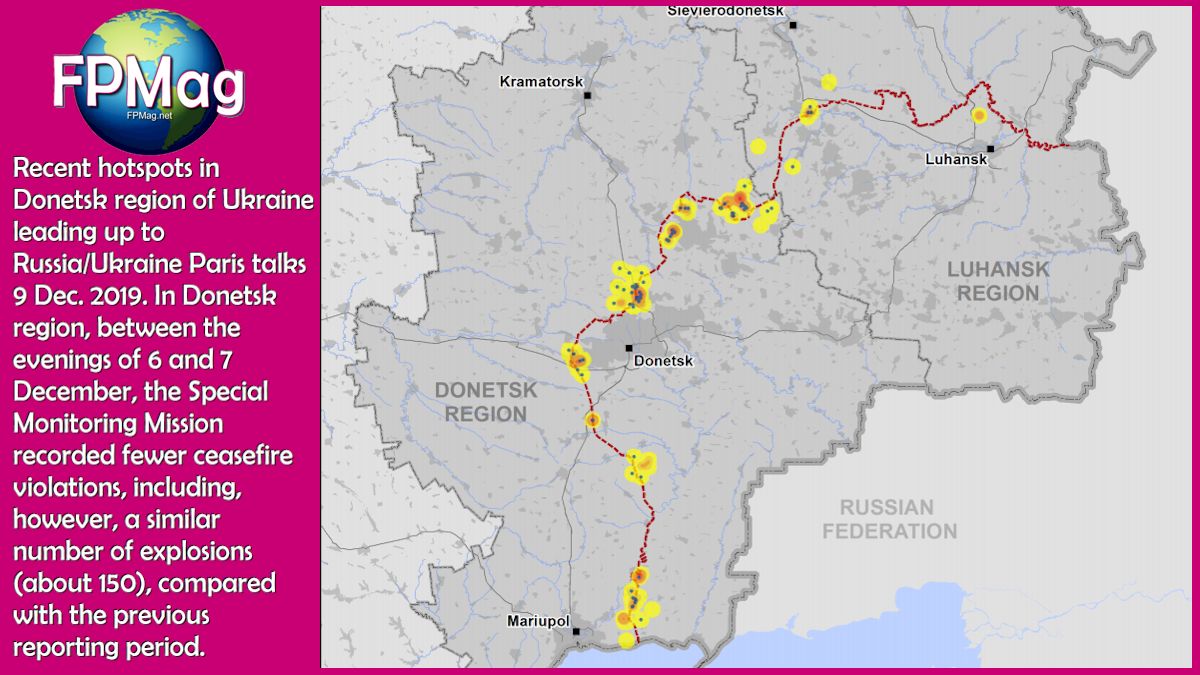 Recent hotspots in Donetsk region of Ukraine leading up to Russia/Ukraine Paris talks 9 Dec. 2019. In Donetsk region, between the evenings of 6 and 7 December, the Special Monitoring Mission (SMM) recorded fewer ceasefire violations, including, however, a similar number of explosions (about 150), compared with the previous reporting period. Read this important report if you wish: 2019-12-09 SMM Daily Report