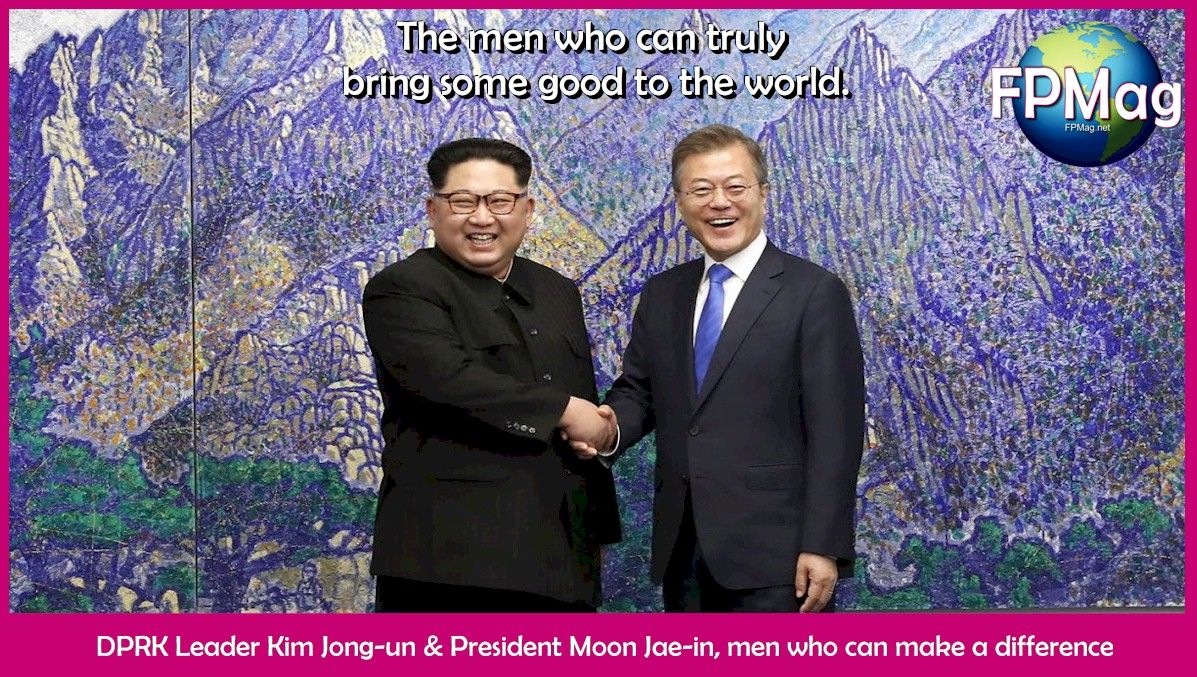 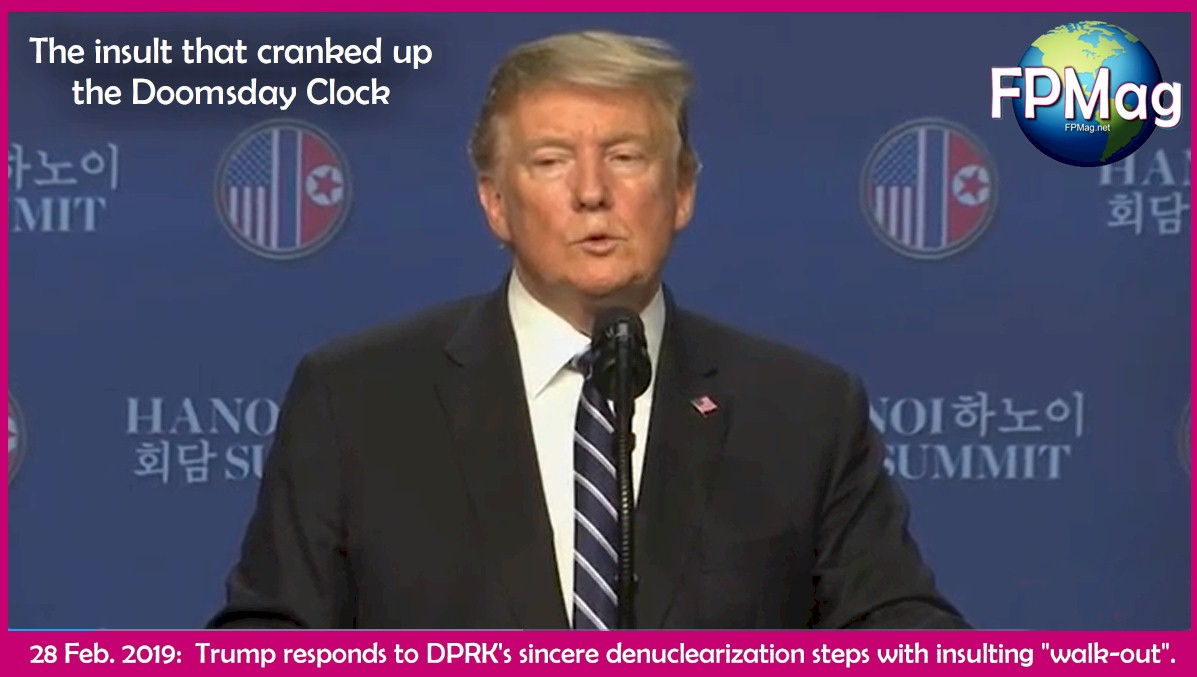 The insult that cranked the Doomsday Clock. Donald Trump abruptly walked out of the Hanoi Summit to insult Chairman Kim Jong-un in front of 25 million of his countrymen. This also has an Asian cultural context that is worse than being spanked with a shoe in Iraq. Photo Credit: Youtube Video Capture, Photo Art: Rosa Yamamoto FPMag

“Voices for Peace” Coalition suggests Mr. Kim not take offence at American ignorance because all sides need to learn more about each other.

Consistent with Asian culture, the Chairman of the Democratic People’s Republic of Korea (DPRK) acts as if he has been insulted, disrespected.

“We have great  hopes for Kim Jong-un taking a global leadership role in nuclear non-proliferation and nuclear disarmament,” says nuclear disarmament advocates who operate a “Voices for Peace” initiative “for all citizens of Earth”.

That was on on 3 December 2019. Since then the United States began an intense air-breathing and space-based surveillance campaign.

In a seemingly quasi-retaliatory move, and according to Baldock, “more about Russian intelligence which reports to the Kremlin that the situation on the Korean peninsula is “awful”,  Russia has sent a warship to the east coastal waters nearby the United States to intensely scan underwater cabling and airwave communications for data and voice communications hoping to learn and anticipate whatever hostilities Trump is planning for a country on Russia’s southern border.”

According to a source in Moscow who does not wish to be identified because she does not have authority to speak for the Kremlin, “The Kremlin is afraid from what is happening at the North Korea site where there has been a buildup of American weapons very near to Russia [which shares a border with the DPRK] and so the President [Vladimir Putin] needs every little amount of advance warning it can find to be prepared for a nuclear fight in East Asia if America and North Korea start to fight war on the Peninsula.”

Also following the unusual comment about a “Christmas Gift”, the DPRK ran some tests on a missile power plant  at the Sohae Satellite Launching Ground on 8 December.

“This should have helped Donald Trump repair his short attention span,” comments Baldock.

The new missile rocket engine according to an FPMag source in Pyongyang is “for a certainty a solid fuel type rocket motor of the kind needed for more advanced intercontinental ballistic missiles”. The source is a woman member of the global civil society group known as RINJ which has been trying to mitigate some of the hardships that women and children peasants in the ‘provinces’ endure in the DPRK as a consequence of “draconian hunger-sanctions” against the population of North Korea”.

Trump claimed he Insulted the DPRK side because he feared what the media would say if he ‘made a deal’. 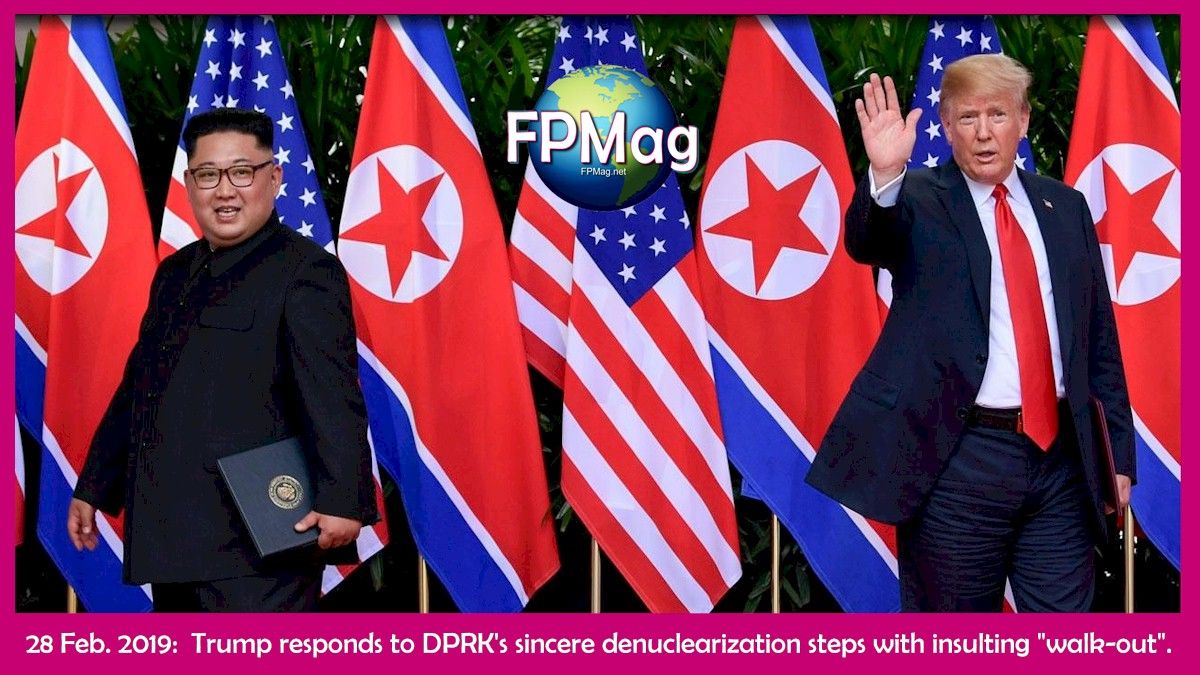 “Sometimes you have to walk,” Trump said to journalists in Hanoi, Vietnam. “I could have signed an agreement today and then you people would have said, ‘oh, what a terrible deal,”’ he added with some gesturing theatrics.

The ‘Voices for Peace‘ project adduces that, “The time has come to take action. Governments around the world are deep into a nuclear arms race and nothing is slowing this down. NPT party states, in particular the nuclear-weapon-states, must begin to fulfil their obligation under the non-proliferation treaty to undertake negotiations on effective measures leading to nuclear disarmament.”

“Nations that possess nuclear weapons seem to want to be part of an exclusive club and use their full inventory of weapons as leverage against other nations, to keep them out of the ‘nuclear club,”  adds Katie Alsop,

“Nuclear nations are bound under the non-proliferation treaty to undertake negotiations on effective measures leading to nuclear disarmament,”  she adds,

“But history shows that the signatories of the NPT have failed thus far,” says the advocate for nuclear disarmament. “Nonetheless we have great  hopes for Kim Jong-un taking a global leadership role in nuclear non-proliferation and nuclear disarmament”.

“Voices for Peace group says, “Nuclear Club has been irresponsible. India and Pakistan need to solve their disputes by asking for outside mediation and then bring the will for peace to the table.”

Talking points of the “Voices for Peace Group“

Will the UNSC finally realize that sanctions as a weapon of war have become monstrous human rights violations, especially in the DPRK?

Three very positive steps have been taken by America, China and Russia.

America has sent a better envoy to South Korea who is reaching out to the North. That person has skillfully approached the conflicted talks with solid and hopefully workable diplomacy.

America has realized its procrastination was wrongful.

Russia has joined China to raise their voices in favour of rewarding the considerable steps the DPRK has taken toward peace.

The Sino-Russian neighbours are jointly advancing some limited sanction-relief that would allow ordinary North Koreans to export some of their product overseas and benefit from their achievements with improved medicines and nutritional foodstuffs. They are otherwise starving and their children suffer severe physical challenges because of the starvation sanctions intended to stop North Korea from acquiring “The Bomb”, which it has already achieved long ago, just like Pakistan, India, Israel and probably Iran has done.

“Few acts of the global community have been more racist and hypocritical than this,” accuses Alsop who feels the UN Security Council has been ‘misguided’ in its Nuclear Club antics, particularly the renewed nuclear arms race.

Author’s commentary note: Pyongyang should accept that the sides have made mistakes but there is a willingness for correction.

There is an opportunity for Mr. Kim to step out on the global stage and do some good for all of humanity, especially his own beloved people. Global nuclear disarmament could be led by President Trump, Chairman Kim, President Xi Jinping and the world’s most experienced statesman, Vladimir Putin.