After what Trump did to screw Ukraine; and during very public condemnation hits Trump is taking from people charged with scrutinizing his conduct, being Donald Trump is less fun. And then Trudeau kicked him while he was down.

Trump likely has no remorse for extorting electioneering-help from Ukraine. That is not in his make up. But Trump apparently and not unexpectedly feels pain over the media play with Trudeau’s smarmy antics.

This is bigger than scoring personal points with a jab at Trump’s back.

Hit Trump and the blowback will come from Vladimir Putin. That will be sudden, unexpected, cold, and it will hurt.

Without the slightest doubt, the Kremlin won the 2016 election for Donald Trump. It continues to do that for the 2020 campaign. Don’t act surprised. Vladimir Putin 110% takes care of his friends. He will also poison to death his enemies and the enemies of his friends in their sleep. 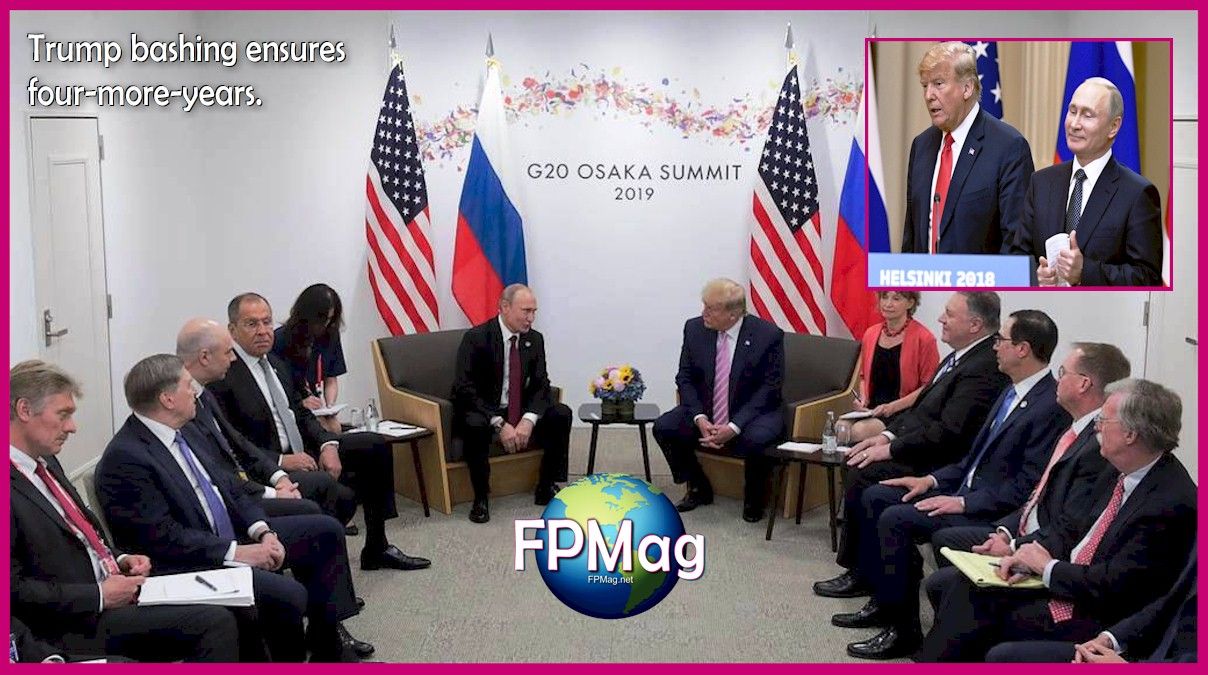 Trump and Putin are close friends. They are pushed together by NATO members who ridicule Trump over his 2% of GDP defence-spending demands. Photo Credit: Tass ~ Photo Art/Cropping/Enhancement: Rosa Yamamoto FPMag

Trump’s 2016 electoral victory was not predicted by anyone outside of Russia.

Russia cleverly plotted a destabilizing move that was intended to shake the United States and create a polycentric global leadership climate.  As a consequence Russia can and has found a better slot as a regional center point and leader, especially in natural gas; and oil to a lesser extent. So far the outcome has only been chaotic but not painful.

Yes, it was a dirty trick but from the perspective of Vladimir Putin, it was a means to bolster a struggling Russia and the struggling political career and legacy of Putin. Politicians do things like that.

America has never been nice to Russia, either. Arguably Trump as US President is a comeuppance.

Trump wanted the win and Putin said he could deliver. What did it cost Trump? Without a doubt, Russia supports Trump and Trump supports Putin.

It’s the best relationship the two nations have ever had. Certainly it is good for the Russian people. They deserve a break.

If only the USA and Russia were friends. They are not but can that change with another four years of Trump in the White House?

Donald Trump was never meant to be President. It’s not a nice job unless it is fitted to a person who loves diplomacy, prefers rigid protocols, and believes in a steadfast adherence to social mores conformity and the rule of law. That’s not Trump. America is in the kybo all around the globe but comfortable at home. That keeps an electorate happy.

This boy who grew up to become President of the United States cannot be a happy person under the circumstances.

Trump endures a complex set of personality quirks that in medical parlance are classified as disorders. That does not make him unique. He is a common occurrence because politics draws these types of disordered personalities like flies. Add used car dealerships, bond sellers, riverboat gamblers and cigar smokers.

People with personality disorders often suffer terrible pain in life because they are not wired correctly hence don’t connect their actions to a correctly anticipated  response. They genuinely don’t feel you. Can’t. They lack empathy. They hurt easily.

That Boris Johnson, Justin Trudeau, Emmanuel Macron and others were ridiculing Trump speaks to who they are and not about Mr. Trump.

I watched Mr. Trump’s lengthy press conference which was more like a fireside chat with the media. It was excellent as a concept of openness. Alarming is the quirk that he contradicted even his own facts all over the place. But most leaders are not about the minutia and more about concepts. The minor details can come from a departmental aide, later. It’s the lies or exaggerations that must stop. It would have been nice to have said that to Winston Churchill too. The guy was inspirational but his lies were whoppers. Really. Trumpism is nothing new.

More importantly, Trump’s open discussions with the media are refreshing to his followers. To the media, that’s how all politicians should be. Trump’s candid delivery of what’s going on in his mind are lessons for Trudeau whose stiltedly stage managed performances are not credible and in fact, boring.

Trudeau screwed up immeasurably. That may not be news, but that is the reality of this weekend past.

Impeaching Trump may not work.

After this weekend I see what 50% of Americans are cheering about. Trump talks to his constituents regularly in language they understand. It’s different—unpolished but for those Americans, a diamond no less. and that will win an election—a majority maybe?

The US (Republican-majority) Senate will toss the whole impeachment process into the garbage heap but not before using ridicule and division against the Democrats to win the 2020 election for Trump, with a little help from Russia. Not Ukraine, stupid.

.@JustinTrudeau, @EmmanuelMacron, @BorisJohnson and other VIPs shared a few words at a Buckingham Palace reception Tuesday. No one mentions @realDonaldTrump by name, but they seem to be discussing his lengthy impromptu press conferences from earlier in the day. (Video: Host Pool) pic.twitter.com/dVgj48rpOP

….Just finished meetings with Turkey and Germany. Heading to a meeting now with those countries that have met their 2% GOALS, followed by meetings with Denmark and Italy….