“When government becomes the enemy of the people, and not its agent to the world and policymaker for the people, as in the case of Iran, the state guns down peaceful protests. Today we must change our tactics to live another day.”

These words were shouted to a group of Iranians heading out on a march yesterday by a woman rights defender with a strong voice.

“In Iran’s case, now, the fight for the safety of women and children must take to the streets,” says Monique Deslaurier, a human rights activist with a global civil society women’s group.

According to Deslaurier, a RINJ women’s group feminist, “our group insists that peaceful assembly is a bedrock of democratic institutions. It allows people to bring attention to issues, demand change, and get answers from  public officials. Without freedom of assembly, there are fewer channels between elections for  people to use information and opportunities for participation in open government.”

“All governments,” she adds, “have a duty to respect, protect, and promote freedom of
assembly. And civil society will hold those non-abiding governments to task.”

“But in Iran, police in riot gear were handed flowers. Those same police opened fire with live ammunition against unarmed protestors.” 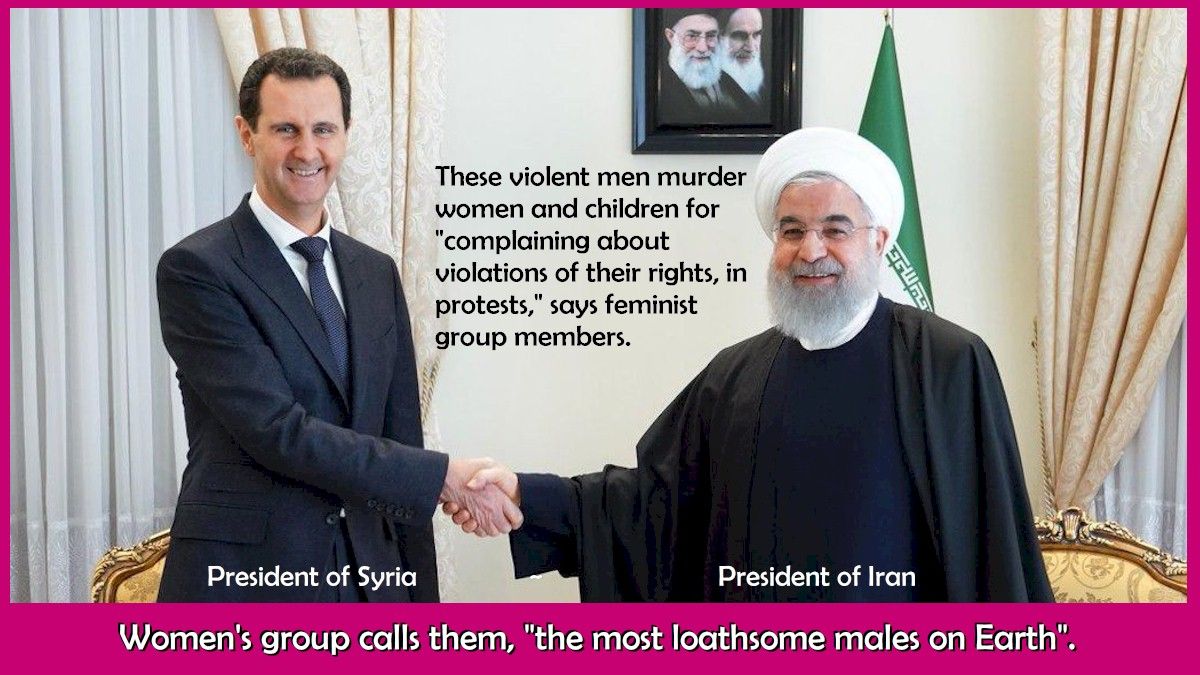 The picture and its story: Tehran, Iran—25 February 2019. Syrian President Bashar Assad during a working visit to Tehran on 25 February to meet with Iranian President Hassan Rouhani, says the press service SANA of the Syrian President. These violent men murder women and children for “complaining about violations of their rights, in protests,” says a feminist group’s members.

People have the  right to peacefully protest and assemble.

“This violent treatment of gentle, soft protest was seen in Syria years ago when Bashar al-Assad began killing women and children here, thinking they were the chattels of the men running his Opposition,” notes Gracie Edwards, a civil society humanitarian working for The RINJ Foundation in Idlib, Syria where Bashar al-Assad has long ago worn out the shock of outright slaughtering civilians so he is bombing and blasting at children’s hospitals. Literally.

“Assad started small, said the Syrian-born nurse who became a Canadian when she was three.

“A few murders here and there until the numbers reached a couple hundred by day’s end. Today after many years the numbers are pushing towards a million here say some guessers,” adds Edwards. “Is that where these b******s in Iran are going? Rise up, people.“

“Nobody knows where all the bodies are buried and the nation of Syria is in such rubble and chaos there is no census and no orderly collection of birth/death data to comprise medical statistics and actuaries. It’s Hell on Earth,” says Edwards.

Is Iran becoming a new Syria: “Hell on Earth”

Since #IranProtests started, #Iran ???? regime has:

Where IS Iran going with this?

Warning: Details are sketchy in the video but this is an outright murder of a demonstrator chased away from their group. Source supplied.

Last week, FPMag using usual methods was not able to contact a RINJ Foundation member and well-placed source of information in Tehran.

Ed.: A teen intern helping editorial staff of FPMag doing social media liaisons and setting up contact appointments is credited in this instance by a civil society NGO with saving lives. Salute to her and all interns.

Once the alarm was raised, through the source’s organisation administration, a trusted person was sent to the family’s back door (using a coded greeting by prior arrangement) on the weekend with a peer-to-peer communication device, some food, medicine, clothing and water.

The supplies were all needed according to the courier. Her message back was that she fears to speak to anyone as there is an infrastructure of oppression inside government that reports anyone who has food, fuel, money or “extras” within the bureaucracy where she works. She said she has seen trucks with antenna patrolling urban areas and that there is no internet and only sparse phone service to certain allowed numbers. She had in early fall received some internal messenger-delivered funds and supplies from her NGO to assist her family. She feared somehow this had brought attention from a neighbour and put her in jeopardy.

It is unverifiable what she wrote on a piece of paper that reached FPMag  but she claims, as an insider, thousands of protesters and related civilians (family members of protesters who may not have been involved in demonstrations) have been killed or have vanished all across the country, “or they have been [sic] disappeared“. (That same brave women is now being treated for shock in a safe place, surrounded by her family.)

Iran via various means has confirmed “Shoot to Kill Order”

Hours ago, Iran’s Islamic Regime of Sayyid Ali Hosseini Khamenei, the Supreme Leader of Iran admitted that state controlled military forces were murdering peaceful Iranian demonstrators, some of whom who were reportedly killed in Mahshahr where both sides of the story sound too fantastic to report without verification.

The demonstrators say they are protesting against enormous increases in petrol but at the same time, they say they are hungry. Literally, hungry.

The Iranian economy is under a stranglehold of starvation sanctions from the United States since Donald Trump withdrew from the JCPOA Iran Nuclear Deal and imposed draconian sanctions against Iranians.

“The USA is starving Iranians and preventing medicine shipments and health care from reaching Iran’s chronically ill,” says Behar Abbasi who at times sounds like a one-woman protest march against what she describes as “The intrusive America Hegemon“.

“America has no credibility in anything it says about this crisis. It’s intentions and its meddling only kills women and children. Two are doing the fight. Both American and Iranian patriarch governments are fighting and they are both to blame for the harm that has fallen to the ordinary Iranian people.”

“Yes, the people of Iran are in the streets,” says Behar Abbasi from Yemen where recently, Iranian workers have been looking for work from the various humanitarian NGOs trying to stopgap the death rate in that country. Abbasi is a nurse practitioner also with the RINJ Foundation.

“To be fair, says Edwards in Syria, Iran’s government is worse than ISIS. It did things with nuclear bomb plans that brought shame and disgust to Iran. We are against any nuclear weapons made by anyone. And that includes Iran and America, the two sides that are killing Iranians”

Women are both leading and supporting the protesters. Our courageous sisters encourage people to protest and rebel, and lead the protesting units. #IranProtests #Iran pic.twitter.com/Qc36wT2bWw

When #Iran security forces handed over Hamid Rasouli’s dead body to his family, they had two demands: Pay nearly $8,000, and say your son was a member of the Basij and was killed by protesters. My latest on #IranProtests https://t.co/f1zxKWOqNO

In a quick decision, a small group of civil society organizers believed to have been exposed to the government of Iranian President Rouhani were extracted from Iran via a route near Sulaymaniyah, Iraq.

According to Monique Deslauriers, an American worker with the women’s group, RINJ, she has traveled with the evacuees and, supported by a small group of ordinary Iraqi men as a recommended security precaution, already made contact with the  remaining organizers in a location south of Tehran.

Monique says the women’s group continues to organize passive protests but will now “actively strive to disable any infrastructure devices of the violent President Rouhani that are used to kill Iranians.”

“We teach and support this and other methods of self defence,” she added. It’s better that protests are conducted in areas where government killers have no high overwatch and limited access with cameras and weapons.

Deslaurier says that communication vehicles and towers at buildings in smaller cities will be key targets of a campaign to minimize the ability of “storm troopers” locating protesters of which women have made up the bulk.

“Self defence includes all reasonable measures to prevent these people from killing us,” she added.

Her suggestion to protesters is something like this (allow for translation):