The world knows US Federal indictments and the Congressional testimony of reliable witnesses affirm that a number of things happened to controvert the 2016 election of American television reality show star Donald Trump.

US Federal Indictments against many Russians imply that millions of Kremlin dollars were spent weekly plus daily efforts of Russian security intelligence agencies altogether achieved the illegal result of electing Donald Trump in 2016. 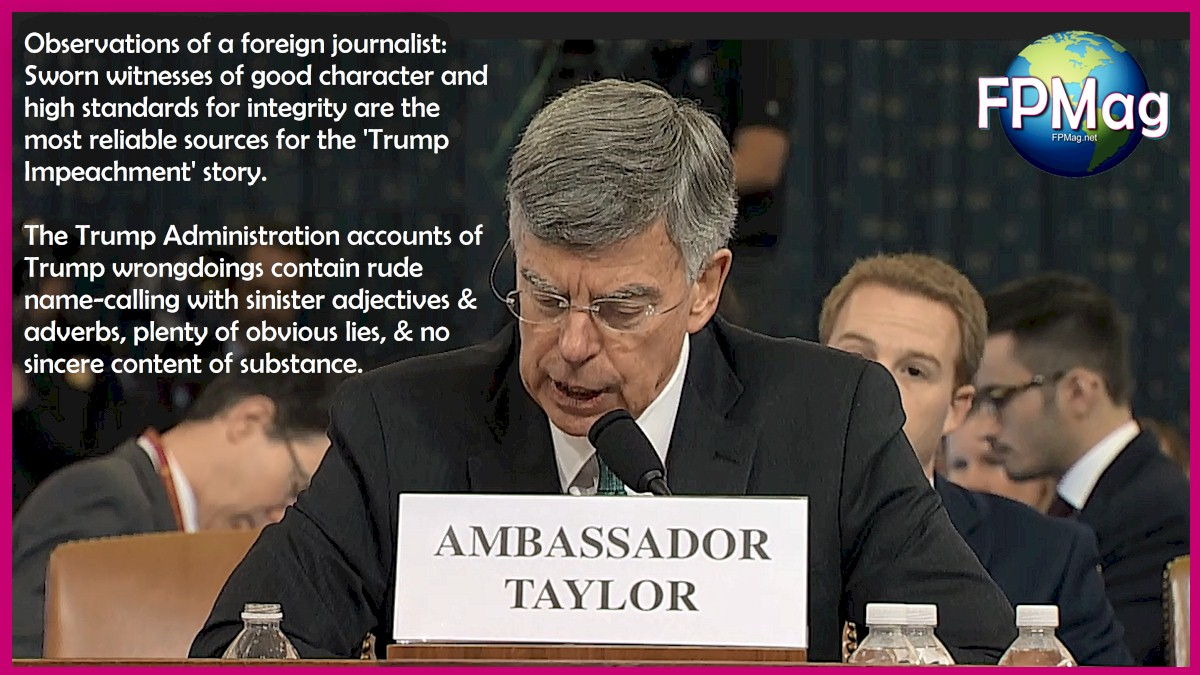 The picture and its story: Observations of a foreign journalist:
Sworn witnesses of good character and high standards for integrity are the most reliable sources for the ‘Trump Impeachment’ story.

Conversely the Trump Administration accounts of Trump wrongdoings are nothing more than obfuscations that contain rude name-calling with sinister adjectives and adverbs, plenty of obvious lies, and no sincere content of substance.

Joe Biden is currently a candidate for the Democrat Party’s nomination process.

Biden, the former US Vice President to Barrack Obama, is the most feared obstacle to Donald Trump for his 2020 reelection.

Hunter Biden is the lawyer son of former VP Joseph Biden. His name has entered headlines in the recent past because he became a board member for a significant global holdings company with property companies in the energy exploration and production fields. That company is Burisma Holdings Ltd.

Lawyers for FPMag explained that companies in the Ukraine and around the world must have a number of “board members from a minimum to a maximum set by each nation for its corporations or by the corporations themselves in their ‘Articles of Incorporation’, a document setting out specifics of the corporate limited liabilities of the LLC”.

In Canada, for example, FPMag was told in a phone call to Corporations Canada which is a subsidiary of Innovation, Science and Economic Development Canada, that “When a minimum and maximum number of directors is chosen, the precise number of directors to be elected can be established from time to time by ordinary resolution of the members. The members can also delegate this power to the directors. Generally, a corporation must have at least one director.”

In the Ukraine, translated and paraphrased, ‘Directors may be individuals or corporate entities, and be of any nationality. Foreign nationals may only be a director if they hold a valid Ukrainian work permit,’ says the web site of the equivalent government agency in the Ukraine.

“Board members are generally not active in the company except the CEO and maybe CFO and are often selected for skills outside the corporation’s business focus.

“If a company makes grapple grommets it already has grapple grommet experts but may need Directors with business or legal or both expertise. This could include directors having special understandings of how law and politics work in customer nations. Companies do this to have readily available advice from someone who knows the company culture and products who also knows the customer nations’ culture and best practices for doing business.

“In the case of Hunter Biden, a lawyer son of a US Vice President, he would be a perfect candidate for Board Member if he showed that his father’s career had exposed him to special learning of ‘business culture and best practices for doing business’.”

“Mr. Hunter Biden would also likely know [which] are the key associations and organizations that set standards for business agreements and practices,” summarizes what two lawyers FPMag queried.

FPMag was also told that “opinions vary on how to construct a Board of Directors depending on the nature of the business”.

Hunter Biden’s Directorship occurred mostly outside the time in which his father served in government, from 2014 to 2019.

If Hunter Biden was getting help from the White House to favour Burisma Holdings Ltd., it mostly would have been the Trump administration in the past three years of his tenure. There is no evidence to suggest that Hunter Biden did any such thing regardless of who was in the White House.

Reportedly, no amount of critique exposed any kind of wrongdoing on the part of Hunter Biden or his father. Public records in 2014 suggest that there may have been some distance between Joe Biden and his son during a busy time in both their lives but also because of family tragedy.

Medical Doctor Buni in Syria’s war zones has endless experience in family grief counseling. She tells FPMag that, “This is a family that has endured terrible tragedy with family losses caused by accidental death in a car accident plus a tragic death owing to incurable cancer.”

“Sometimes no amount of counseling can save families from enduring grief that can even cause rifts between the remaining family members because each encounter is a reminder of each other’s intense pain-of-loss.”

“I can see that happening to the Bidens,” the doctor added.  “It’s a case that should bring a tear to the eyes of a normal person and a willingness to mitigate their pain, not add to their grief as we see black hearts doing in Washington DC,” said the kindhearted doctor in a scolding tone.

The senior Biden is quoted saying that at one point in 2014, the Vice President called his son and criticized his accepting a directorship in the Burisma Holdings Ltd. Board which was summed up with the statement, “I hope you know what the hell you are doing?” And the son answered affirmatively.

Trump denies all allegations while he continues to claim Ukraine fiddled the American 2016 Election, despite several indictments against Russian entities and Russian defendants that say exactly the opposite. Trump is basically mounting the defence of the accused saying they did not do the crimes the US Federal Courts are in the process of hearing.

Donald Trump is diagnosed publicly by many mental health experts as an habitual liar hence FPMag relies on recent sworn testimony of witnesses to Trump’s actions.  But the factual information from over a dozen credible witnesses tell  a truthful story that is compelling.

Russia’s interest in all this is the disabling of NATO and the destabilization of the United States of America.

Russia has succeeded in at least the latter objective of destabilizing America and its relationship with the rest of the world.

The former goal of disabling NATO is close to being achieved.

Trump has lived up to Russia’s expectations.